After a couple of days on the ‘far’ end of the Cinque Terre, staying in Vernazza, we loaded up our backpacks and headed to Manarola – just two stops away on the train.

The arrival into the village itself is a bit strange, going through a long tunnel that emerges out in front of a bunch of restaurants. If you go left, you head down towards the harbour; right taking you up into the mountains. 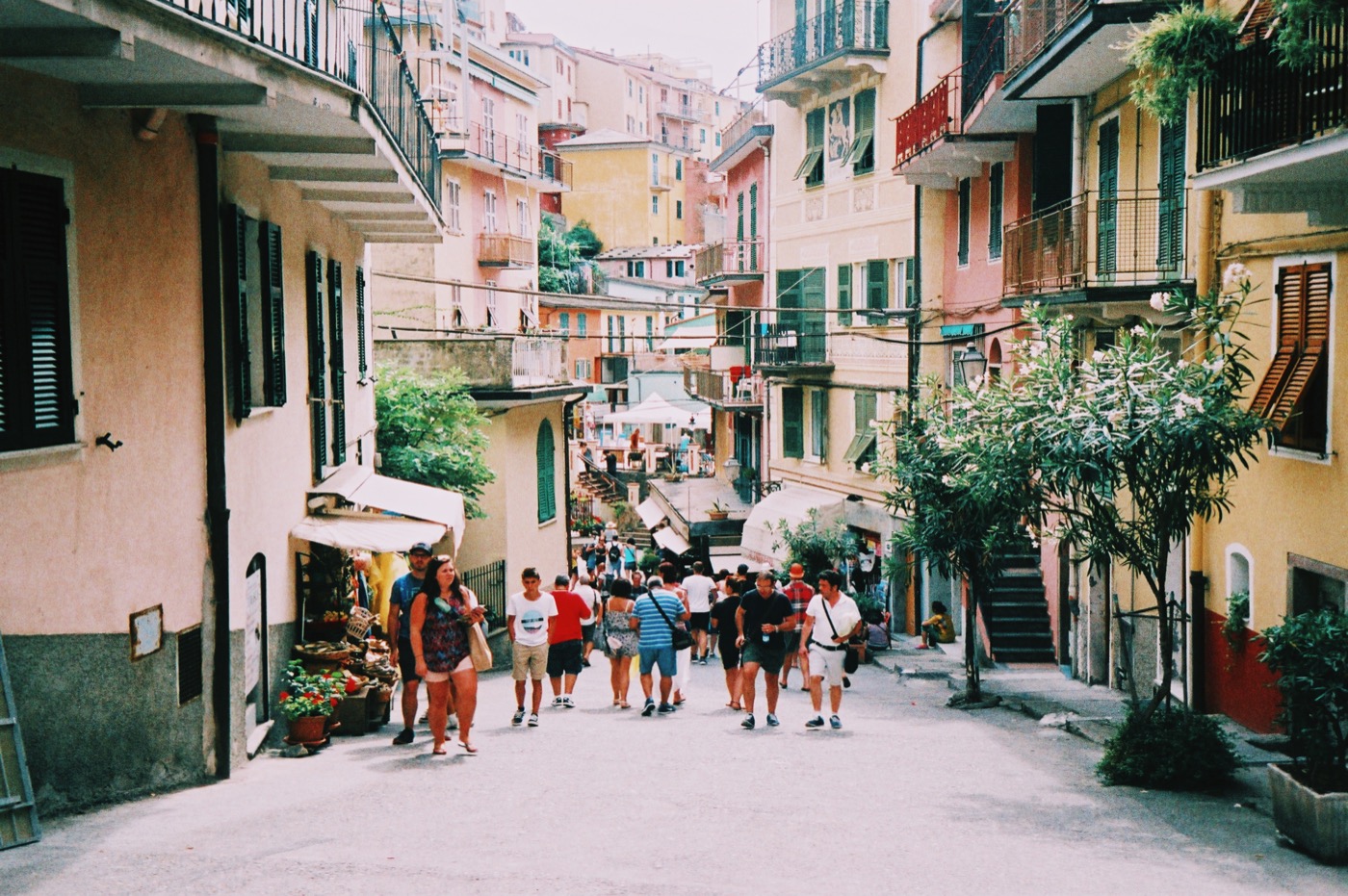 The actual village itself seemed maybe just slightly bigger in terms of the shops and things that were available in Vernazza, but the layout – snaking up the hillside with interesting little squares – made for a far less cramped, breathable space. It felt much more natural. We were lucky enough to bump into a brass band in one of these squares one night, with no tourists left around. 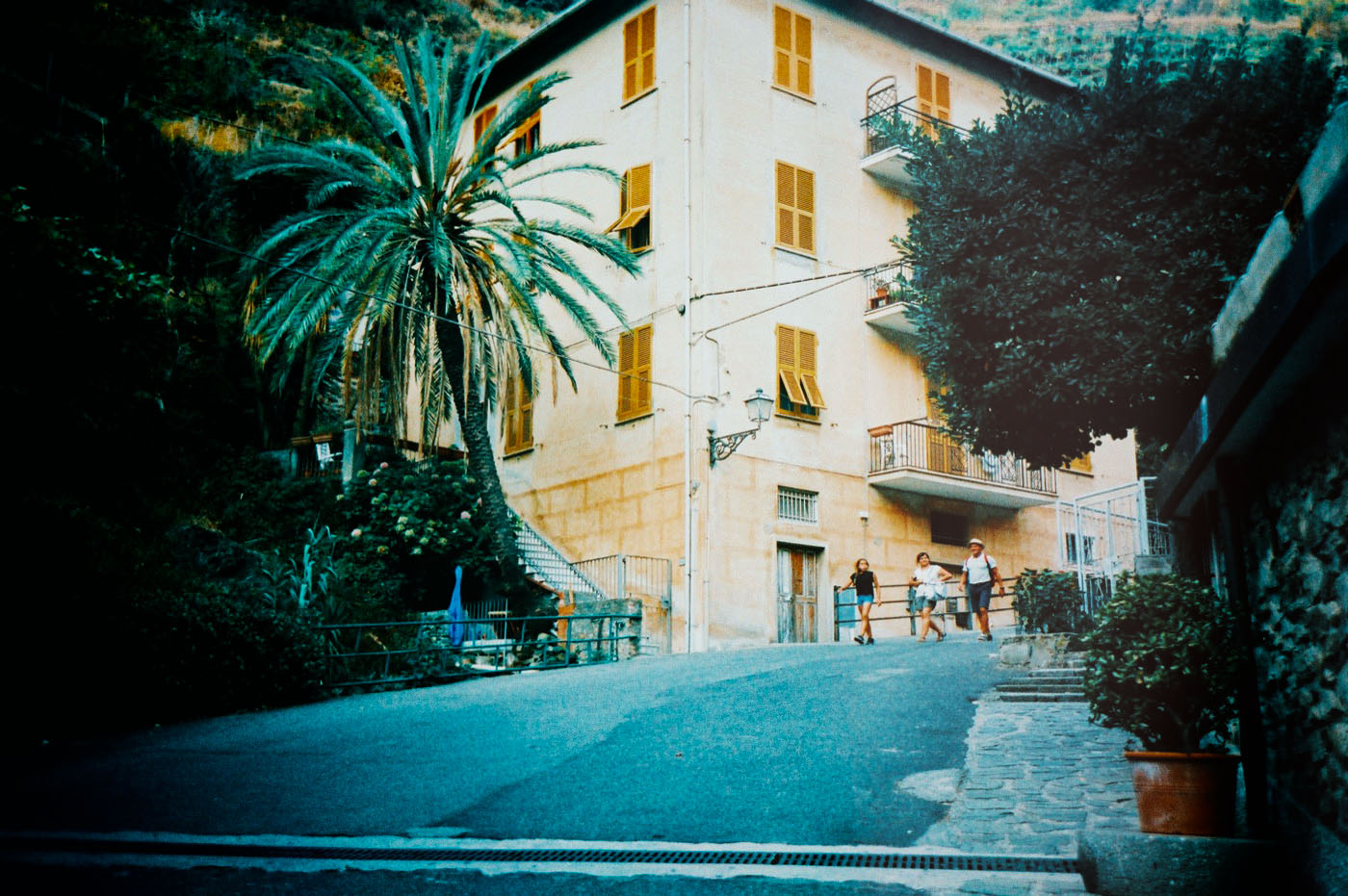 I loved how everybody in this area would spend time just standing on their balconies, looking out over the streets. 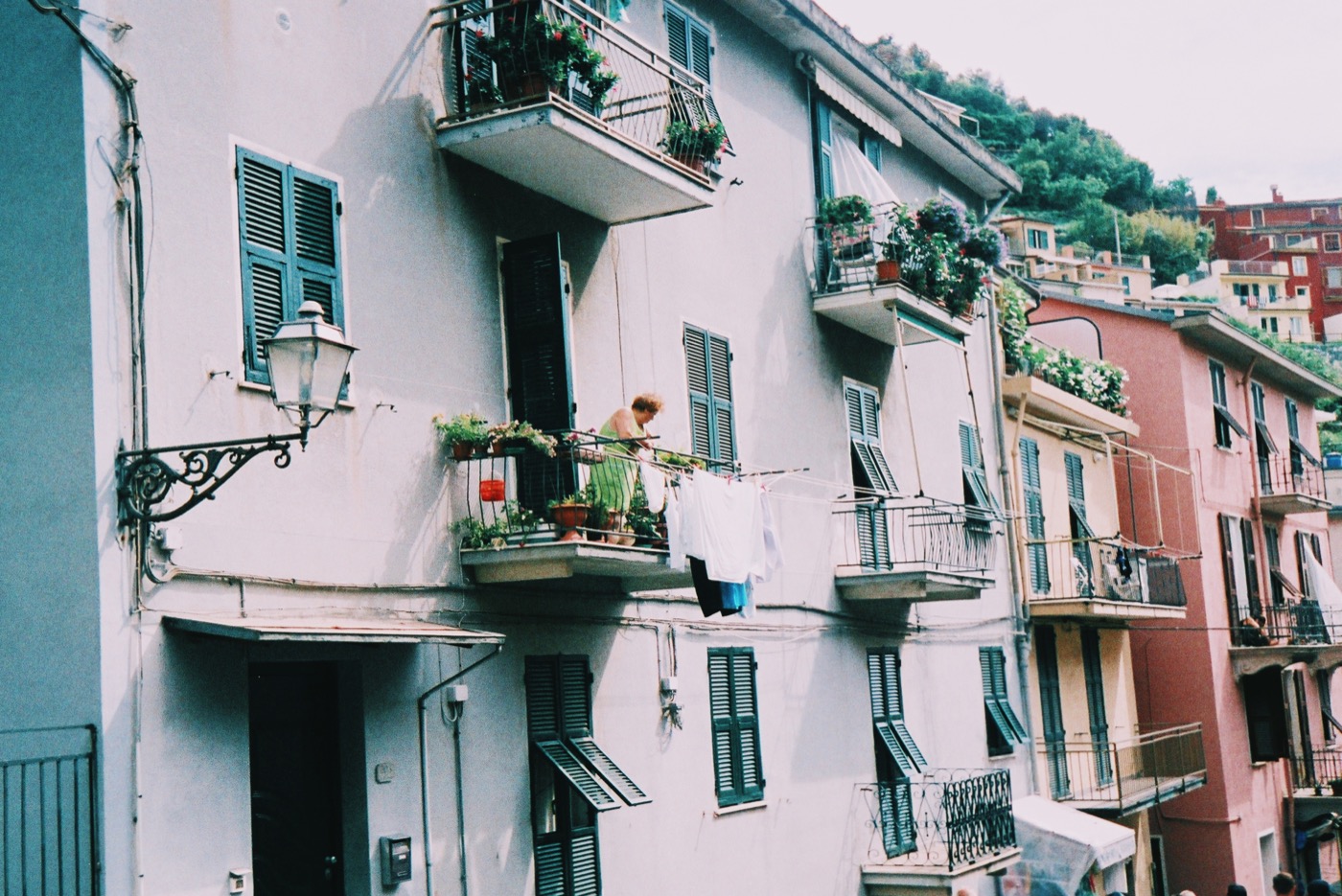 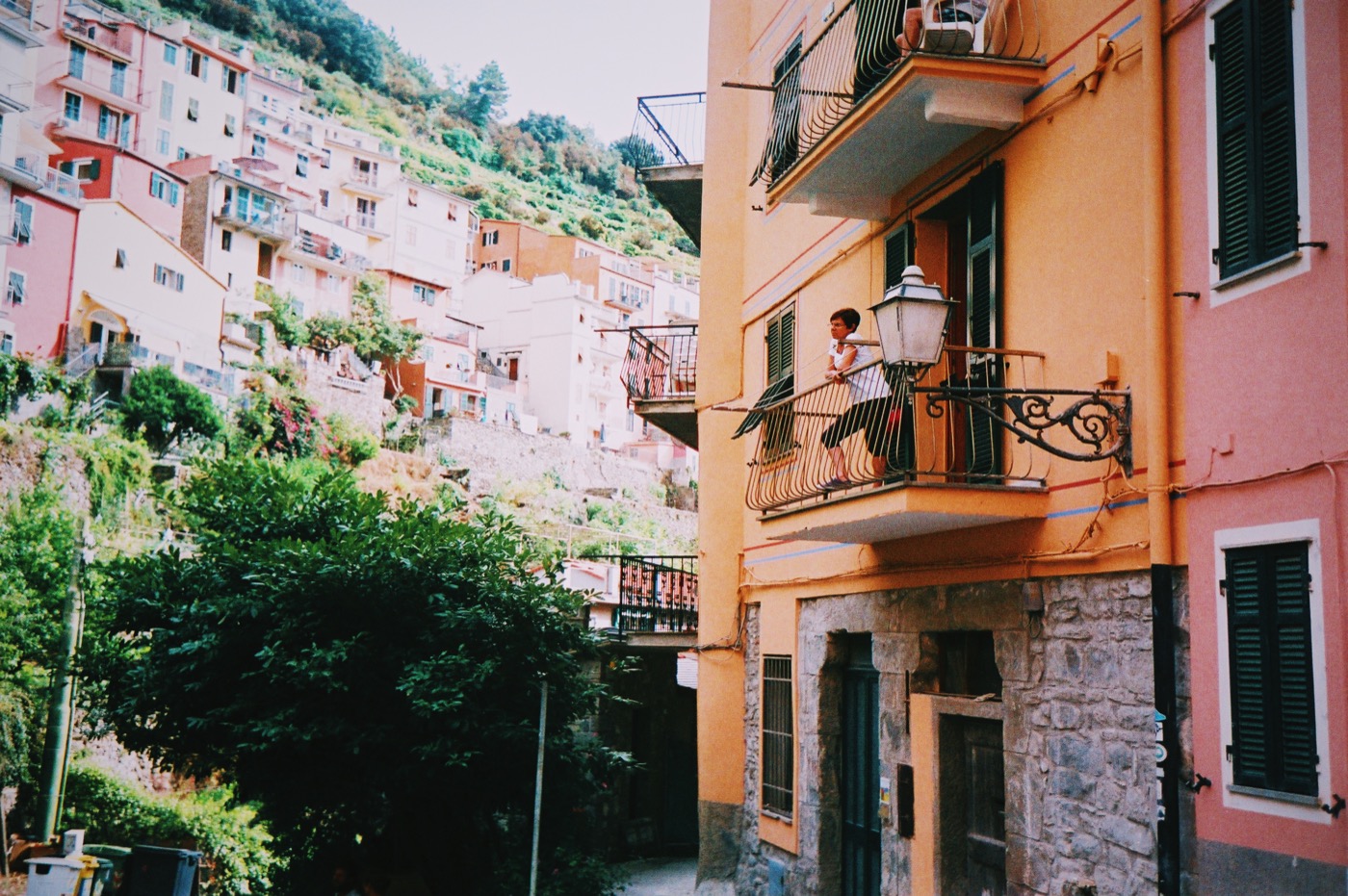 The real highlight of Manarola was the AirBnB that we ended up staying in. It was a bit of a trek to get to – trailing up to one of the highest points in the village – and at one point I thought Grace might be about to strangle me for booking it.

But man, was it worth it.

The panoramic view was just amazing. Click through on the above for a larger image. 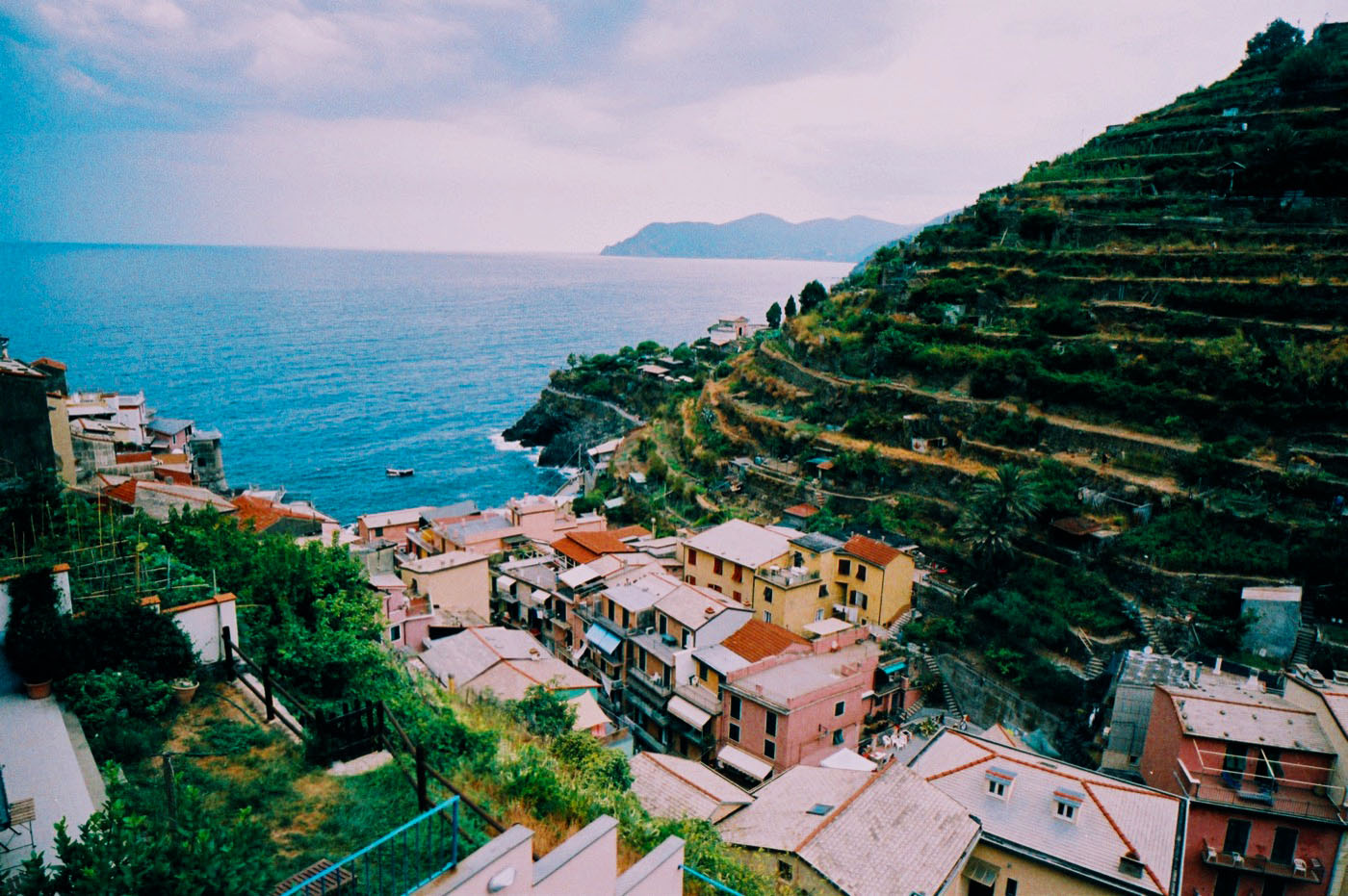 The best bit though, was the rooftop terrace, where we spent a fair bit of time. 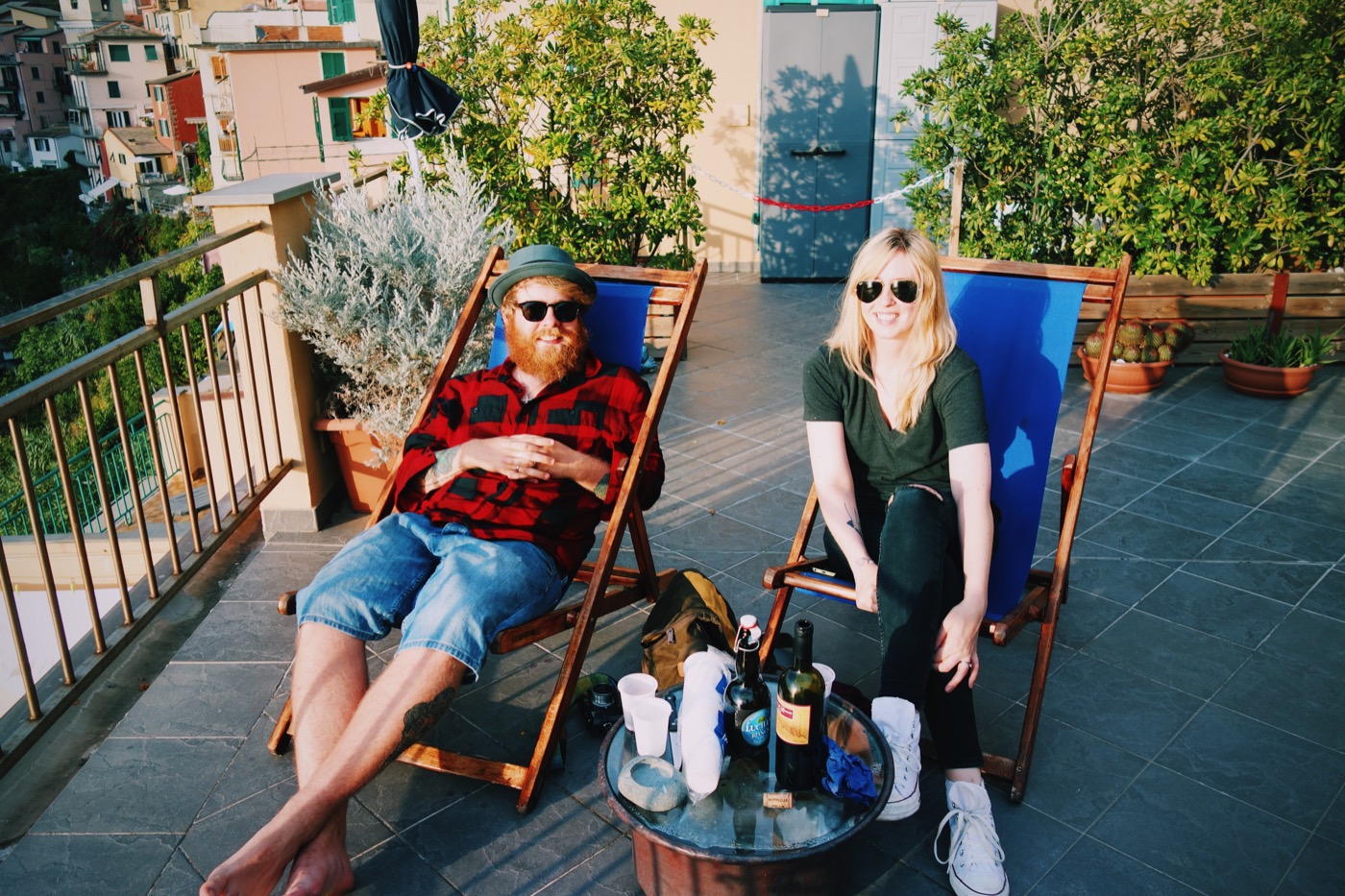 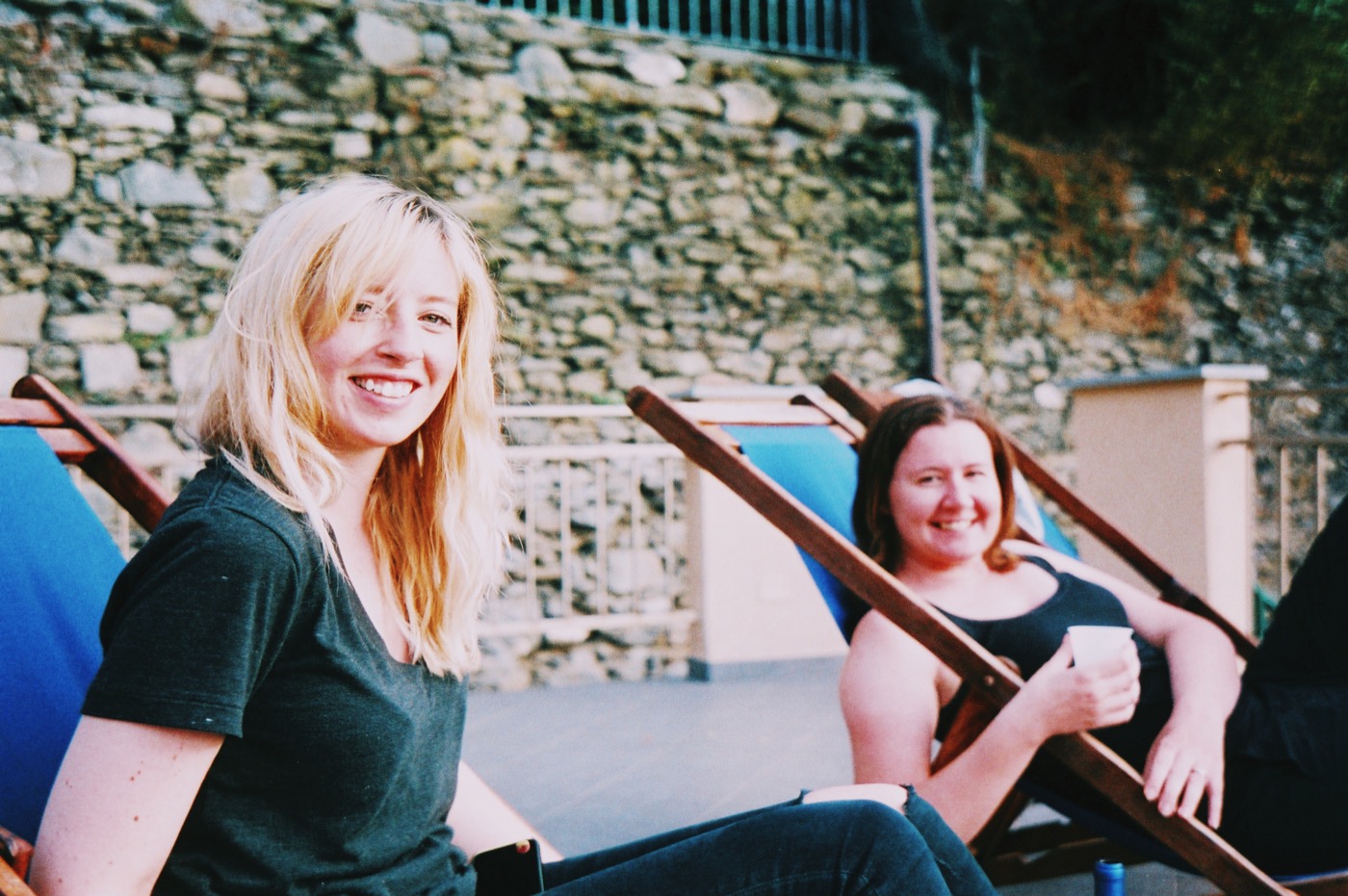 Including watching the sun go down. 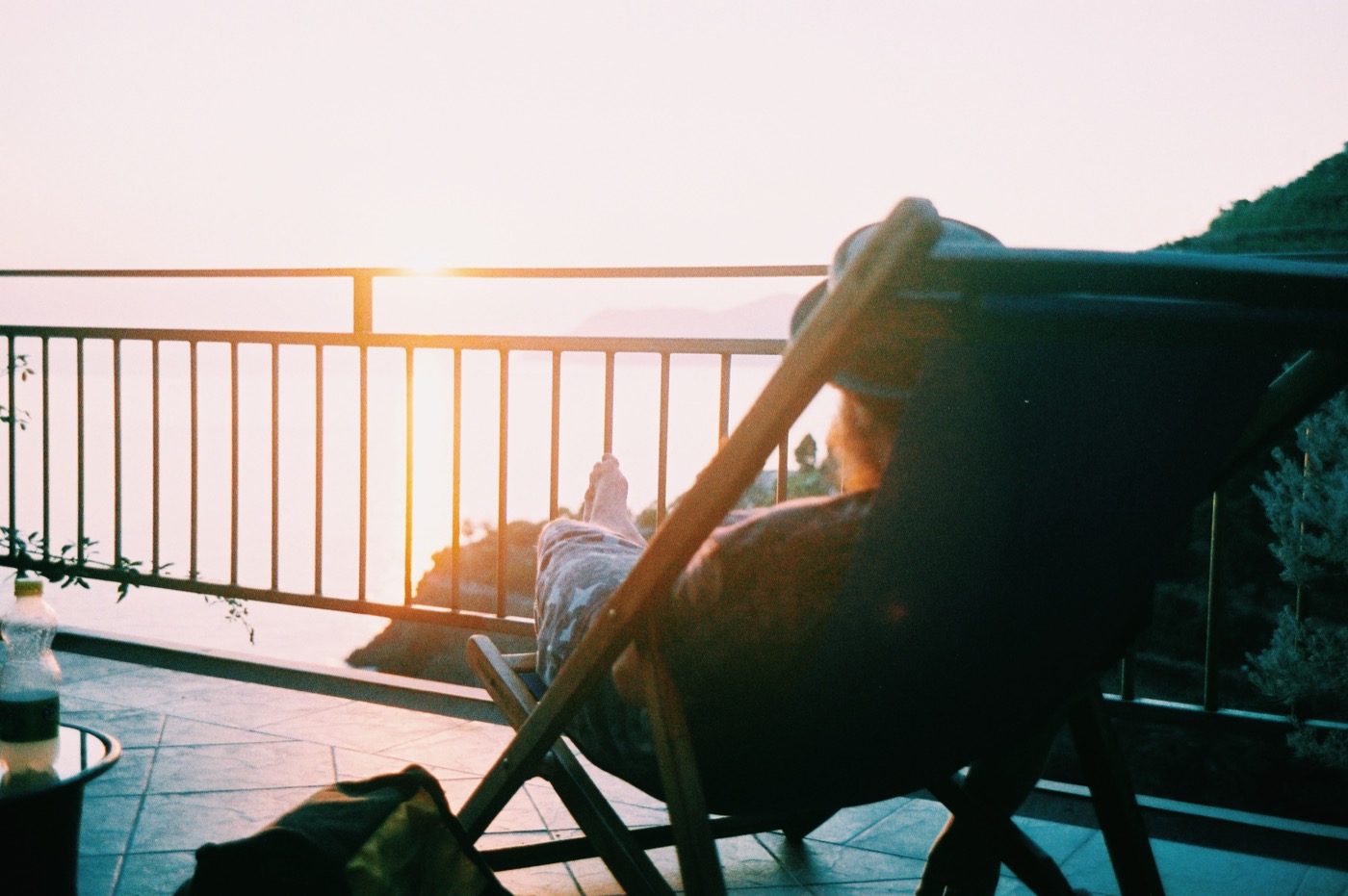 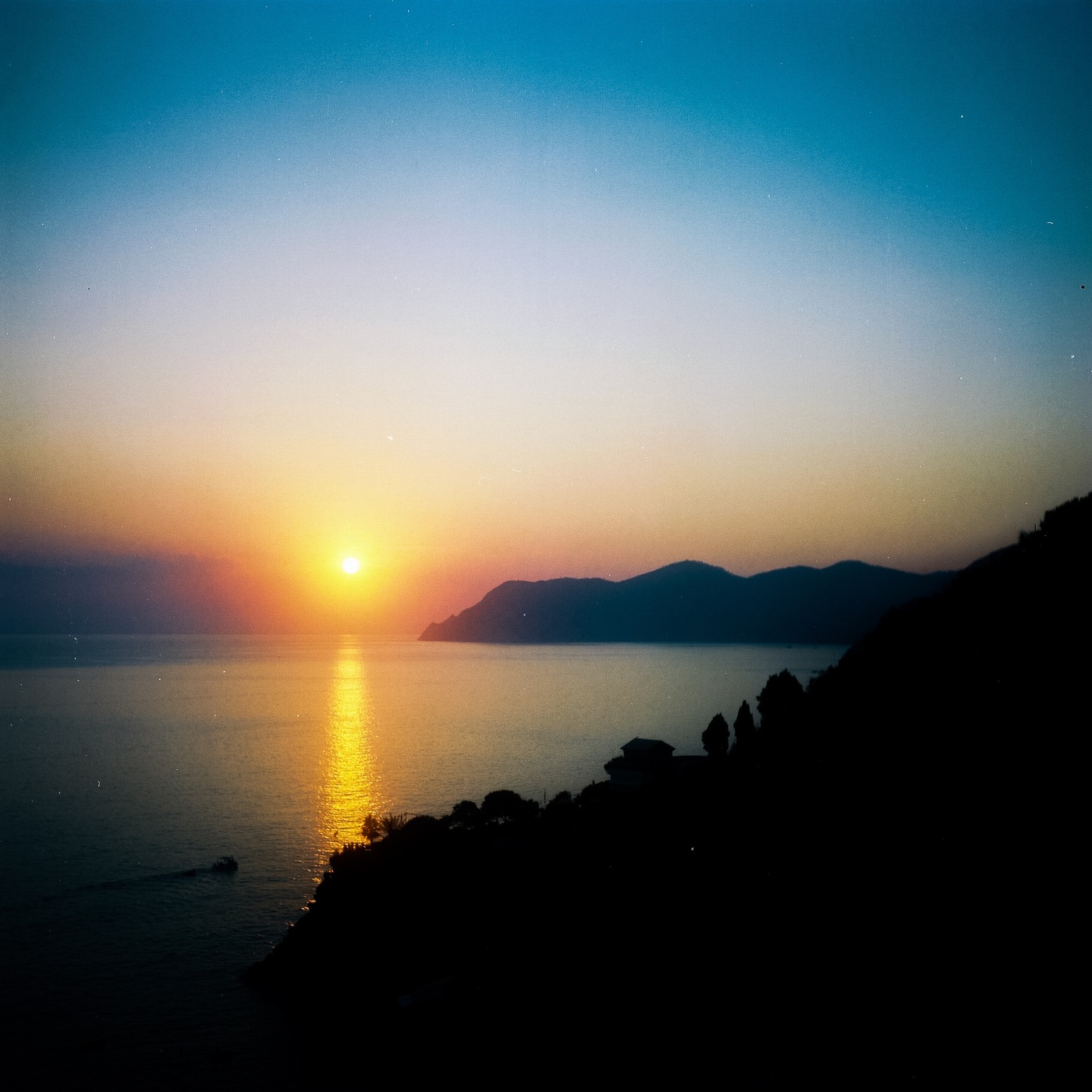 We had some particularly good food here as well, at a seafood place called Billy’s which was just a few doors along from our terrace bliss. We had the anchovies, which were from just along in Monterosso… and let me tell you something, the village itself might not be all that exciting, but the anchovies were incredible. Forget everything you think you know about those weird wee fish until you’ve tried these. They melted away like some sort of pate covered in lemon sauce. Amazing.

Onto the harbour. The sea was too rough the day we arrived, but it died down by the next day, so we went for a swim before heading to Riomaggiore. 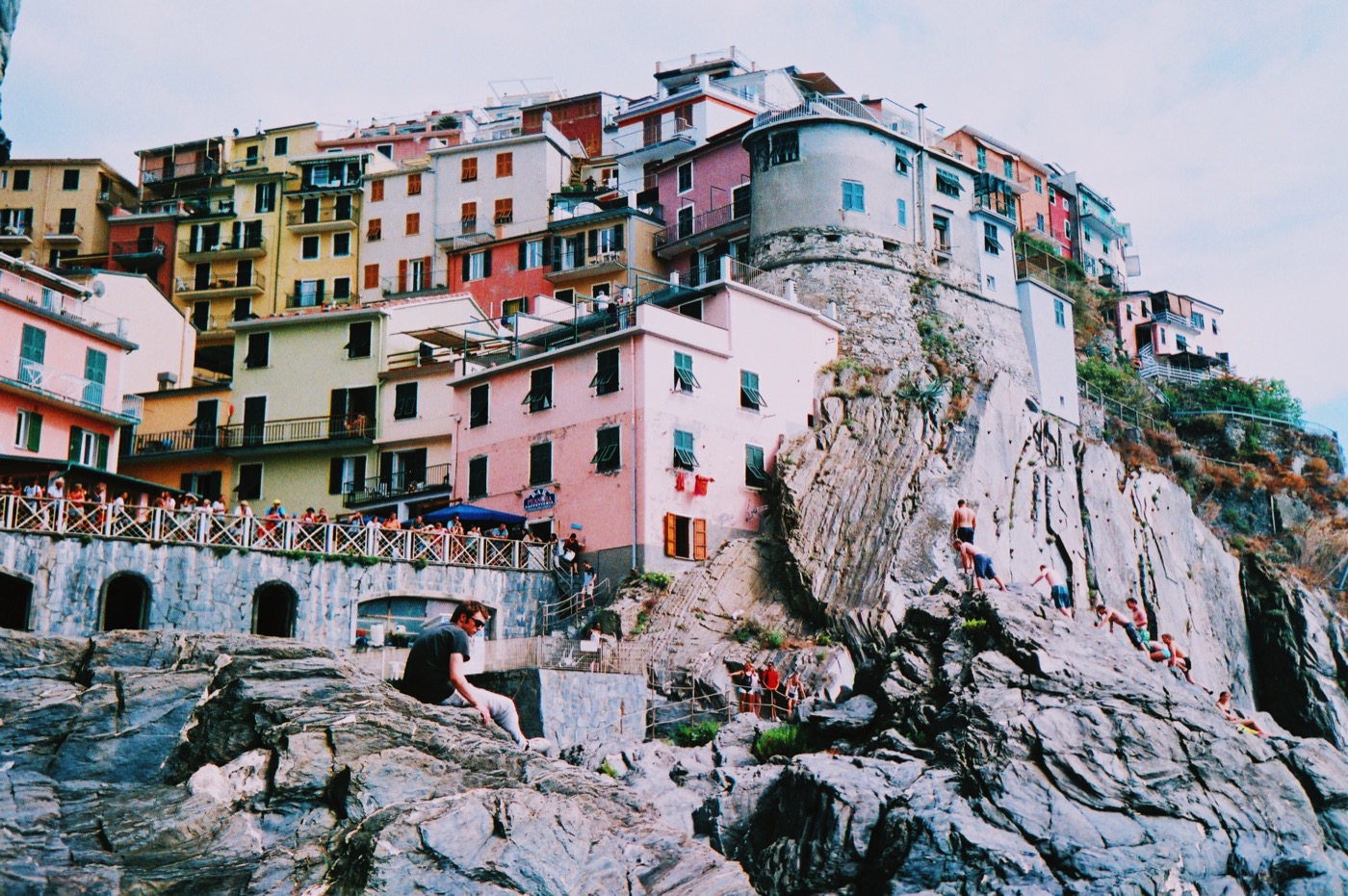 The water was fairly deep, and colder than you’d expect.

Well, colder than we expected anyway – the Italians laughing at the faces we pulled after jumping in. 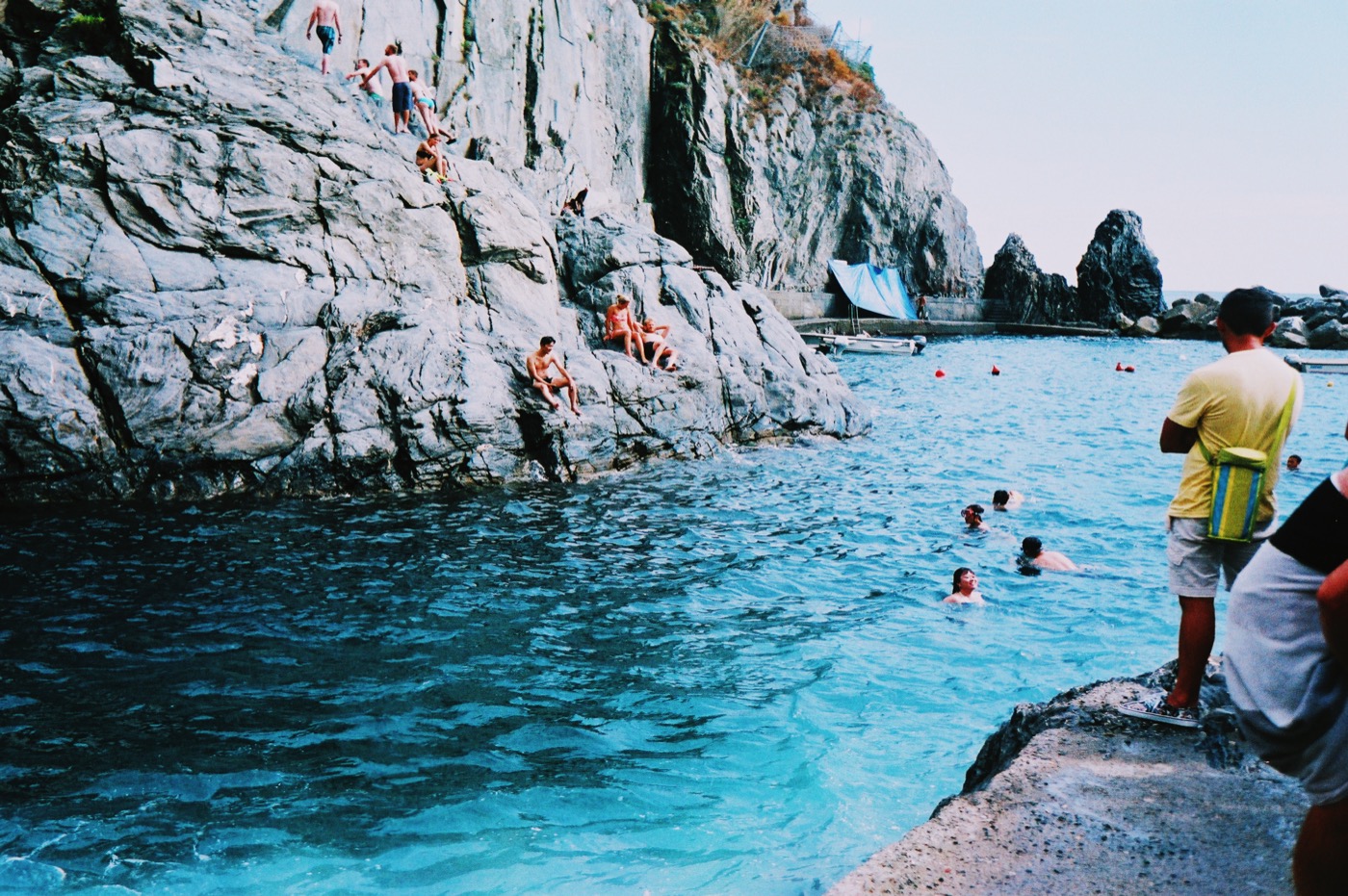 We didn’t jump in from too high though… unlike these mentalists. 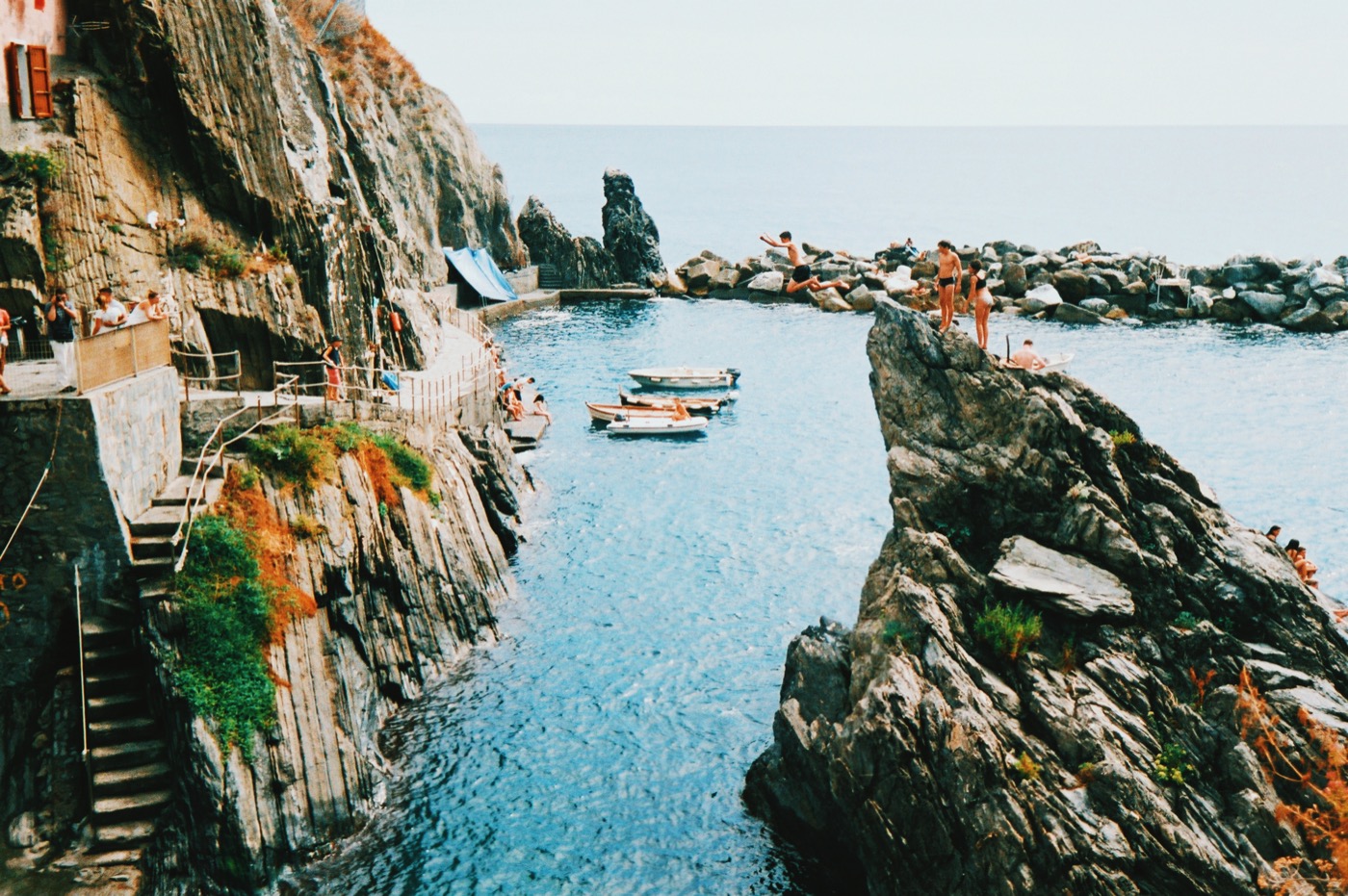 We weren’t down there long before we discovered that there was a jellyfish floating around. The Italians came to the rescue with some nets – scooping it out, and we just dismissed it as a one off event. Ten minutes later, another one appeared, and we decided to get the f*** out of Dodge. Grace scrambled up the rocks like some sort of spider to escape, leaving me behind for dead. Thanks sweetheart.

We met a girl later on who had gone swimming not long after us and been stung – it looked as if a wire had been wrapped around her arm and electrified. As a result, I think we made the right choice in heading to Riomaggiore at this point.

The plan was to do one of the hikes over to Riomaggiore. We felt a built guilty that we hadn’t yet, and this one was meant to be one of the easiest – taking about 30 minutes. Plus, it would help us feel better about eating even more mango gelato. Mmm.

Look at them – ready to hike. 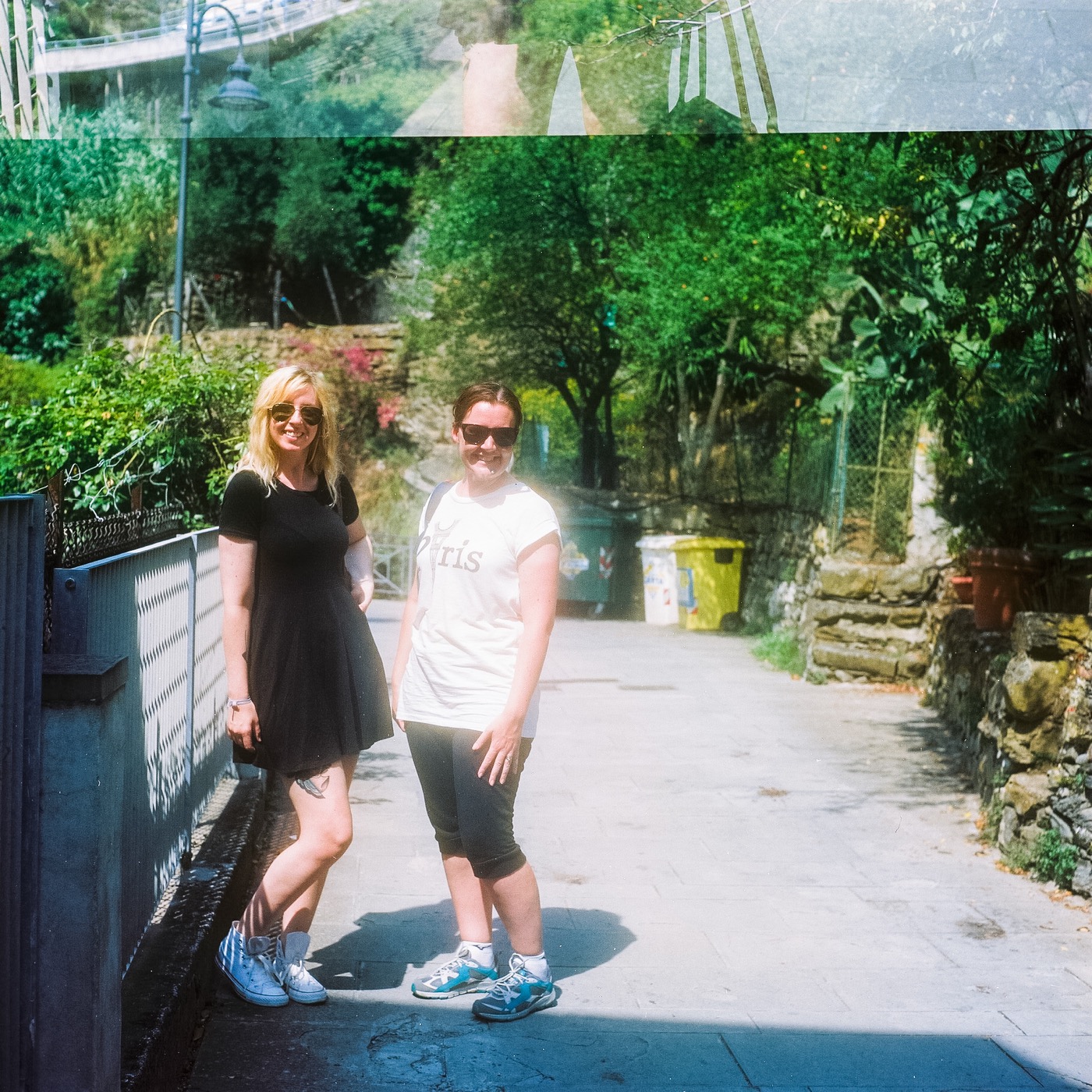 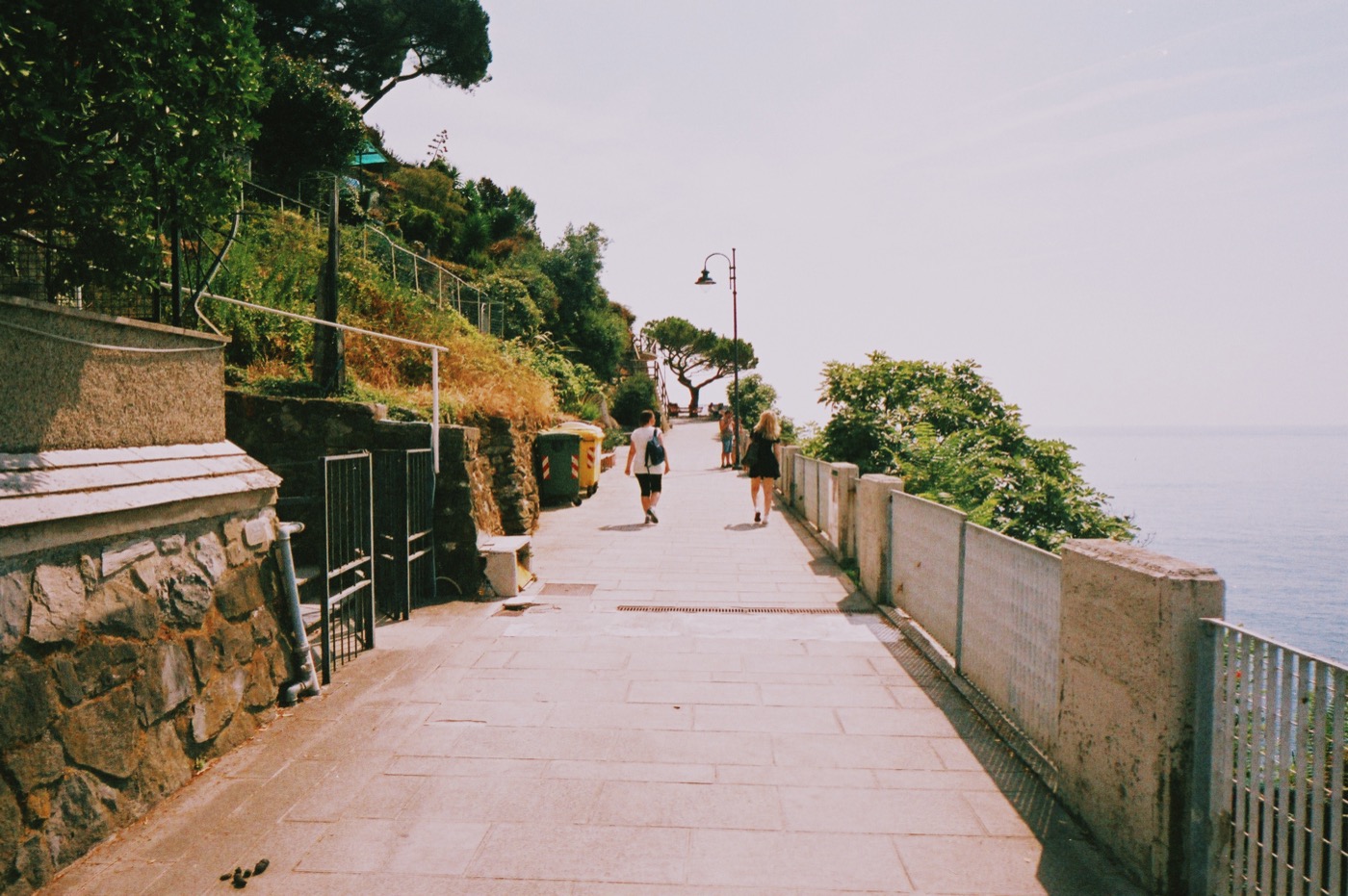 As it is, that didn’t quite work out. The path we were going to take was closed, as part of the trail had collapsed in a landslide a while ago – so we decided to just get the train, rather than do the allegedly far more challenging hike. 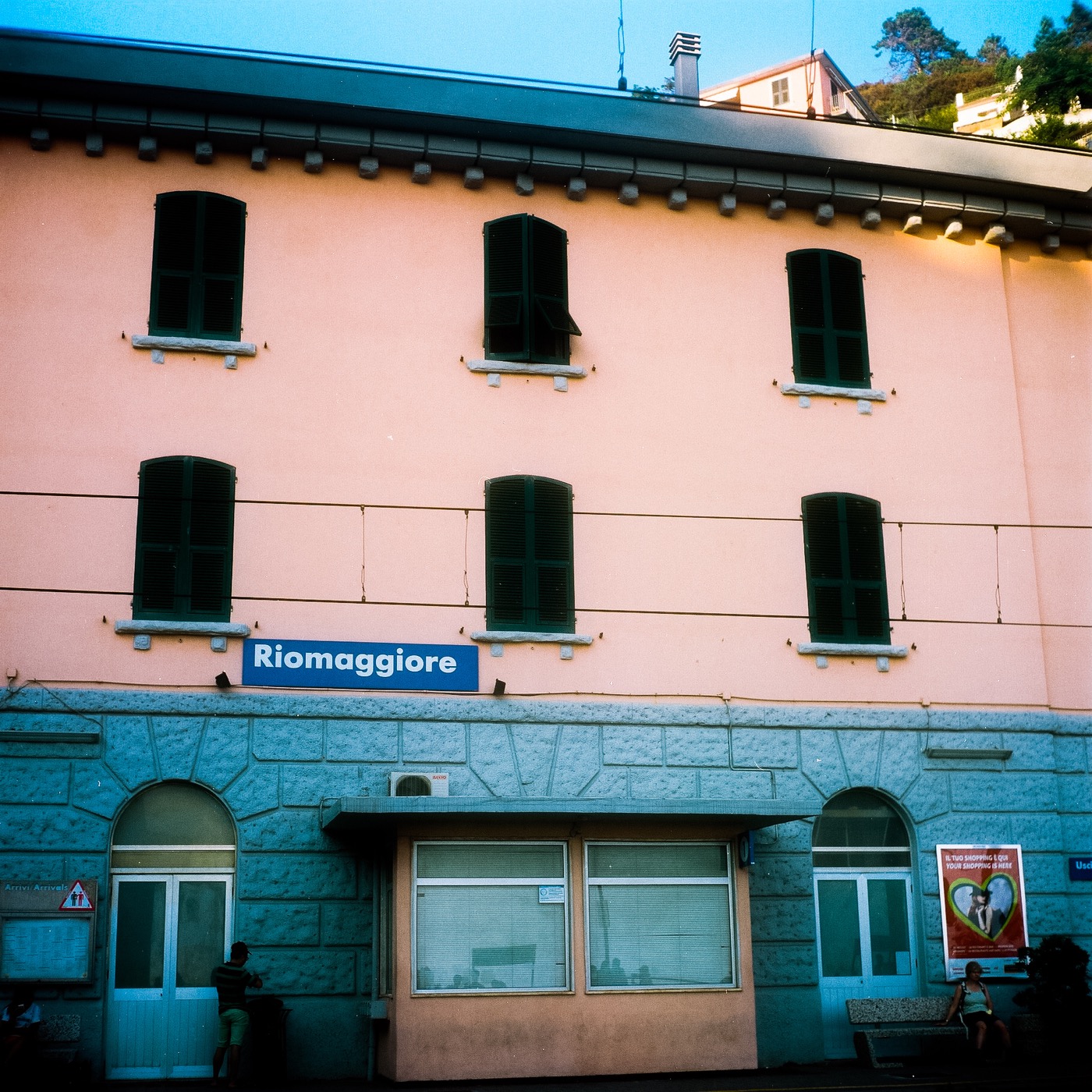 When we arrived, we weren’t too sure of where to go, and ended up straying onto a much steeper, longer path from the station into the village though – which had some great views. A happy accident. 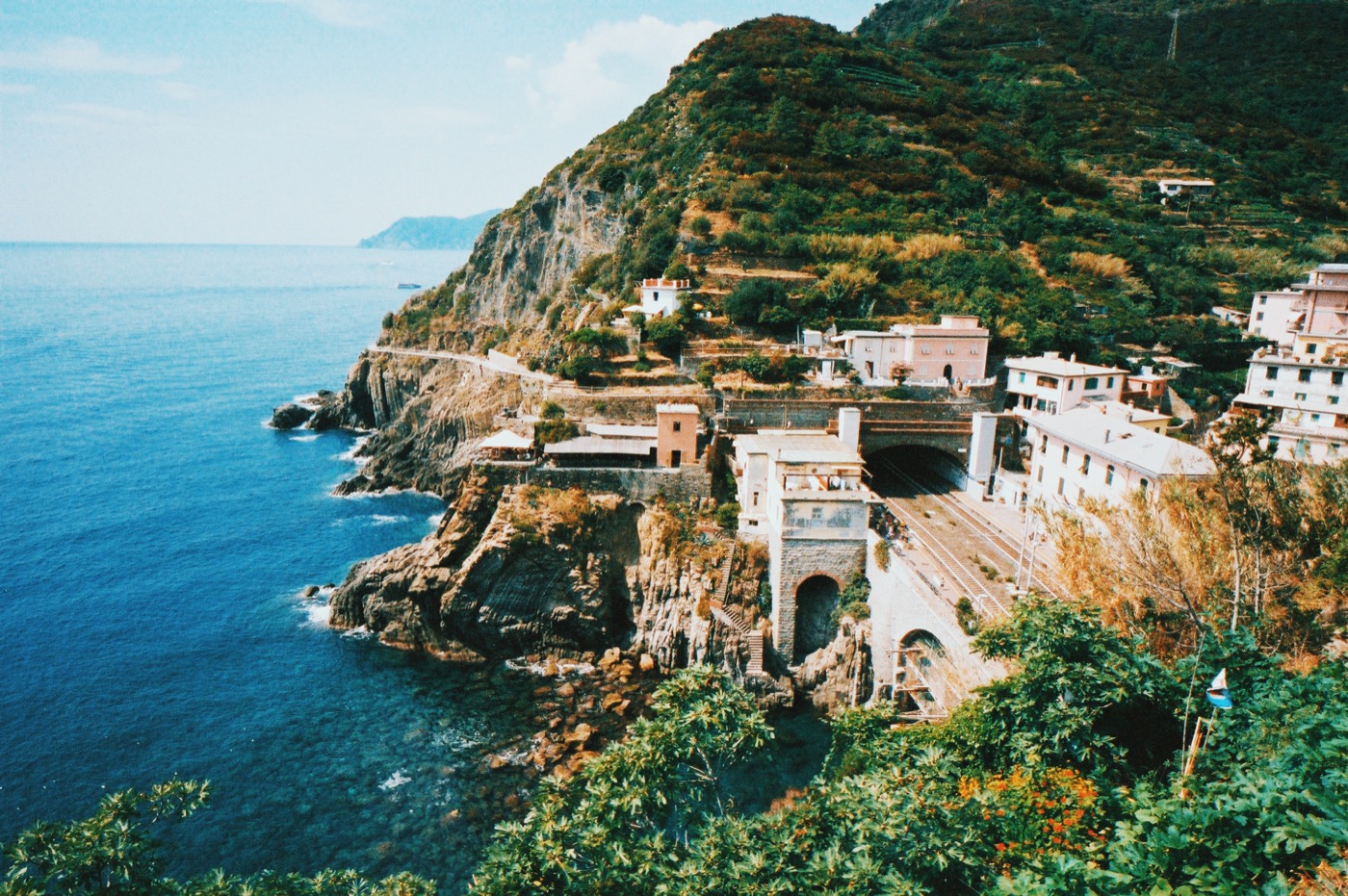 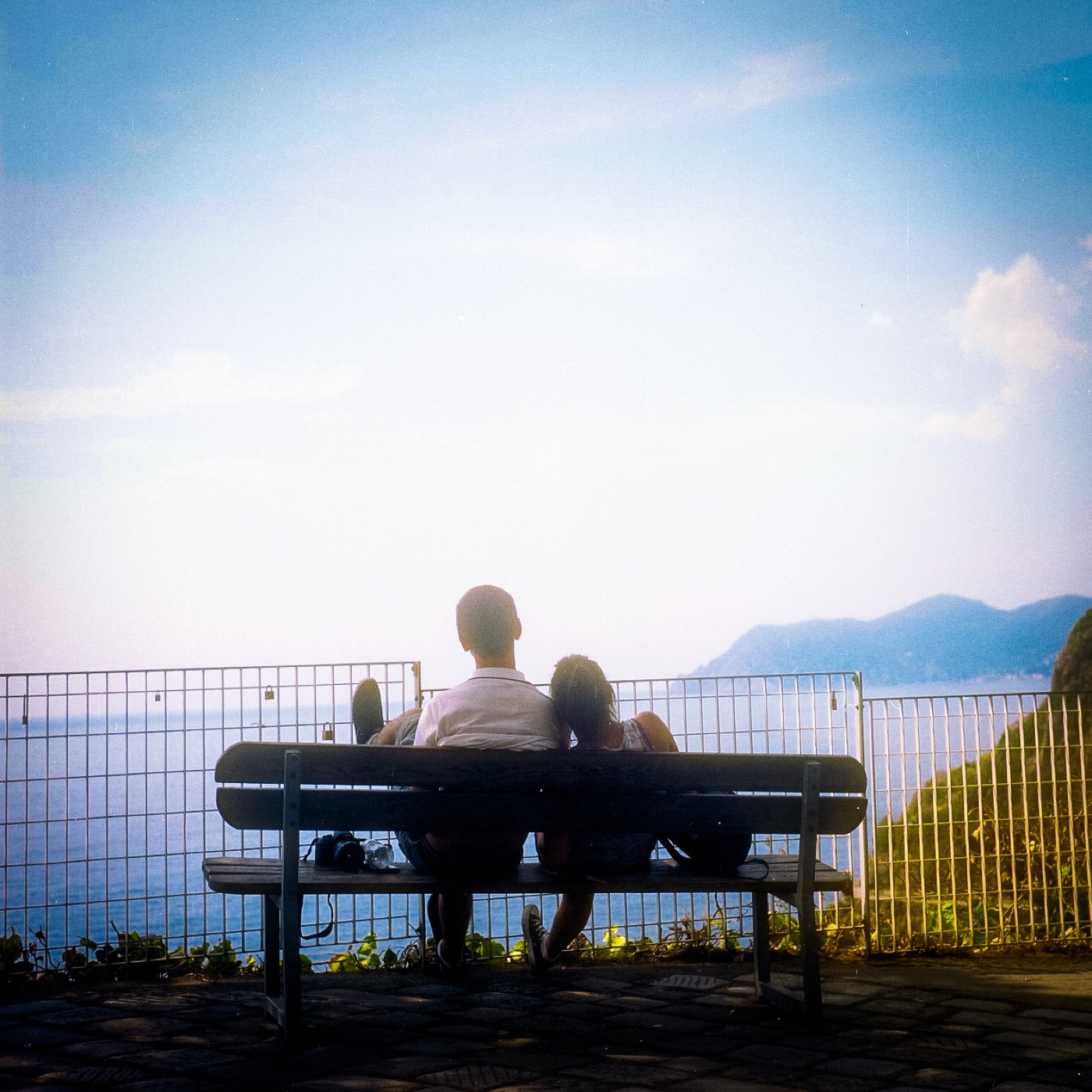 What wasn’t so much of a happy accident was that I didn’t load the film properly in the Leica M6, so a lot of the pictures from the day went into thin air – literally. I wasn’t too impressed with my stupidity. One of the dangers of shooting film.

Living on the edge. 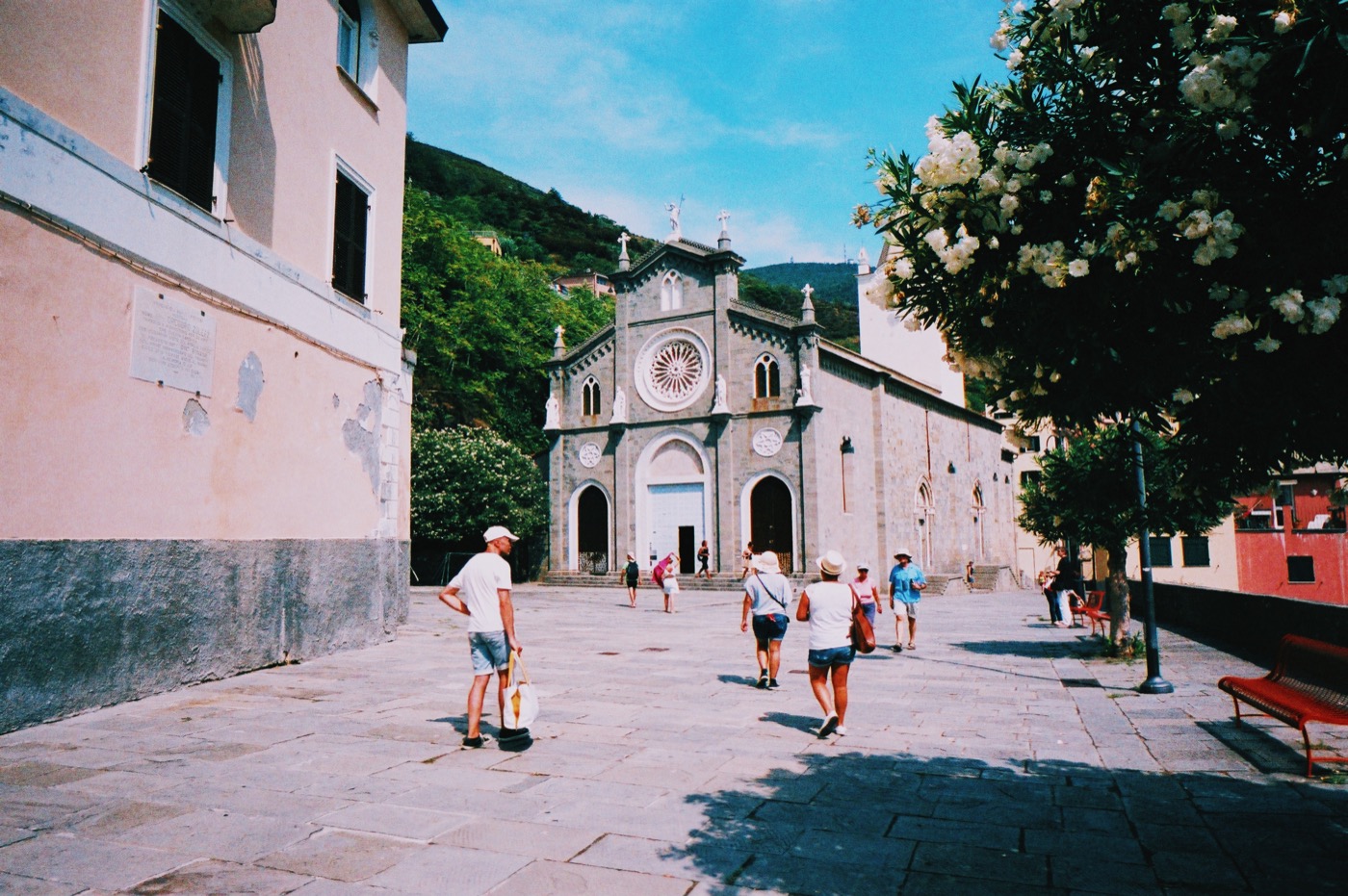 The village itself seemed a fair bit bigger than Manarola or Vernazza from this vantage point, but honestly – I had, and have no idea what size each one was in comparison to the other. I was making wild guesses at the time, and was apparently wrong – so I wouldn’t trust my judgement on this one. The perspective of size was skewed by the differing layout of each place, and by the size of the ‘central’ bit versus the more sprawled out residential area.

Still looked nice, whatever size it is. 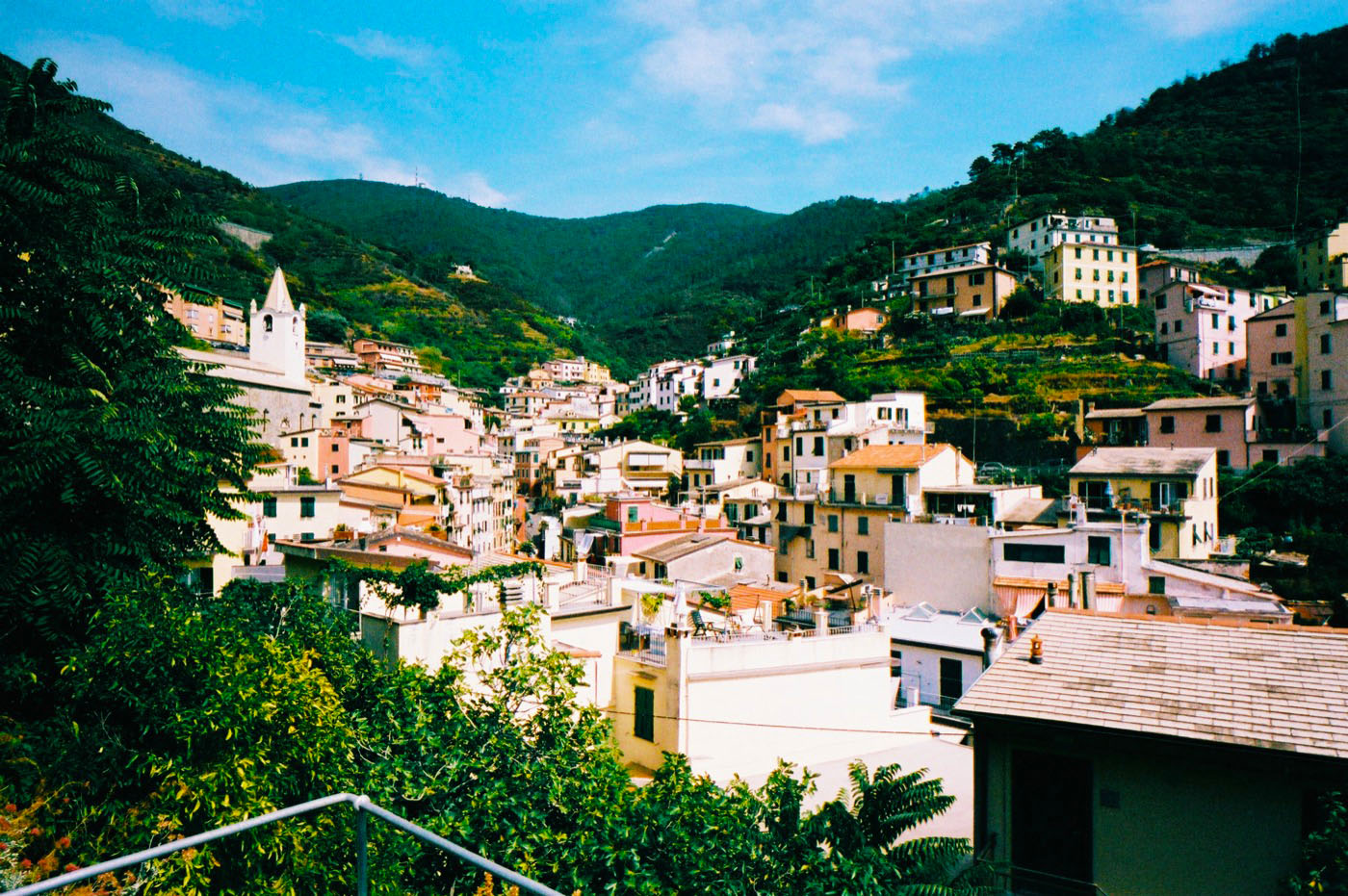 The town was as colourful and beautiful as you might expect. 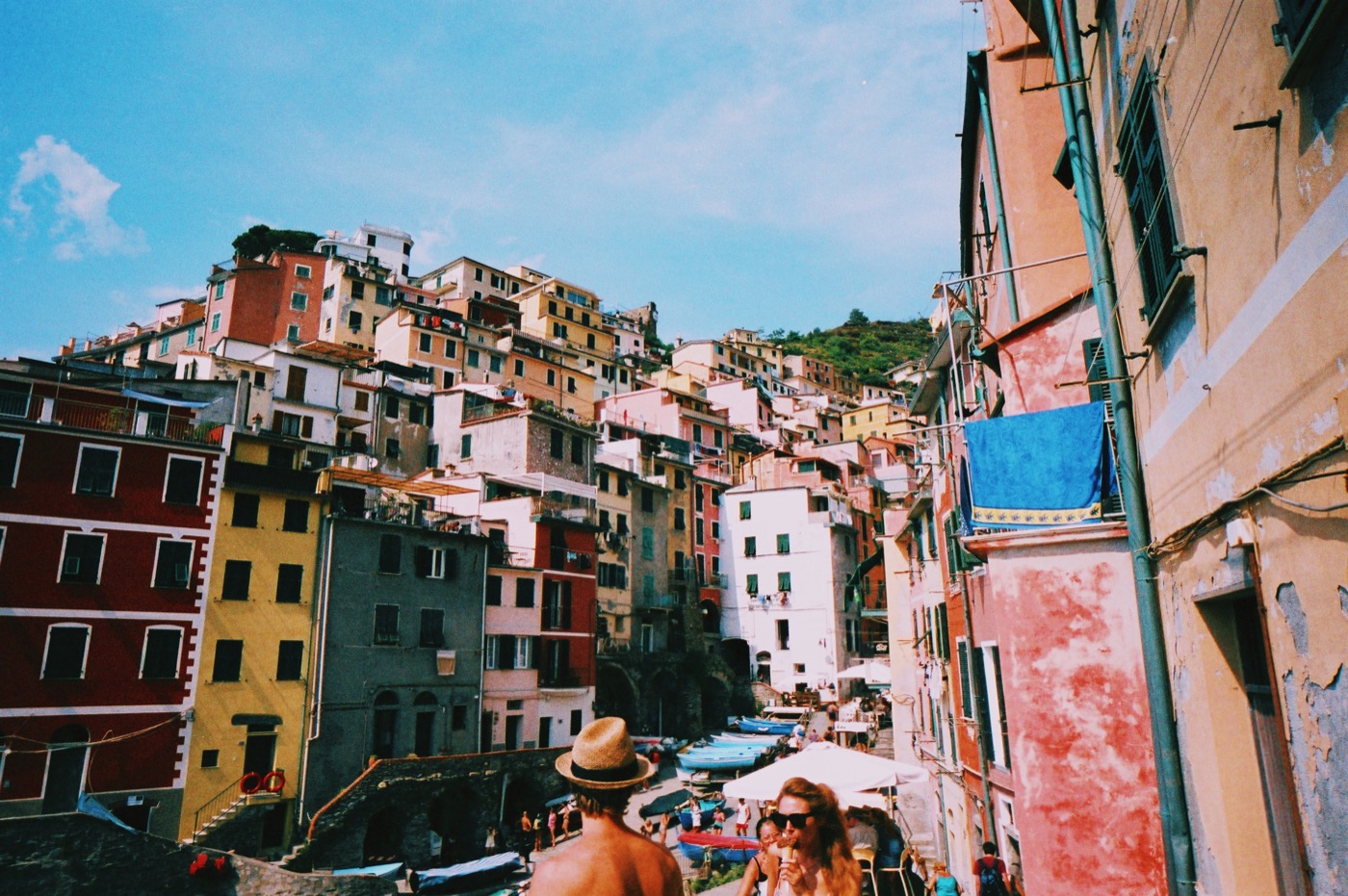 There was a fair amount of beach-goers here, with the usual nutters jumping off of high rocks. 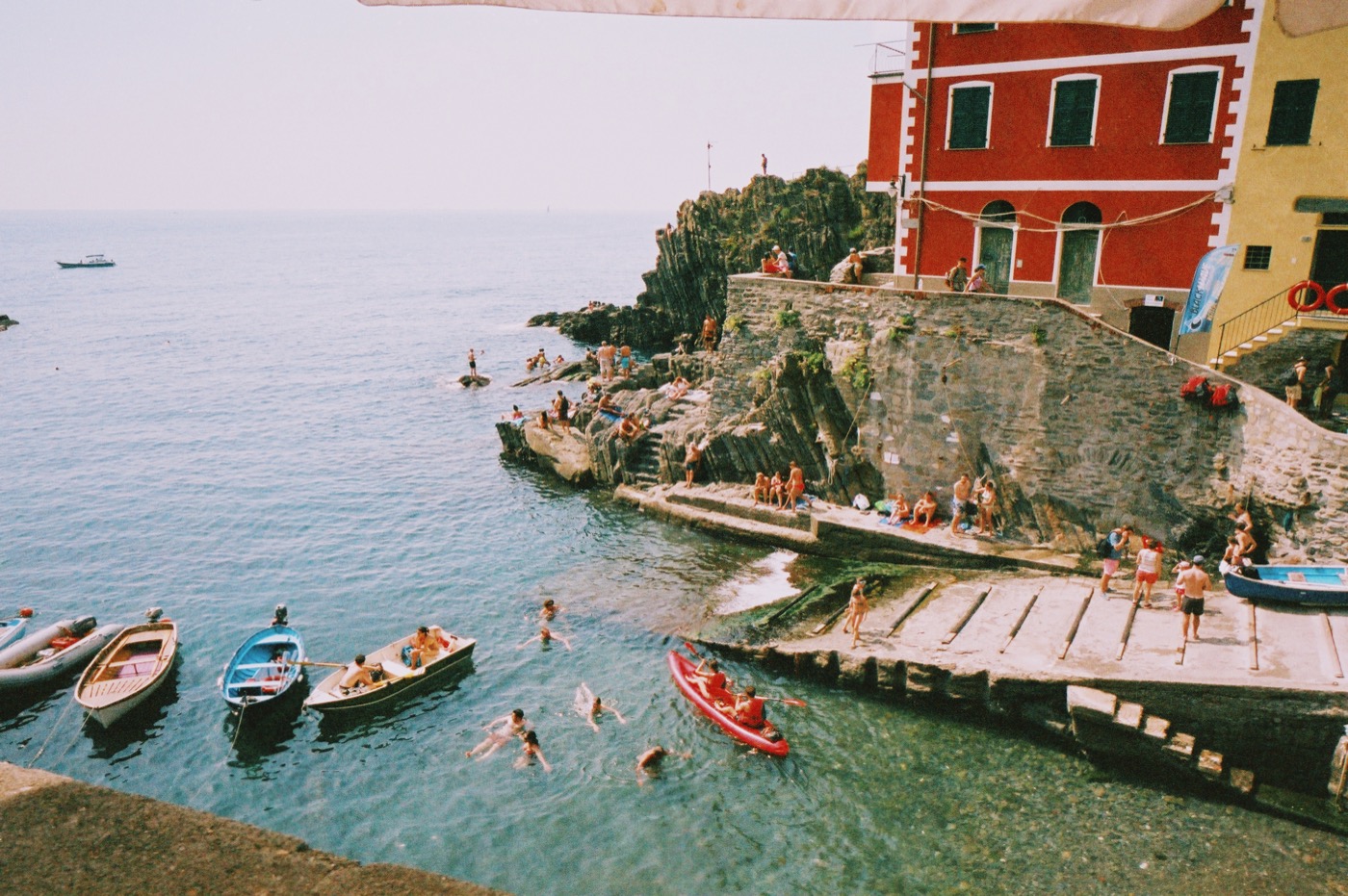 As we were sitting eating gelato (!), we saw a woman completely deck it onto her arse walking down the ramp to get into the water. At first it was a bit painful to watch, as it looked really sore. However, after a while our attitudes changed. The reason people were falling is because they were choosing to walk straight into the water down the clearly very slimey and dangerous green/black moss/scum/whatever you call it that was growing at the water’s edge. It became strangely enthralling (and completely satisfying) to watch ignorant tourists march right down the pier to take a picture – fully clothed, and end up flat on their back in the water. 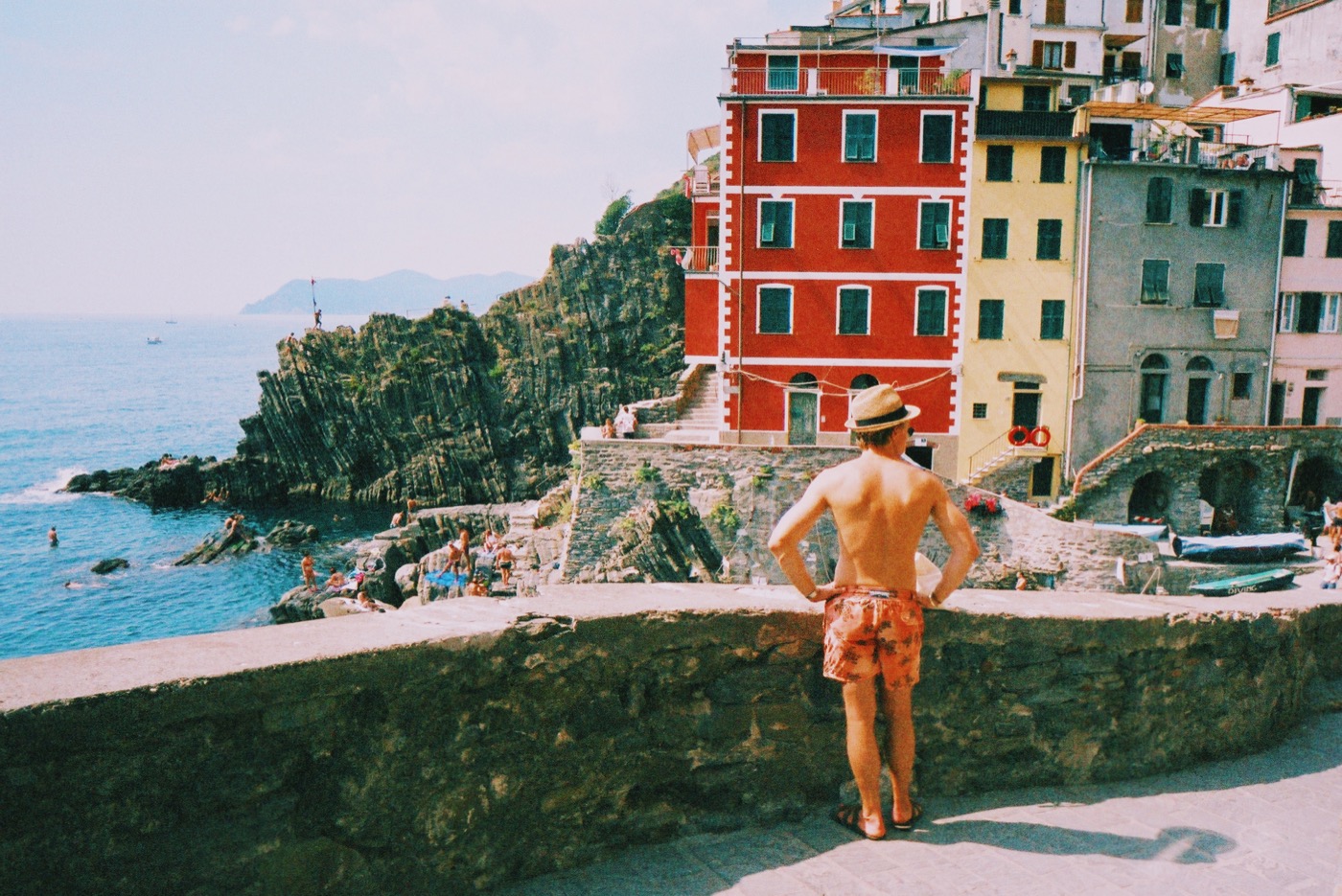 As with most of the towns, there wasn’t much to do except sit by the harbour in the sun – which we did. In an attempt to save some dosh, we got some ‘fish and chips’ – but not just any old fish and chips.This place had huge pans full of all kinds of delicious (fresh) fried seafood – from mussels, to anchovies, to crab. You picked a size of paper cone, and then pointed at different things until it was full. Coupled with some wee bottles of wine, and yer sorted. I bet it would do well as a hipster food stand in the West End.

And with that, our Cinque Terre time was drawing to a close. Next up, was La Spezia…