The last update I posted from our Italian trip saw us in Pisa. After that point I pretty much stuck to shooting film, although I did manage to grab a few 35mm pictures there before we left. 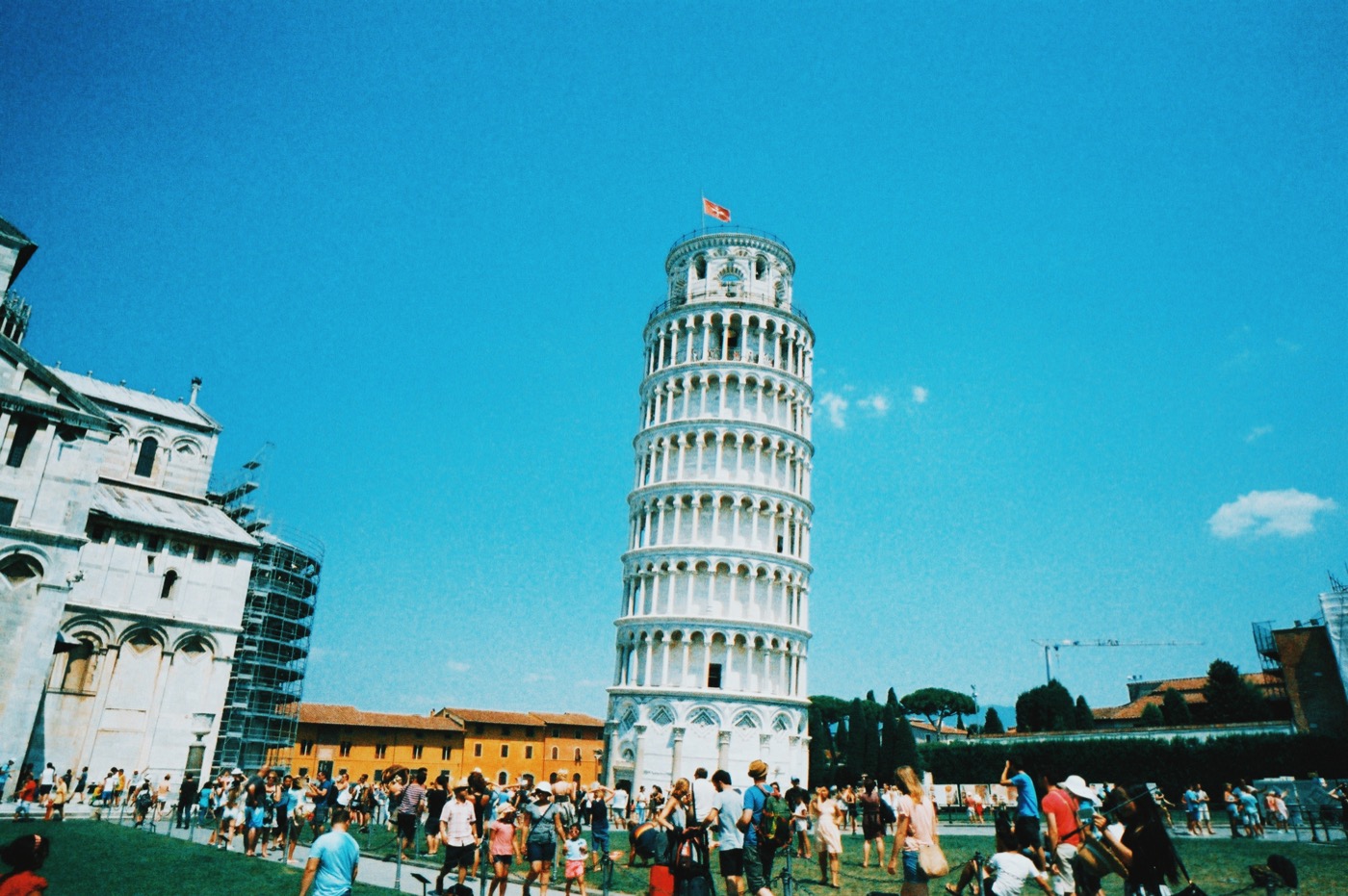 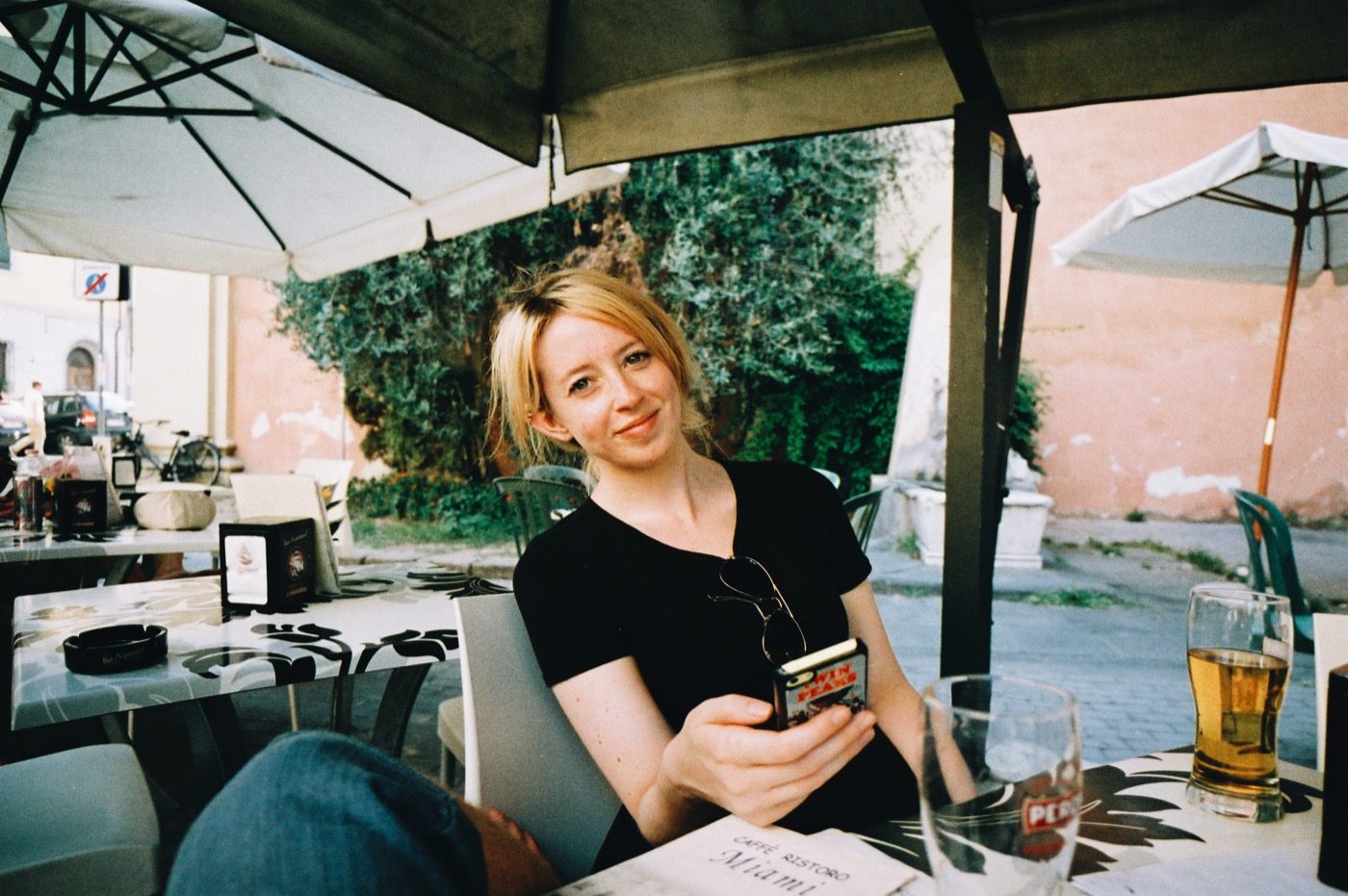 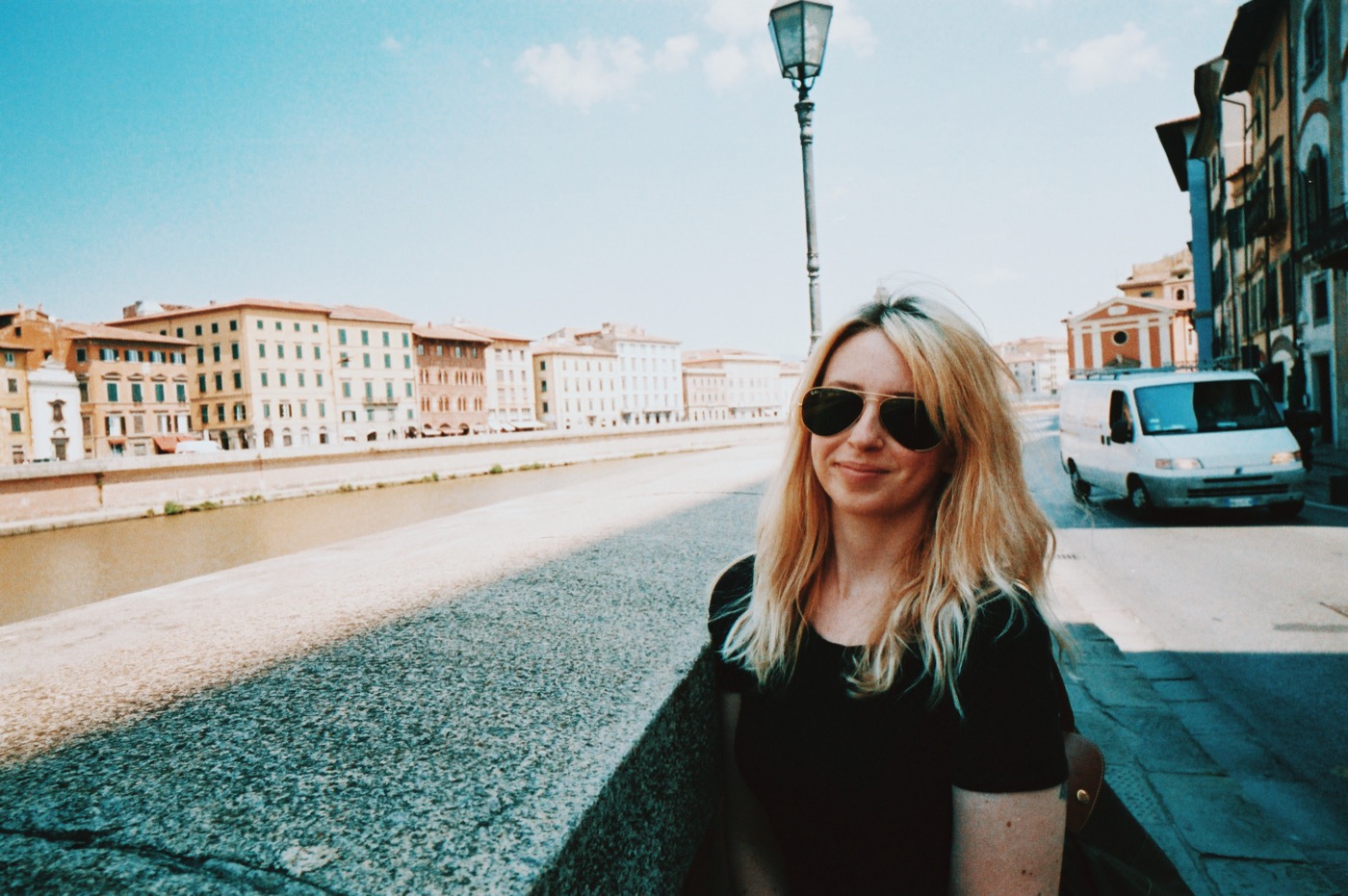 Sticking to film from here on out was for good reason, in that we were heading onward to the Cinque Terre: five tiny coastal villages joined mainly by rail, that are often seen in Buzzfeed style bucket lists of places to visit before you die. The buildings are famous for their colours, and I wasn’t going to entrust that to digital.

With five charming villages to choose from, it was tough to pick somewhere to base ourselves. We had about five nights, but didn’t want to keep switching locations every day, as that would mean carting our bags about. Instead, we opted to stay in Vernazza (the second furthest one away from the main station in La Spezia), and then move on to Manarola after a couple of days – which was two stops down the line.

Vernazza turned out to be a solid choice. 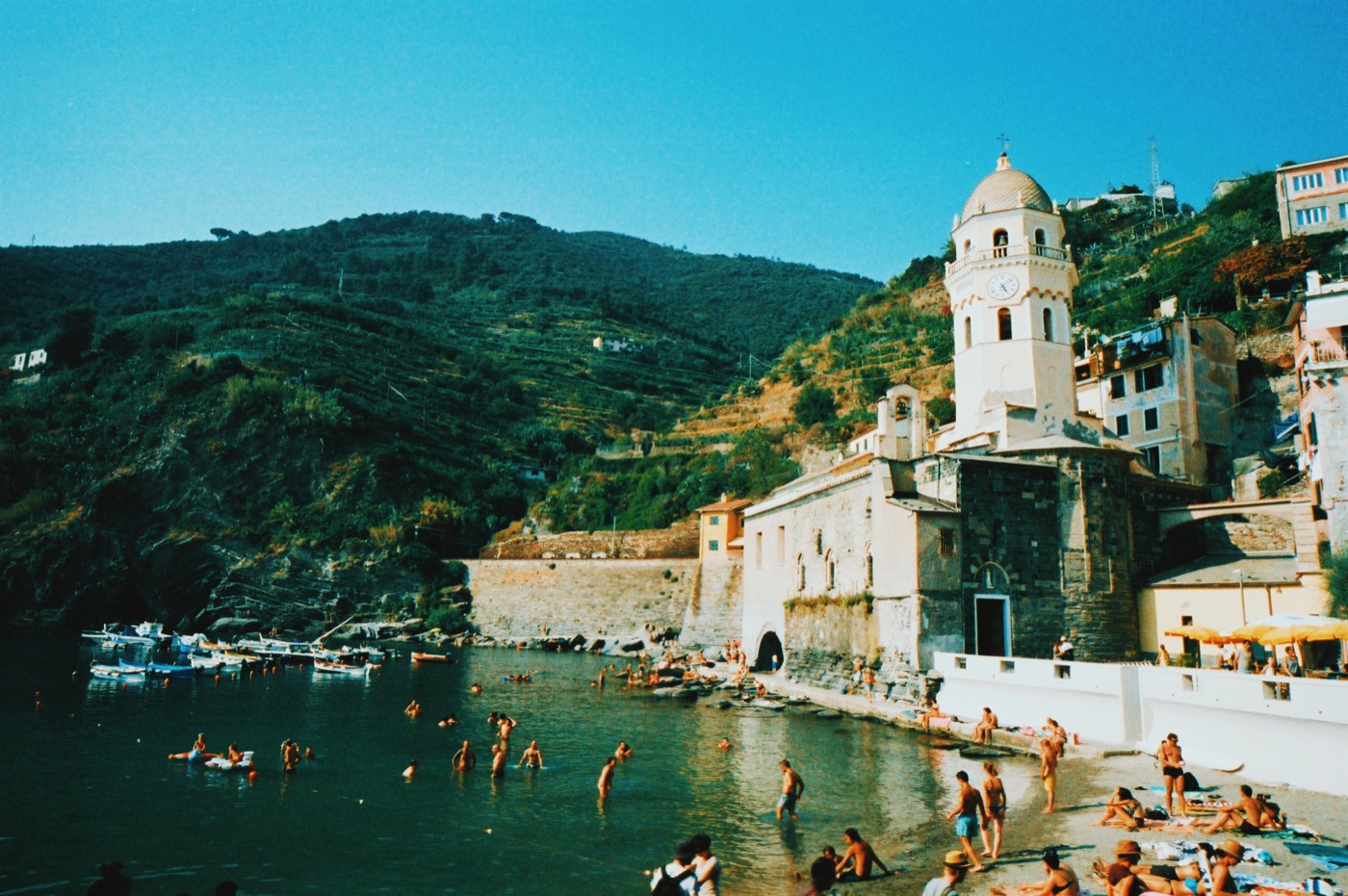 I was especially glad of our backpacks here, as it was a bit of a steep climb to get to the flat that we had rented. The view out of the window was worth it though. 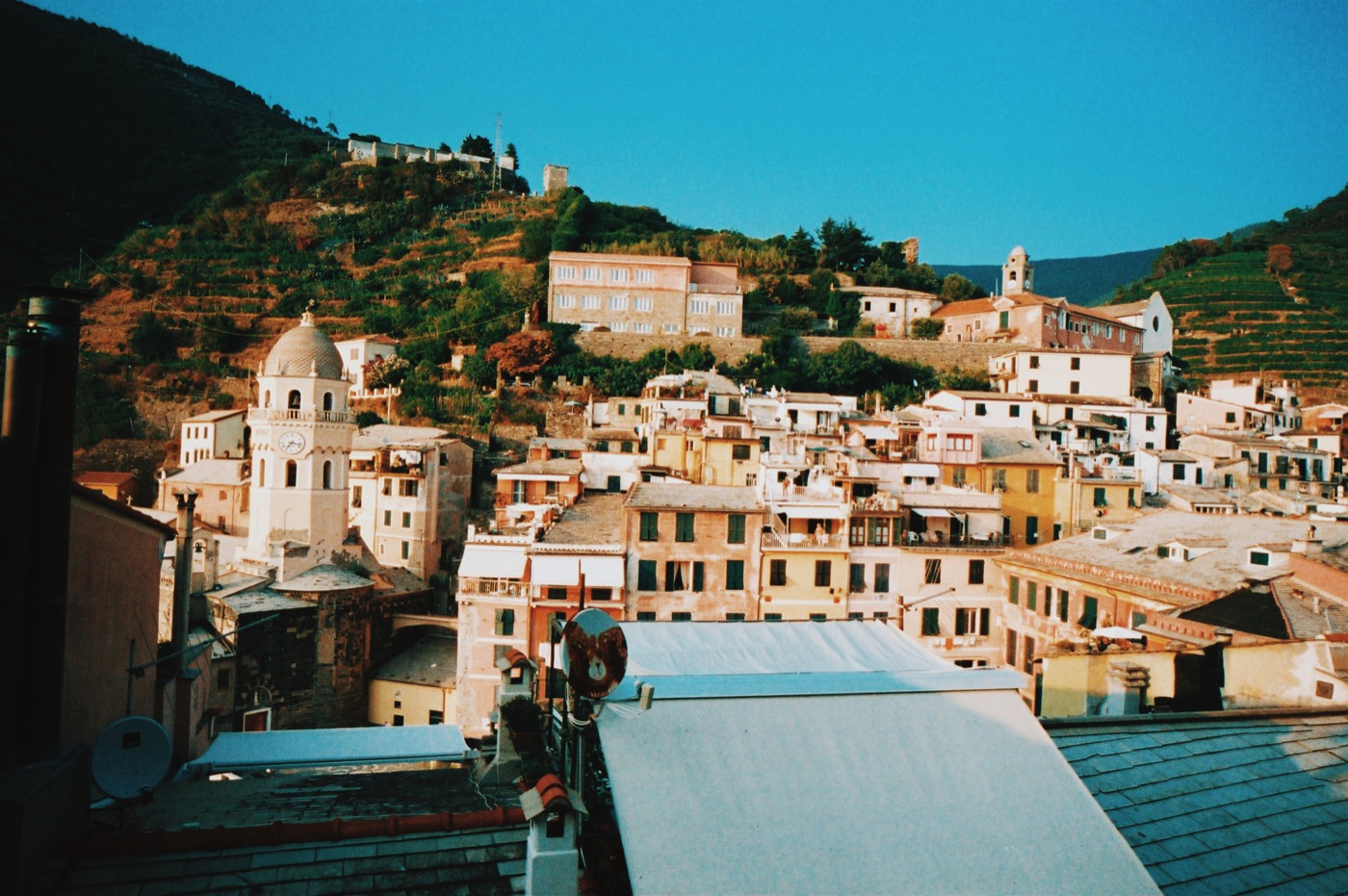 As soon as you step off of the train, there are people wandering about in bikinis and swimming shorts. A brief (and I mean brief) stroll downwards leads you to the harbour, which was every bit as pretty as it looks in the articles you see online too. 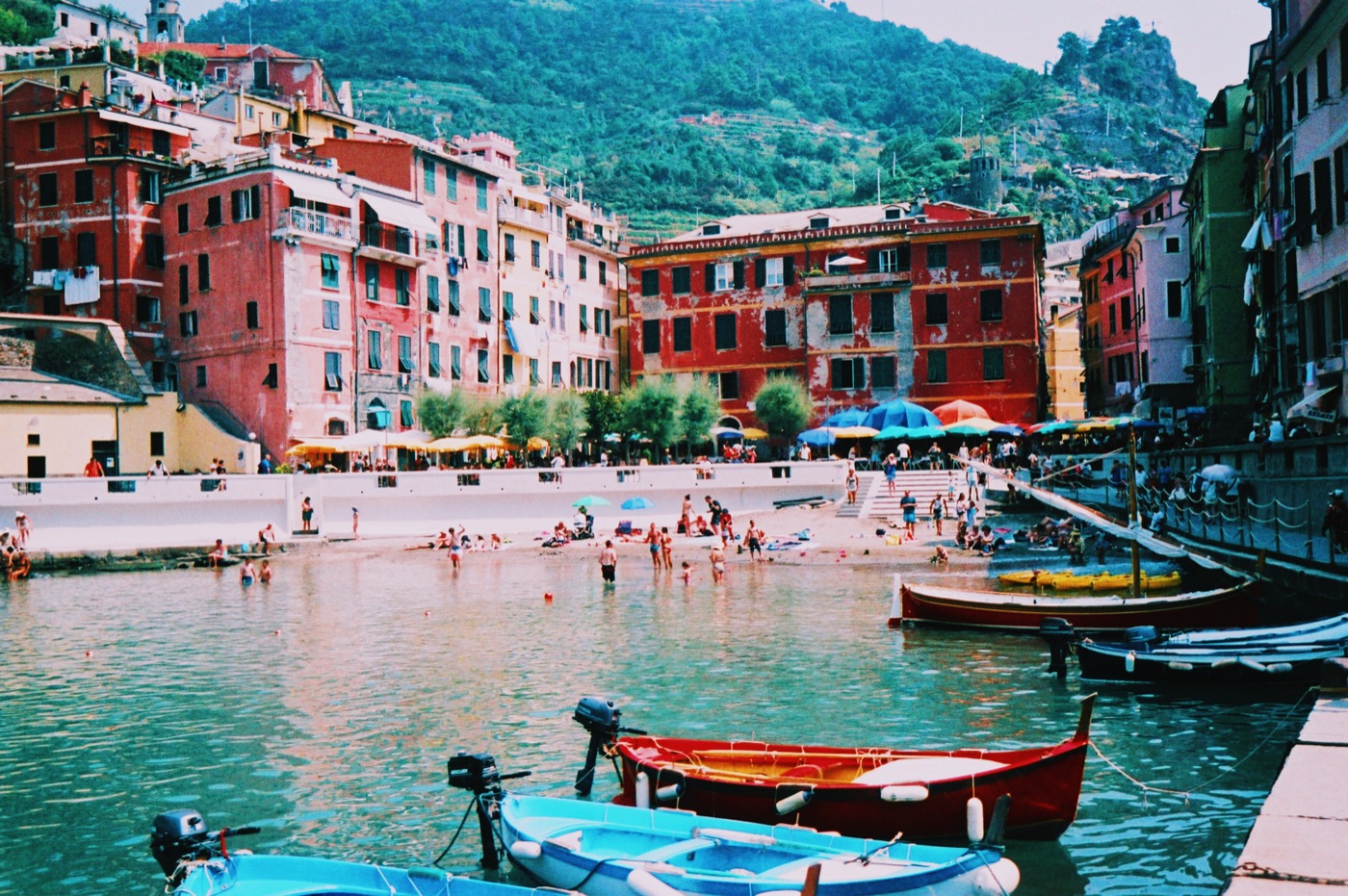 There wasn’t as many selfie-sticks here, which was a nice change, but then it wasn’t exactly a daytripper sort of place. Once you were here, there was literally nothing to see or do except go for a swim, which we did. 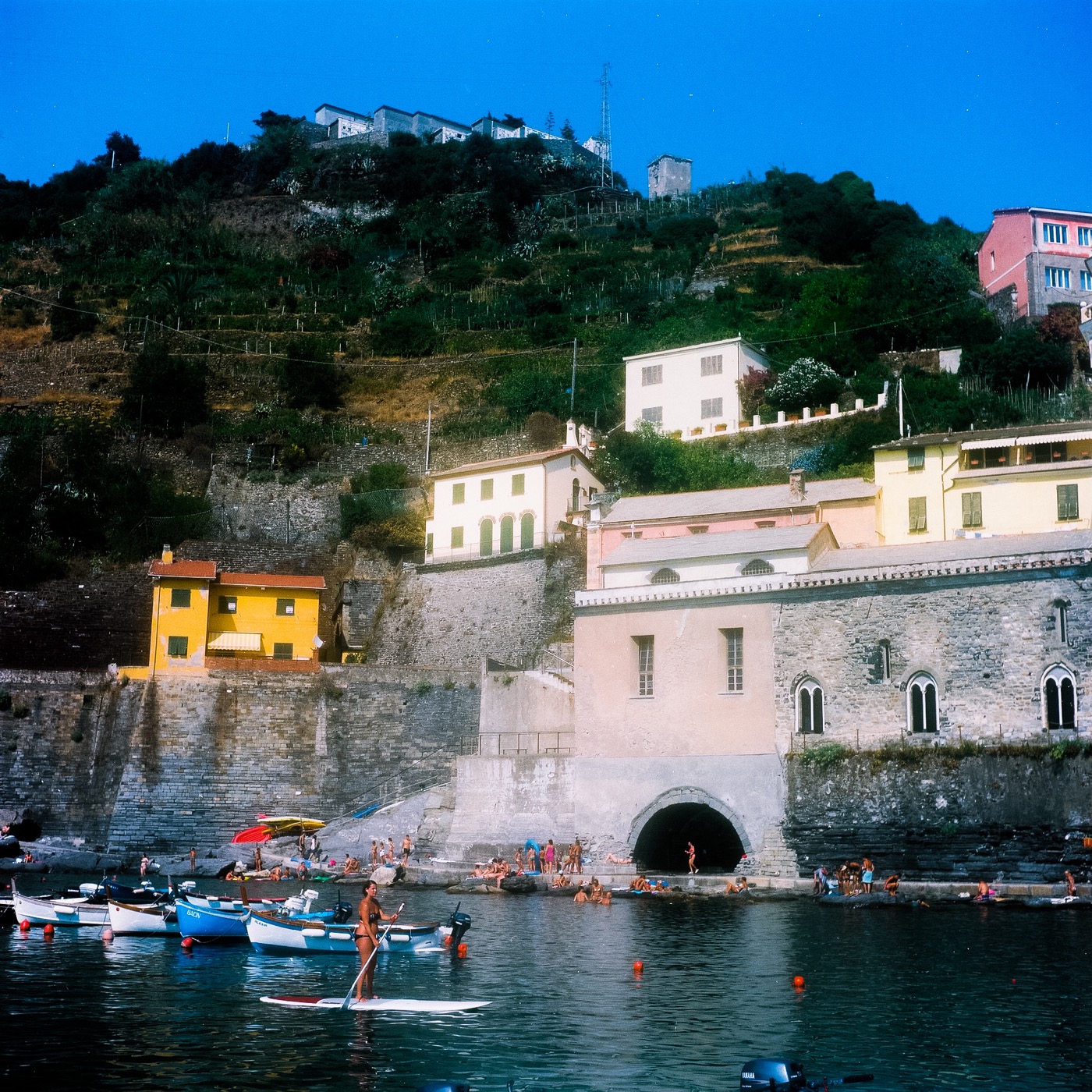 This was really somewhere to go if you wanted to do absolutely nothing for a week. To be totally honest, it felt a bit claustrophobic to me at times, and made me get over any sort of idea that we might regret not having a lazy holiday. It’s not because there was loads of people or anything, but that there was literally nowhere to go and hang out except the harbour. Don’t get me wrong, it was extremely nice to sit there at night with some vino, but I couldn’t have done it for longer than a couple of days or I’d have gone stir crazy. 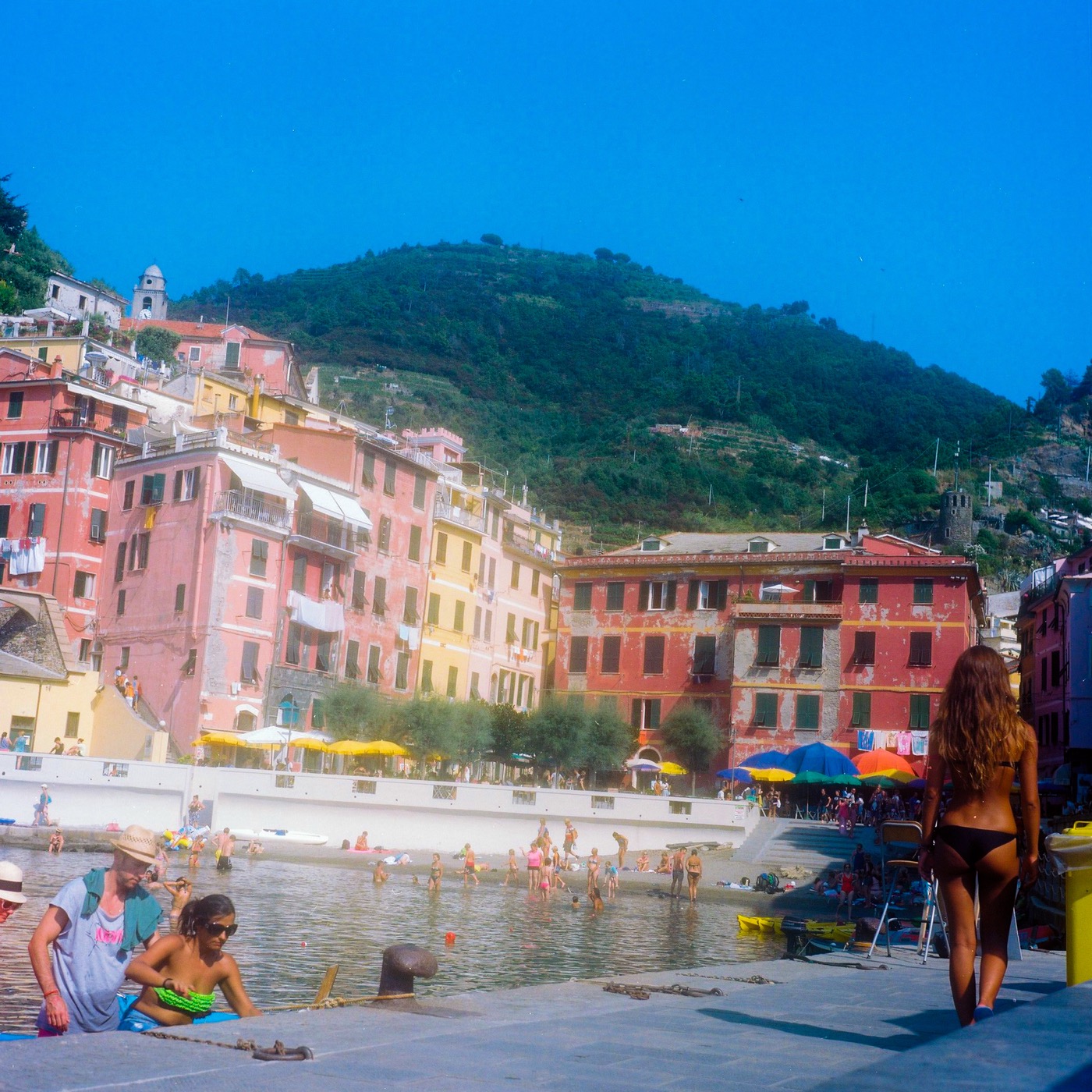 We found an amazing ice cream (or ‘gelato’ if you’re not from Scotland) place that had this incredible mango flavour that literally tasted like they had pureed mangos and somehow ‘made a better mango’ in Grace’s words. We had been searching all over for some fresh fruit, and there wasn’t really any markets nearby, so when we spotted that this gelato place had some in these fridges out the front of the shop, we took a watermelon up to the counter to try and buy.

Apparently it wasn’t for sale. “I need that for my gelato.”

Ah well, it just meant we had to get some more of that mango stuff. It wasn’t till we left Vernazza that we realised that there were various markets with fruit available, but they hadn’t been open over the weekend when we were there. 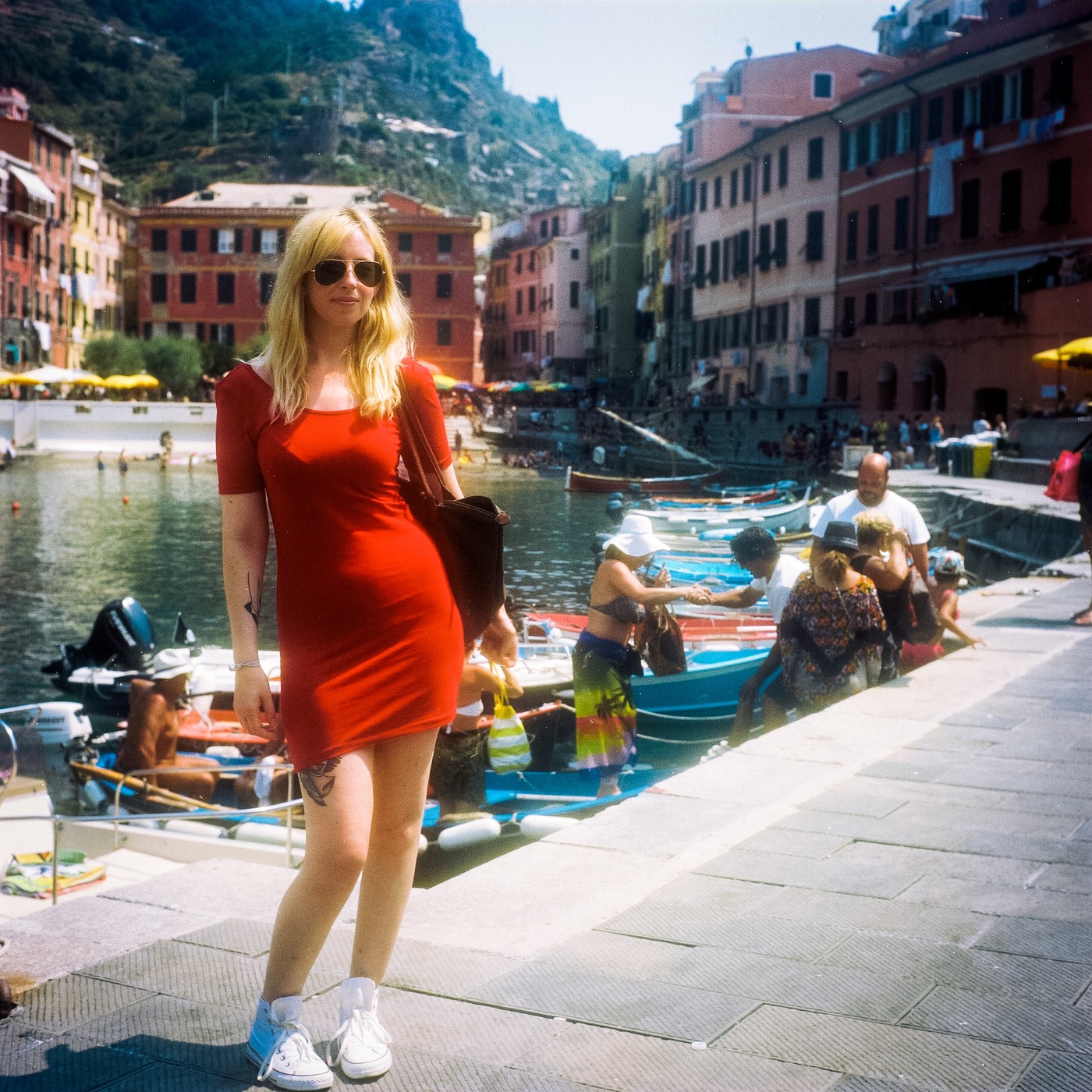 Vernazza turned out to be a great base, and a good starting point for visiting the Cinque Terre. Sitting by the harbour at night was nice, even when it rained, although one night we headed there to see the Italians scurrying away as tiny drops began to fall and smugly laughed: “Hah! They don’t know what real rain is.”, only to get soaked by a huge wave that crashed against the rocks where we were sat. You win this time, ocean.

Monterosso was the next town along the coast from Vernazza, and not one that we had planned to visit. We had heard it was bigger and more resorty, and so thought we’d explore the other, more quaint ones instead.

That was, until, we discovered that Corniglia was located on the hillside, up 33 flights of steps from the train station. 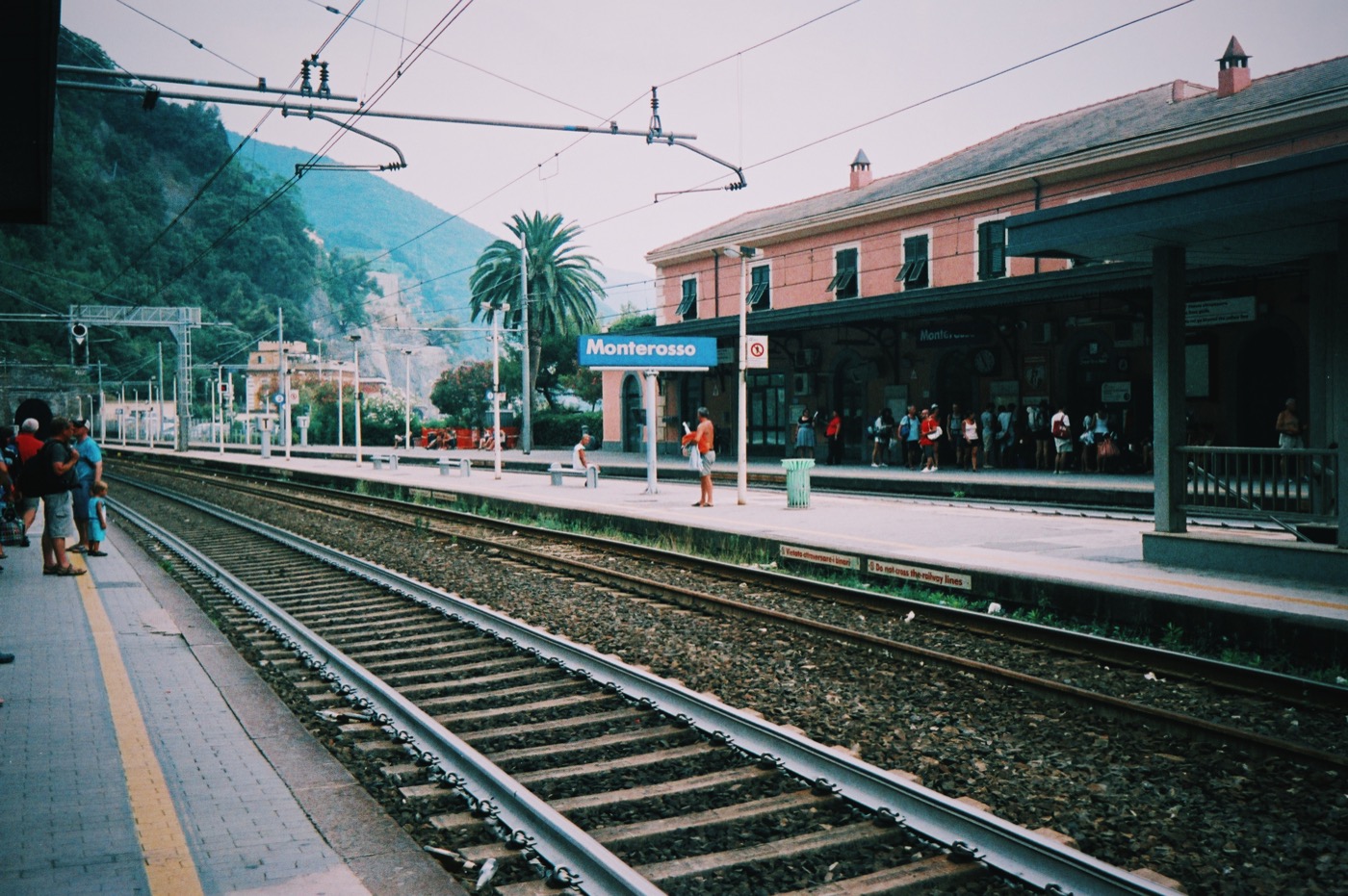 We had to miss one of the villages out to make sure we could probably see the ones we got to, so it was definitely going to be the one that you had to climb 400 odd steps to get to. People had all been recommending that we did some of the hikes between the villages themselves, but I’m sure very few of these people have done them in 40 degree heat (Celcius). We were too hot, and so it was out of the question. Onward to Monterosso! 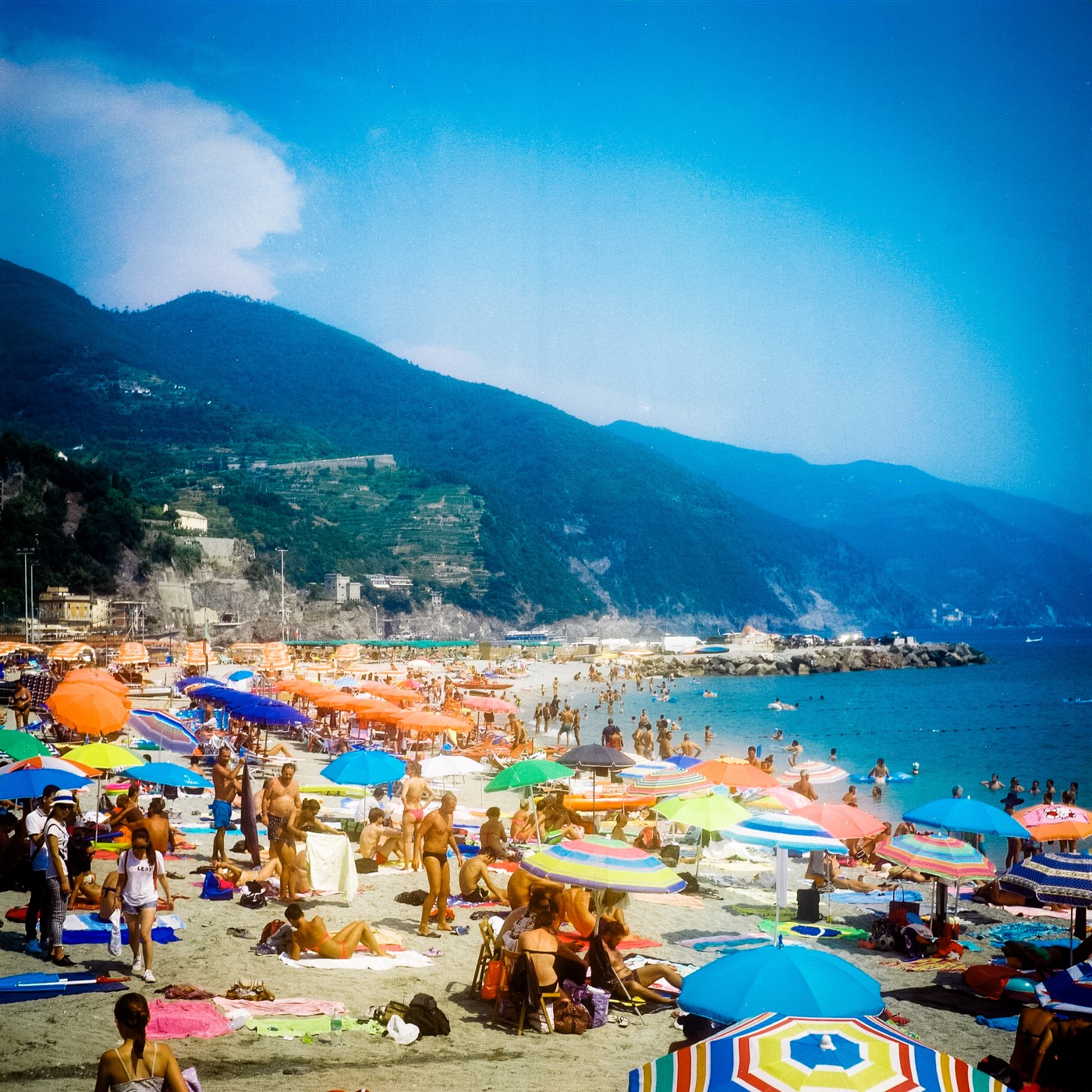 This day turned out to be a bit of a let down, to be honest. The one saving grace was that Grace looked smoking hot in her red dress. 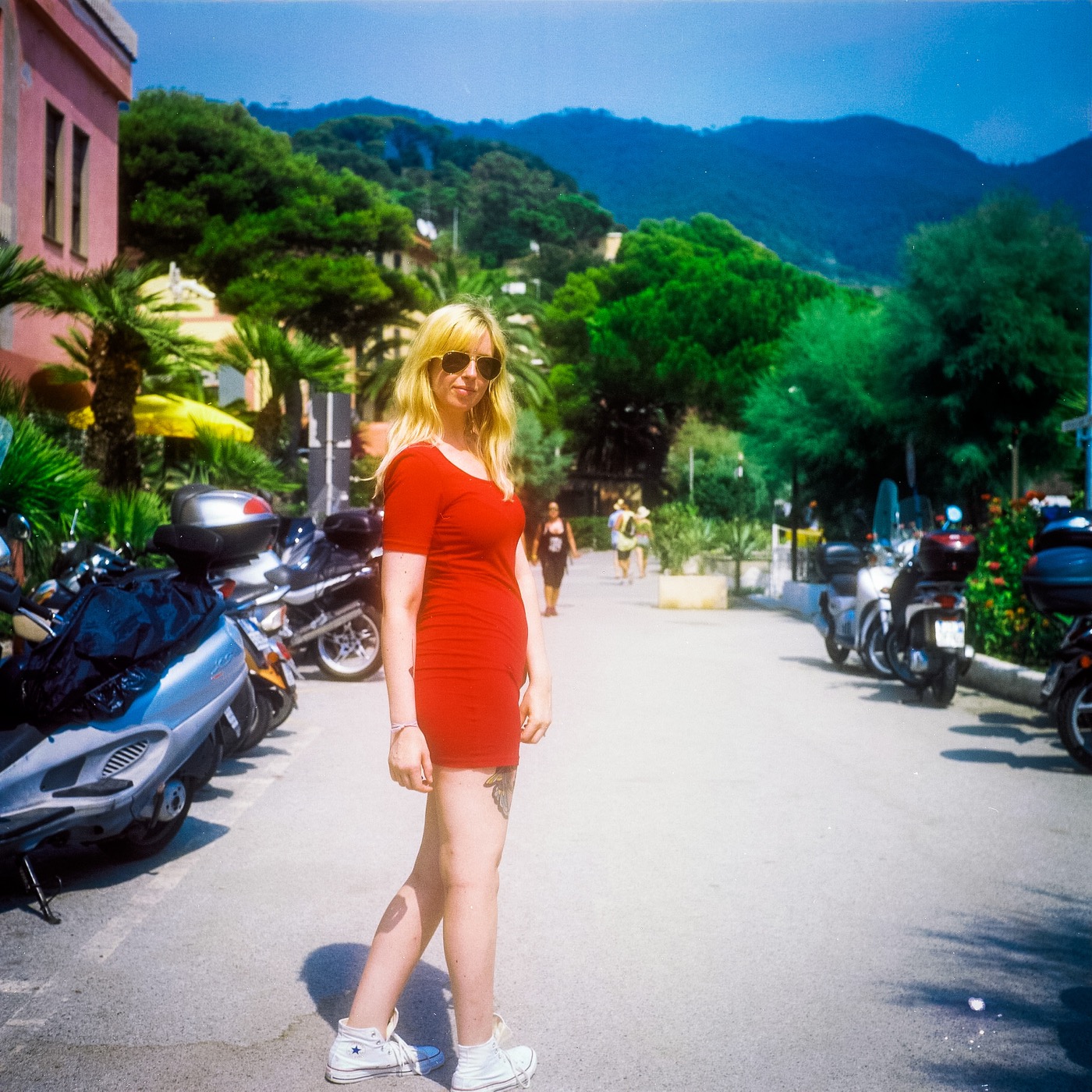 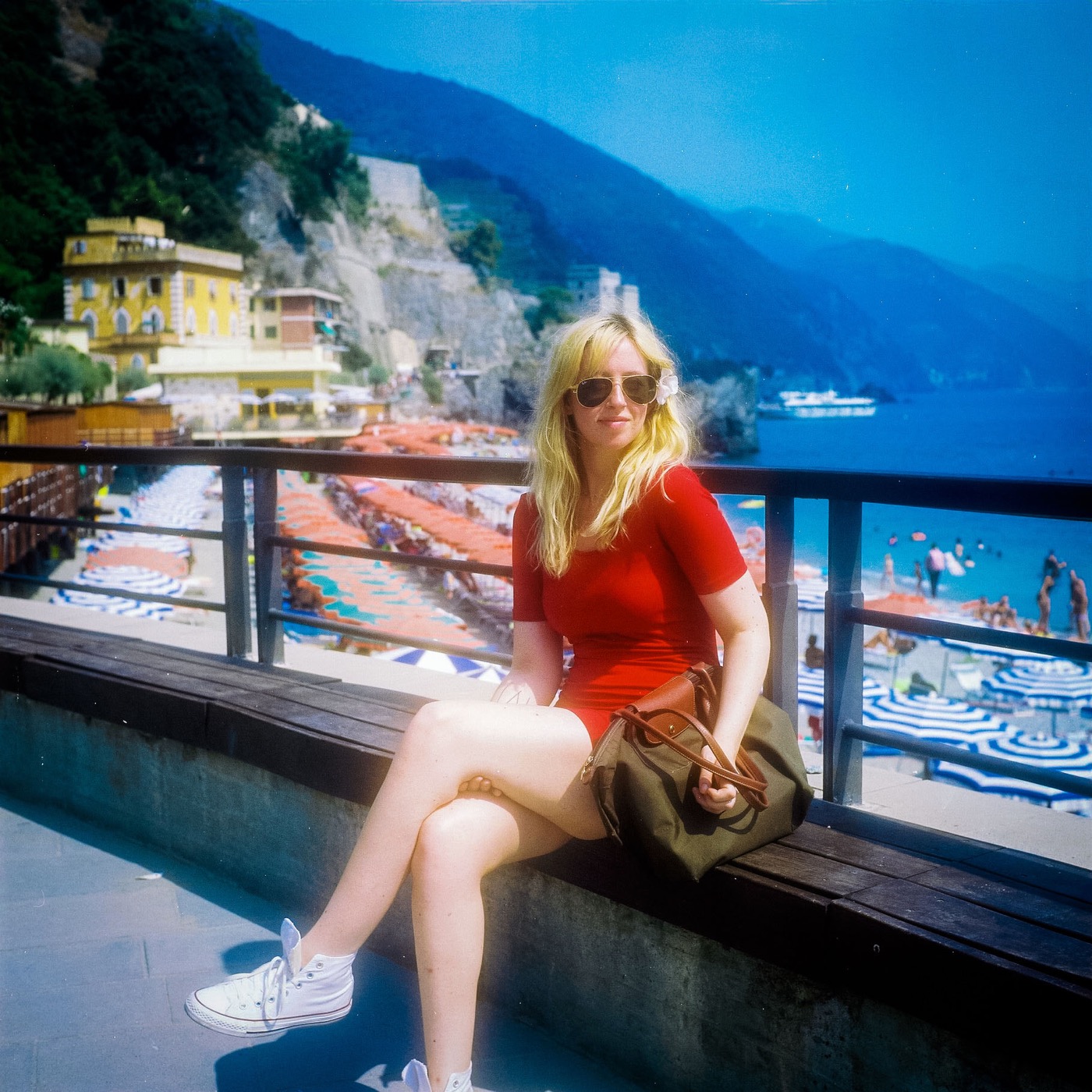 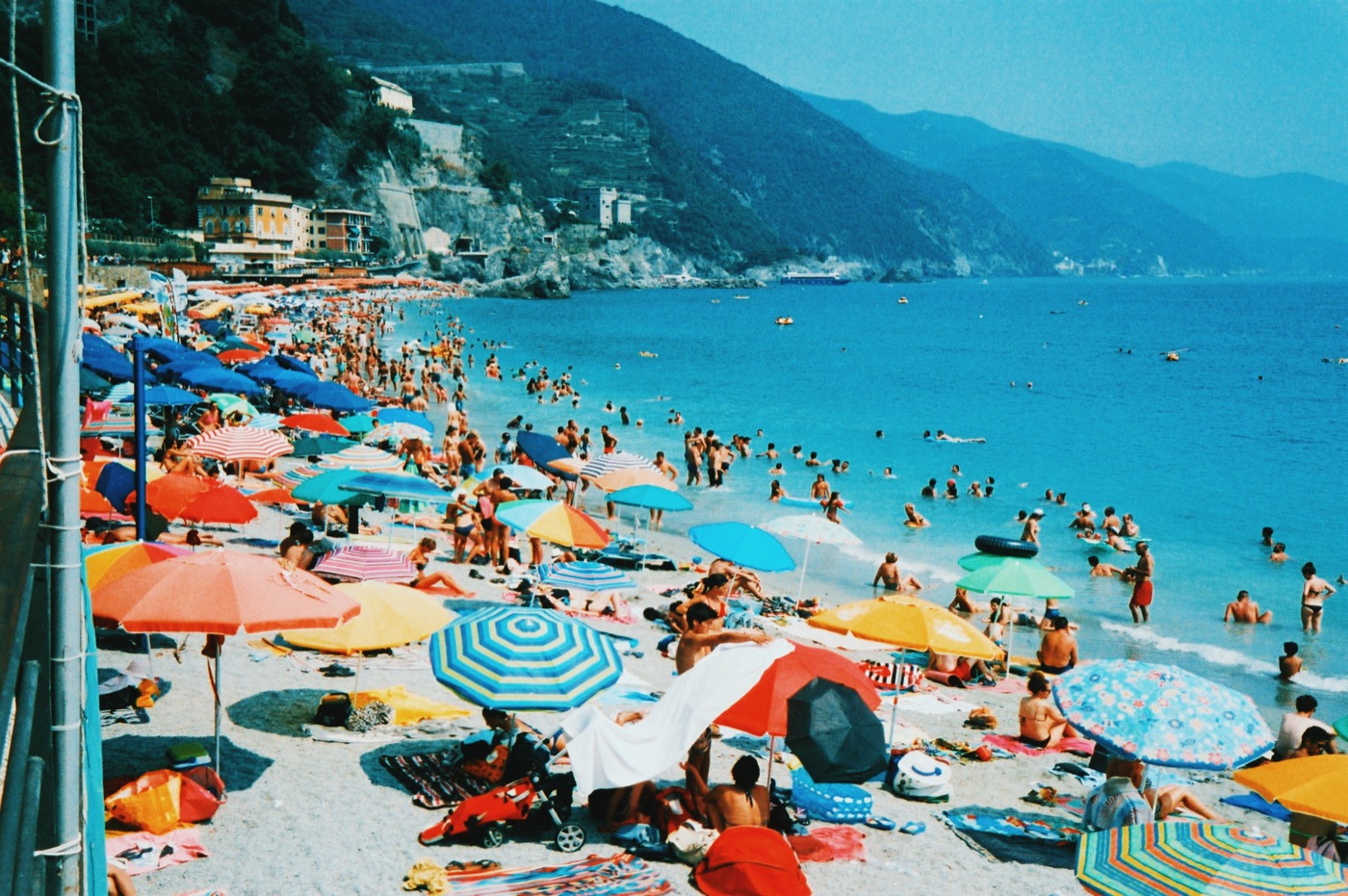 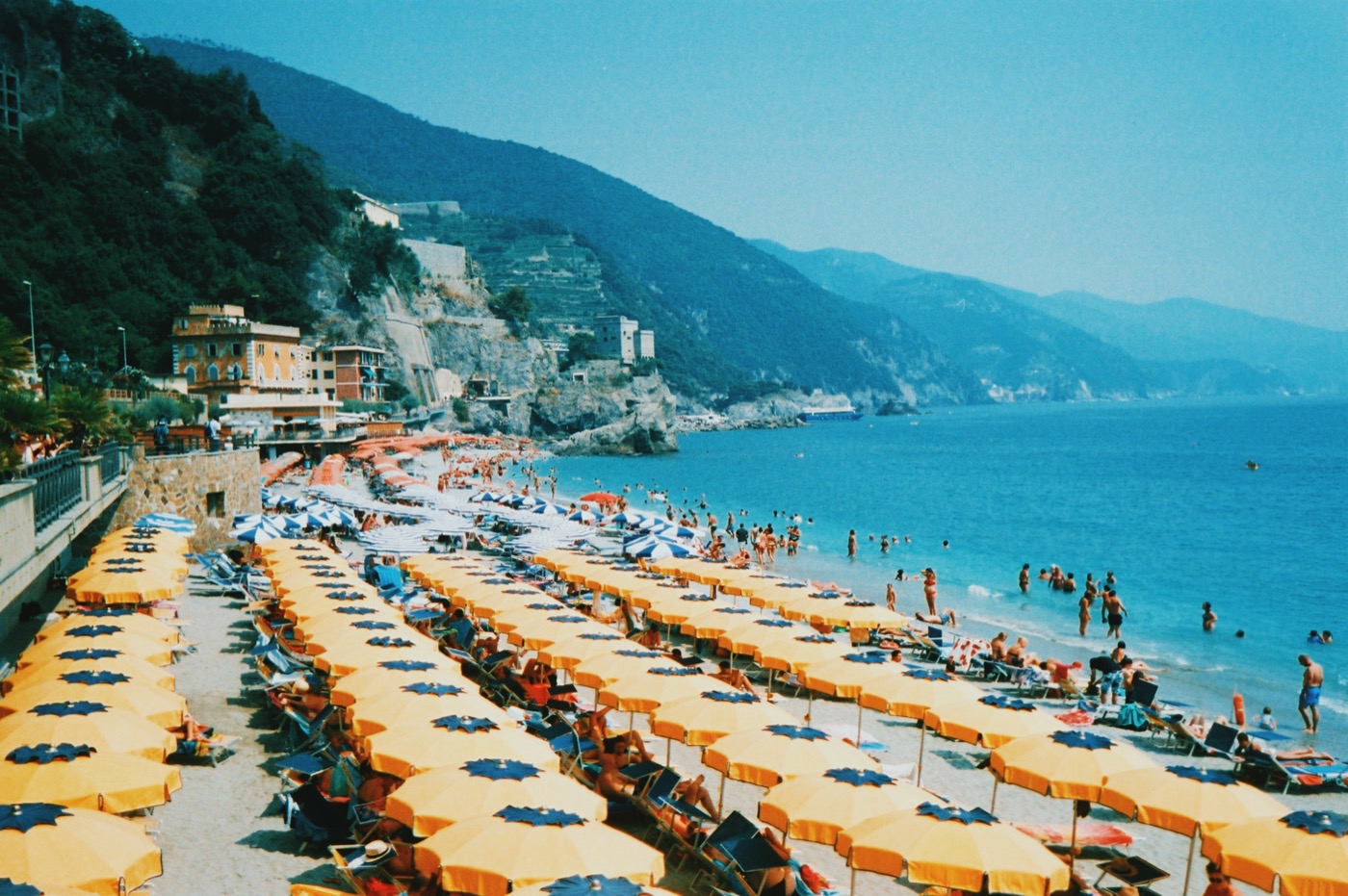 The beach was long, but crammed full of people. There was hardly an inch of sand left anywhere, which made me pretty glad that we’d decided to swim back in Vernazza, instead of braving the crowd here. 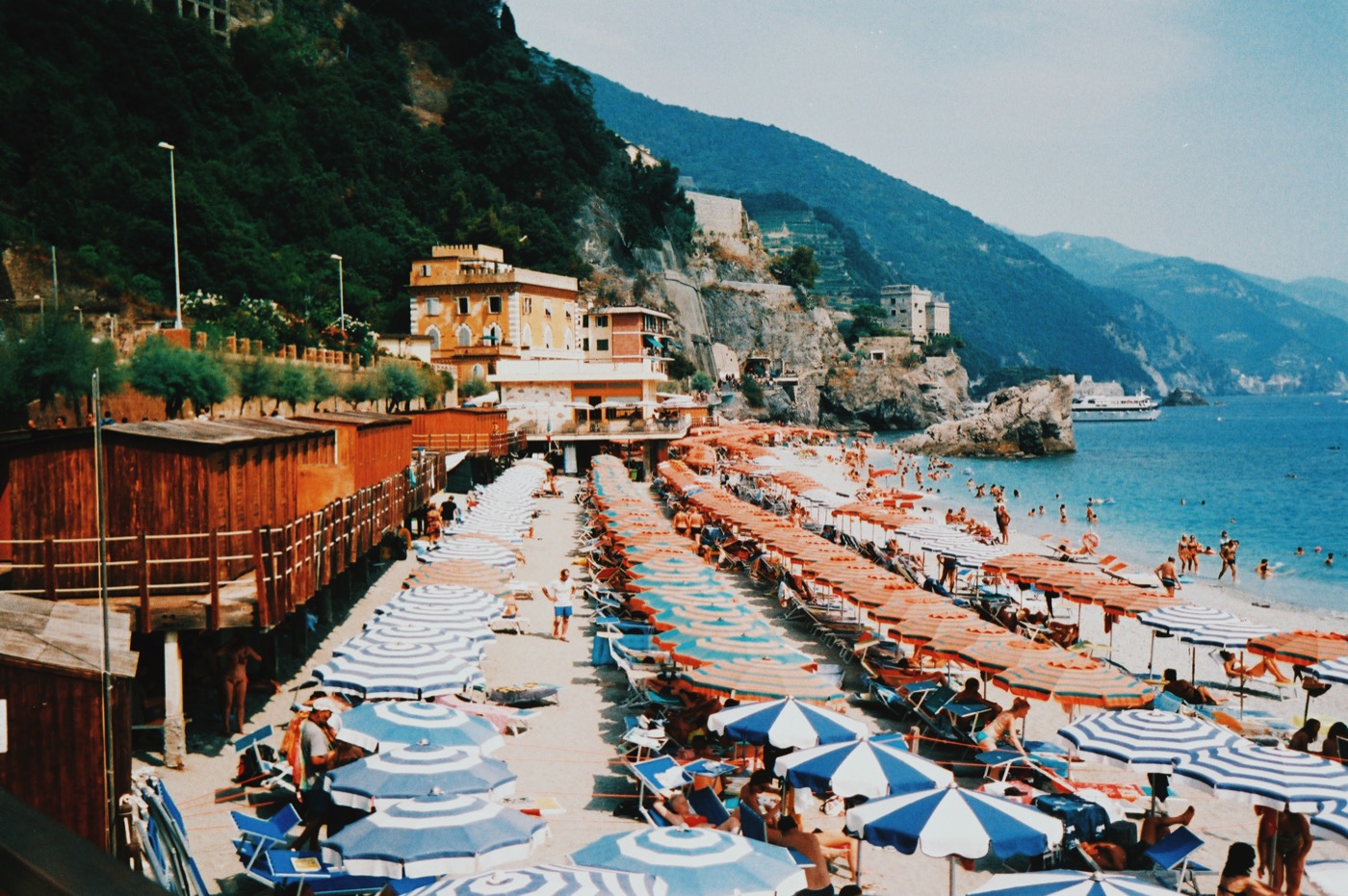 There was the selfie-stick brigade out as well. Not in the same force as Rome or Florence, but still seemingly omnipresent. 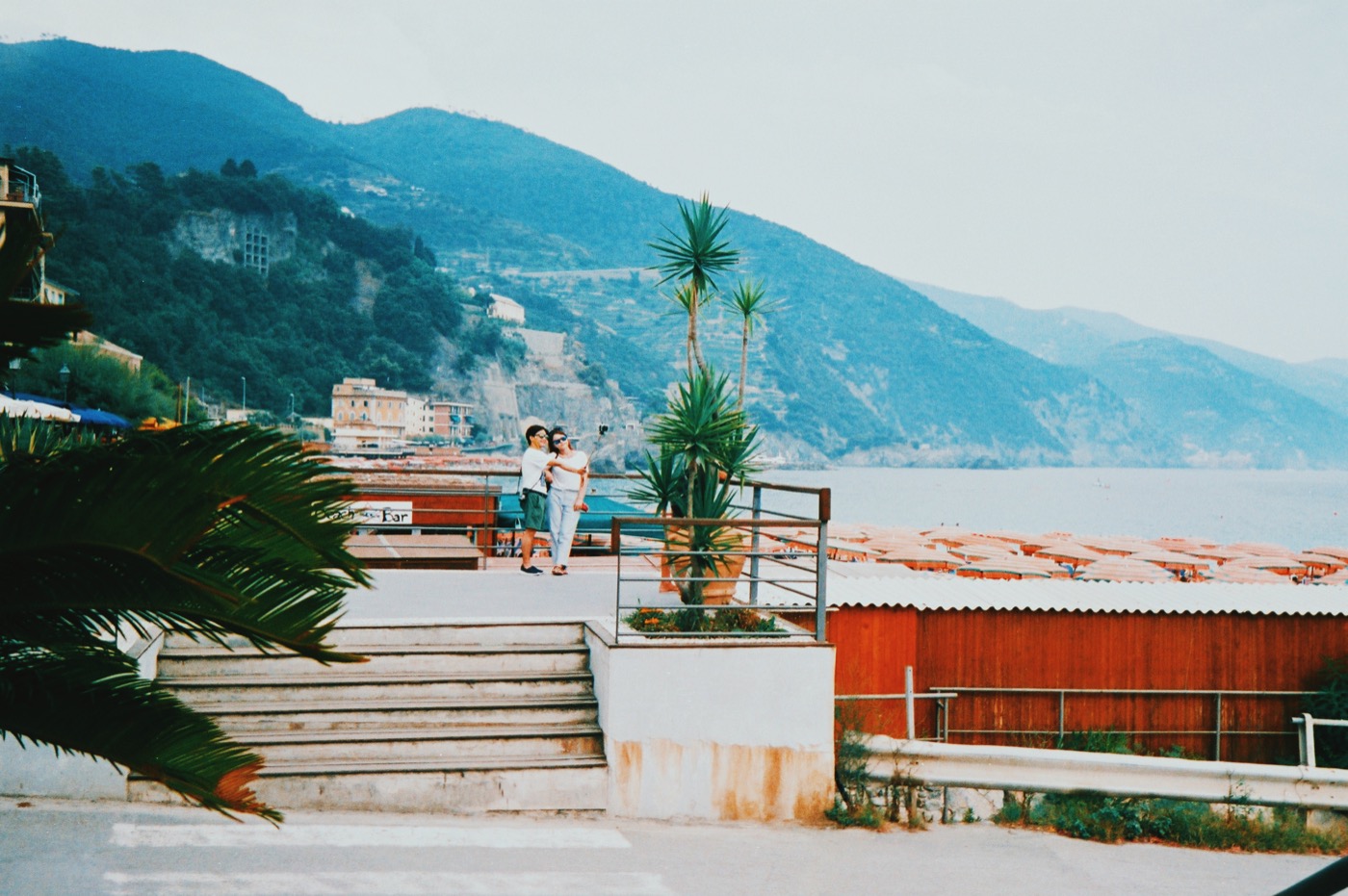 Since it was meant to be a much bigger place than the other villages, we went a wander to explore a bit. 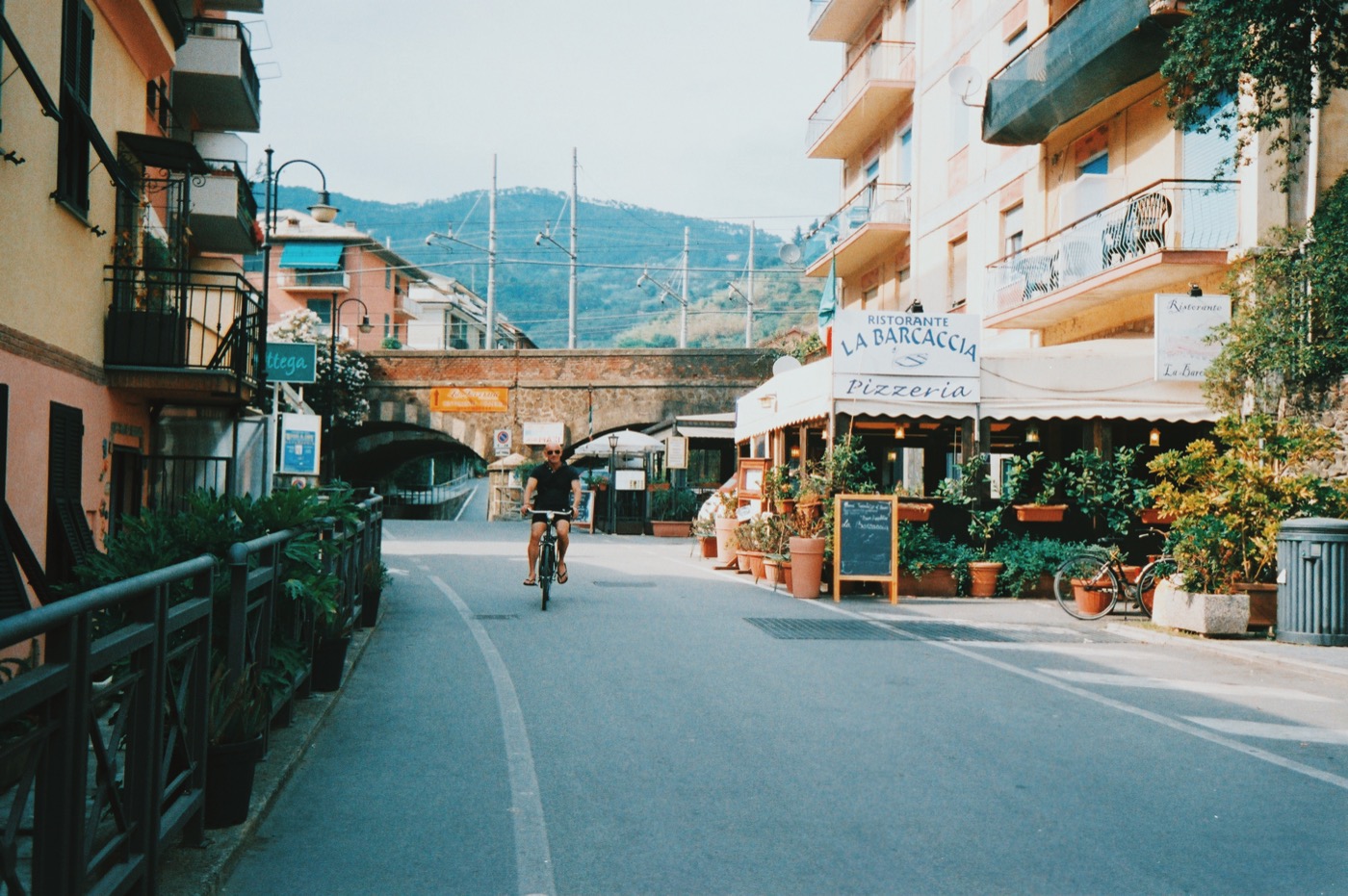 We didn’t find a whole lot, except a bunch of hotels… 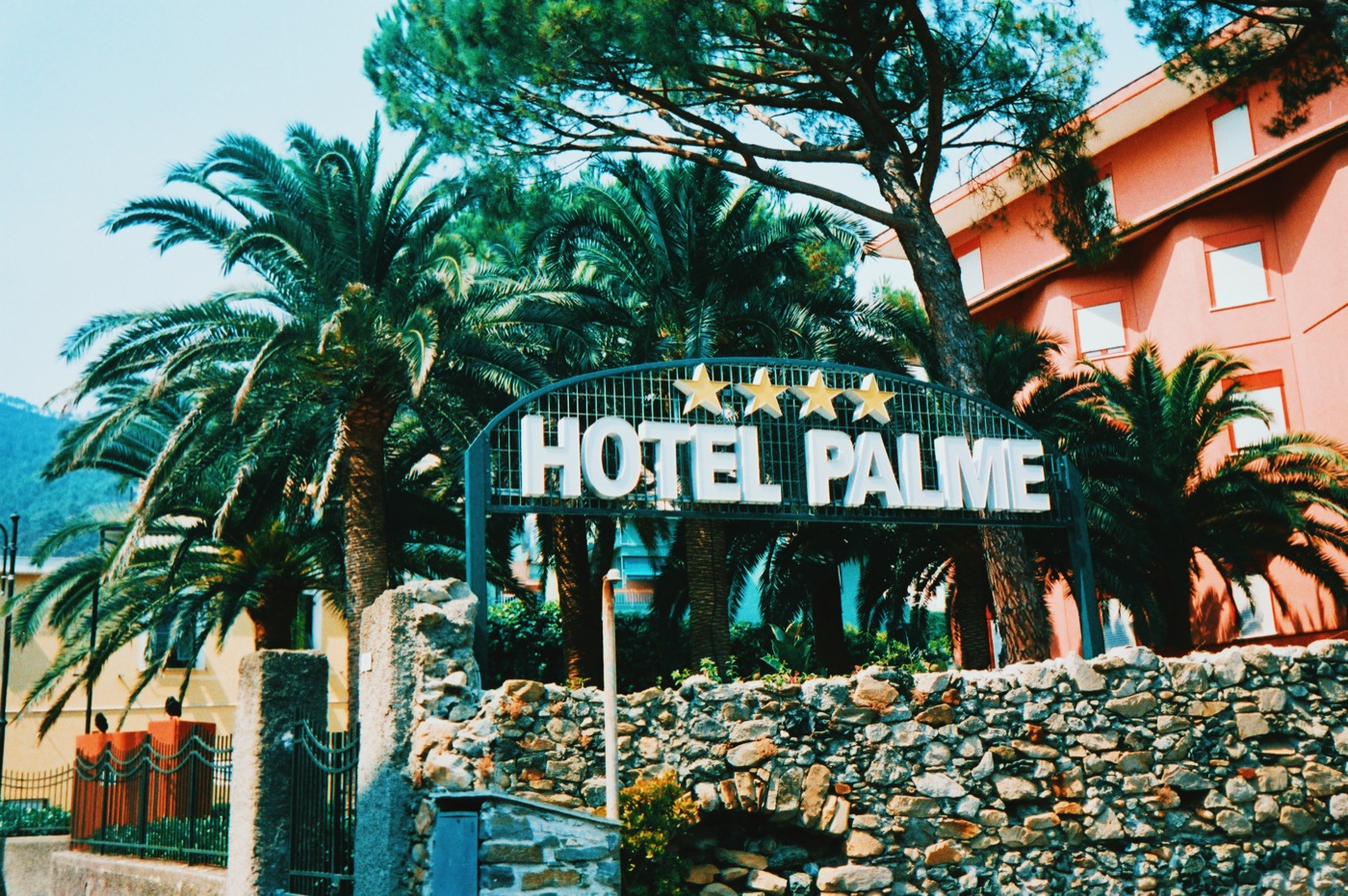 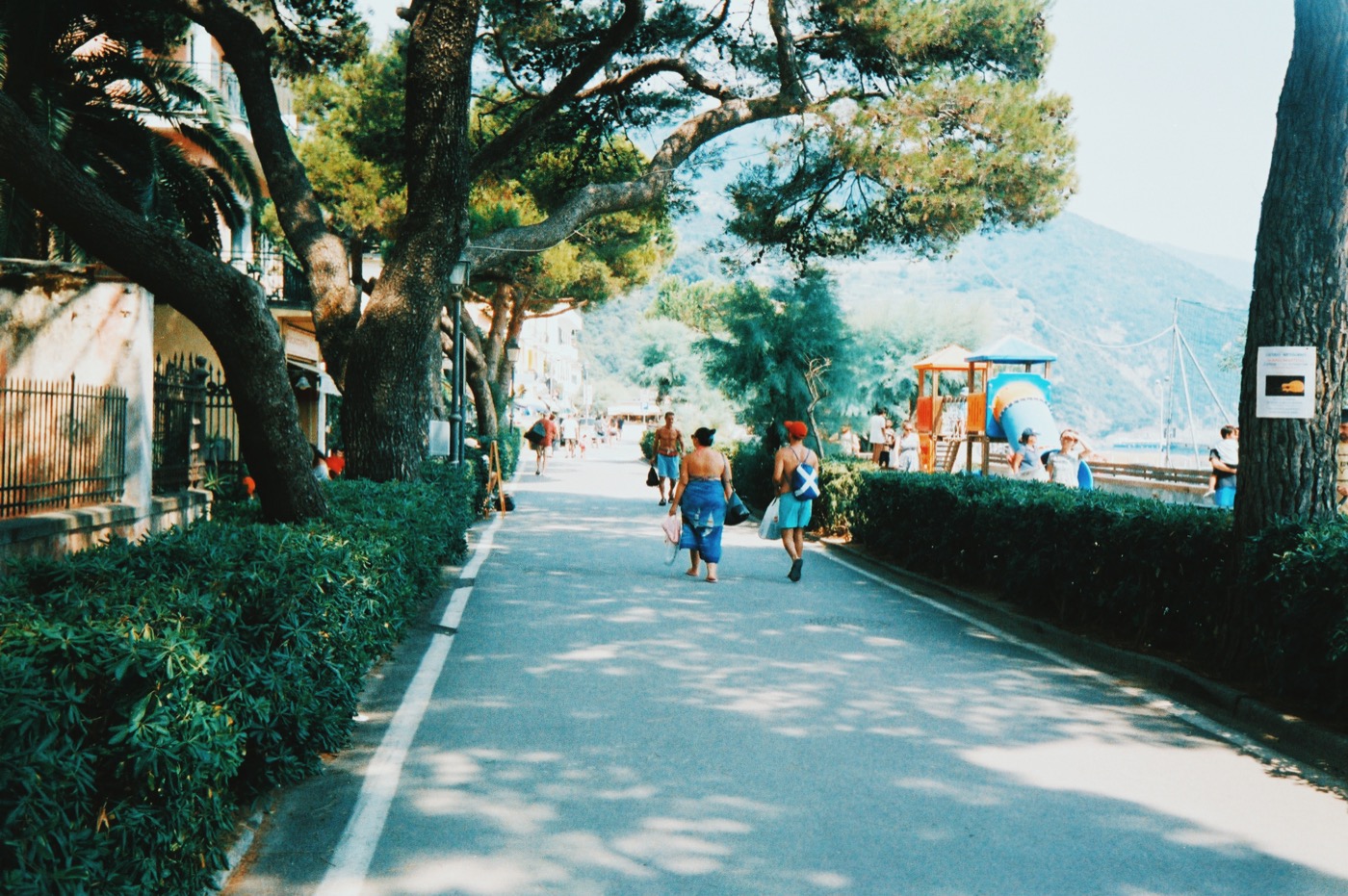 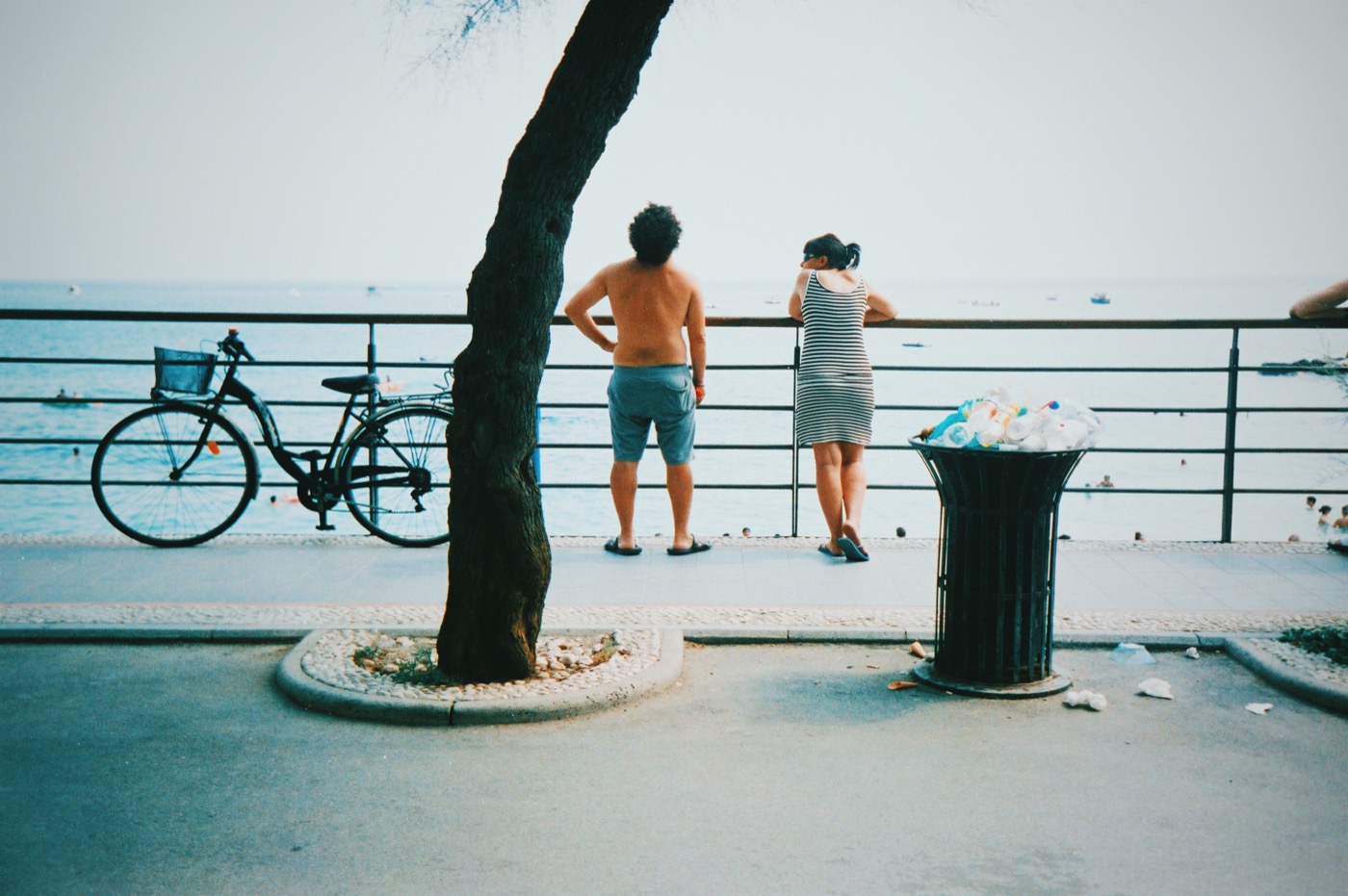 I don’t want it to seem like I’m just pure slagging off Monterosso, as it is clearly a beautiful place, and there was plenty of people seemingly having a good time. 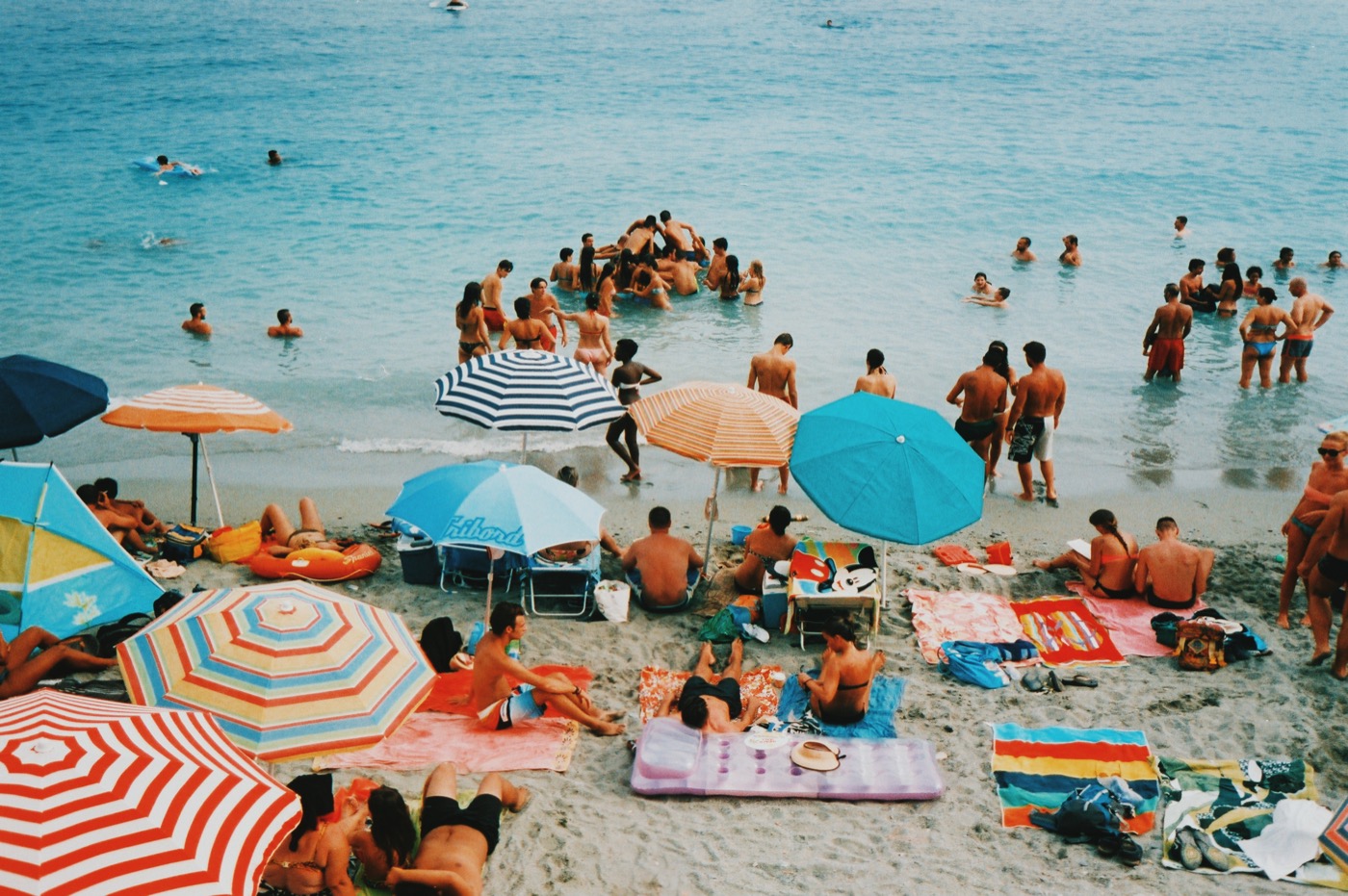 There’s just no way of dancing around the feeling that there was a lack of character about the place; having been completely co-opted as a seaside resort town. It wasn’t even somewhere that I’d choose to go back to if I was looking for a beach holiday, as it was just so small and crowded. Out of all of the notes I took on the trip, the single thing I wrote down about Monterosso is telling: