We were far too hungover to venture out of the flat except to have dinner (and more drinks) after our big night on the tiles detailed in the last post, so there isn’t much in the way of pictures from then.

The day after though, we headed out to Coney Island on the subway – right down at the Southern tip of Brooklyn. As soon as we got on the train, I knew I would have to take a picture of this next guy; he just looked so fantastic.

As he left the carriage he asked me how many megapixels the camera was, and I told him that I liked his hat. Grace said it was pretty awkward as he had clearly spotted me taking his picture, but I don’t think he seemed all that bothered. He looked dynamite. I want to dress that well when I’m older. 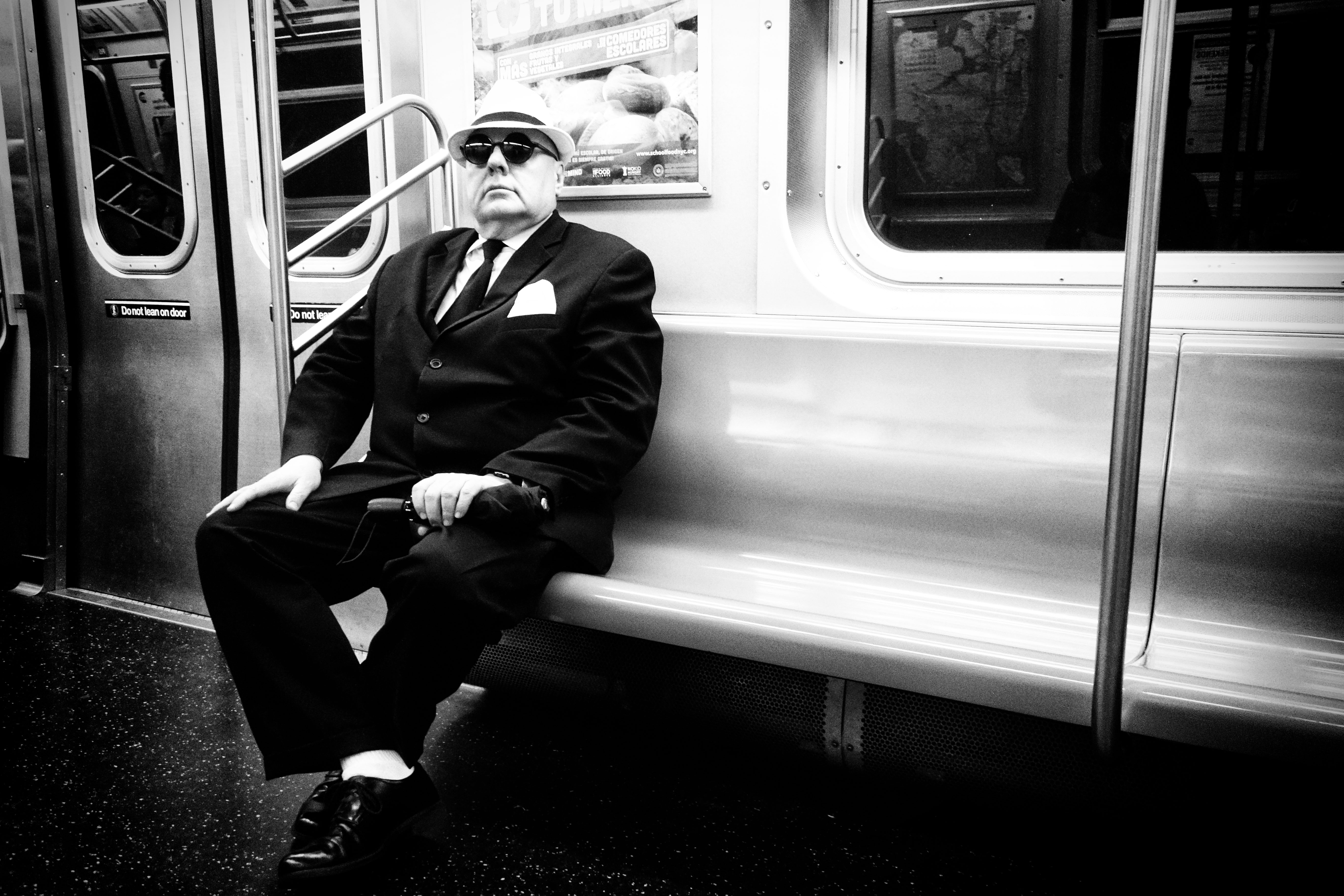 Coney Island itself was a riot of colour, especially with the sun beating down on the boardwalk. I cracked out the M6 to make the most of it with some film – so those will need to come later. The RX100 held its own in the meantime though. 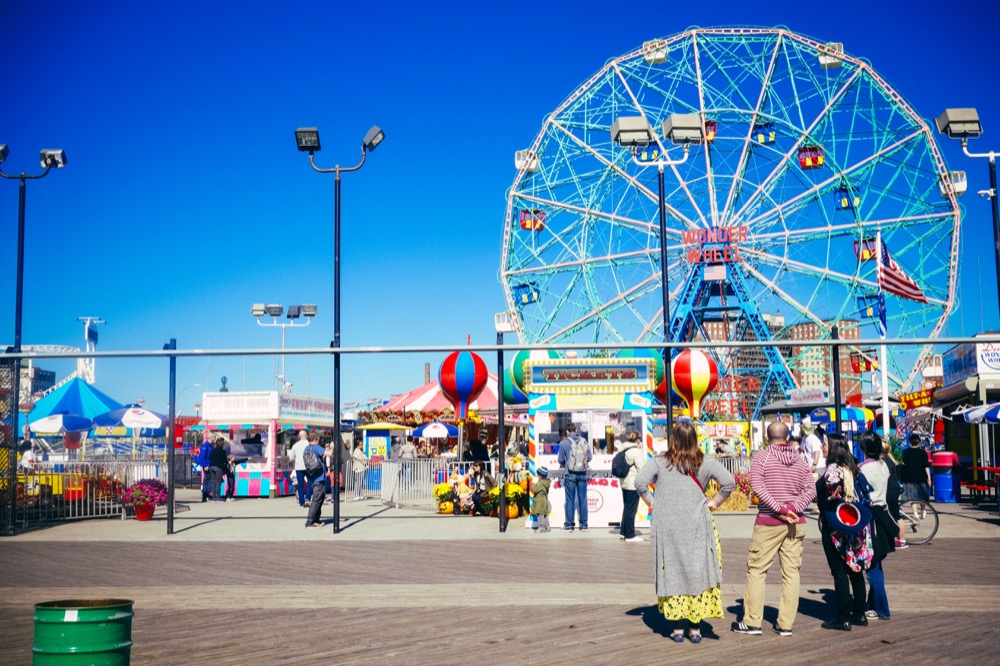 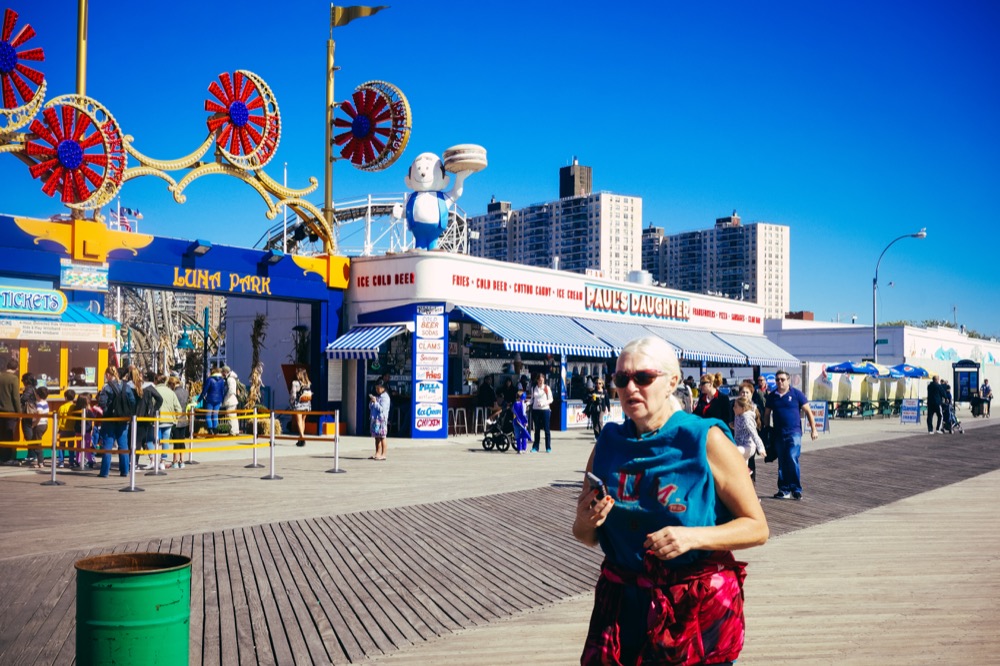 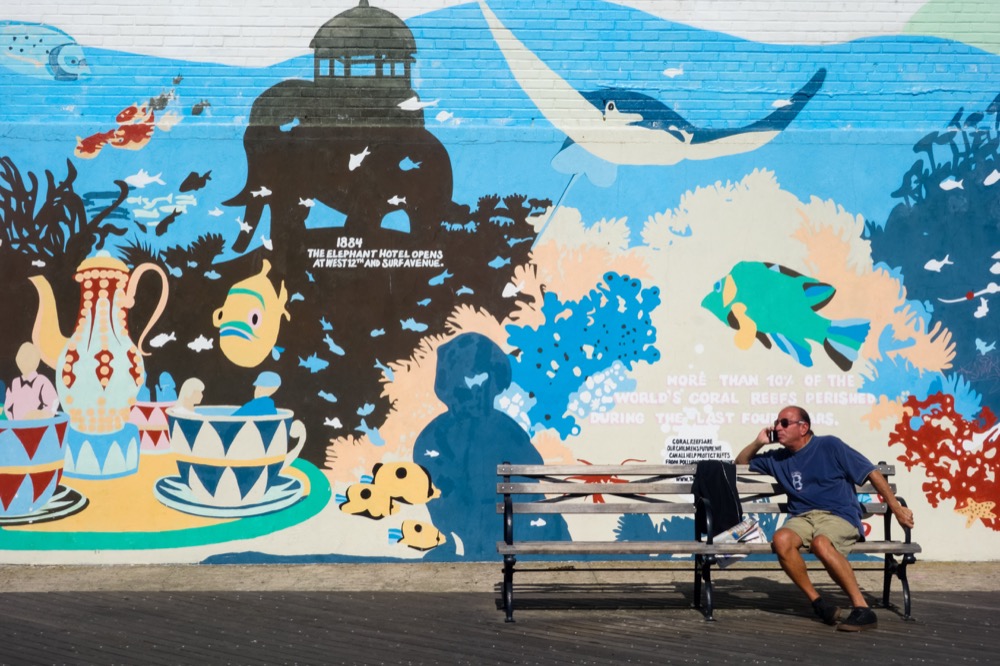 We had cheese fries and hot dogs, and watched people on the beach with their metal detectors. 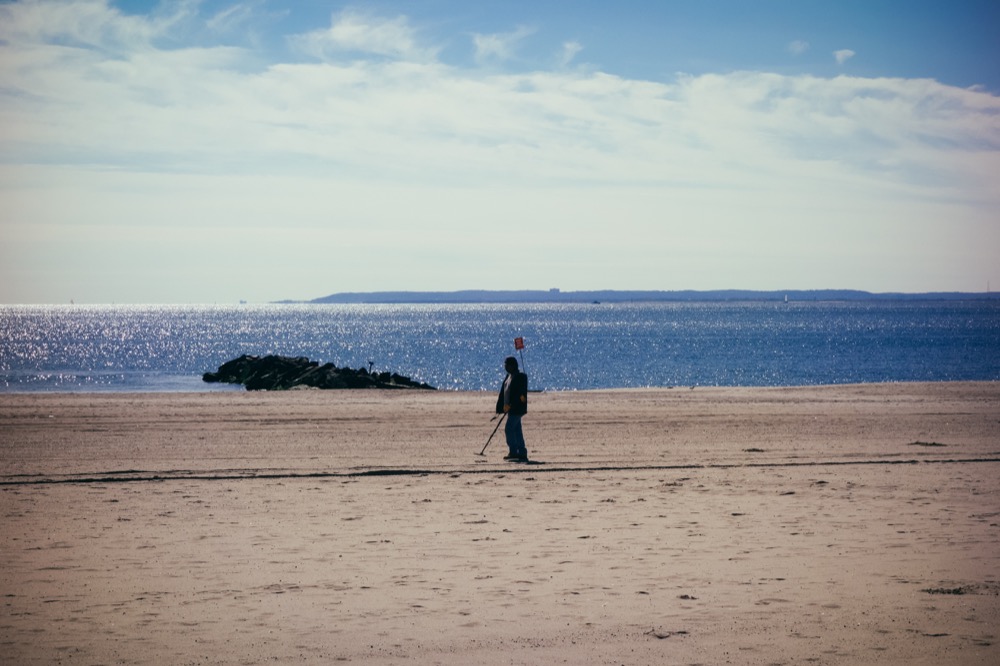 Our pal Caroline came all the way down to meet us with her boyfriend which was nice. No pictures of them yet though. They’re patiently waiting to get developed. 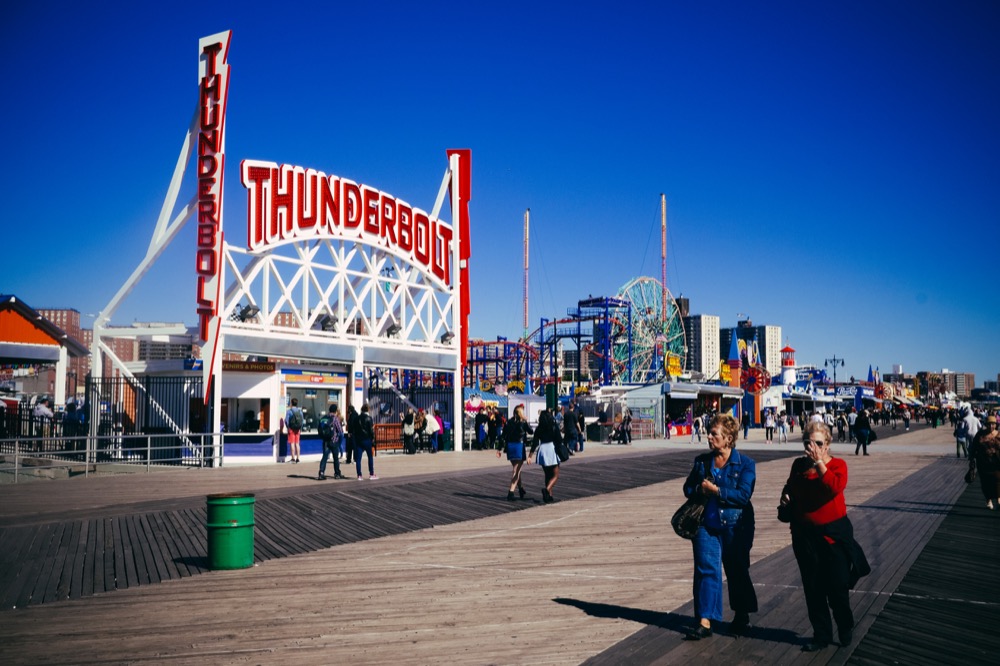 We did not partake in going on rides. 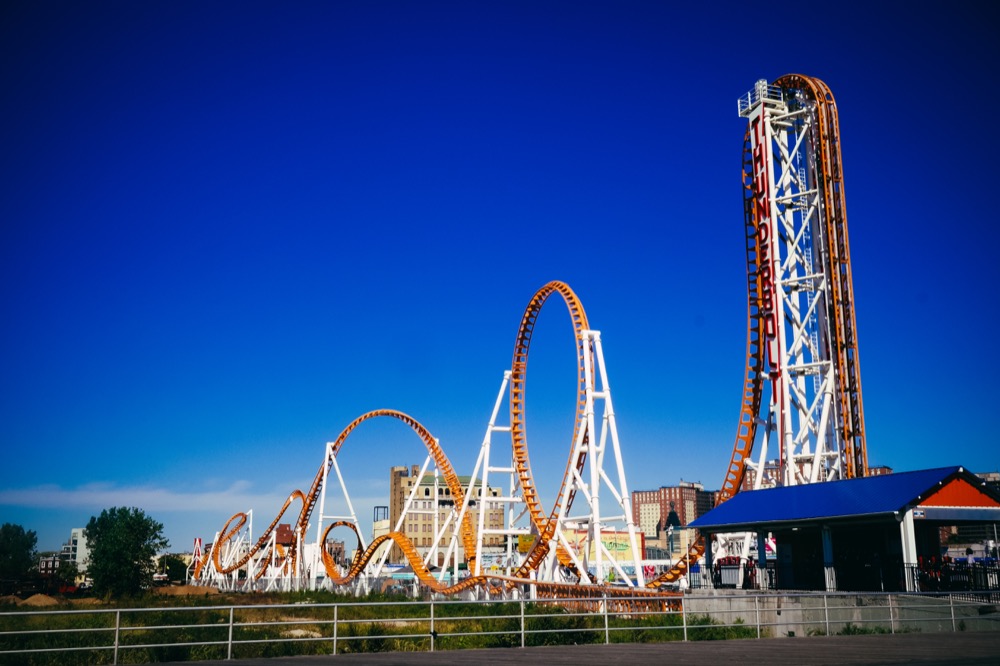 The colours were beautiful, even in the harsh daylight. 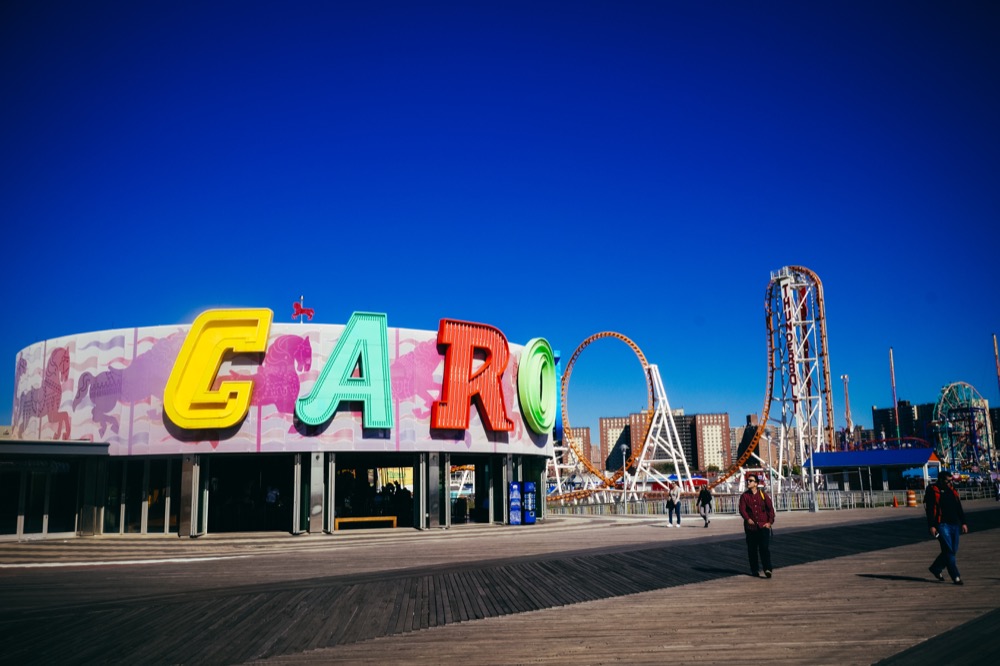 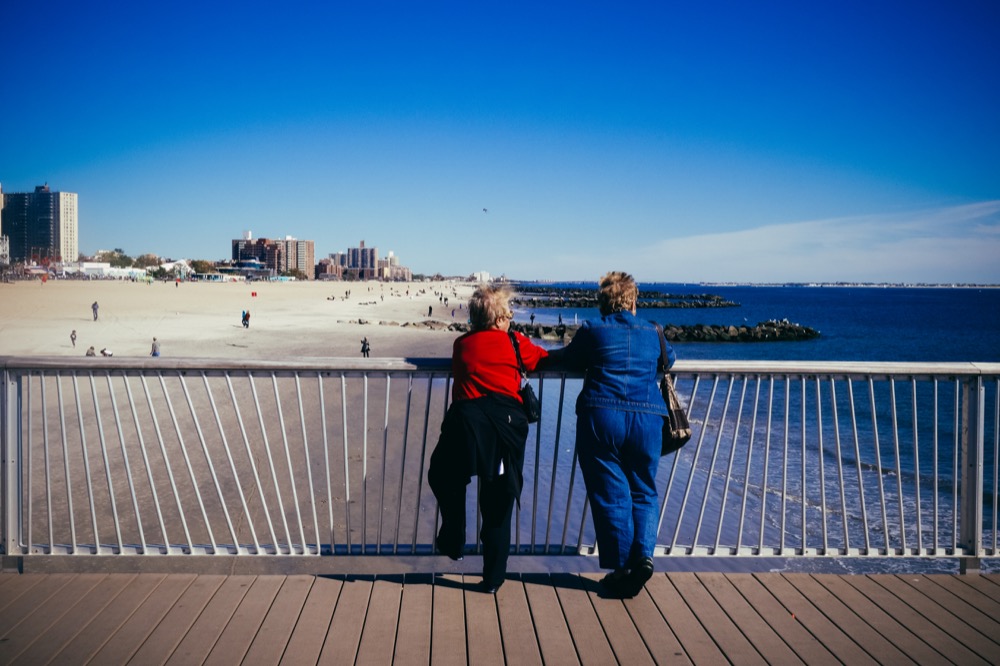 It seemed crazy that this place is part of the same city that holds Times Square. 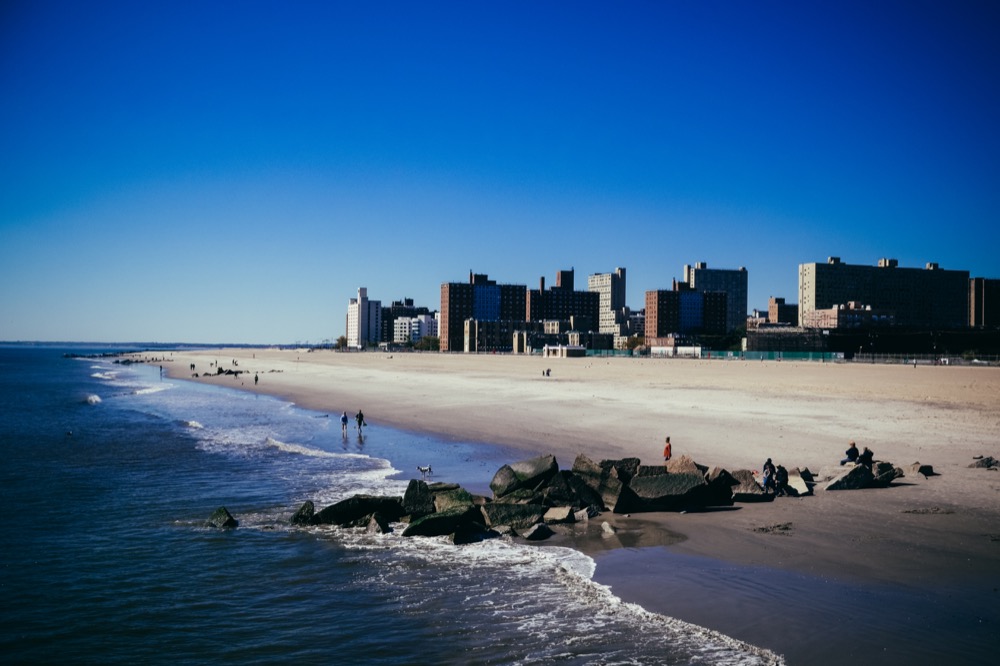 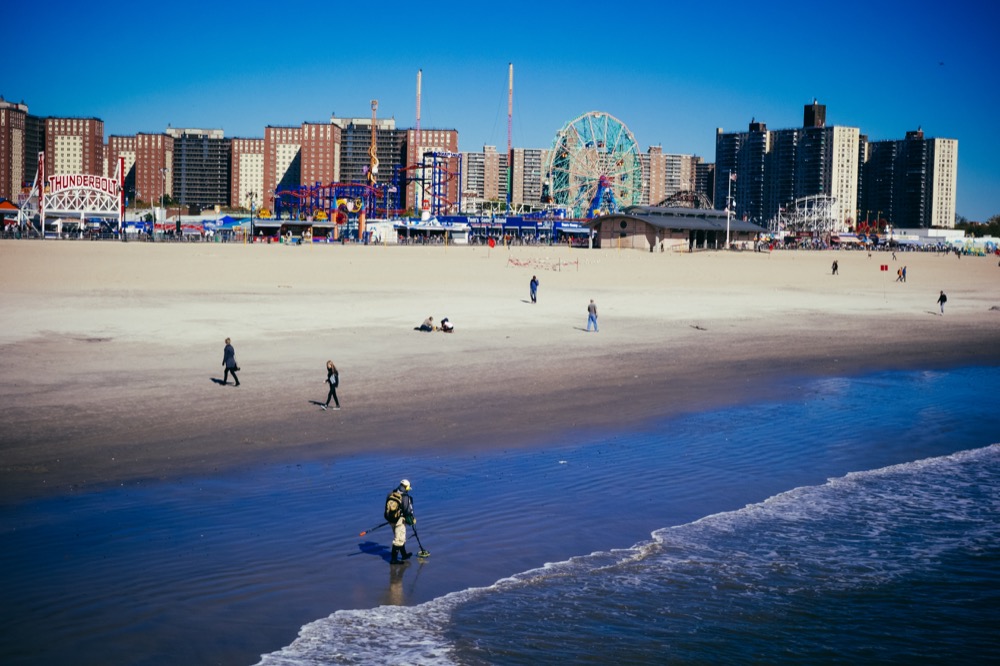 The way back took a while, but there was plenty to entertain us, such as this woman with a pineapple: 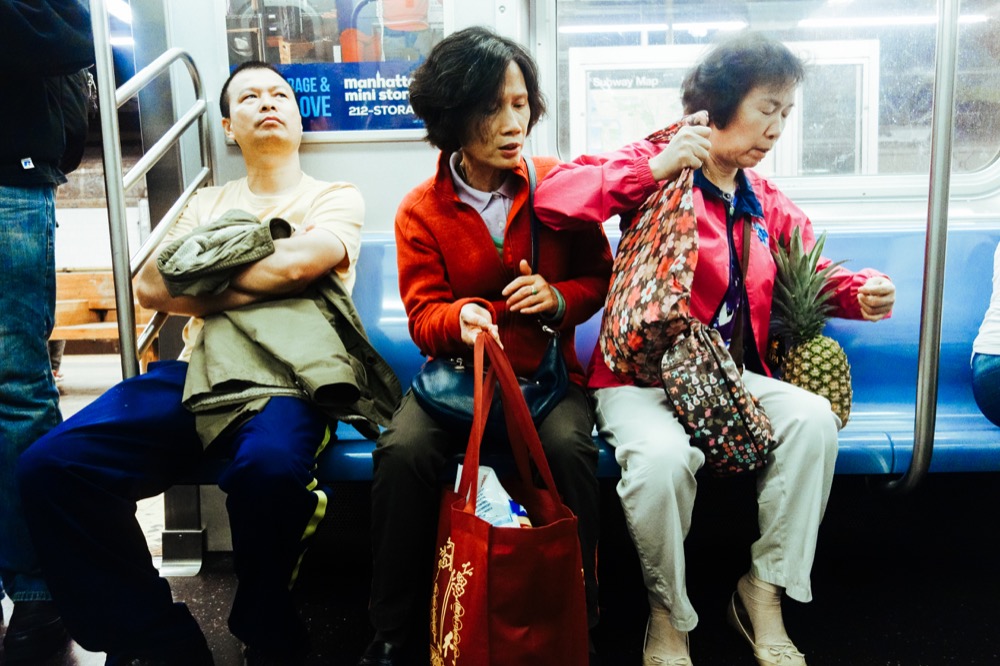 We met another friend who I knew from a few years back whilst couchsurfing in Chicago, and went for an early dinner in Manhattan. I had gluten free fried chicken and waffles, which sounds terrible, but was actually amazing. Oh so wrong, but oh so right. Well, mostly right. They did manage to leave one of the pieces of chicken completely raw on the inside, but hey, what’s a bit of food poisoning between friends? 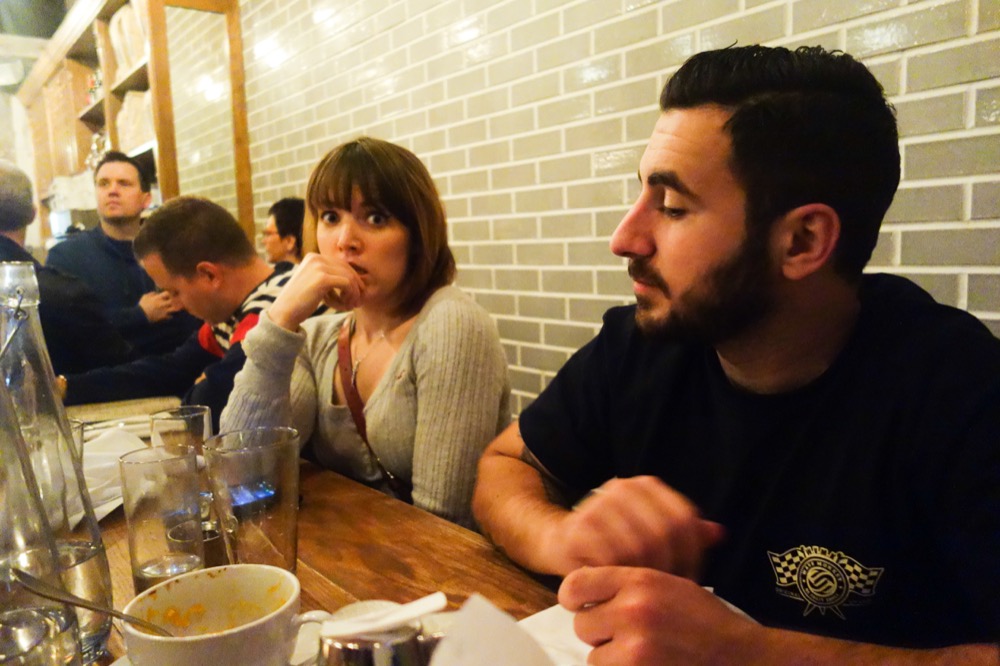 It was really nice to see Leeann and her boyfriend (as well as Caroline), as brief as both the encounters were. It gives you a bit of faith in humanity when you have these fleeting experiences in different places, and maintain connections with the people involved for years after that – despite being spread out across the globe. 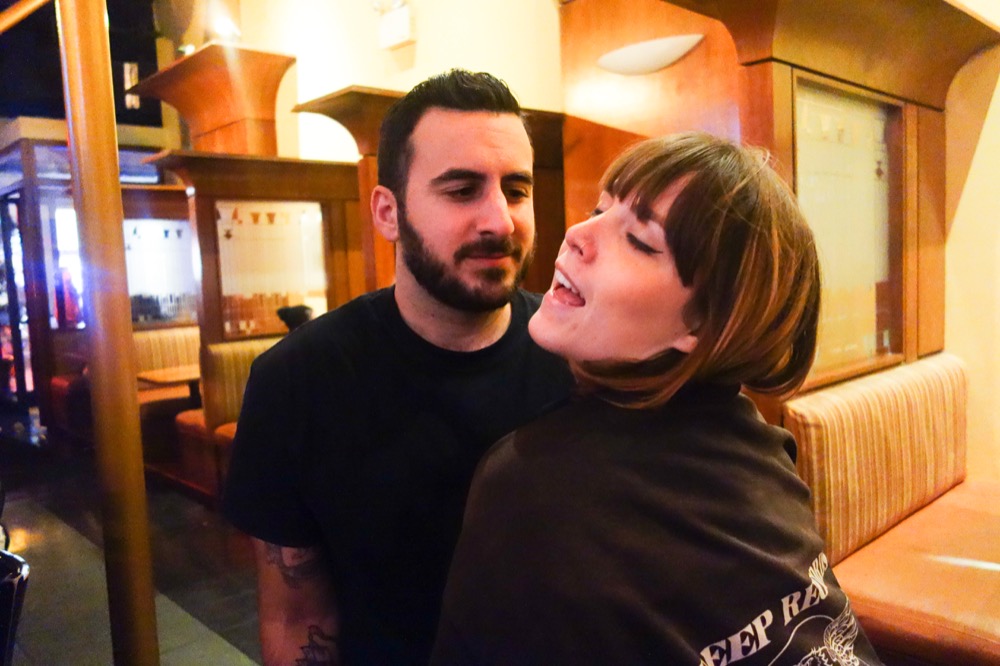 We did shots, and parted ways – as Leeann had to be up at 5am to answer phone calls from crazy people (ah, the magical world of local television) – then headed down towards the financial district to see some more of the city’s sights. 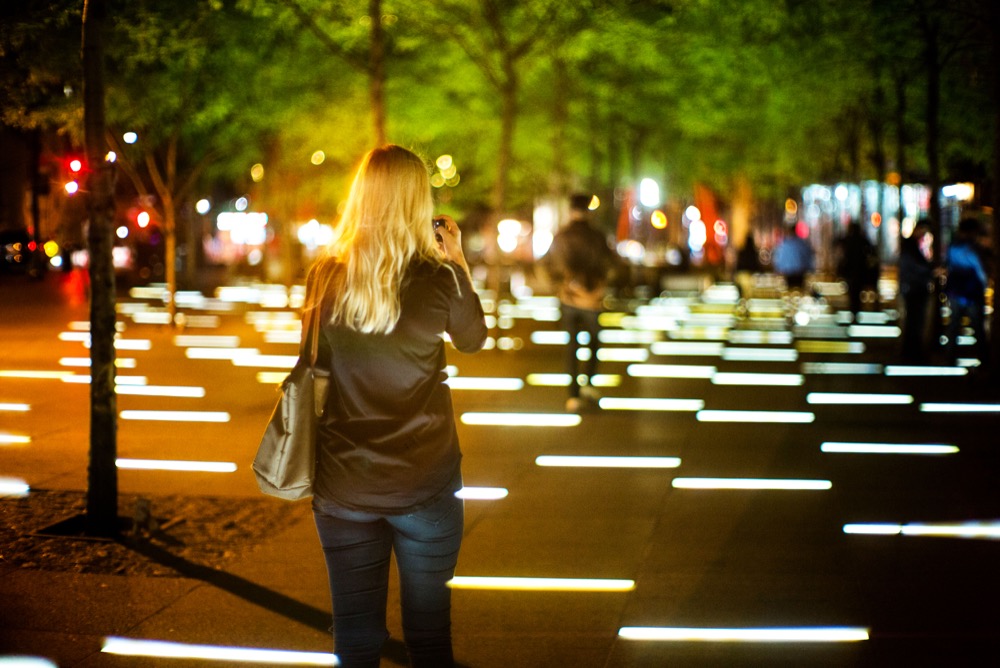 One of them was where the Twin Towers had stood, which now was home to not only a new building, but large waterfalls that marked the footprint of the old ones. I remember watching the attacks on September the 11th after coming home from school… and not really being able to take in what had happened, as it just looked like something out of a movie. I also remember the moralising and rationalisation that took place afterwards, especially in Europe. ‘Well, that’s what happens when you pursue an aggressive foreign policy’, etc. etc. It’s one thing to make such political arguments from afar, and quite another to stand there in the middle of these huge skyscrapers, in a city filled with life, and imagine not only a plane crashing into one of them (but two)… but also them then completely disintegrating afterwards. It’s too much to take in.

I didn’t really take any pictures down there. 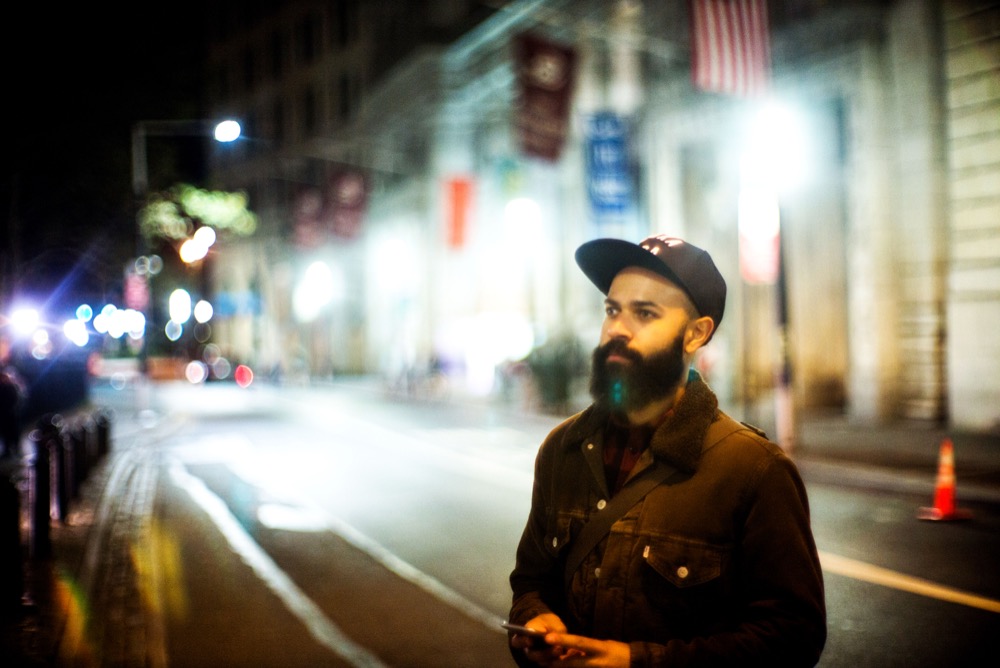 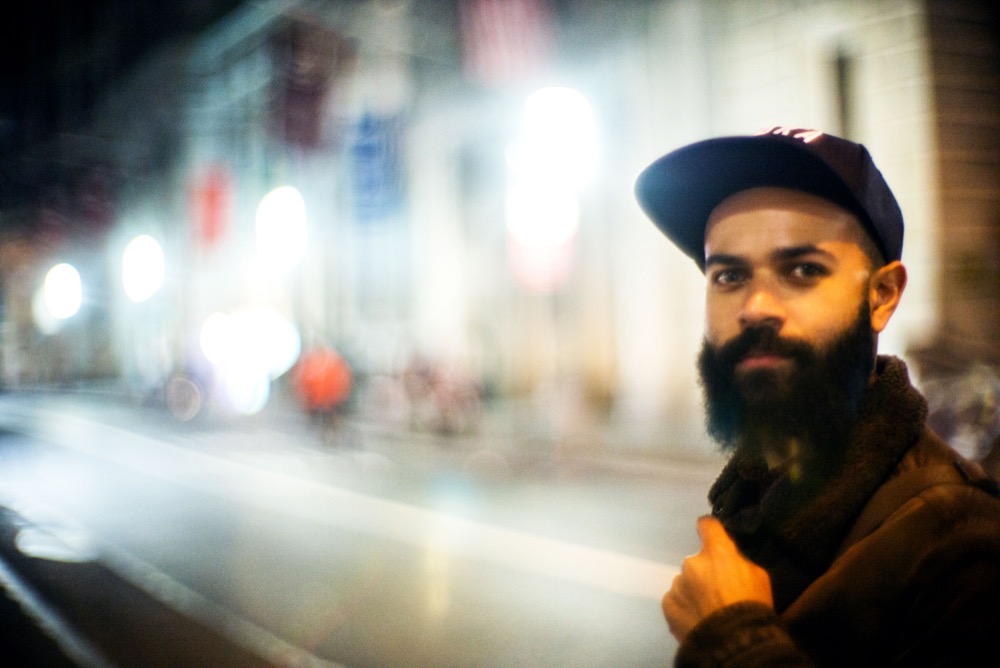 I did take photos of another famous landmark though: The Charging Bull. People were particularly taken by its balls. 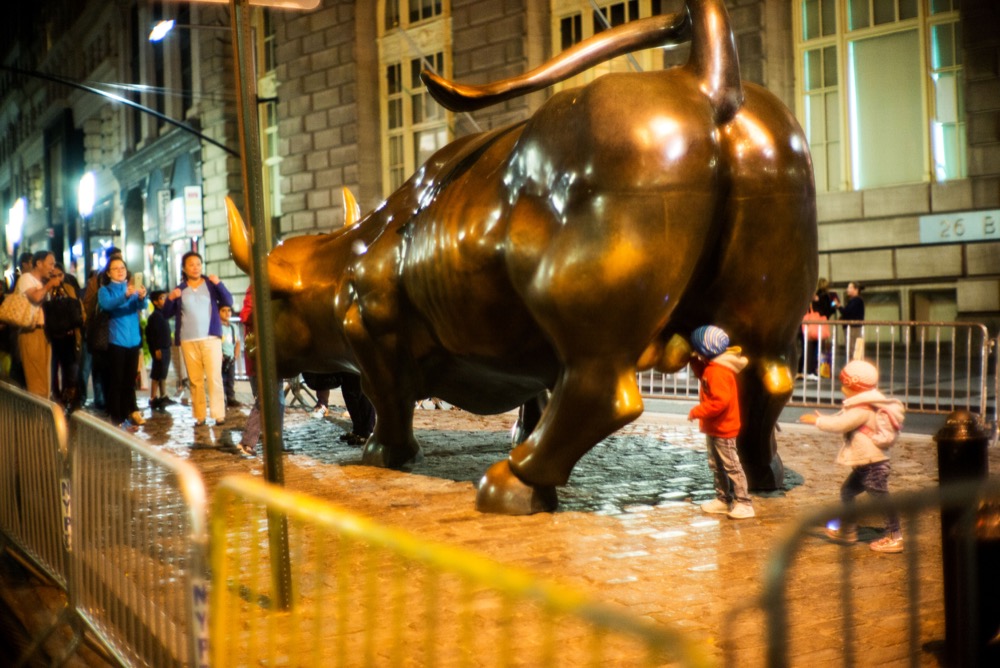 Apparently the sculpture was originally a piece of guerrilla art – installed by someone to represent the nature of the American economic recovery, as the result of hard work and determination. The police impounded it at first, but it was then reinstated after a public outcry. I wasn’t really a fan of the bull before I heard that story. 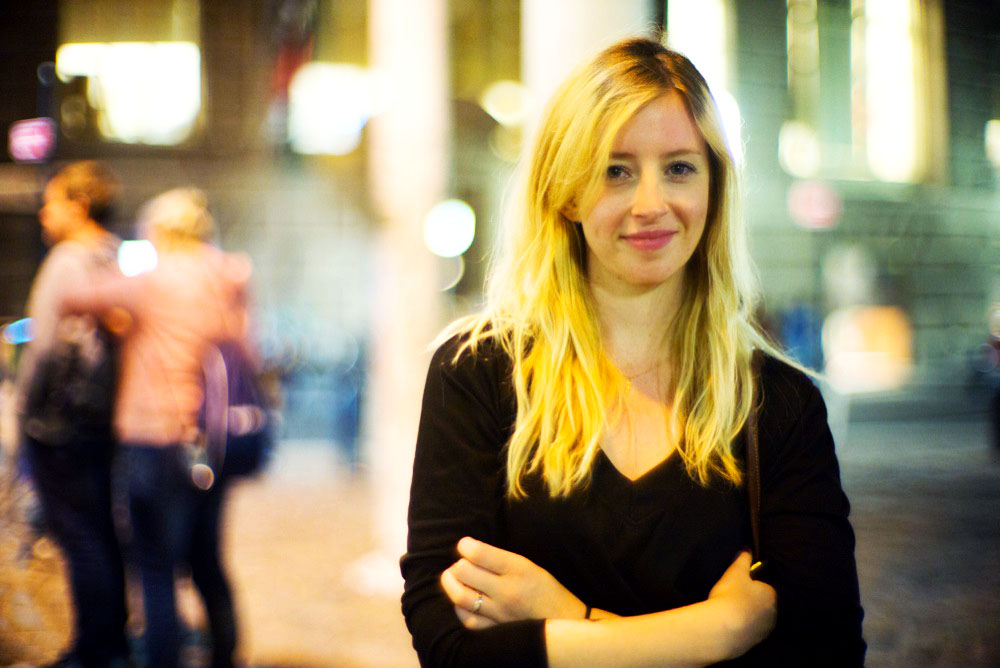 I was pretty knackered by this point, but we forged ahead to visit what the Americans would call a ‘dive bar’, filled with bright lights, loud music, and grungey clientele. Oh, and not to mention over-enthusiastic bartenders swinging cloths above their head to encourage people to buy drinks (and tip, of course). No photos here, for obvious reasons.

We had a bunch of beers and whiskey shots (because that’s a thing here), and me and Watkis went on to play a rousing arcade game called ‘Deer Hunter’. He won, but only just – going into some sort of mad trance and blasting the chameleons onscreen like a man possessed. Meanwhile someone was trying to chat Grace up at the bar, by asking if she was hanging out with us just because of our amazing beards, and that they made him feel emasculated. Not sure that’s the best tactic, but glad he recognised greatness when he saw it.

‘If your dad doesn’t have a beard, you’ve got two mums’.