A couple of weeks ago our pals Al and Becky joined us out in Greece for a week. We took the chance to visit the island of Santorini together, as it’s just a quick hop over from Athens by plane. I’ve been slow in getting these pictures up as my Leica’s sensor was apparently covered in dust. It’s not been a fun discovery!

We arrived just before sunrise, and decided we should have a wander around as it began to get light, as chances are we wouldn’t be awake at that time again. Our hotel was right on the end/beginning of the town’s front, and so we got to explore the tiny streets from the bottom up, with the view getting more and more impressive the further we went.

We were all a bit groggy and delirious, so we probably didn’t really take in how amazing it was at the time. We were the only souls around at that hour aside from the odd man leading a trail of donkeys down the cliffs, and it wasn’t till a few days had passed and we’d seen the place teeming with boat loads of tourists that it became clear how lucky we’d been that morning. 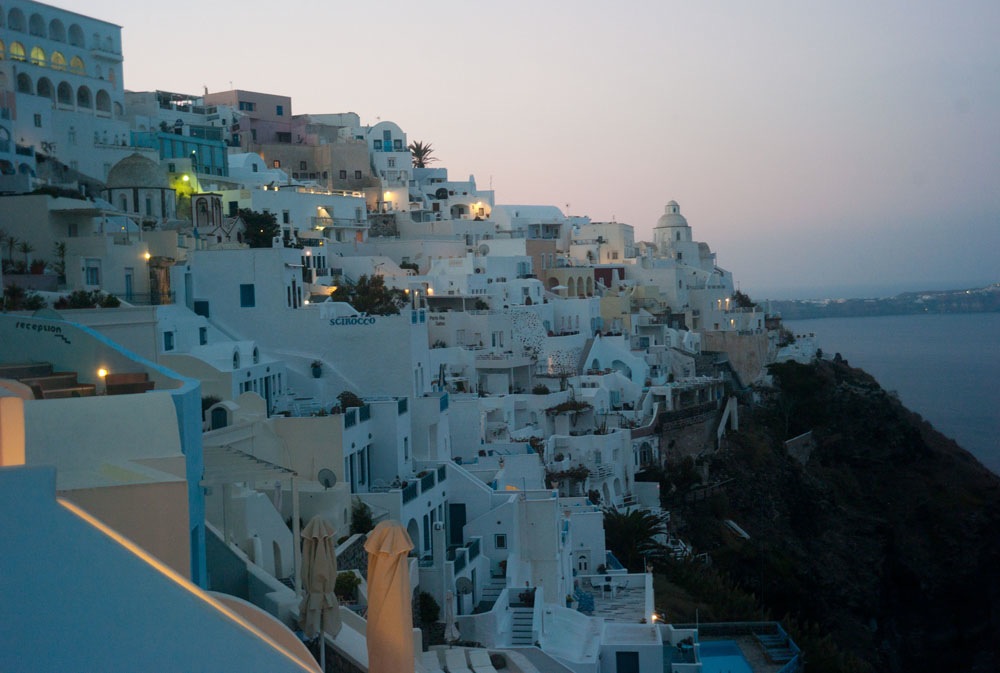 There are some strange buildings kicking around that seem to have been half finished, or closed up indefinitely. Perhaps as a consequence of the crisis?

The view really is unlike anything you’ll see anywhere else. In Al’s words, it was almost ‘oppressively beautiful’.

If you’re not familiar with Santorini, there are a group of islands that make up the edge of an active volcano, with a large island in the centre created entirely from lava. The buildings of various towns such as Fira (the main one in Santorini) are built onto the cliff face looking outwards over the ‘caldera’, resulting in some staggering views. 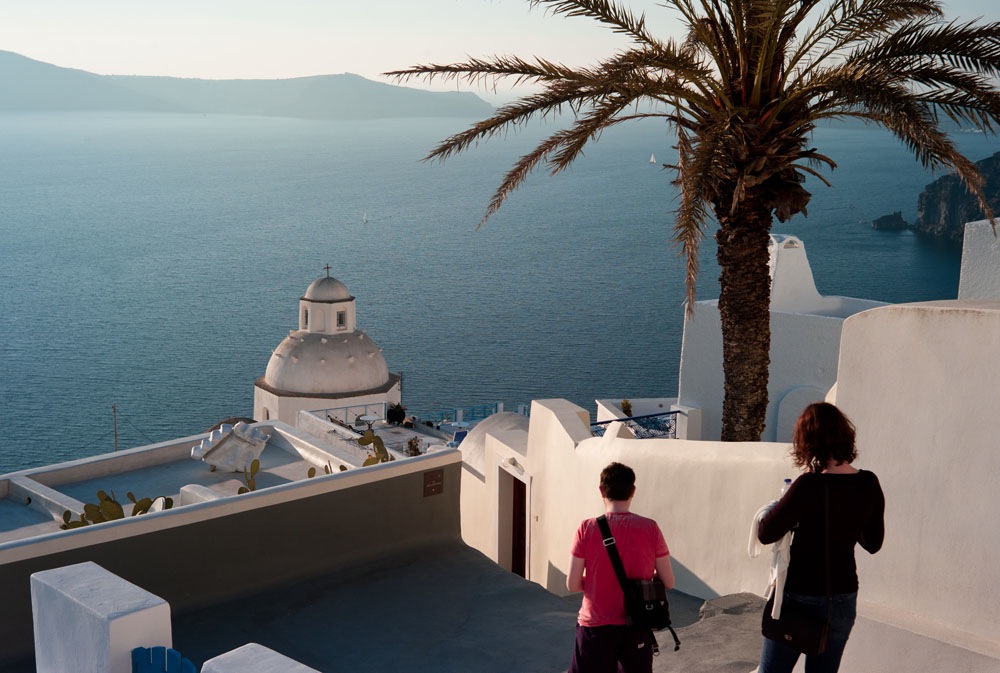 The streets themselves are small and winding, making their way through various colourful buildings and up tiny staircases – just adding to the atmosphere of the place.

I had planned to shoot a lot of these pictures in black and white, but to do that would be to do the place an injustice.

Just as in other parts of Greece, stray cats were everywhere.

One of the things that you can do whilst on the island is take a boat trip out to visit the volcanic island, and swim in the hot springs, so we did. How often do you get to say you are actually exploring a real volcano? I tried to get that scene out of my head in some doomsday film where people are skinny dipping in a similar location and get boiled alive by an unexpected eruption.

It also didn’t help too much that on my one and only previous trip to Santorini, I got stung by a jelly fish whilst swimming out to the hot springs, but that’s neither here nor there. We were slightly worse for wear after celebrating our travels by drinking a fair amount of Jack Daniel’s, then heading out to a local bar named ‘The Highlander’, which is owned and run by the family of an old school pal from Kirkintilloch. 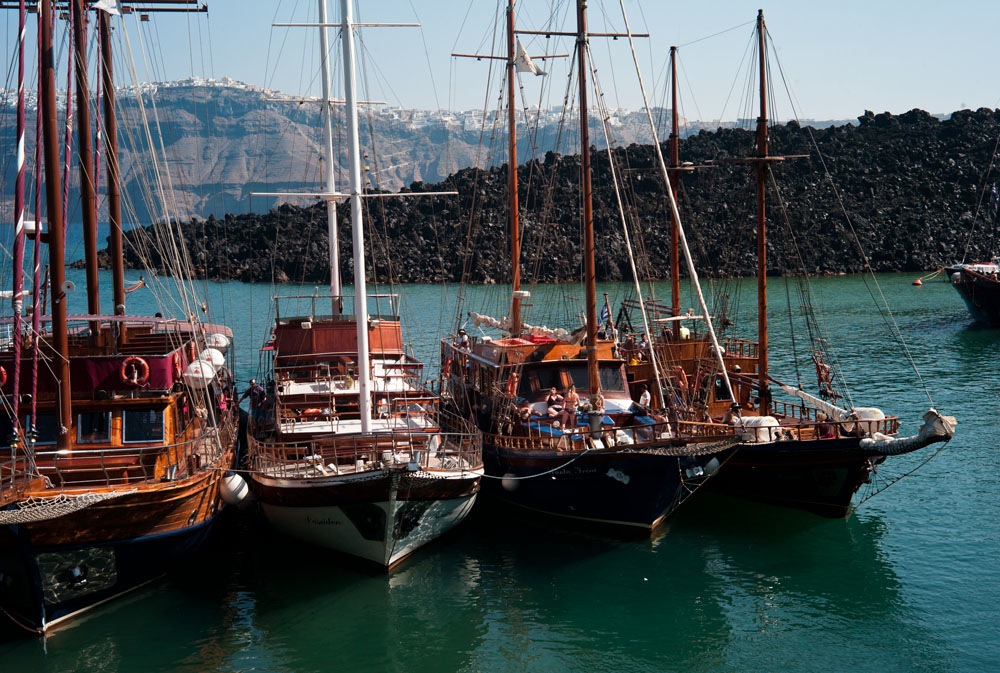 The lava island itself is pretty cool, though mostly for the views and the knowledge of what it actually is rather than anything particular interesting that’s on there itself (unless you’re more into geology/geography than I).

We witnessed a particularly hilarious moment where a South African tour guide spat the dummy at some women who strayed off the official ‘paths’, dramatically shouting: ‘You don’t want to die today!’. This became one of the memes of the week, with each subsequent rendition becoming more and more like Arnold Schwarzenegger. 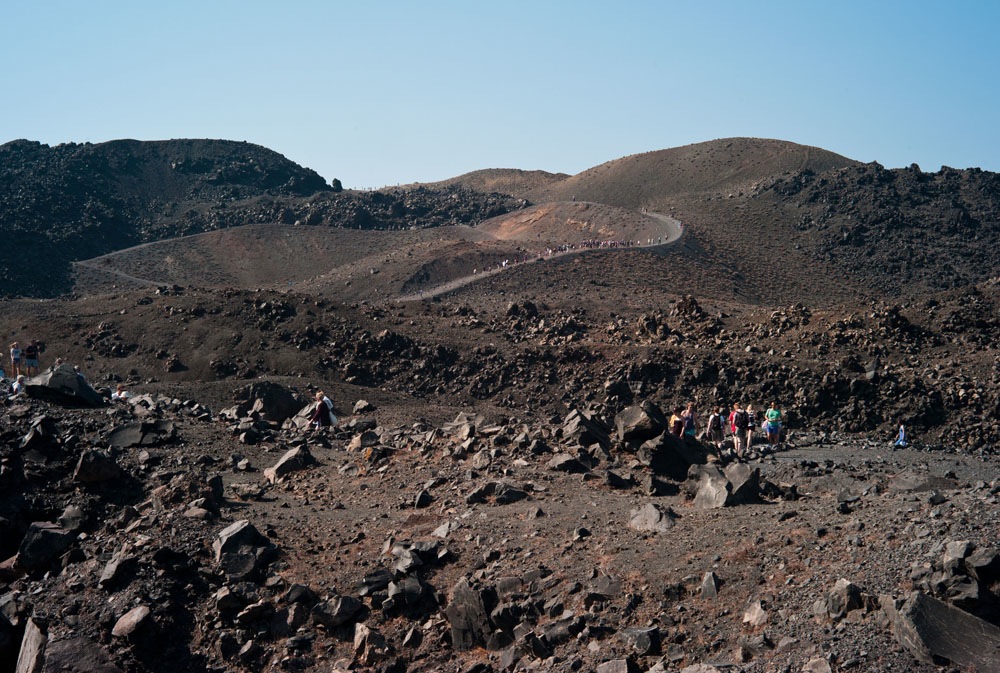 The Greeks that we were with, of course, couldn’t care less for rules, and so we wandered all over the place to get some cool pictures.

There are three ways to get to and from the port where the boat arrives and departs from. Those are either a cable car for 5 Euros each way, walking the steep path along the cliff face, or paying 3 Euros for a ‘donkey donkey ride’.

Ever cognicent of the lack of cash we had, I decided not to fork over another bunch of Euros to the cable car operators when I had a perfectly good set of legs, and opted to climb back up the hill – especially as Al had done the same coming down.

Now, let’s not under play how steep or tough this walk was by the way. It was pretty gruelling on the old muscles, especially when you throw in the additional variables of heat, and… donkeys.

Picture the scene. You are hot, tired, and ascending a steep staircase up a cliff when you turn a corner and see a herd of donkeys literally running towards you.

Luckily these gentle beasts are kind-hearted and well trained, so will move out of the way before trampling you to death, but the fear still remains palpable. I’m not sure whether it was worse looking up to see their rapid descent, or to have to squeeze past the piles of them further down that were just standing about looking you dead in the eye.

I felt pretty sorry for them actually. Is there any other animal so over-worked by humans?

No matter how exhausting it was, it was difficult to feel hard done to when you reached the top and got to have a freshly squeezed orange juice overlooking… this.

The last time I visited Santorini it was in the dead of summer – at peak tourist time. However, it felt like there was a lot more visitors this time. At some points there was so many that it almost seemed to spoil the magic of the place a bit.

Restaurants would default to speaking in English to everybody, and weren’t interested if you tried to speak any Greek. On top of that, some of them were downright rude. We tried to go into one place in particular, and had the most bizarre experience when the waiter went off on some rant about how we had looked at his menu the previous day, but decided to go elsewhere. Apparently this was unforgivable, and he became quite aggressive.

That said, I’m not surprised that people get fed up visitors, when their homes get over-run by tour busses full of gawping, obnoxious idiots that pile off of cruise ships. I more than empathise. When a beautiful place becomes simply a place to go see, like a museum, then it loses what makes it special in the first place. Treating everybody with contempt as a result though, particularly when you run a business that relies on their income is a crap state of affairs to be in. 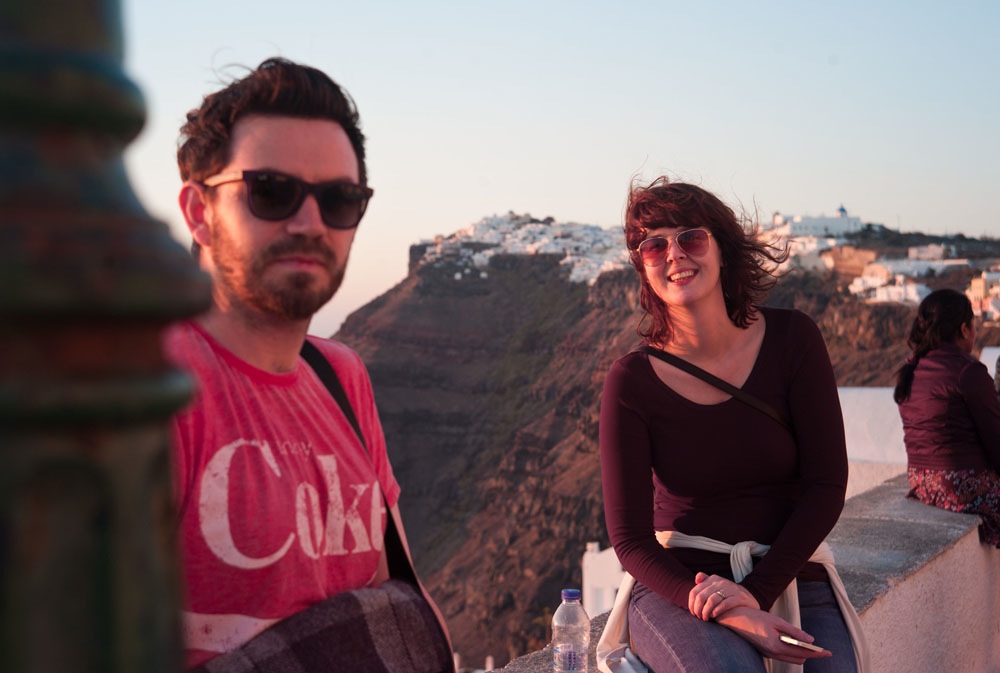 There seemed to be a huge number of Asians when we were there, perhaps because of the time of year, or the relative strength of their economies. One thing that we saw a lot was couples who had flown in with professional photographers to get what looked like engagement pictures with the backdrop of the island. Take a look in the bottom left corner of the below picture and you can make out a couple doing just that. 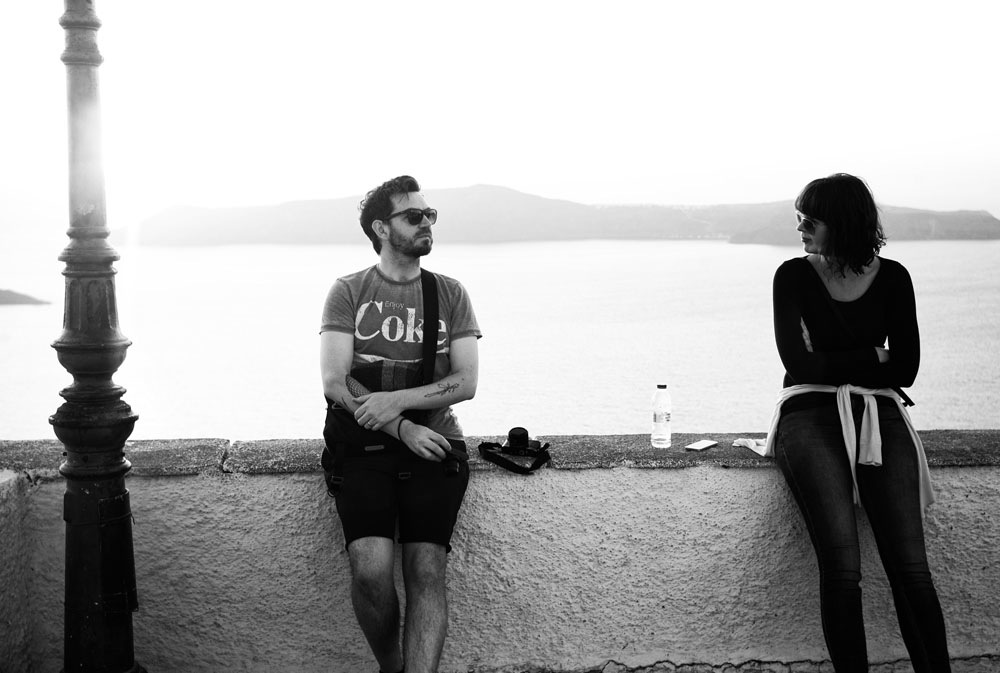 One of the things that Santorini is famous for is its sunsets. Bold, colourful, and the towns perfectly placed to enjoy the view over the caldera. 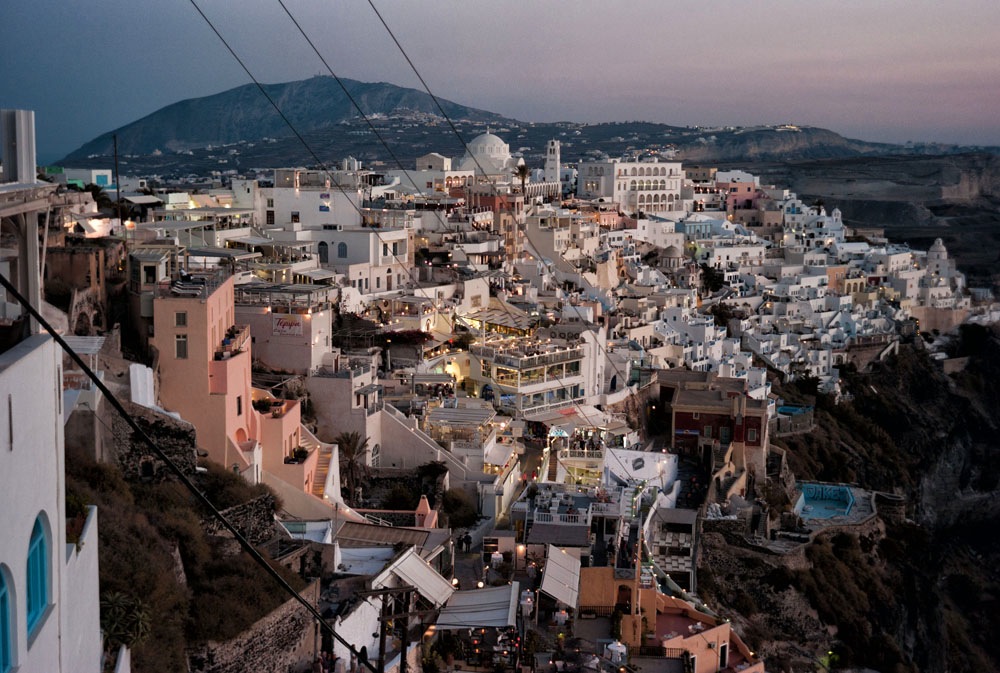 Sunsets are tough to photograph well, so you’ll just have to trust me on this one. 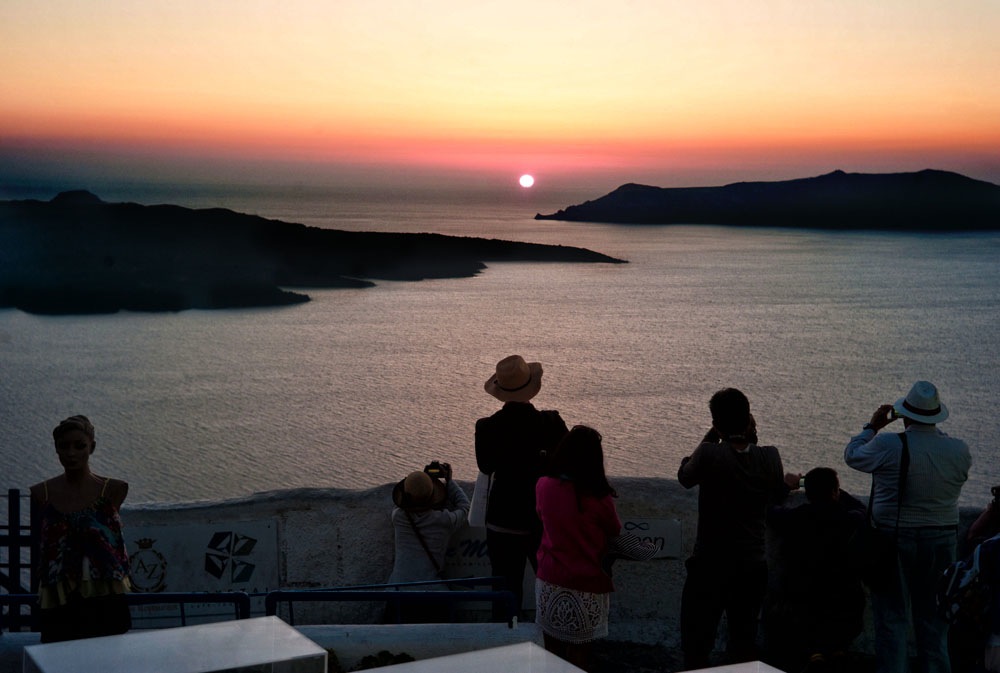 Next we took a day trip up to the town of Oia (pronounced EE-ah). This is the place that you probably see in postcards, with the white buildings topped with blue domed roofs. 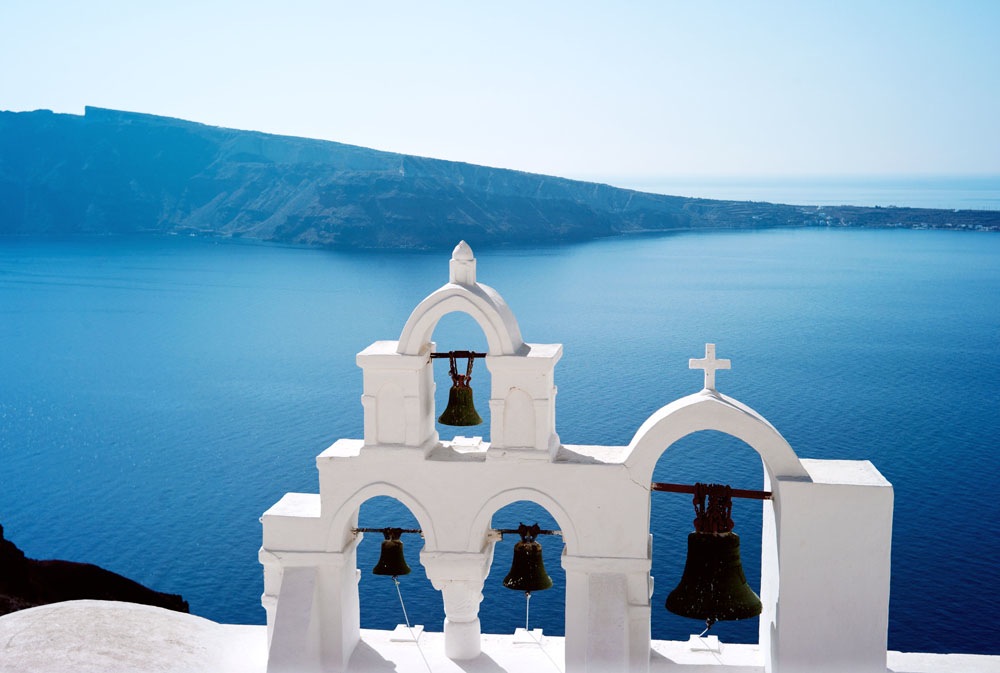 This is somewhere I had never made it to before, and I can tell you: it was just as beautiful as it looks in pictures, if not more so.

Smaller, with even tinier warrens of paths (you couldn’t call them streets) between immaculate houses, and far fewer tourists swarming all over them, the place was gorgeous. 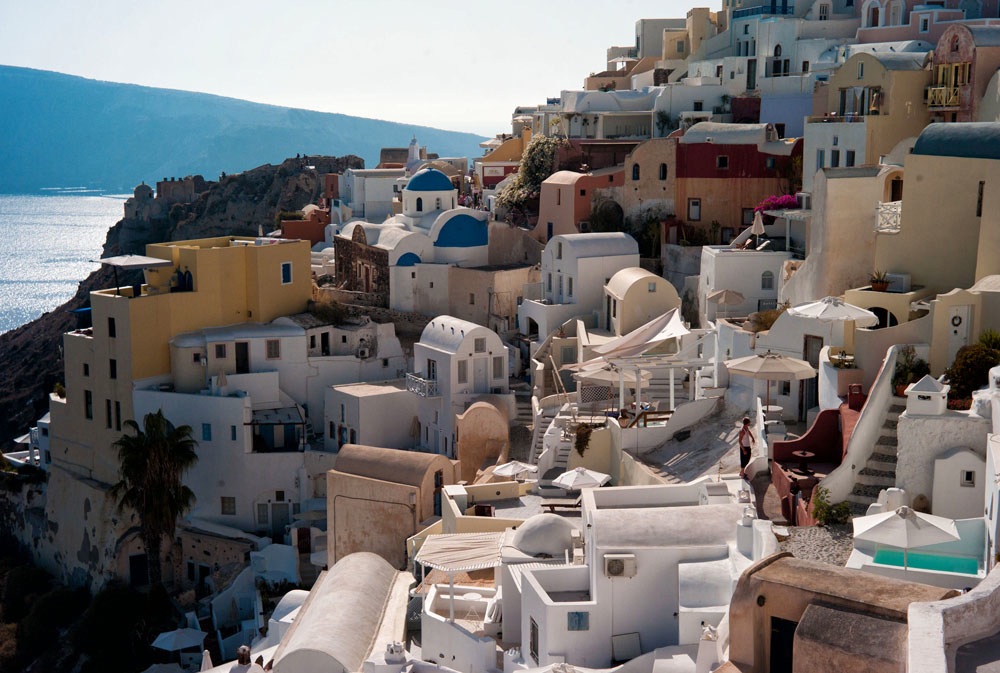 The view from Oia was even more impressive than from Fira… with the patterns in the water below incredibly detailed and inviting on a hot day.

Sadly, we saw plenty of completely F&*%$£ idiots here as well, climbing onto the tops of people’s houses, or the roofs of the churches to take pictures.

It’s sad that in such an amazing place, people have to put up big notices like this on the top of their home:

It’s a hard place to take in properly. Every time you looked up from what you were doing, you almost had to catch your breath again as you forgot just how incredible it was.

The sunsets in Oia are meant to be some of the best around, and people lined up all across the side of the island to get a glimpse. Again, the visitors weren’t exactly showing themselves in a great light – with an American woman fighting with a group of people after she pushed in front of them to take pictures, and a bunch of Italians climbing over a fence and ontop of somebody’s roof.

We headed down a bit to get away from the throngs of people, and found a nice quiet spot on a wall. 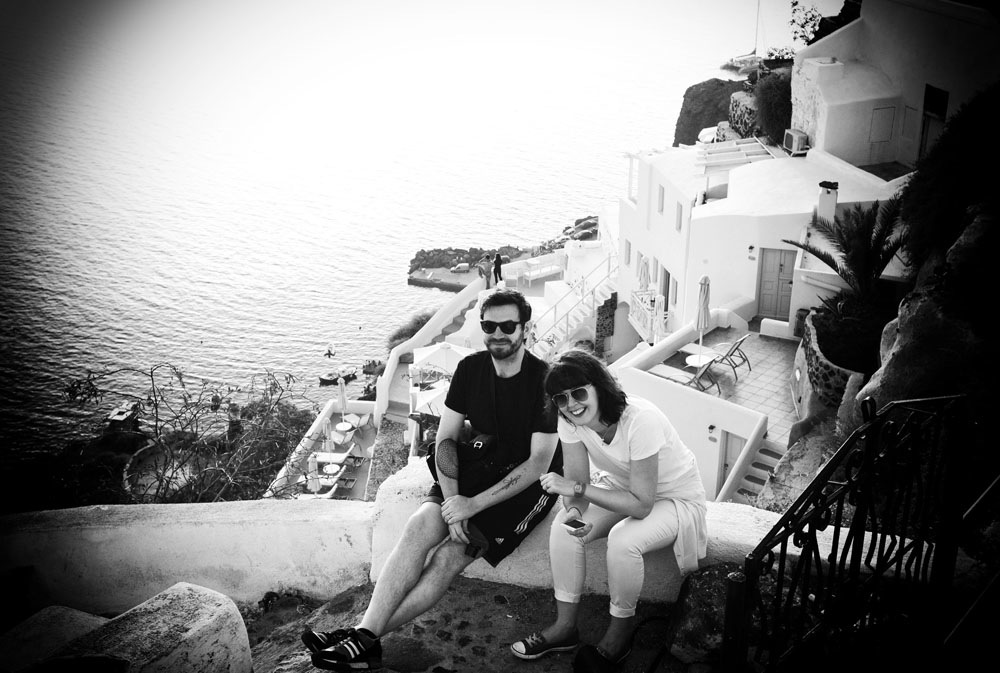 The saving grace of Santorini is that no matter how many idiots there are around, the spectacular beauty of the place is over-powering. It’s hard to stay too riled up when you are bathed in an orange glow, overlooking old ships passing through the volcanic waters.

Whatever the pitfalls of the tourist economy may bring to this place, it’s still one of the most beautiful places in the world. 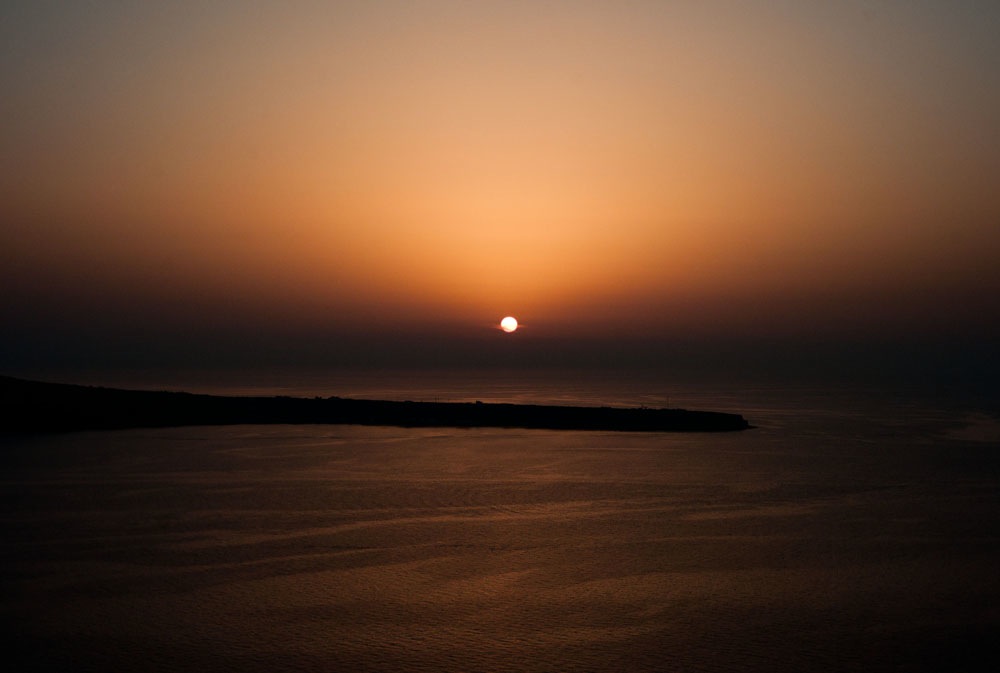