This past week, me and Grace headed to London. I was heading down for a half-day conference on defamation law, and it worked out cheaper to go down for a few days and to stay at my aunts’ because of the way travel worked out. It was initially just meant to be me, but since we have a two-together railcard, we got an extra return ticket for less than £20 extra – so Grace was able to come along, and I took the time off so we could explore.

I’ve done a lot of flying in the past year, and despite all the amazing places you can get to when flying (as well as the benefits from racking up airmiles), I’ll almost always pick going by train over flying. There’s no rushing around like there is in airports, and you don’t feel like you are getting ferried about like cattle in the same way. It’s a much more relaxed, and civilised mode of transport. Don’t you think?

Plus, you get to take pictures of pigeons when you’re waiting on the train to arrive.

Seriously though, the journey from Glasgow to the centre of London is so easy and stress free by train, I think it’s pretty mental to go by plane instead unless you get some crazily cheap deal. Even then, the trip from the airport to town often negates that… and you can’t take decent liquids onboard either! 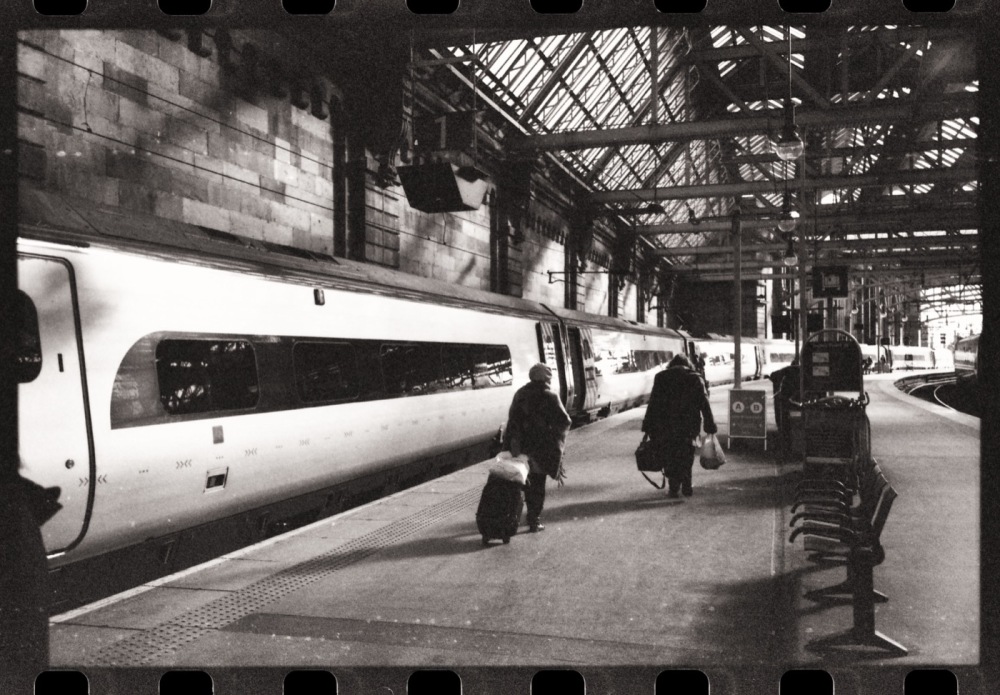 Anyway, enough about that. The one down side, if it can be called that, of going by train into London is how quickly you get thrown into the thick of things. It always strikes me upon arrival just how busy and fast paced the city is. There’s an Iain Rankin book somewhere where Inspector Rebus goes to London, and he talks about how ending up there always feels very much like a small-town boy lost in a whole different world – coming from Scotland; over-awed at the hustle and bustle. That’s kind of what I feel like. Glasgow’s the big city where I come from, and I’m used to it… and London just blows it out of the water.

Luckily that initial sensation doesn’t have to last too long, so long as you find your own groove in amongst the madness. You don’t need to keep up with the other lunatics, or the crush of the crowds. You can be who you want to be; the trick is remembering not to get swept up in it all along the way. Camden might be awful and over-whelming on Saturdays, but then back home I’d avoid the city centre of Glasgow on weekends as well.

One of the cool things about London is all of the history and culture that’s there. Even speaking as a rampant Scottish nationalist, it’s tough not to be impressed by things like the Houses of Parliament, and the rows of flags that were hoisted to mark the State Visit of some Mexican dignitary at the time. 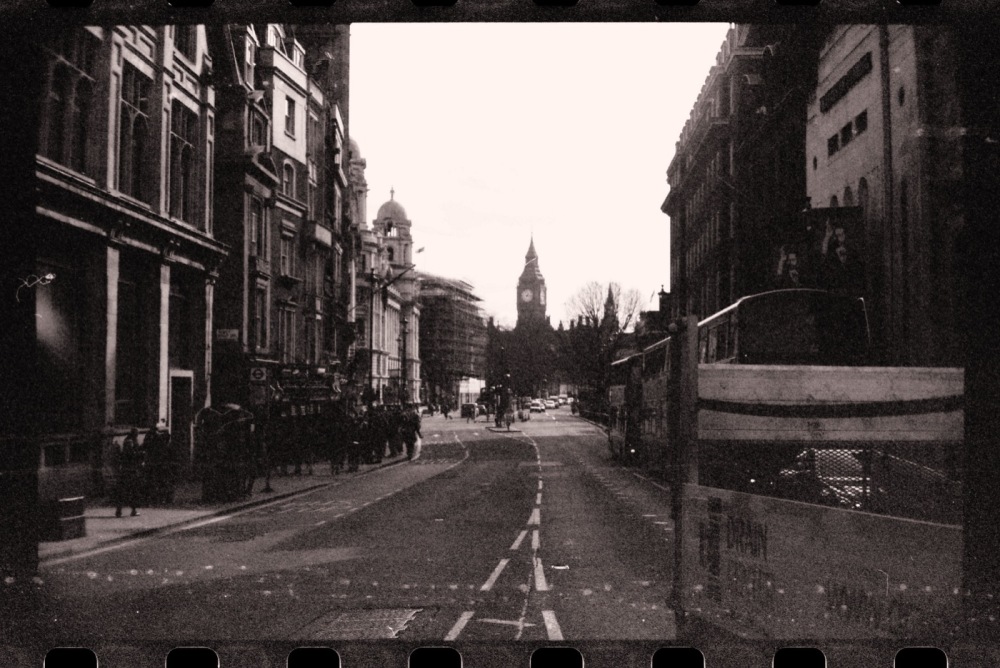 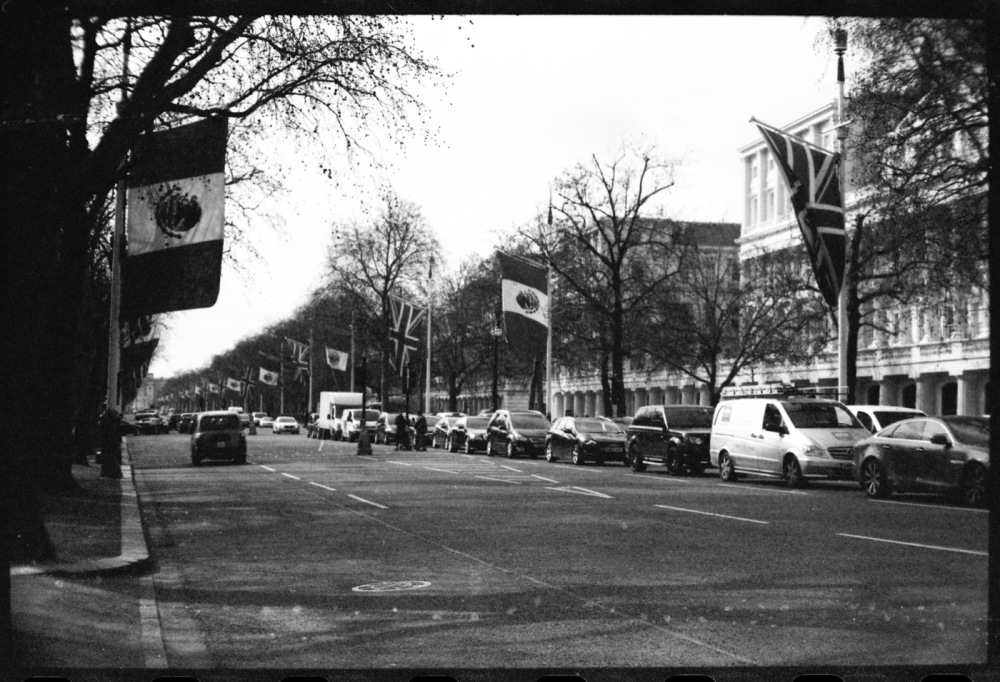 It’s easy to see how the tradition and grandeur of this idea of Britishness can be an alluring prospect – and I’d be lying if I said it wasn’t intoxicating at times. That said, I don’t really believe that outside of this face of London, or wider rural England, that that kind of British identity actually exists. It’s this great myth of Britannia that is confined only to certain parts of society. Not necessarily saying that it is in of itself a bad thing, just that that particular idea of a United Kingdom doesn’t extend as far outside of these kind of places as we often hear spoken about. 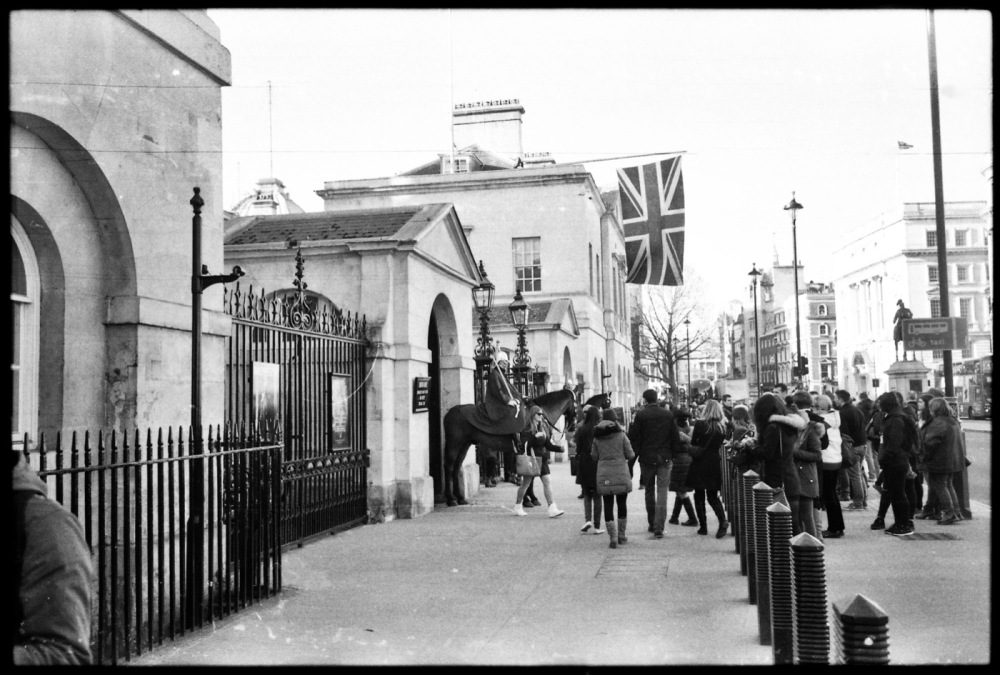 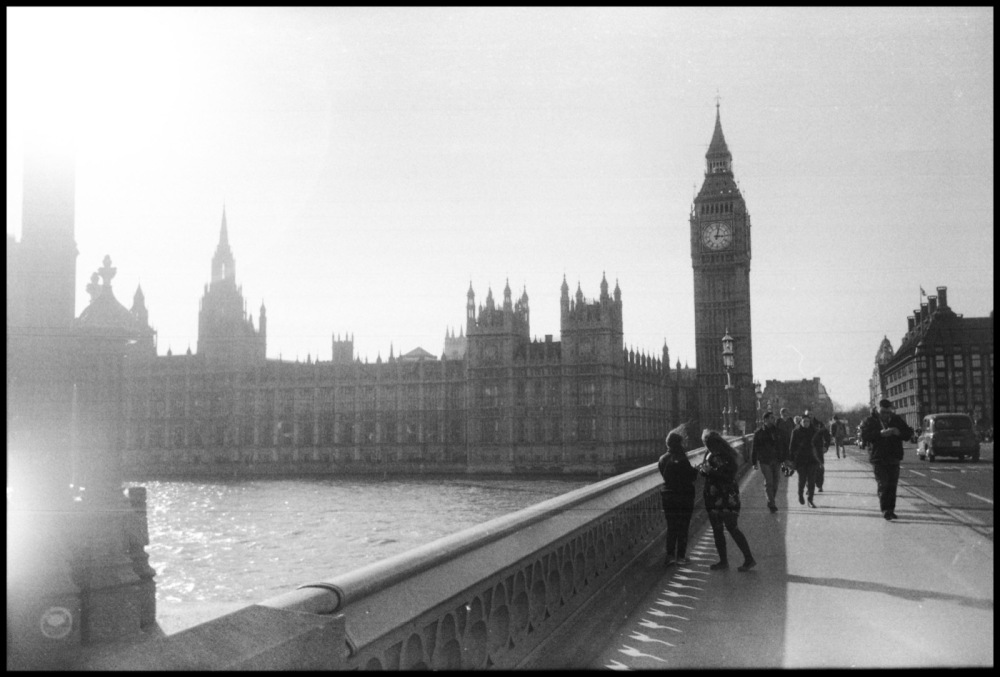 Did you know you can get free guided tours to visit up inside Big Ben? (Yeah, I know that’s really the name of the bell). Well, apparently you can. What’s crazy isn’t that in itself though, or the fact that the slots are booked up for six months in advance… but that you need to be a permanent UK resident to qualify, and you have to register your interest with your local MP in order to arrange a trip. 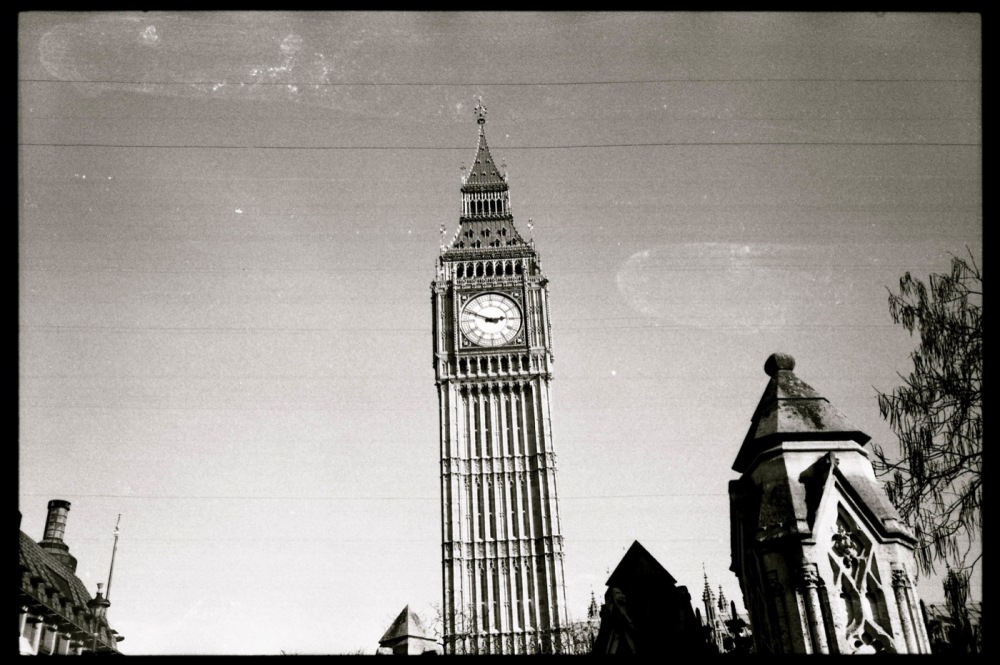 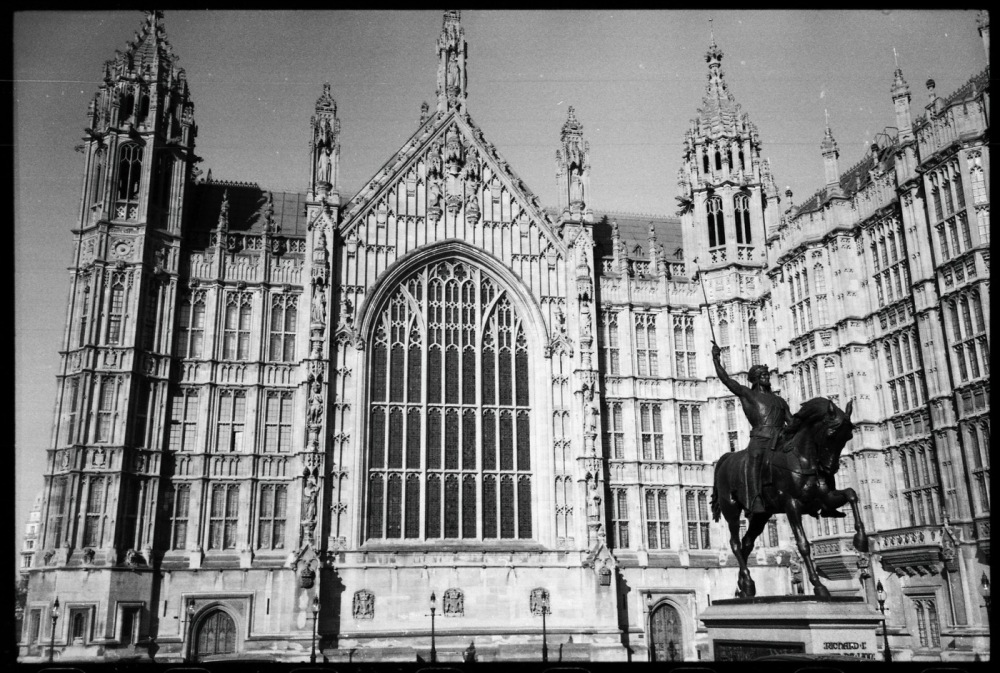 Sociological chat aside, there’s nowhere else like London in the UK. It’s unlike anywhere else I’ve ever visited, though I don’t buy into the self-righteous propaganda from politicos who declare it to be the ‘Best city in the world’. There is plenty about it that is less than great. Give me the generally friendly nature of Glaswegians over the cold indifference of Londoners you come across in the street any day.

Reading that last paragraph back, it seems pretty negative – and it’s not meant to be. I think London is fascinating, and every city has its own problems to deal with… Glasgow more than most. 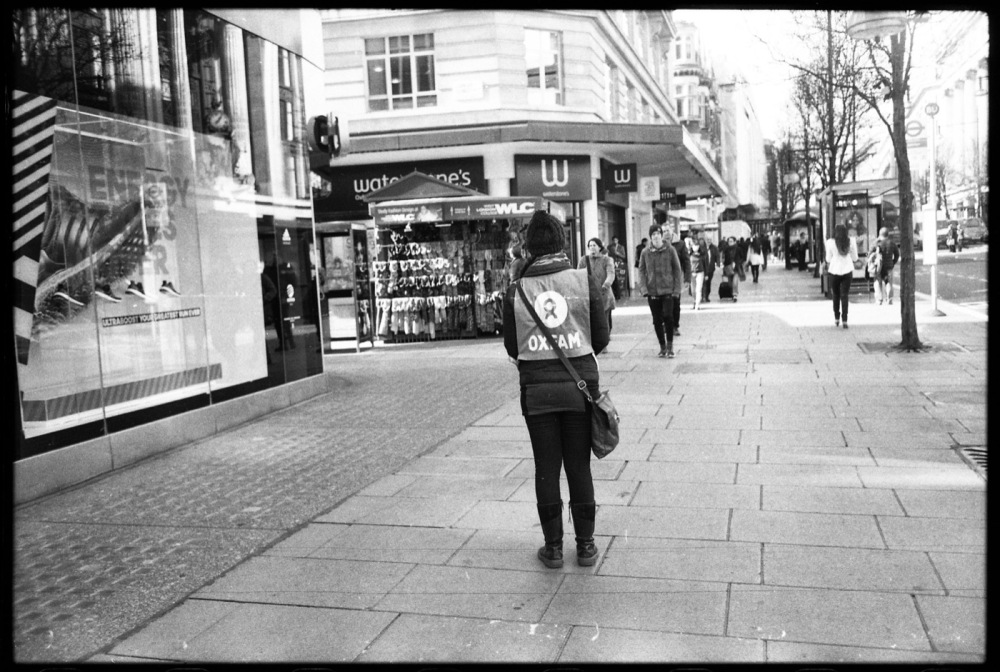 The main thing that I personally find toughest to grapple with is the way in which people interact differently in such a huge city – especially being Glaswegian, where everybody is connected by just one or two hops – at most. It can seem like a cold and lonely place to be at times, without that sort of connection. Just another face in the crowd. 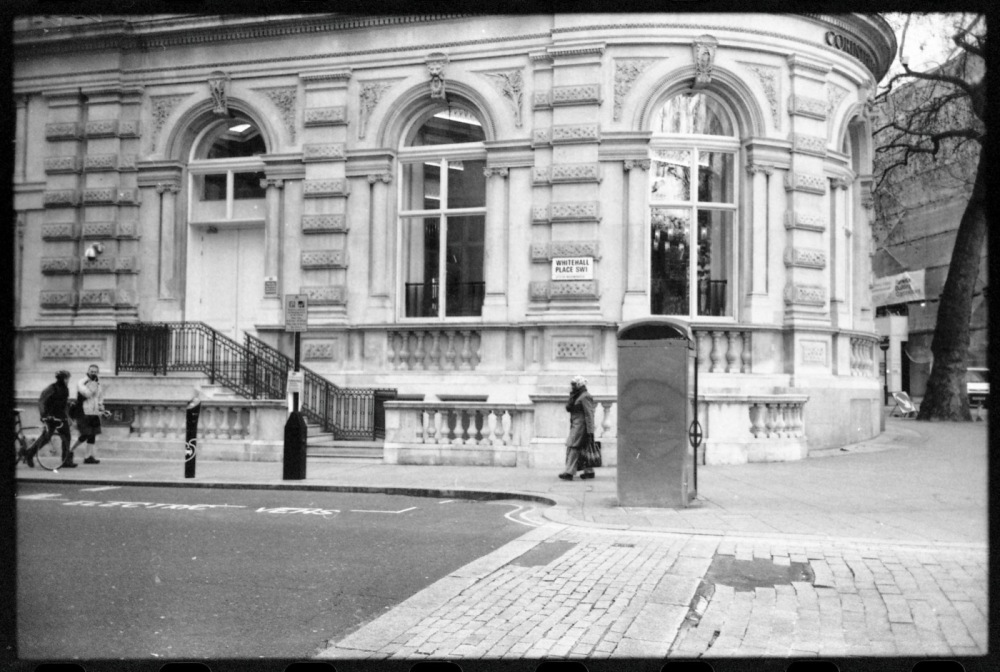 But that is also part of the beauty of this city. As a friend who has lived there for over 50 years said: ‘In London you’re anonymous.’ People don’t really give a toss what you think of them if they are singing loudly to their music as they cycle along the road at night, or if they are dancing whilst waiting at traffic lights – because nobody knows or cares who they are anyway. It’s a strange sort of perspective to get used to, and one which can be either extremely liberating, or devastatingly restrictive – depending on how you feel about it.

For me, I like the massive variety of different and interesting places you can find in a huge city… like a speakeasy cocktail bar hidden inside a fridge in a restaurant, or an independent coffee shop situated in an old public toilet. 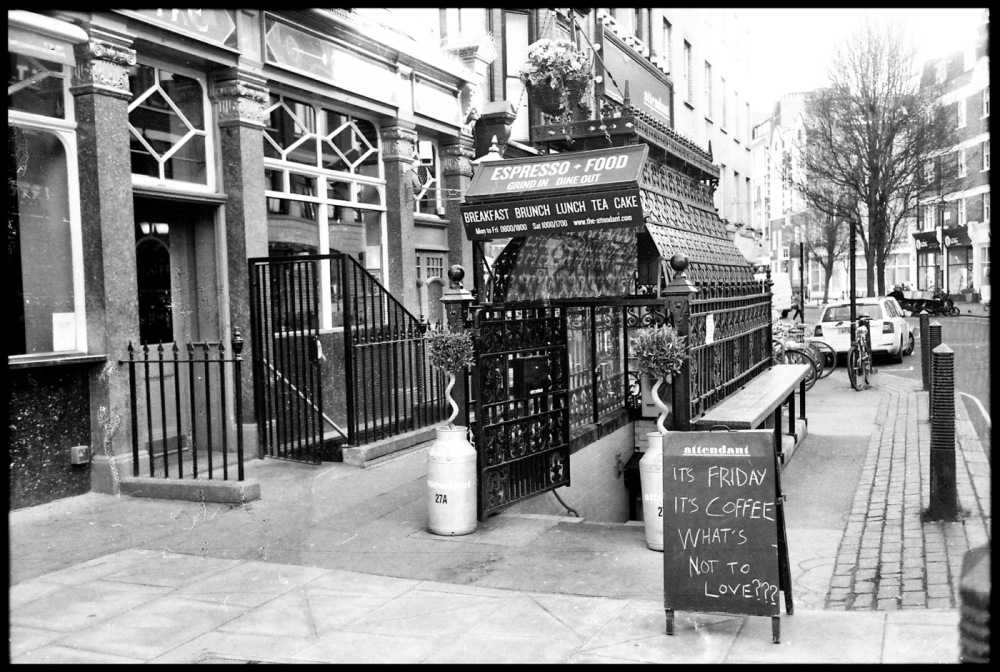 And I really love that there’s always something happening, with a multitude of people constantly milling around. London has a feeling of life to it; it spills out of every street and corner. It can be overwhelming, but is invigorating at the same time. Especially for a photographer that thrives on taking pictures of people. 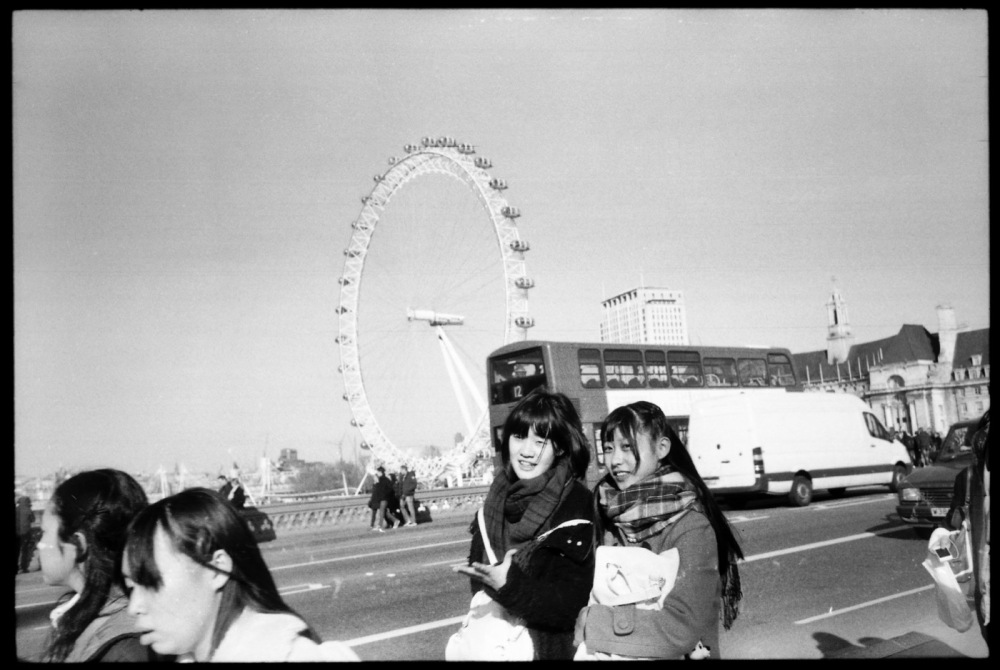 I took my Leica M6 down on the trip, along with the Canon 50mm f0.95, and the Jupiter 12 35mm f2.8. I also had my LC-A, and had planned to take the Sony RX-100 to slip into my pocket, but forgot. In the end, it didn’t really matter – as I used the M6 the whole time, and loved it. It’s such a joy to take pictures with, and I did my best to capture some of what was going on, despite my ongoing fear of candid ‘street photography’ in general. 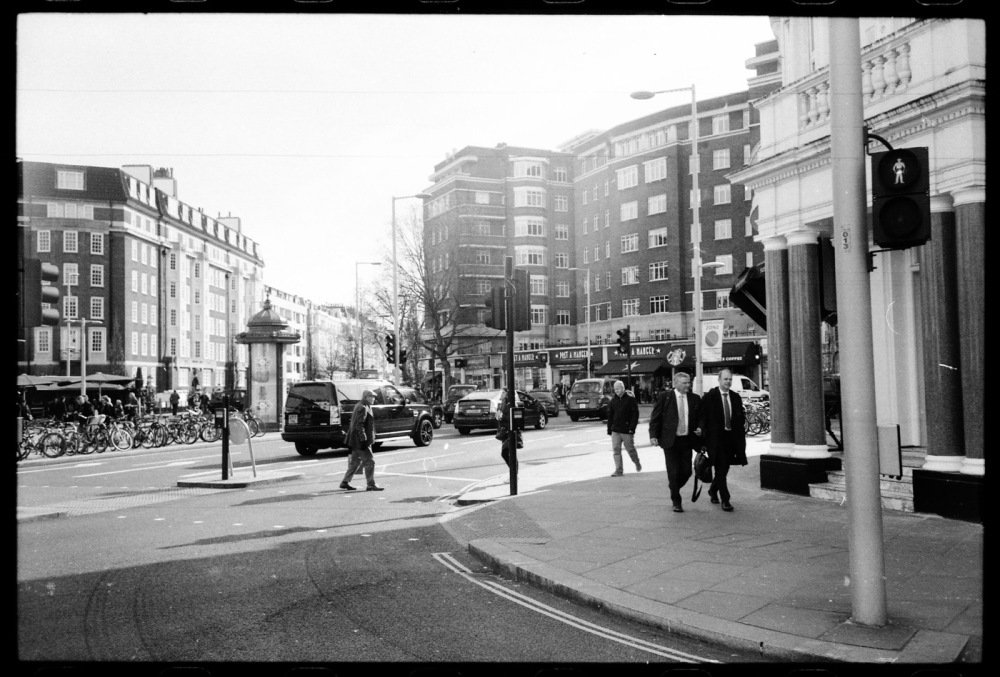 If you can’t get decent street pictures in London, then you probably won’t anywhere. 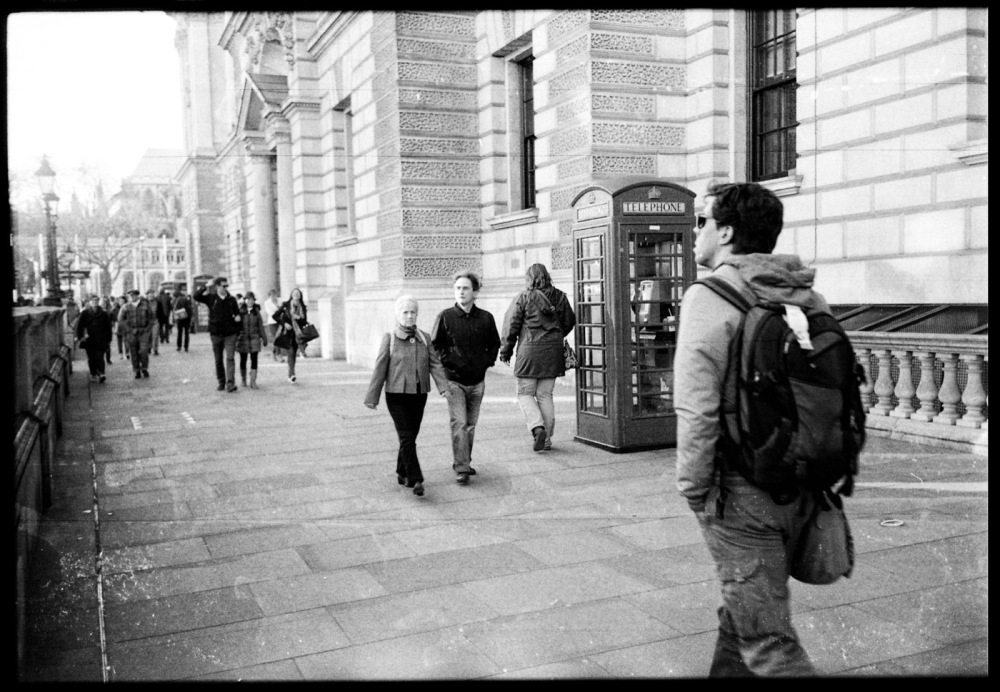 The Jupiter 12 is a great wee lens, and I really like the 35mm focal length… but having gotten used to it on the M8’s cropped body, I found myself not quite getting as close as I really should be to get the best pictures at times. Practice makes perfect…

Shooting on film like this again was another pleasure. It’s been so long since I shot black and white and developed it myself, that I sorely missed it. I bought up a bulk reel of Rollei RPX 400, loaded up a few canisters and shot away. The results are so much better than digital that I almost (but not quite) regret buying a new digital rangefinder rather than just ordering a shedload of film. 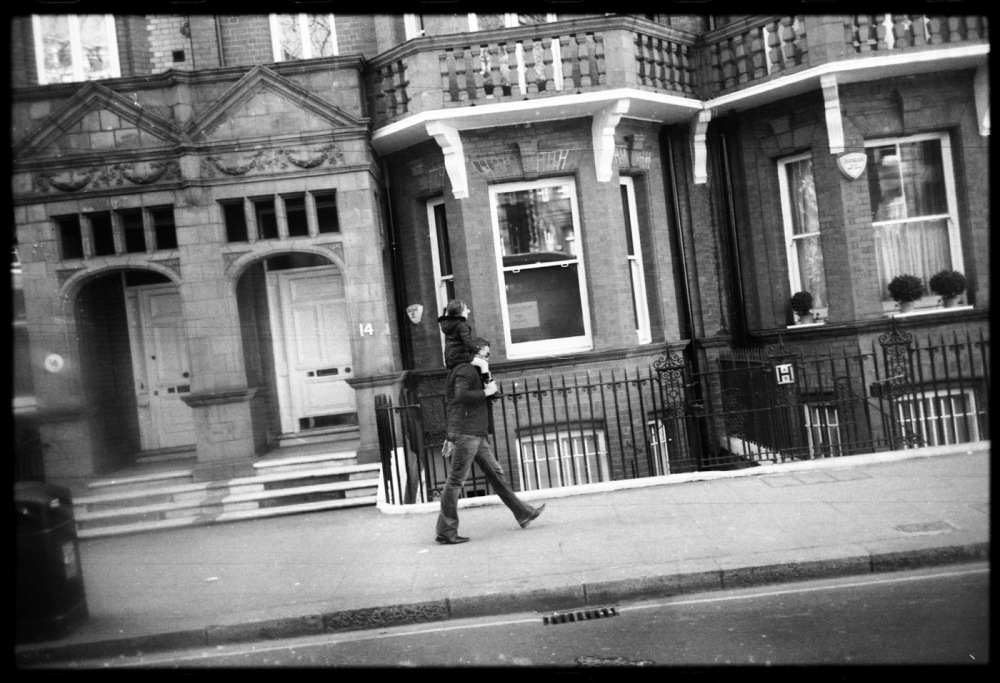 Everything has its place though. There’s a bunch of colour film from the trip that will make an appearance later on at somepoint… but can’t have it polluting my theme here!

Now I just need to get some balls (and get over the mental hump) to shoot my own city like I do other places. Not sure it’s something I’ll manage anytime soon, but I’m damn well going to try.

I love the look of the buildings down here. Shame they easily cost millions of pounds. 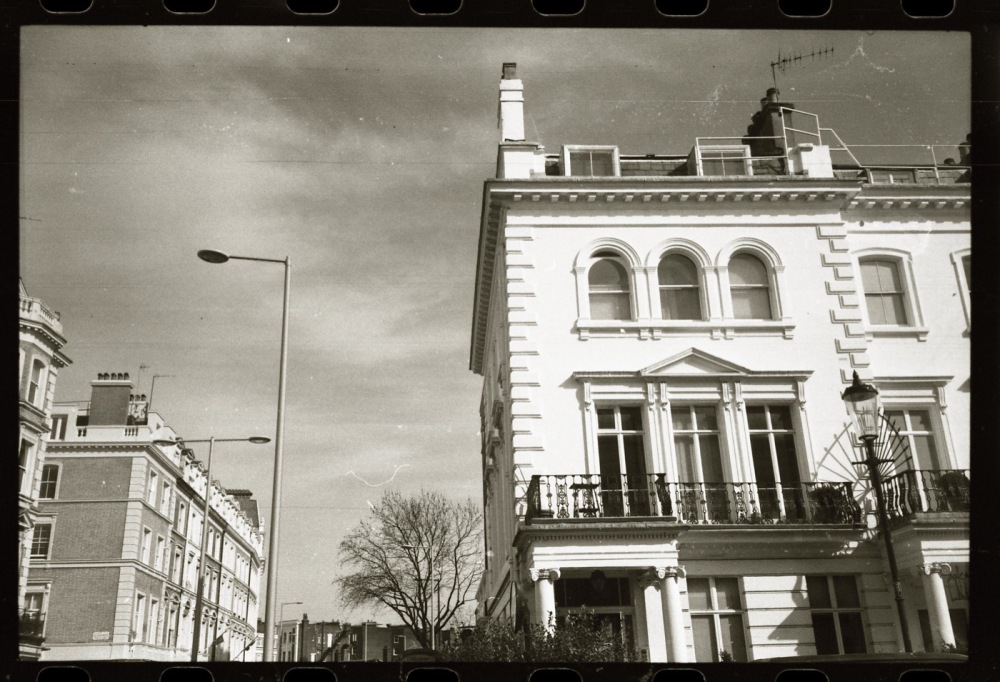 We walked until our feet were sore, and couldn’t take it any more – taking in the sights. Many of them we had already seen when Grace visited Scotland a couple of years ago – before I proposed and she moved over here. So being back together and not worrying about her having to leave dulled the pain a bit. 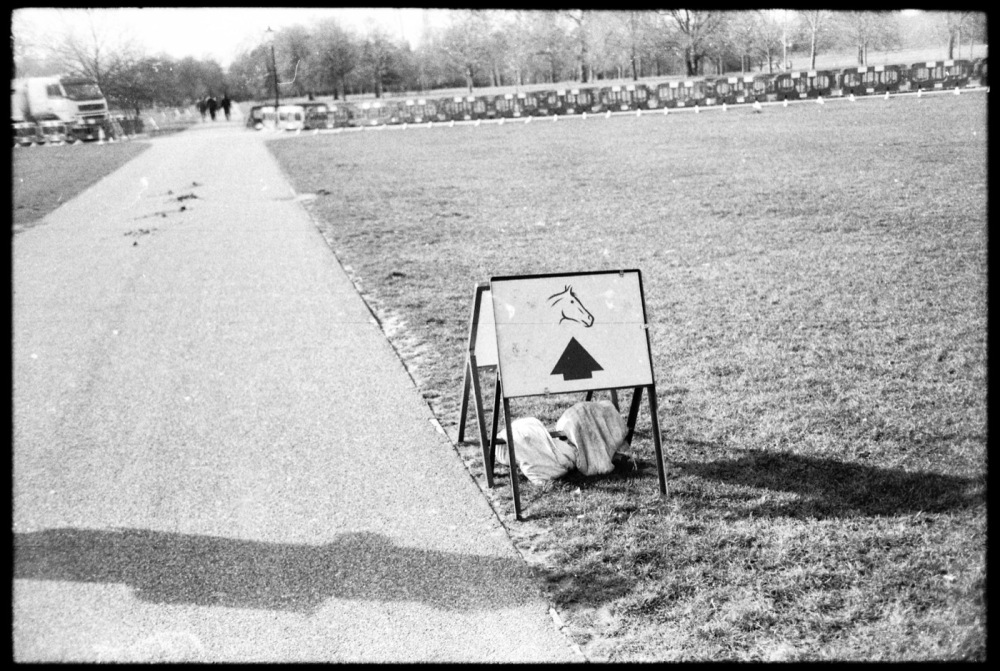 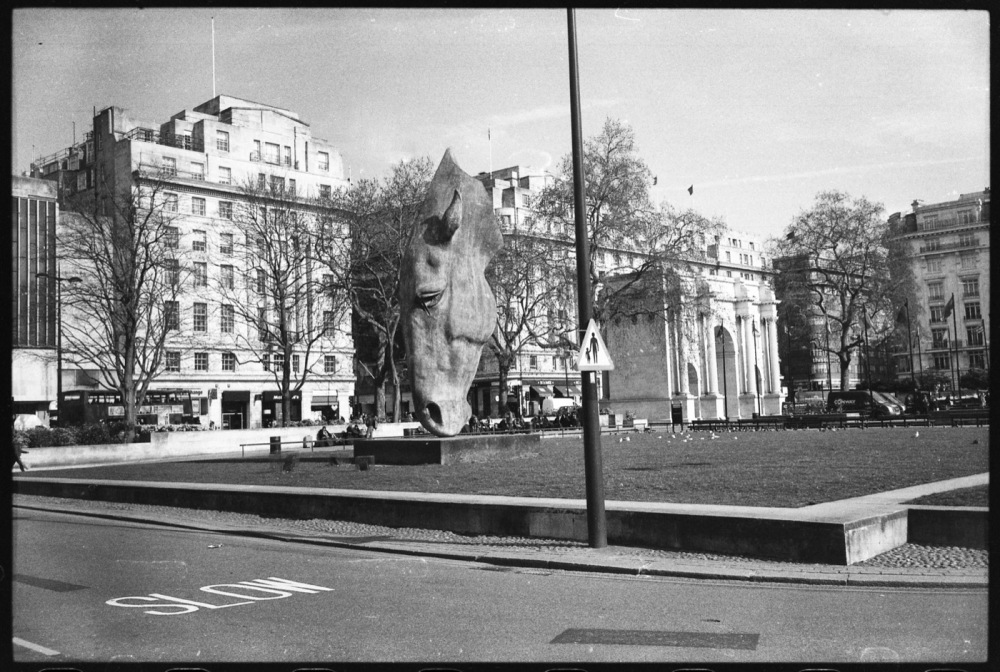 We walked through Hyde Park, which is massive. 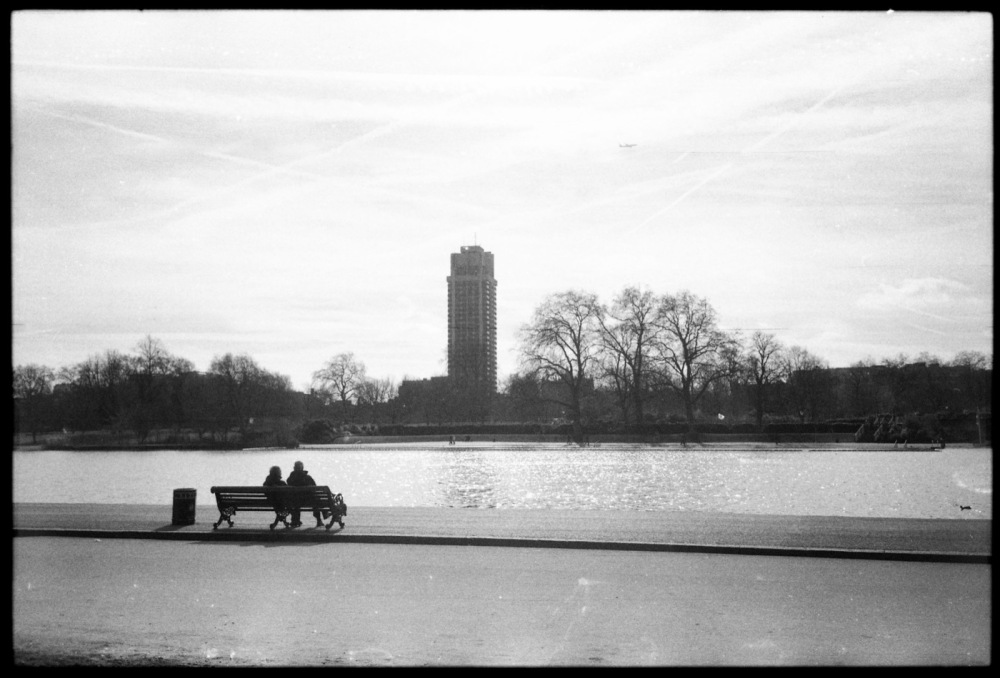 See if you can spot the workman relaxing… 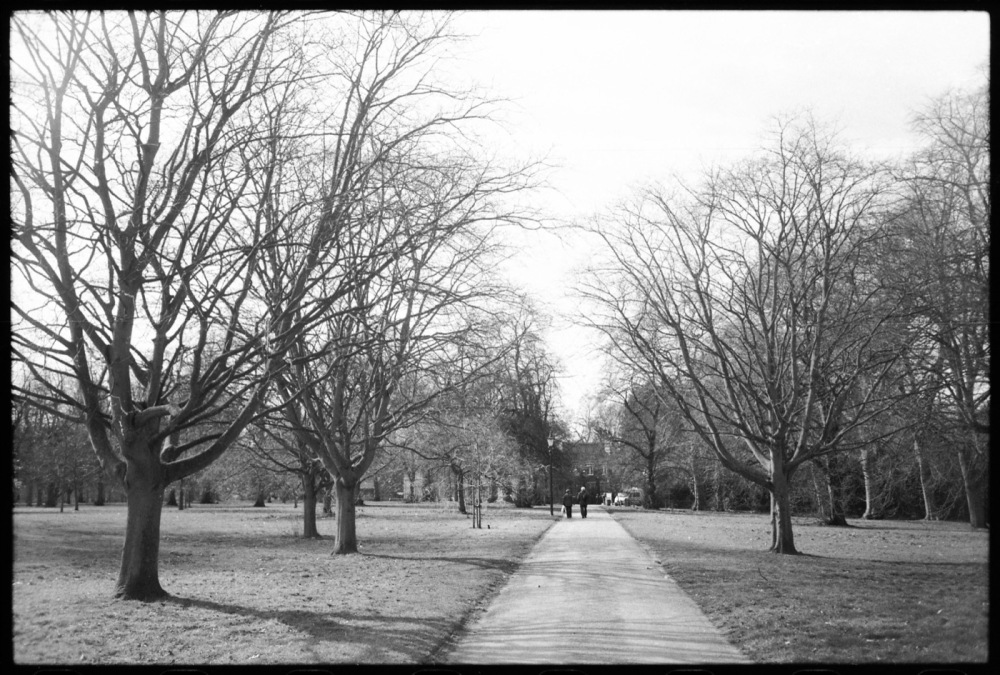 We did make a passing stop in the Science Museum, as it was free. The over-abundance of school kids, hunger pangs, and lack of any weirdo optical illusion type exhibits meant we didn’t stay too long though. We both felt a bit like philistines, but only for a little bit – until we reached an Italian place in Chelsea that did lunch for a total cost of £22, and had a whole selection of different gluten free pastas to choose from.

For a few reasons, I’m going to be back down in London more than once over the coming month, so it will be interesting to see how my thoughts about it change as time goes on. I’d love to feel more comfortable there, as I do like the vibrancy and diversity a lot. It has a good confidence and energy about it… but I’m still apprehensive that I wouldn’t quite be cut out to handle it. That said, given the type of jobs that me and Grace both may need in the future, it might become more of a serious thing to have to consider.

Cheers for having us, London.