Grace and I took the opportunity to stop off for 4 days in Iceland on the way back to Glasgow from Denver. We’ve been doing as much as we can whilst here, including a trip to the famous Blue Lagoon.

(click through for a bigger version of the panorama)

The lagoon is apparently one of the 25 Wonders of the World, but despite that – it isn’t actually really a natural phenomenon – something that people often assume (including myself). The water occurs naturally, but the pools do not; the site was constructed deliberately next to a geothermal power plant, which generates electricity from the heat. As a result, it is situated in a bit of a strange place. You can see the steam rising from the industrial buildings from the distance as you drive up. 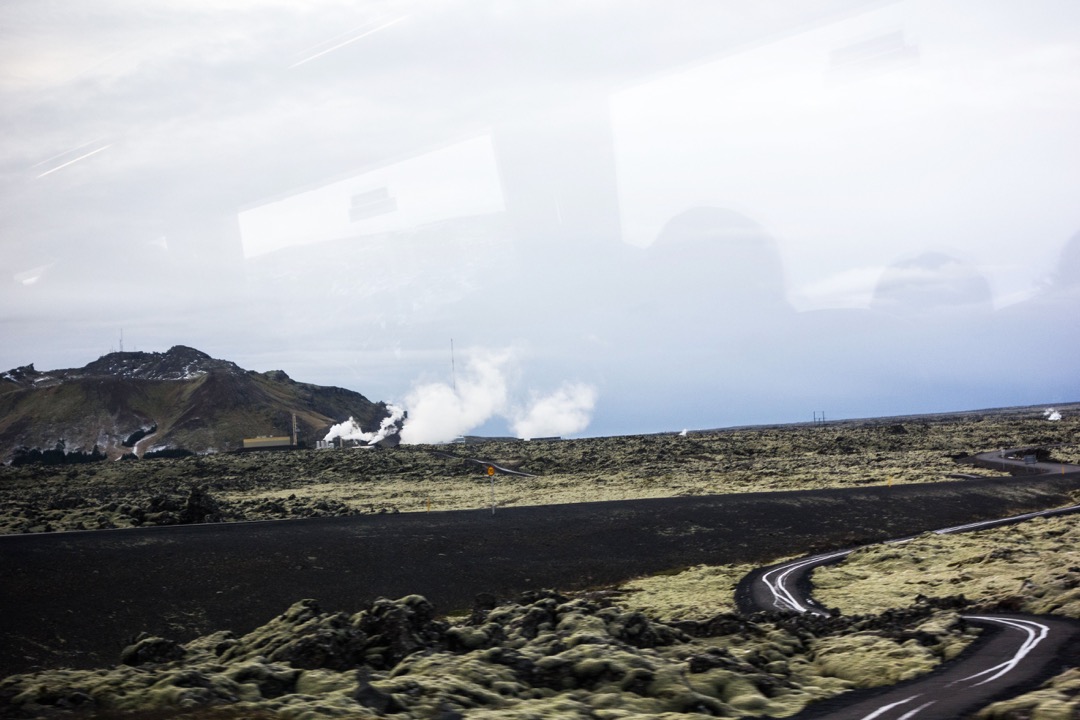 The landscape is pretty wild around about, with moss covered lava fields stretching for miles towards the mountains. When you arrive, you walk through lava on both sides – which is undeniably cool. 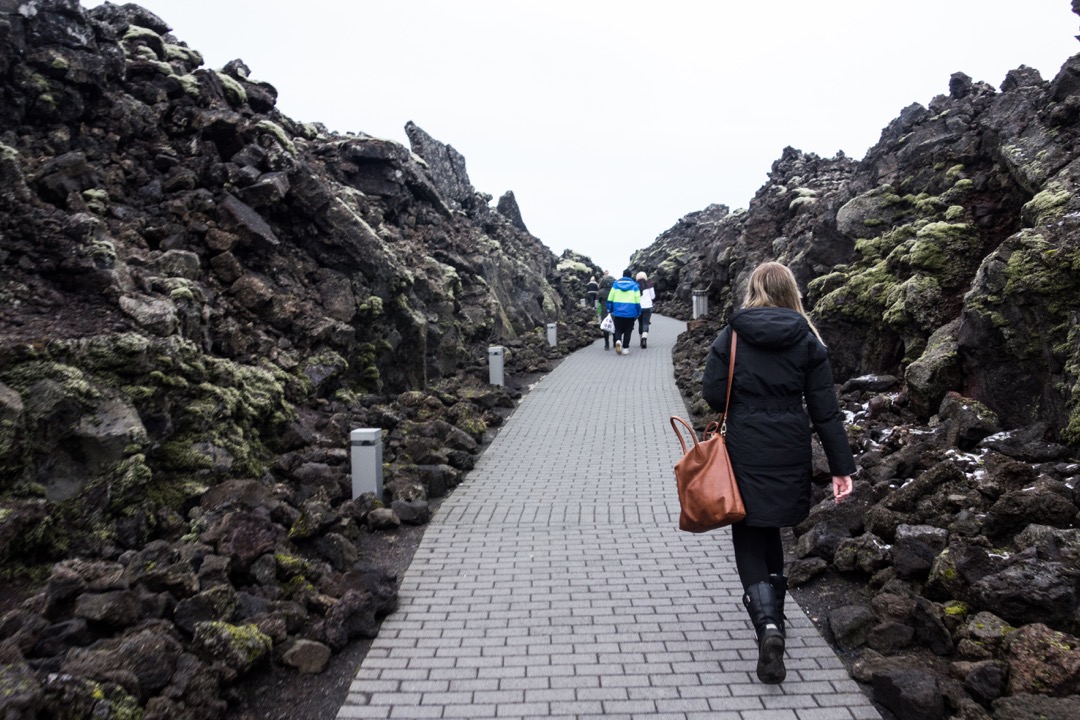 Something that isn’t immediately clear before arriving is that you are required to shower naked before getting into the pool. This is apparently common in Iceland, but wasn’t exactly a prospect that I relished. The showers all have dividers between them though, so it isn’t all that terrible. It also didn’t seem like it was all that rigidly enforced. If you are really not up for it, you can go into a private cubicle with a door… but be prepared for a wait as there is only one. In times gone past I would have done just that – but I’ve grown less bothered about these things as I’ve grown older.

Once you’ve done that whole dance, it’s time for the worst bit: going from the changing rooms into the water in your swimming costume. I imagine it must be pretty nice in summer, but when it’s literally freezing outside, it can be a nippy dash across the slippy wooden decking. You can pay extra to hire a robe, but you’ll still need to take it off at the rails a few metres away before you get in anyway.

Once you do get in though, the water is glorious. 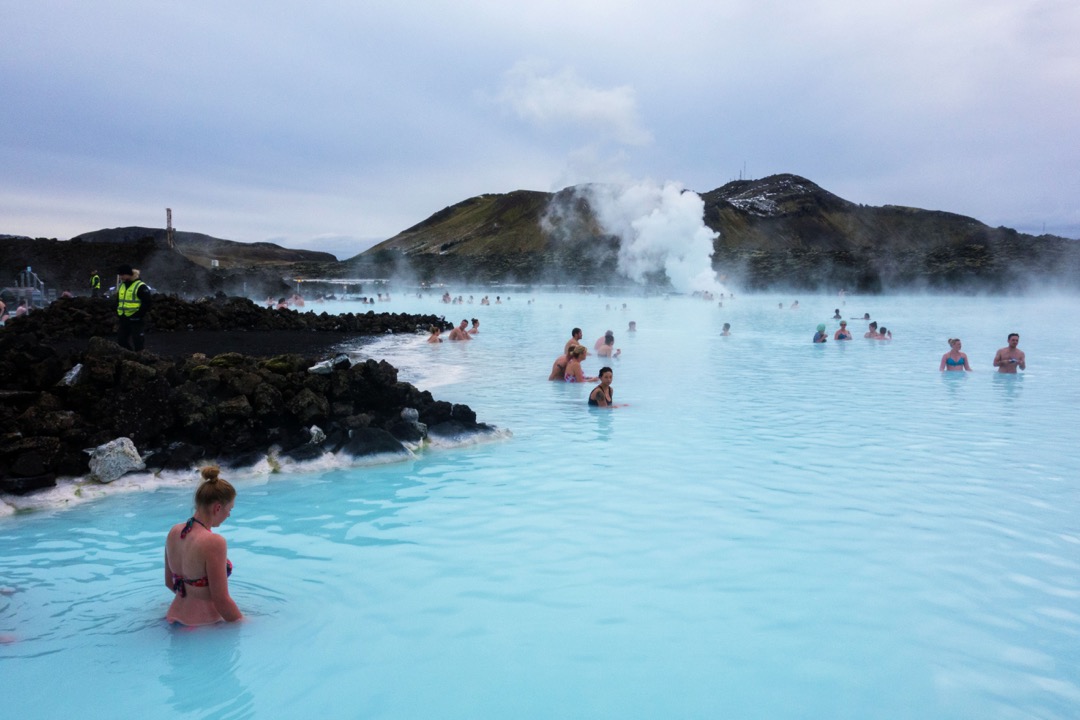 A beautiful milky electric blue, you can’t see below the surface due to its mineral composition. 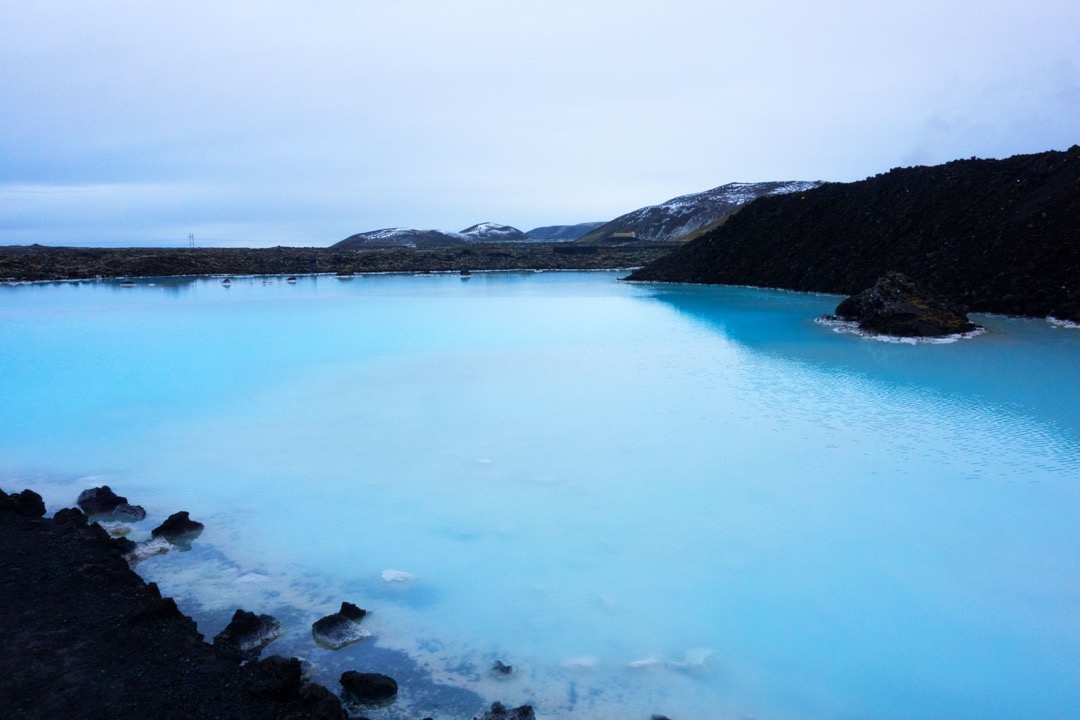 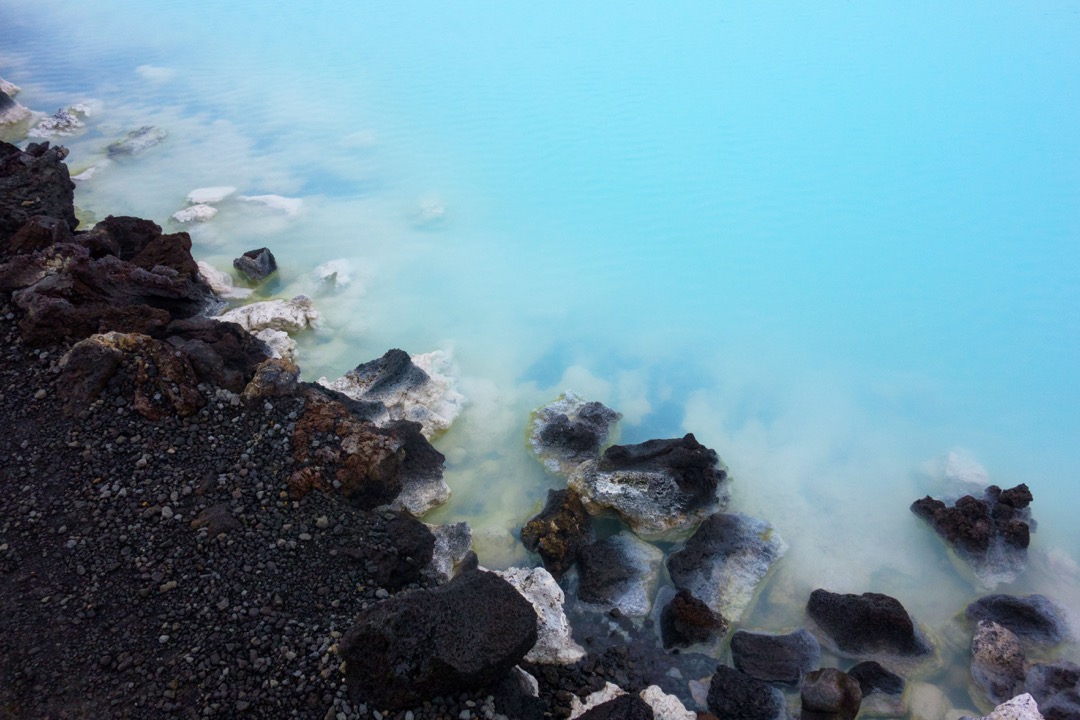 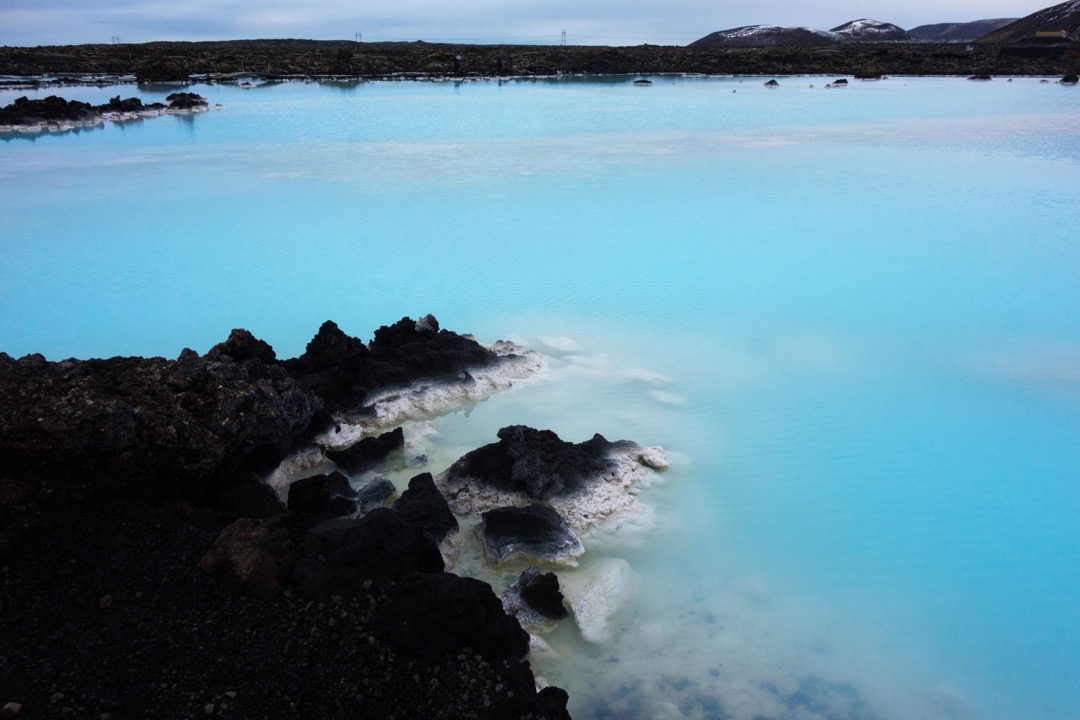 The pool itself is pretty big, and there are plenty of variation in depth and heat, depending on your preference. If you like it hot, get closer to where the water enters… visible below by where the steam is rising up. Not for me. I was getting flashbacks to that film Dante’s Peak where the folk bathing in the hot springs got boiled alive, so stayed clear.

There were places to get silica mud that is allegedly good for your skin, to use as a face mask… and some over-priced drinks at a pool-side bar if you fancied paying the prices. Everything was charged back to an electronic wristband which you settled up before leaving, which was pretty smart.

I’d read online that there was a strong sulphur smell that clung to your skin. That turned out to be a total exaggeration, with a faint scent detectable when you are in the water… but not something that is any different from running the hot tap anywhere in Iceland. Since this stuff heats around 90% of the buildings here and keeps the pavements mostly free from snow, it seems like a small trade-off. 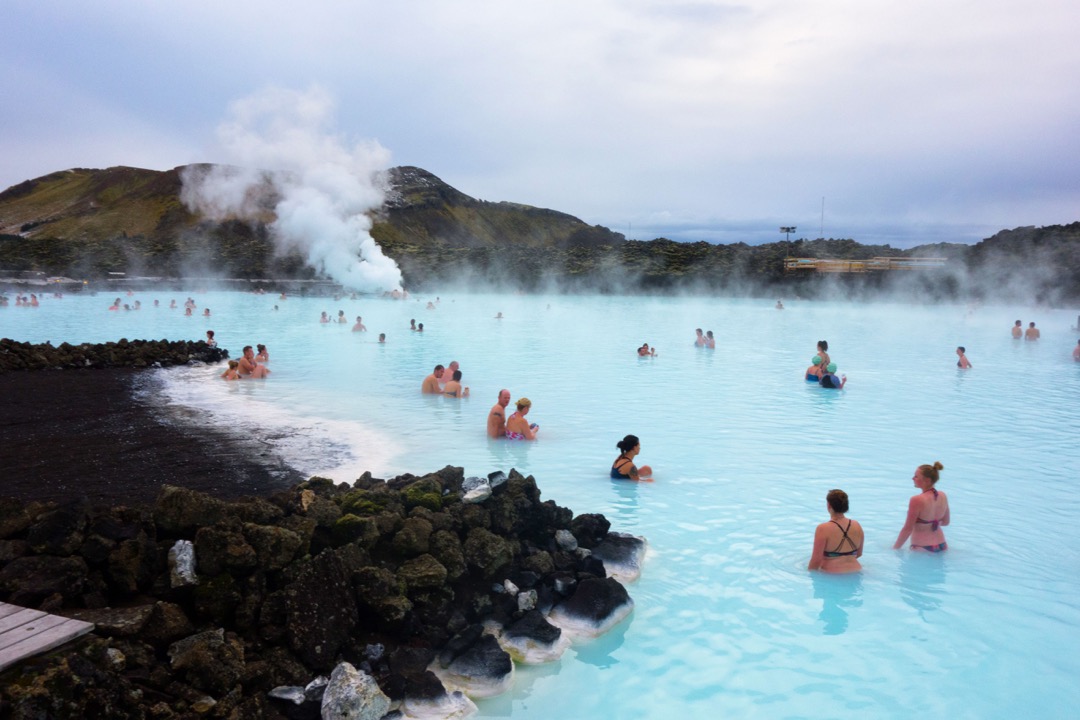 You can pop in and out of the lockers as you want, which means you can grab your camera and take a walk around before sticking it back in and carrying on swimming. I wish I had the underwater case for my Lomo LC-A here, as the steam rising up looked so cool. We did see a couple of people with their SLRs held above their head in the water to try and capture it, which just seemed like total madness. No chance I was trying that out. 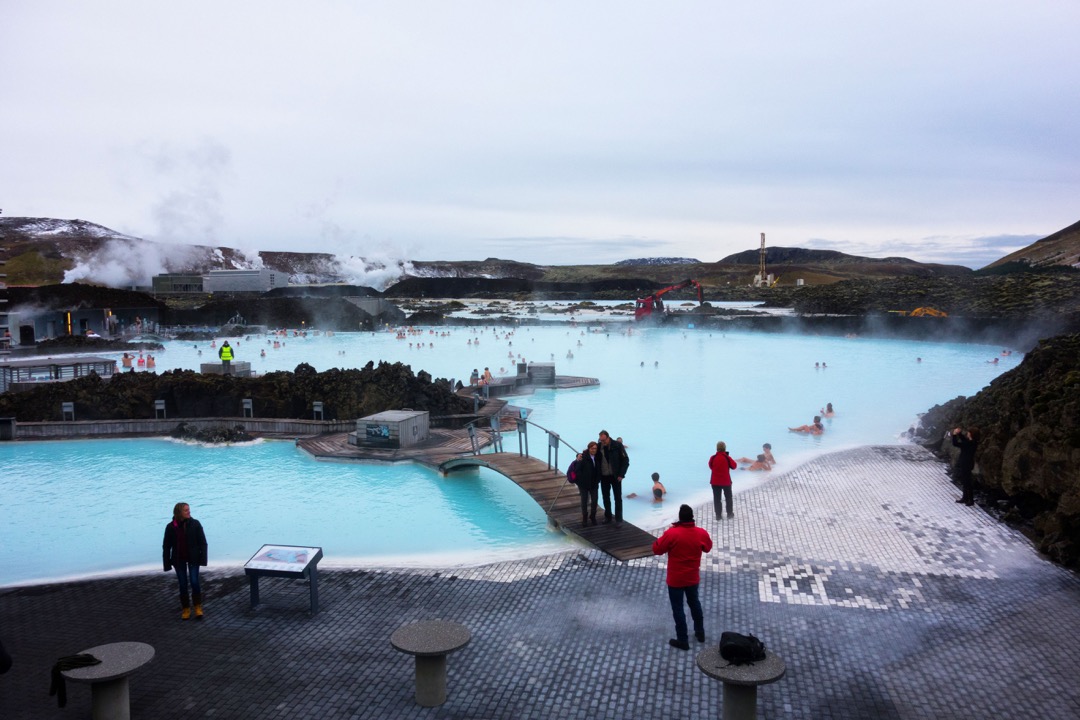 There is no doubt that this place is aimed at tourists, and it would be silly to think otherwise. It is expensive, working in at around 45 Euros each for the most basic package, and the more expensive packages cost a lot more without offering much in the way of added value.

That said, whilst I wouldn’t go back (unless somebody else paid), it’s definitely an experience worth having, and I’m glad we went.