The Northern Lights (or Aurora Borealis depending how fancy you feel) are a natural phenomenon. The pictures look surreal, and getting to witness them surely must be on everybody’s bucket list at some point.

Iceland is one of the most well known places to see them, its latitude exposing the country to their effects all year round (though obviously they are only visible in the darker months). It’s also one of the easier places to get to for many people, as opposed to trekking to the upper tips of Norway.

When we booked the trip, there was little doubt that we would try our luck at seeing the lights, irrespective of what else happened. My colleague Lisa lives far north in Canada, where she is fortunate enough to regularly get a great view of them, and her enthusiasm really sealed the deal.

We headed out on the Tuesday evening at 9pm, on a bus that we had pre-booked for about 30 quid each. To be honest, I wasn’t too hopeful of seeing very much… having had friends who’ve done the same thing and ended up disappointed. It seemed like the odds of having a truly amazing experience are incredibly small.

The reason for this is that seeing the lights are hugely dependent on a variety of different natural factors; something that our guide (Stanun) emphasised from the outset, hammering home how hit or miss the ‘hunt’ was. “It is impossible to predict whether we will see anything. The forecasts change all the time, and you need to have clear skies as well as aurora activity. They might only come out for five minutes, if at all. Do not go out with high expectations. Take the time to enjoy the stars and meditate whatever happens.” Her speech didn’t fill with me with much confidence. I did like her analogy about searching for the lights being like going salmon fishing though… You can set everything up right, with seemingly perfect conditions, but you’ve no idea if they are going to catch anything, or if they are just going to nibble your line.

The bus took us out to a dark spot out past Reykjavik airport, on a peninsula that was previously home to the NATO base that left Iceland back in 2006. It was freezing, the cold winds chilling down through all of the extra layers that we had put on. Craning our necks up, all we saw was the black night’s sky, peppered with stars. 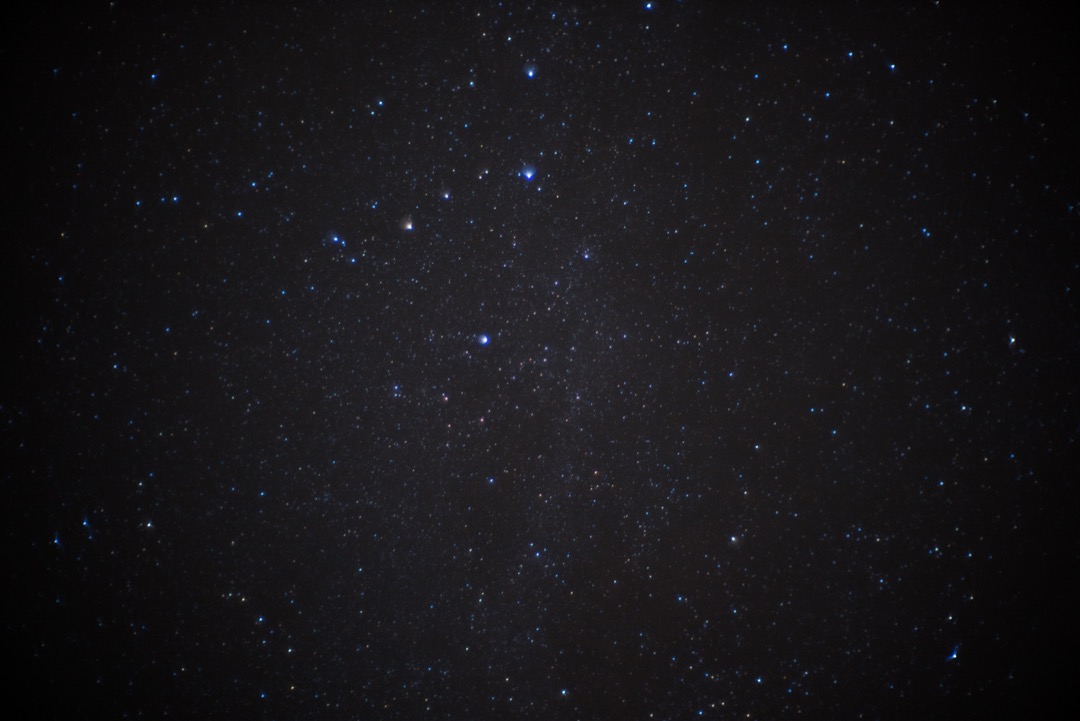 Despite being out for over an hour, we saw nothing except the odd shooting star. Just as we were getting back on the bus to warm up, the guide pointed out a glow in the distance, behind some clouds. There was definitely something visible there, so I tried out a long exposure… 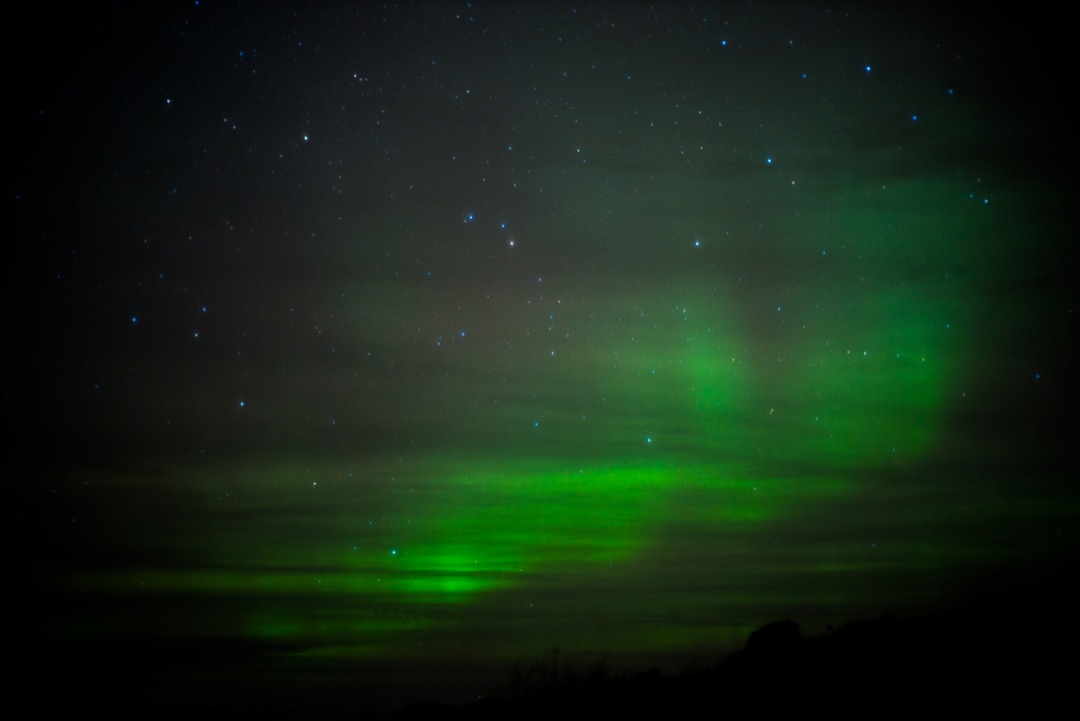 The camera picked up the green colour behind the clouds, but to the naked eye it could have been nothing more than a bright plane passing low overhead. Despite having a good time, it left us feeling pretty dis-heartened. “Was that it?”. The difference between what we could see and what the camera rendered was so great that it seemed like all of the pictures we had seen were just a lie; misleading us into thinking that the Northern Lights were far more amazing than they actually are. 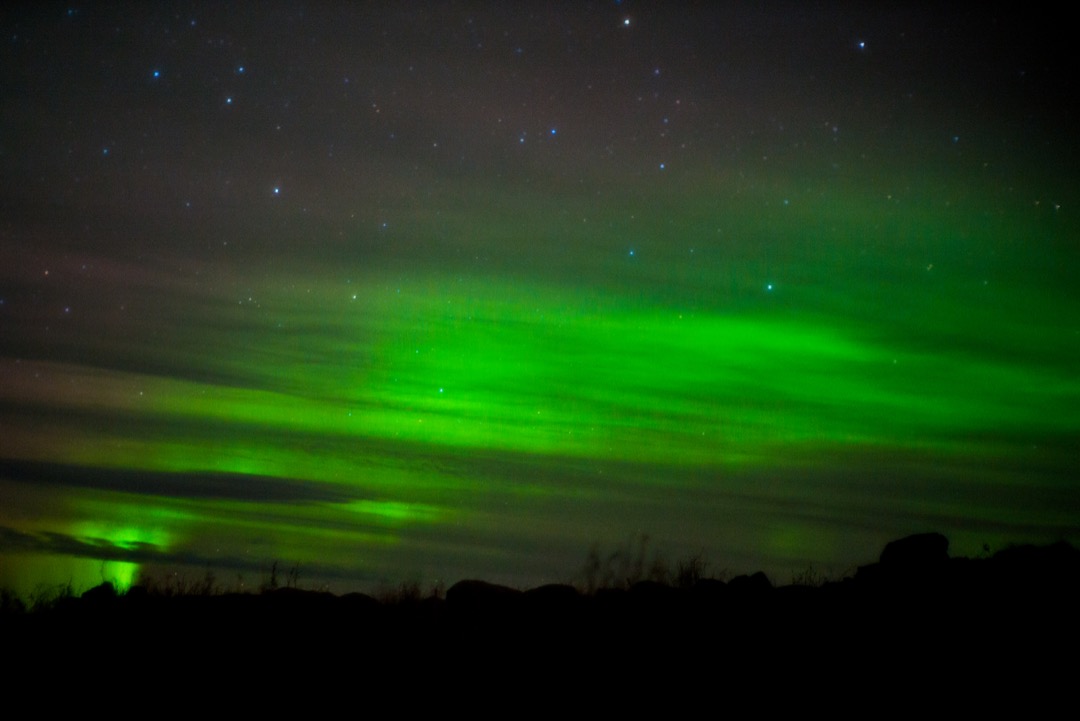 Despite this, the tour company said that since we didn’t get to see very much, that we could go out again the next night for free. I was surprised they did that actually, as we had seen *something*, just that it wasn’t very good. We didn’t have anything planned (partially because the bars were so expensive), so decided we’d take them up on the offer.

The next night, we headed out again at the same time. The sky had been gloriously clear all day, so if we didn’t see anything at this point, the clouds couldn’t be to blame. We got the same tour guide, who ran through the whole expectation setting theatre as she had done before. She was barely halfway through, when somebody pointed out a faint green stripe visible on the skyline out of the right side of the bus. When the guide realised what it was, she seemed taken off guard – we weren’t yet out of the city and here we had a better view than we had gotten all night previously.

As we drove further on, the green intensified until it showed a huge arc across the entire sky – like a huge, galaxy wide rainbow. The guide excitedly told us: “Wow! You are very lucky to see this!”, and announced that we’d be taking a detour so we could all get out of the bus whilst the lights were out. People scrambled off and we gazed upwards. I tried to get some pictures, but they didn’t come out all that great. A rangefinder is really not designed for this sort of thing, and not only did I not have a tripod, but I have very little experience with stuff like this. You could clearly see the green colour coming through though, even with a relatively short exposure – and this time it was much closer to what was visible with the naked eye. 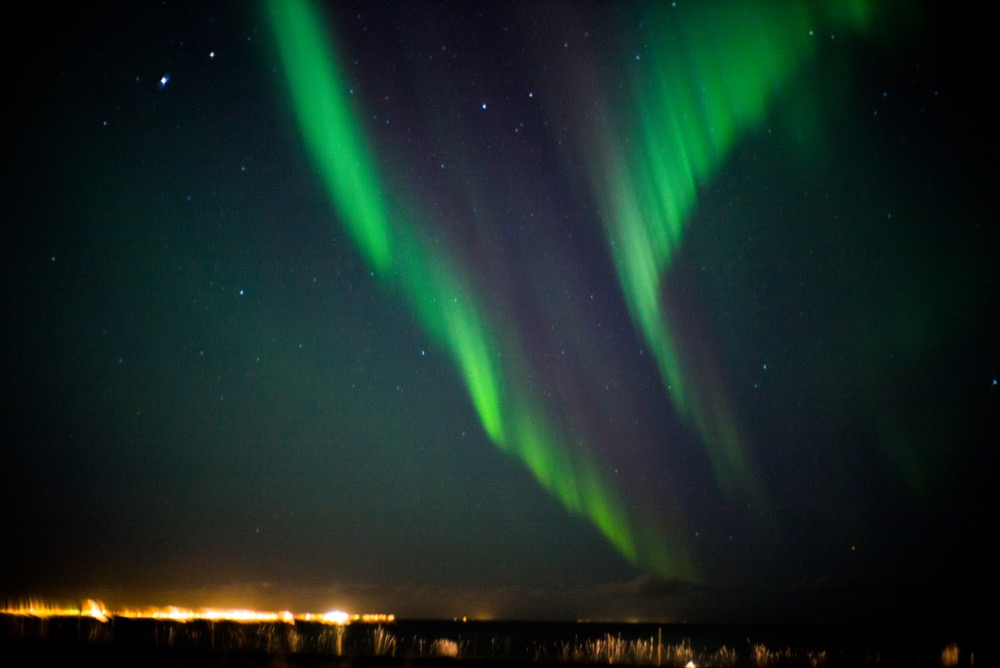 It was pretty amazing, especially after the disappointment of the night before.

After 15 minutes, we got back on the bus and headed on towards the spot that we were originally aiming for – out near a lake, in between some mountains. We were excited to have been able to see what we did, but I also worried that that would be as good as it got all night.

I needn’t have. The further we drove into the darkness, the more we saw the sky dabbed with splashes of green, like a watercolour painting. When we finally got to our destination, there was a patchy green glow clearly visible all above us. 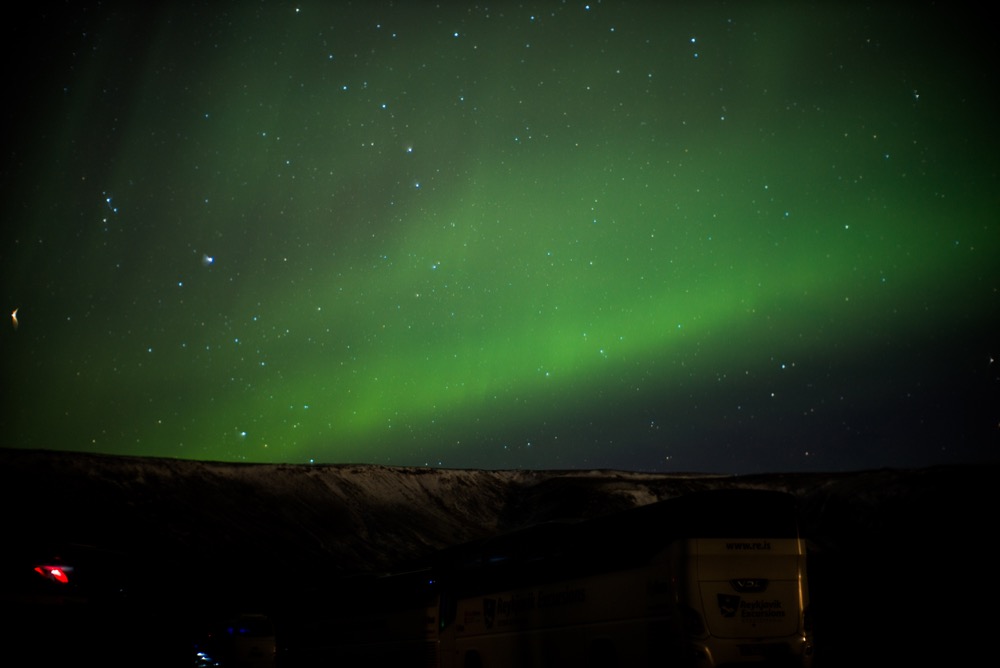 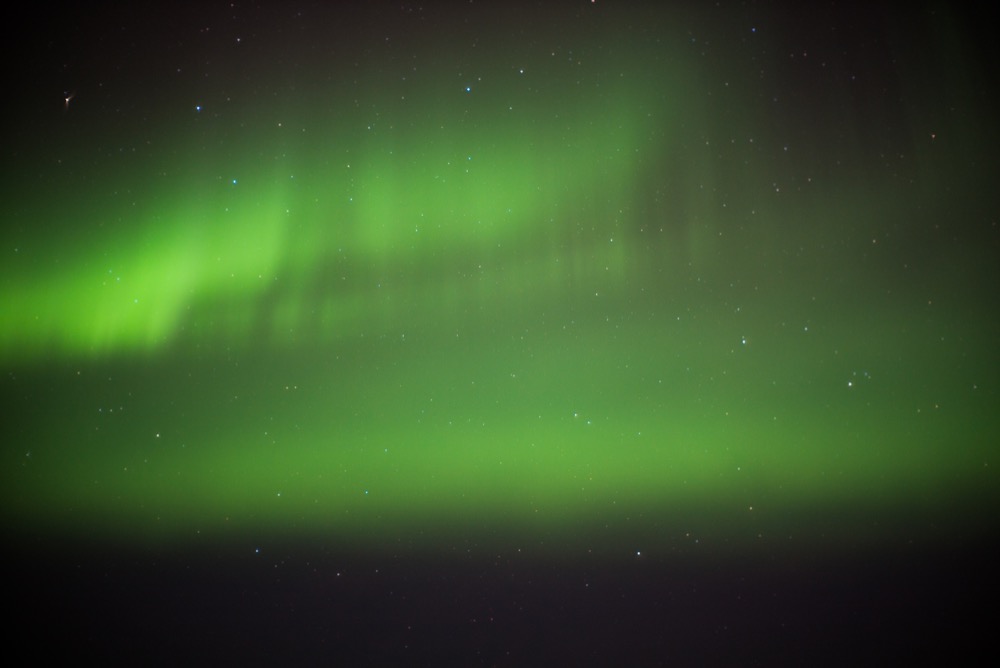 We sat outside for about an hour, balancing our cameras on some rocks in the darkness to try and capture some of the beautiful shades of the sky. 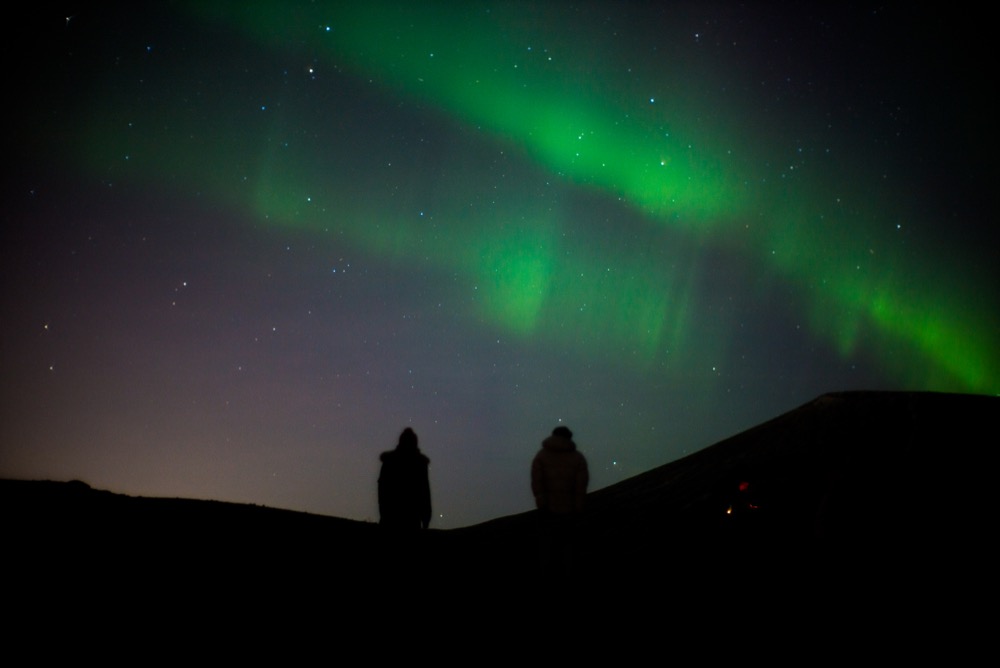 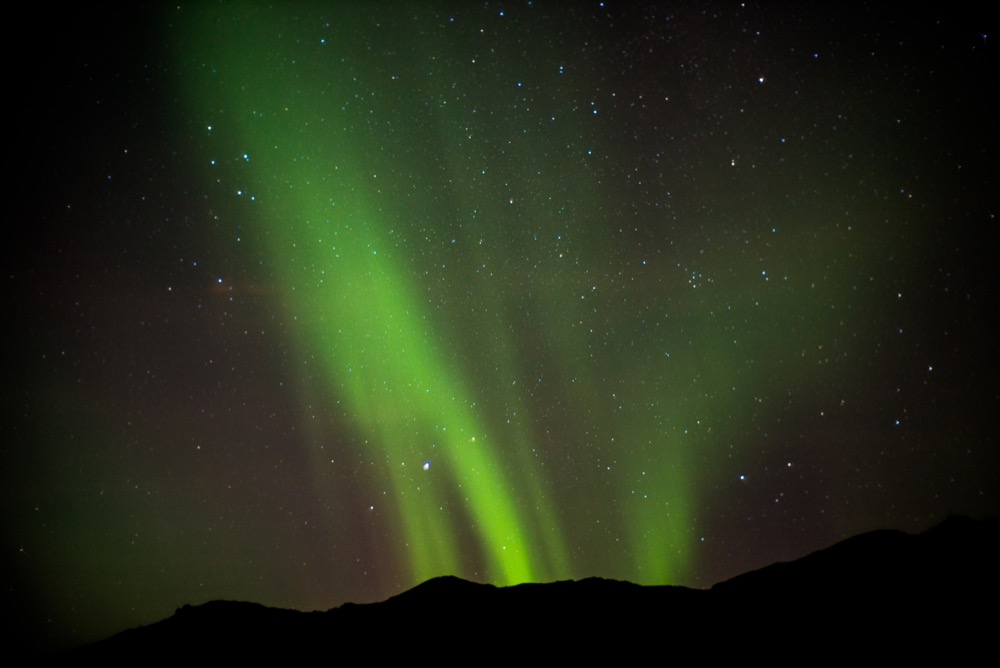 It was difficult to take in, though none of the colours were quite as intense as they had been when we first stopped. Just as people were getting back into the busses to warm up though, that dramatically changed, with a huge line quickly appearing. It started to expand in circles, as the sky itself was ripping open.

Before long, the bursts started to explode in an amazing display of green, purple and white, with the lights appearing to ‘dance’. At this point our guide freaked out, banging on the side of the bus to tell those that were inside to get off: “Have you any idea what you are missing?!”. 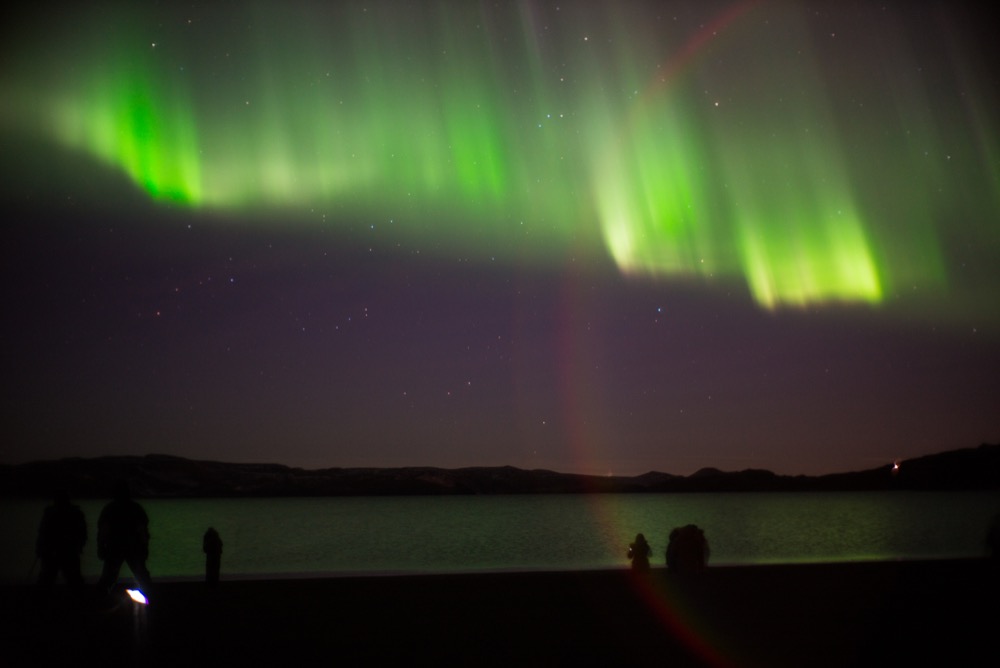 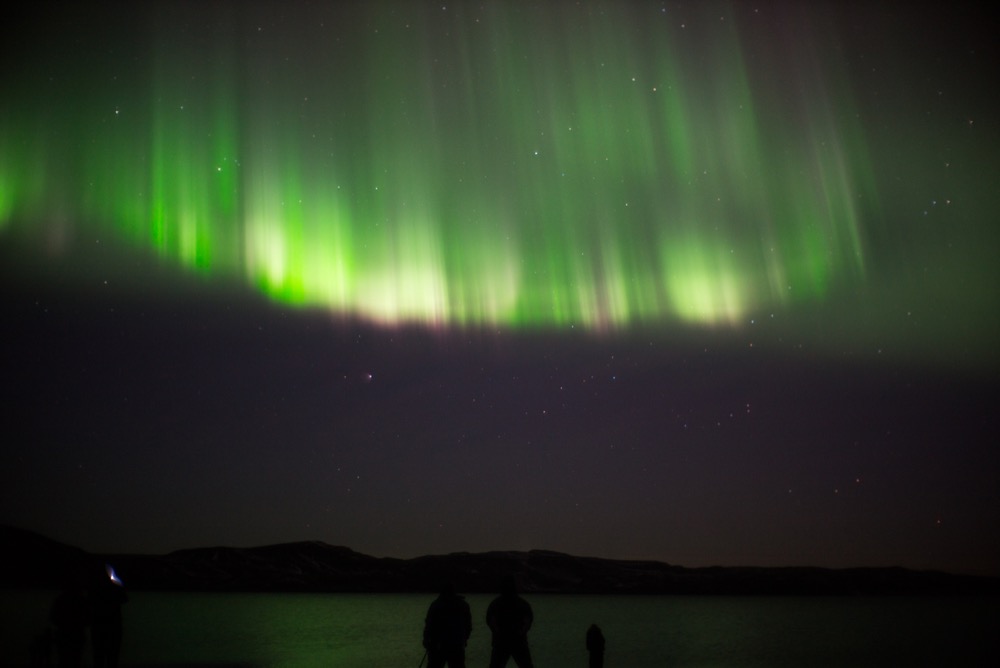 You could see them literally moving across the sky as if it was a projection. 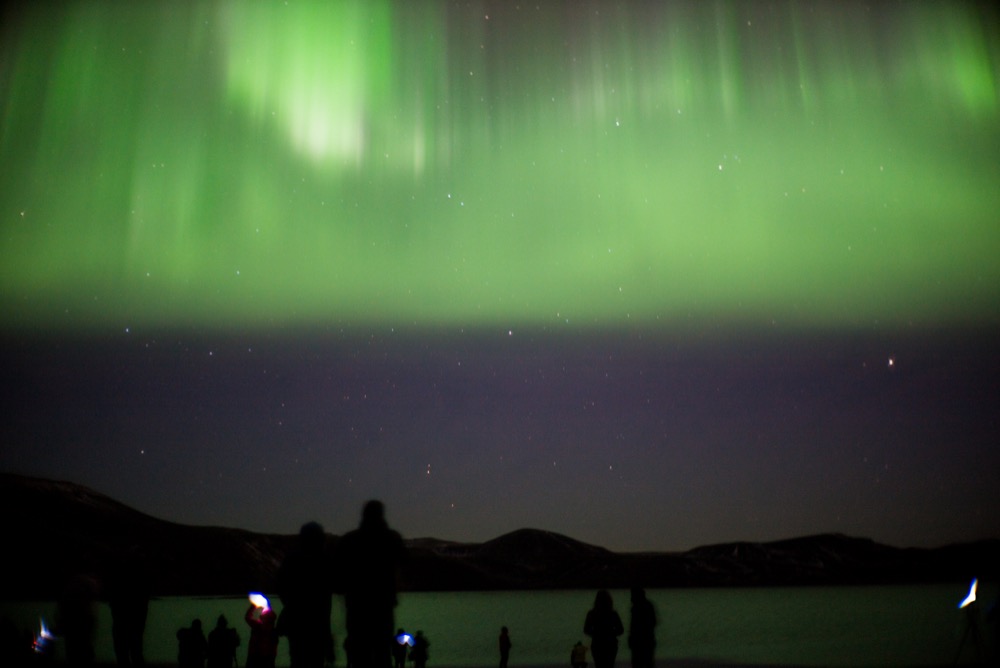 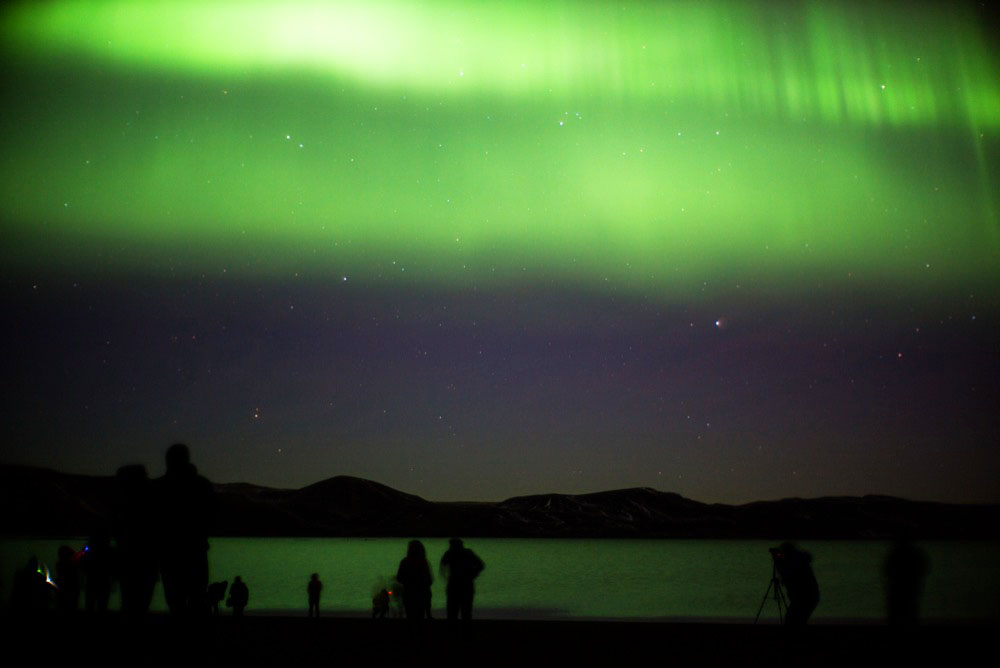 As if it couldn’t get any better, the rest of the sky began to fill up with multiple arcs, all crossing over one another in the middle, and showers of green light appeared from behind the mountains. It was impossible to know where to look, and felt a bit overwhelmingly surreal… particularly with the moonlight shining over the lake. 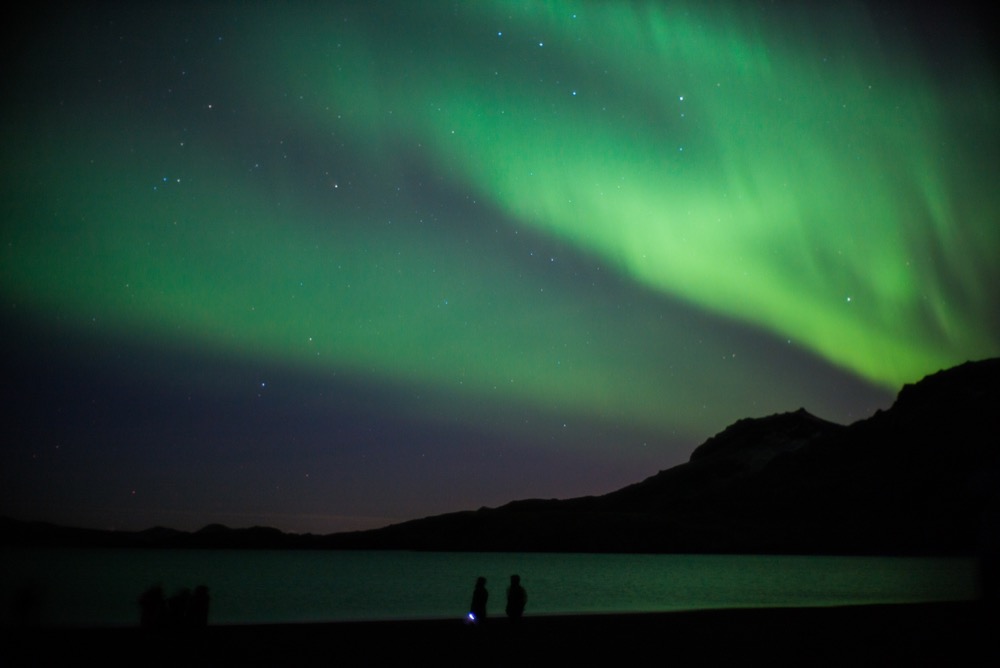 This time, rather than augmenting reality, the pictures don’t do it justice. 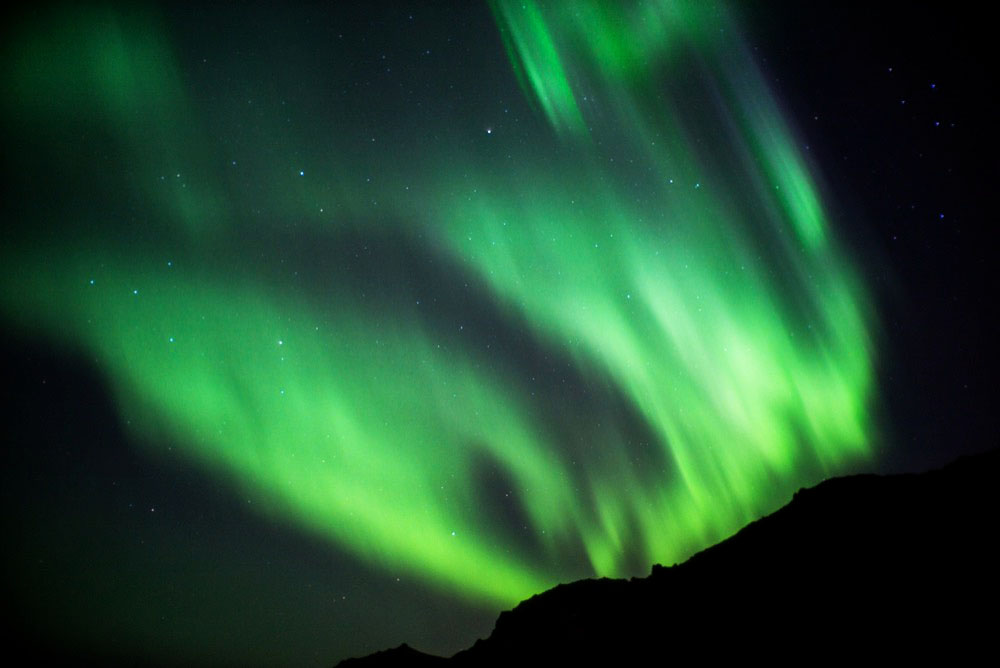 It was truly spectacular. 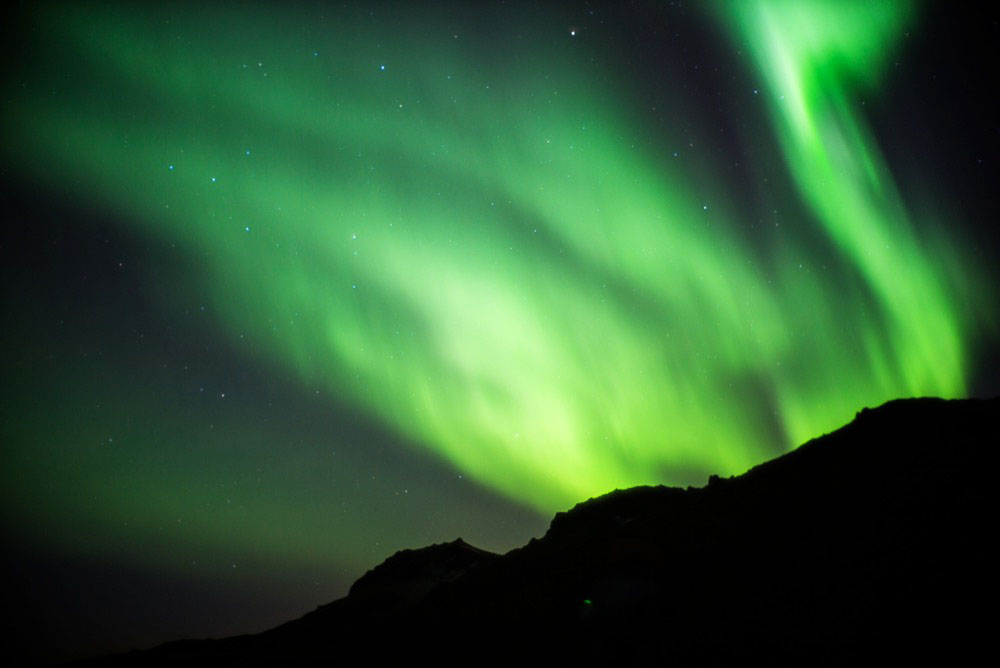 I set up my wee Sony RX100 for Grace, and she got some cool long exposure shots that show off the colours: 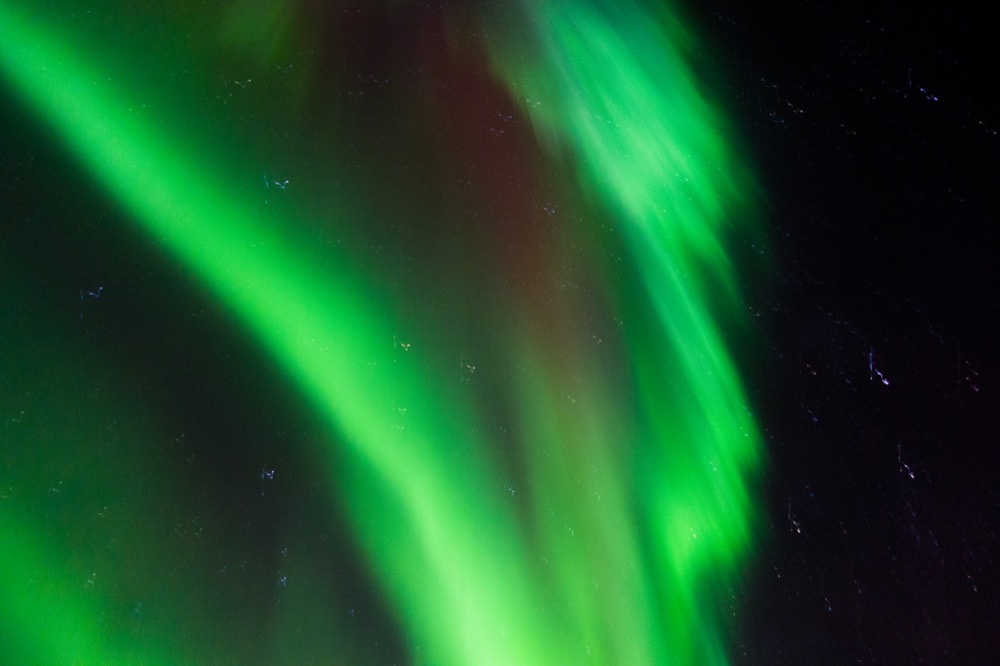 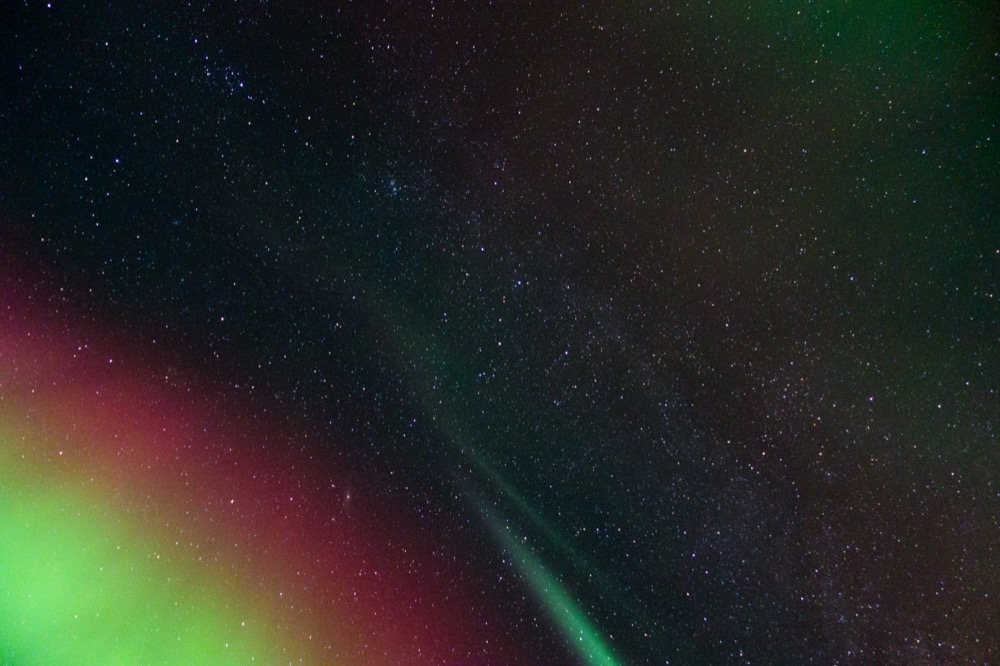 Afterwards, the drivers and guides all told us how it was one of the best Northern Lights displays they had ever seen, and that seeing the whole sky lit up like that was extremely rare. 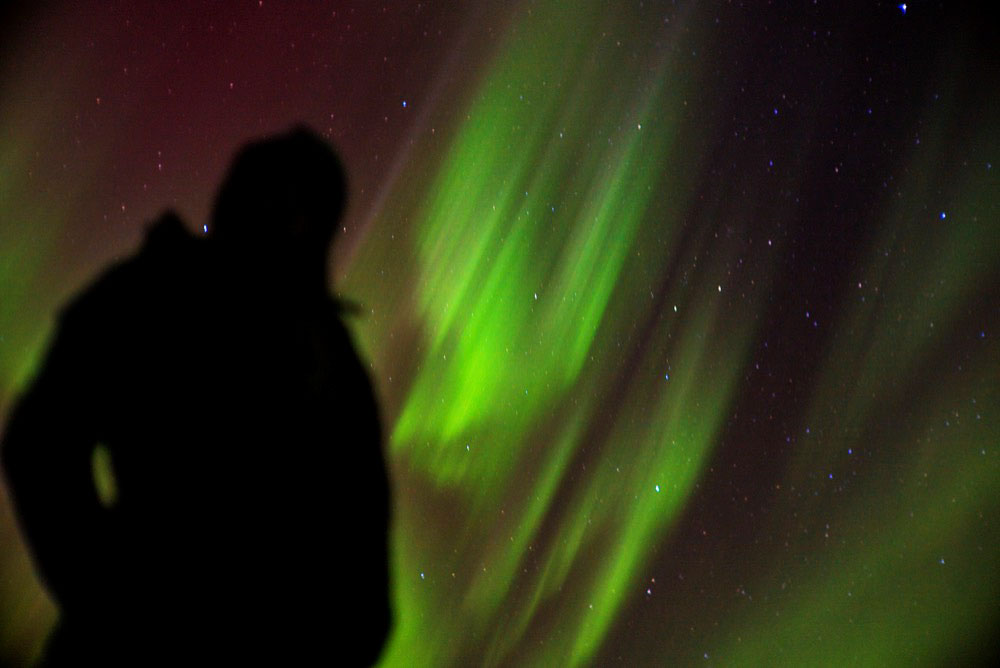 It was almost definitely the most amazing thing I have ever seen, and I’m still not sure that I can process it properly. I wish we could have stayed out there all night, and despite longing to witness them like that again, it feels like it was a once in a lifetime experience.