Before we went to Iceland, I really wanted to get to see the famous black sandy beaches that lie on the south of the island. It seemed like it was going to be impossible to do without hiring a car, until I stumbled upon this full day tour from Reykjavik Excursions.

We booked up for our last day, made sure we had warm clothes, and packed a bag full of crisps and sandwiches and other things to eat along the way.

As soon as we left Reykjavik, the views from the bus window started to get pretty cool, with snow covered mountains in the distance. No pun intended. 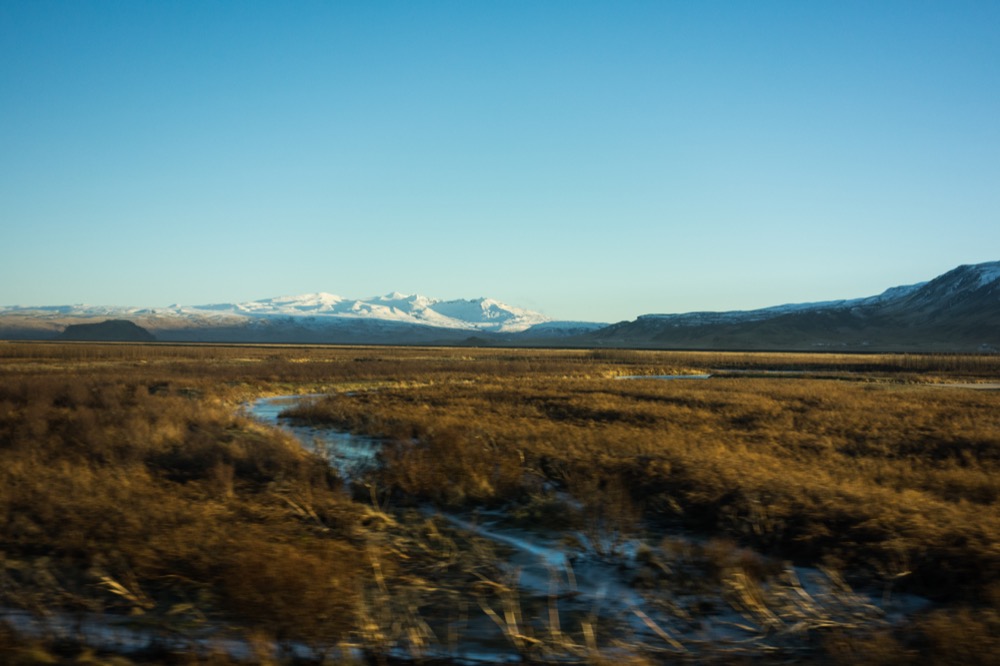 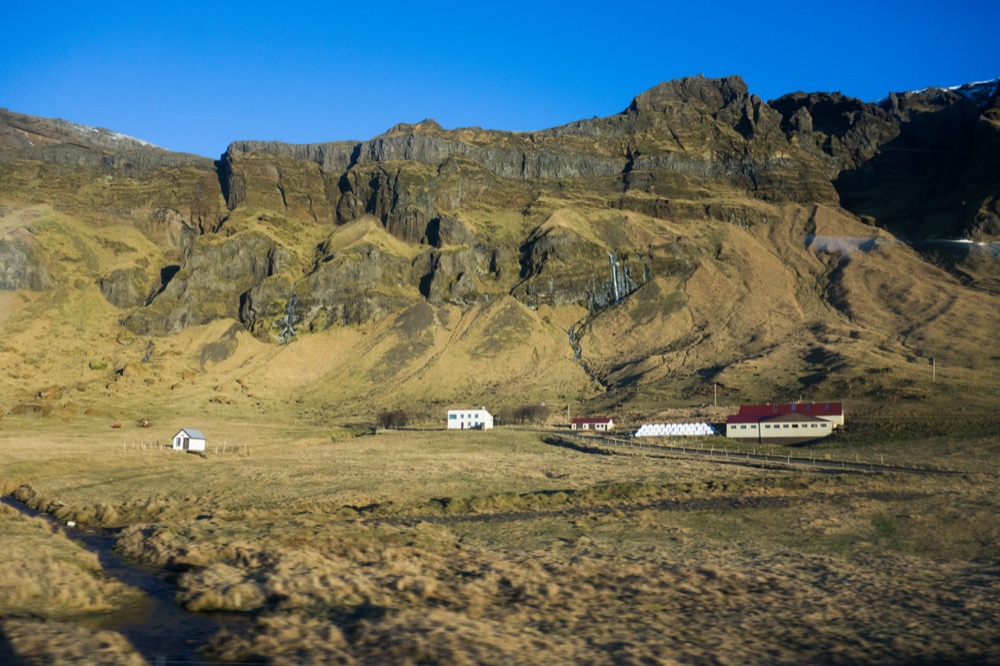 Apparently Iceland is self sufficient in a whole host of things, from dairy to pork, to lamb, to potatoes, to beef, to carrot, turnips… etc. Just as well really, since having to import everything can’t be a great situation to be in. 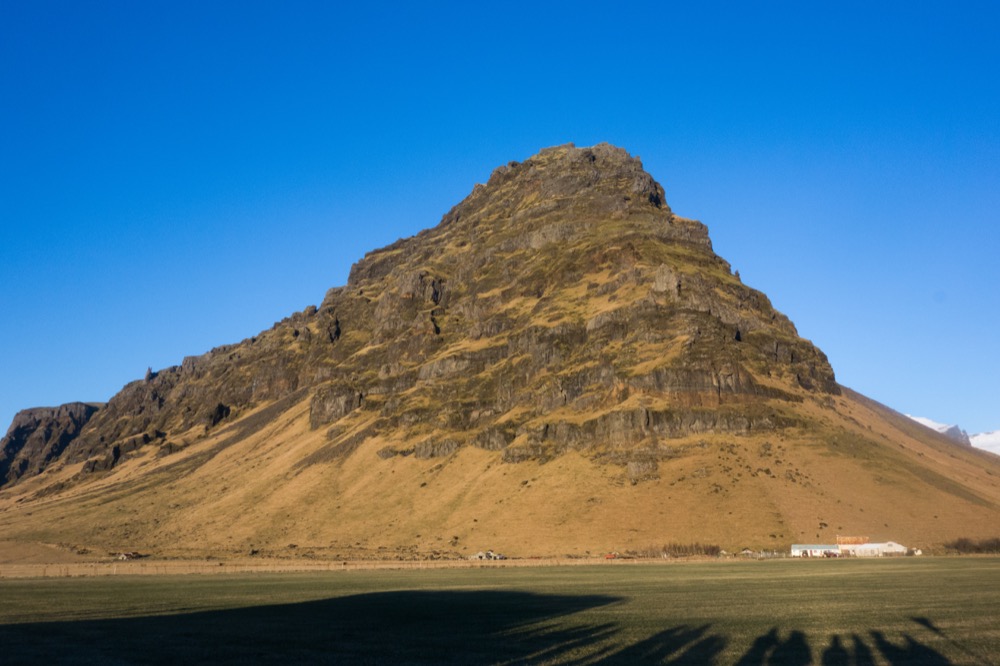 The first stop was at the site of the volcano that erupted back in 2010, causing all the chaos with the flights getting grounded. Remember the whole ‘ash cloud’ debacle, and when Ryanair sent up a test flight to try and prove that it was safe…? Yep, that volanco. It was just behind this idyllic looking farm that you can see in the next picture. 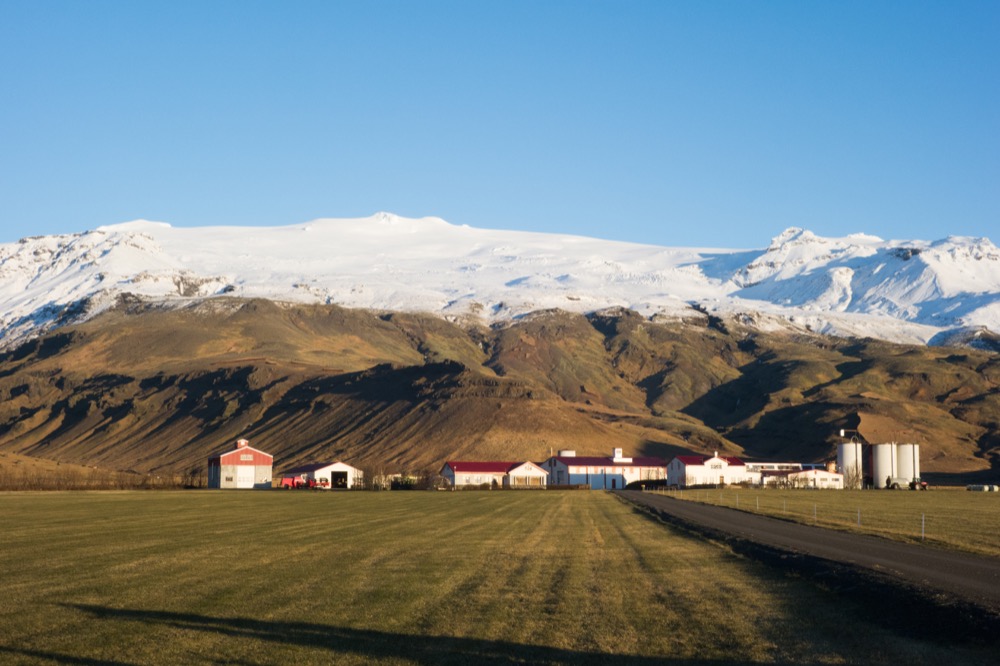 There was a sign with some photos showing what it looked like at the time of eruption. Pretty nuts. I can’t imagine what it must have been like to be in the farm at that time. 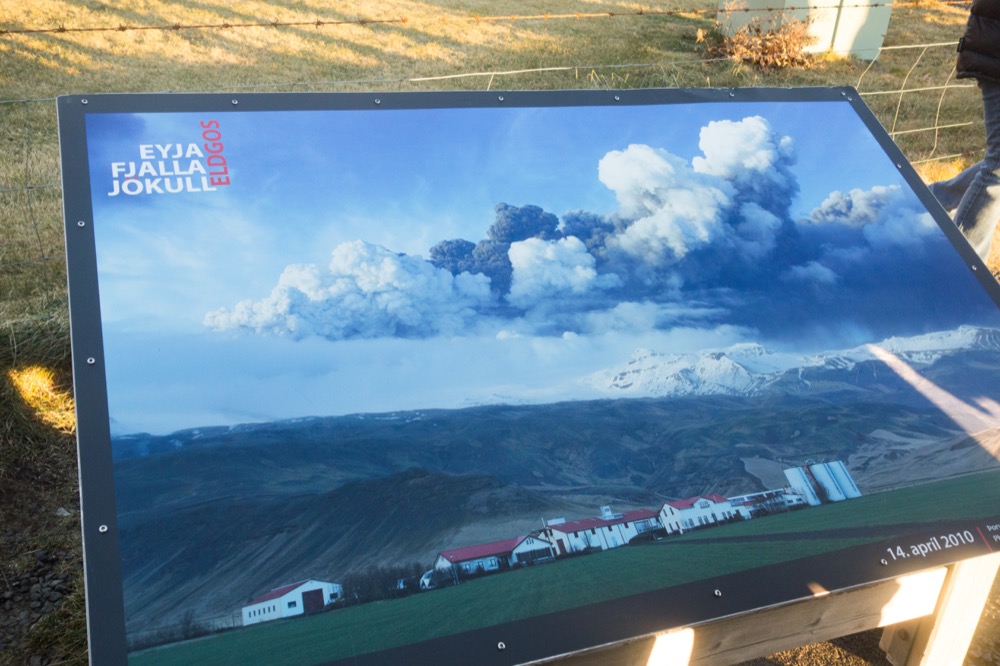 Not sure I would have stuck around long enough to take a picture either.

The next stop was at the site of a real, honest to God glacier. The bus parked and we had half an hour to take this long, rocky path that was covered in ice to where the thing actually was. 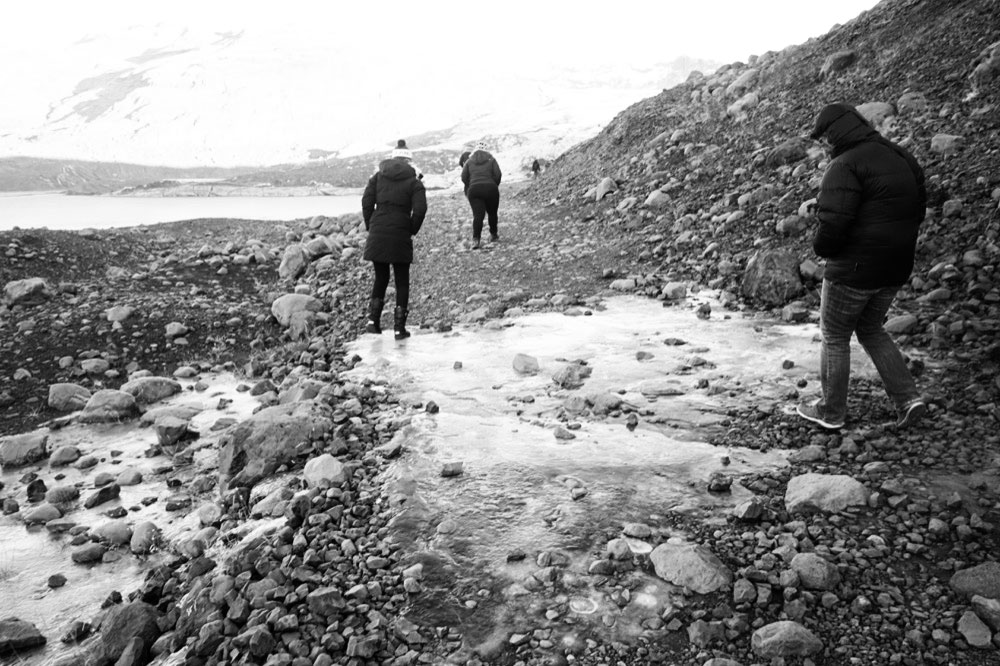 That turned out to be a ridiculously short amount of time, as it took about 15 minutes to get there, and 15 minutes to get back. As a result most of the folk didn’t make it, giving up before they reached it. The view as you came round the hill was pretty amazing though. 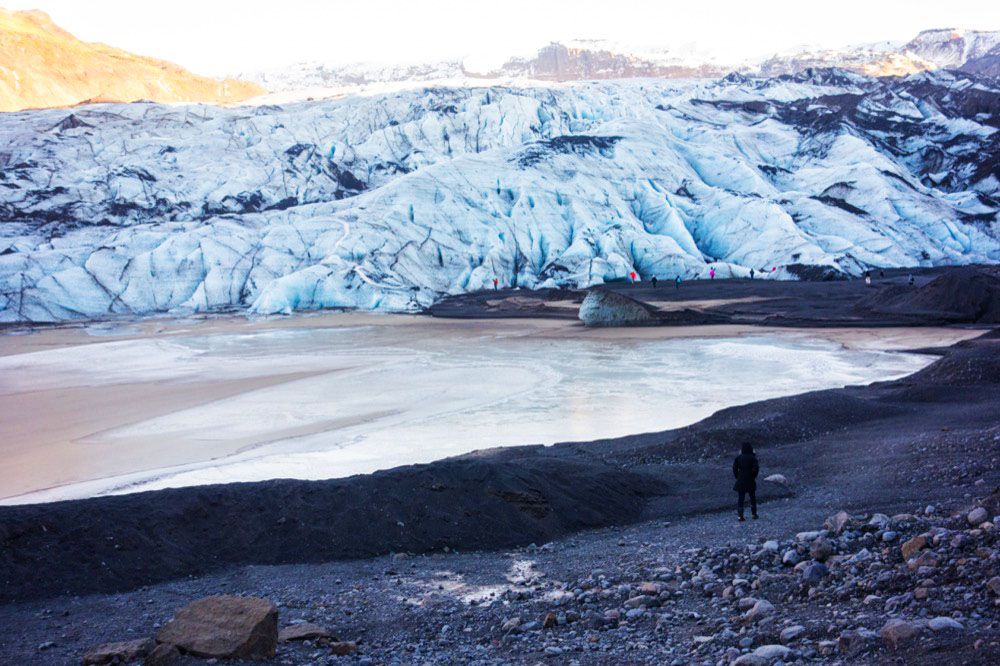 The ice was thick (duh), and a beautiful blue colour. 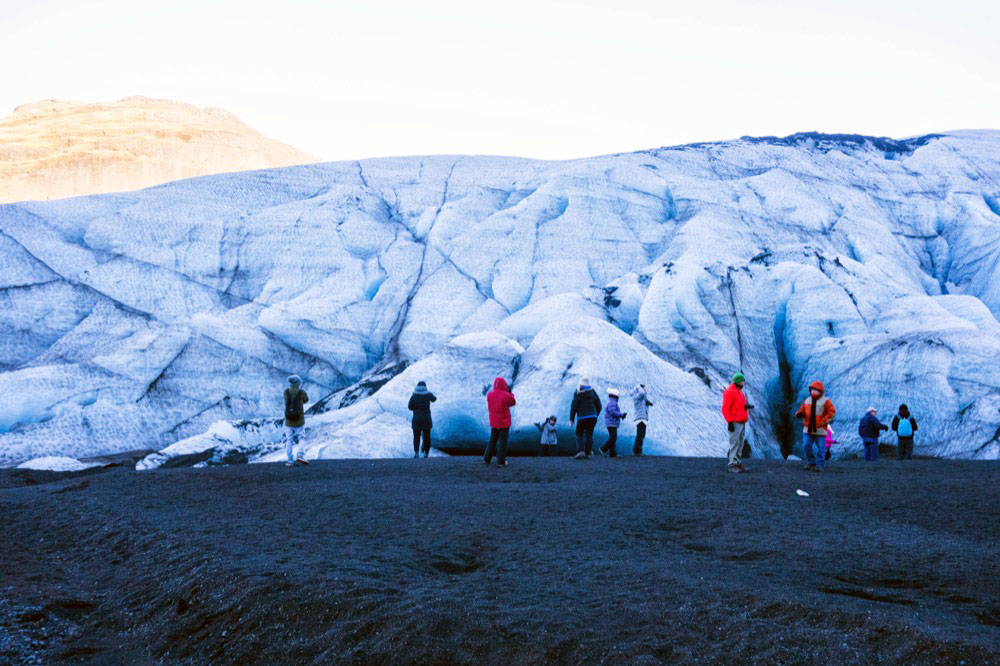 Up close it was even more amazing. I’ve never seen ice so deep and beautiful. The pictures obviously don’t do it justice. 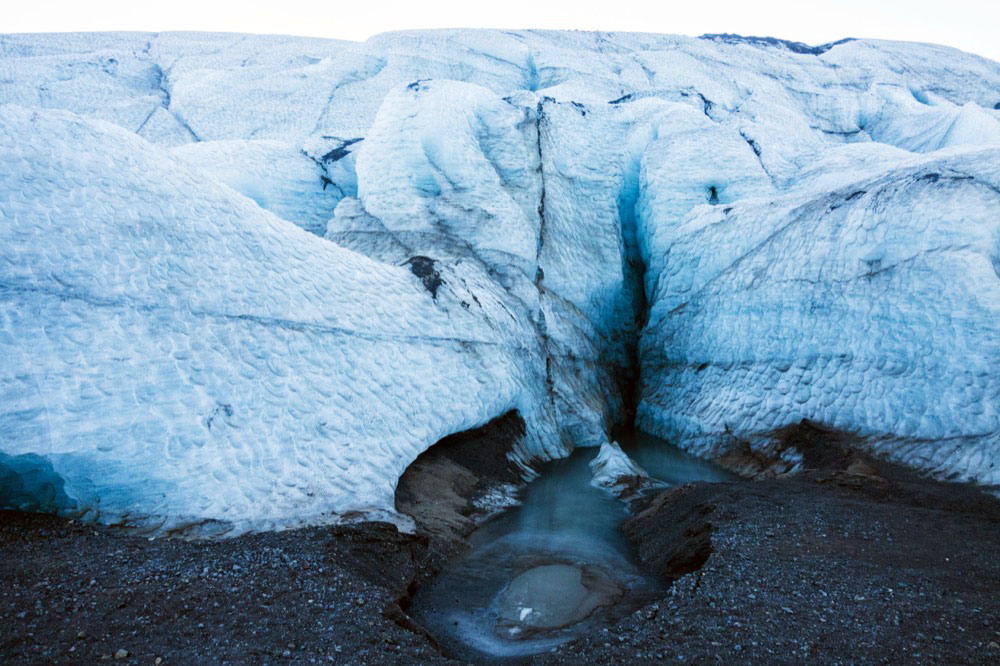 The patterns were gorgeous. 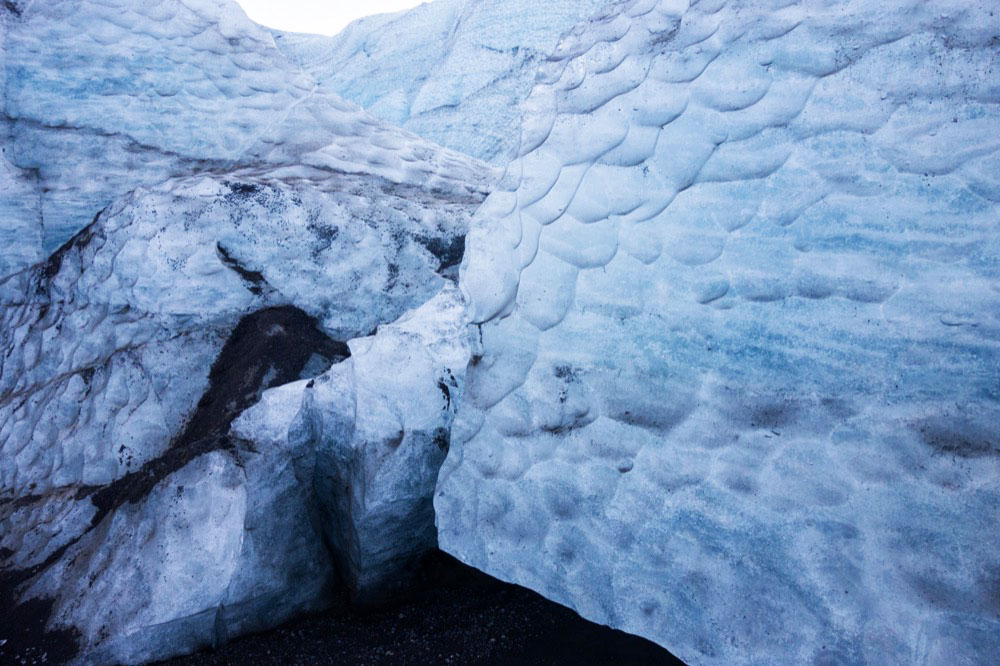 I could seriously have stayed there for hours looking at the ice, so I was pretty pissed off that we only had a few minutes. They should have allotted more time for this part of the trip, and could easily have dispensed with the 45 minutes we spent at a local folk museum later on. No disrespect, but that was not the most thrilling part of the day. 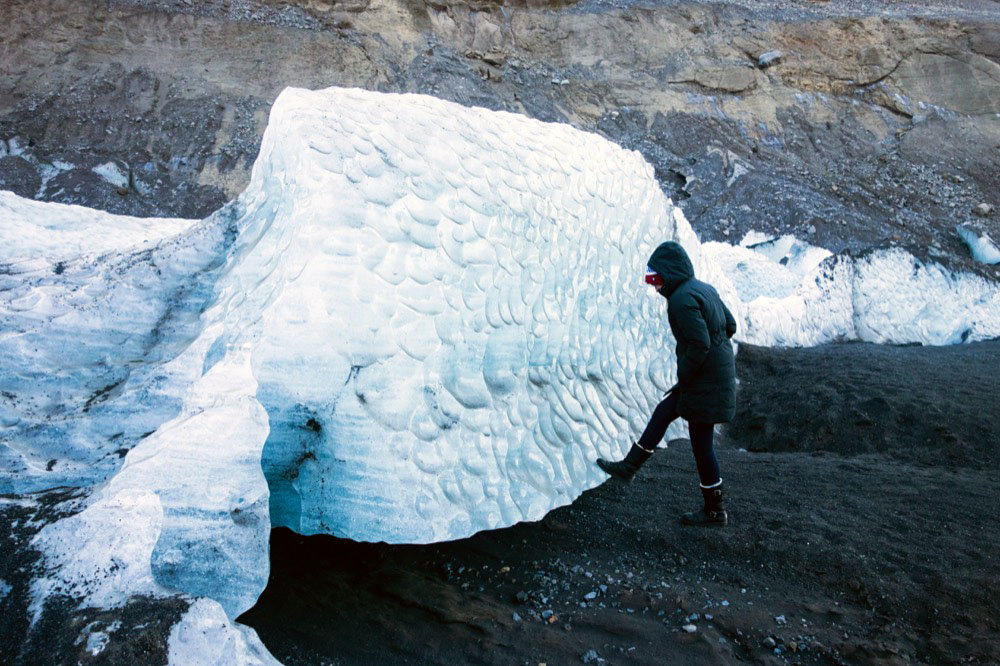 I took loads of film pictures, but one of the bloody reels snapped when I was rewinding it and I’m sure the whole thing got exposed to the light outside the cannister. I’ve saved it in a darkbag though, so we’ll see if anything comes out.

Next, we headed further south to the small town of Vik, which means ‘Bay’ in Icelandic. Reykjavik means ‘smoky bay’ apparently. Pretty cool. 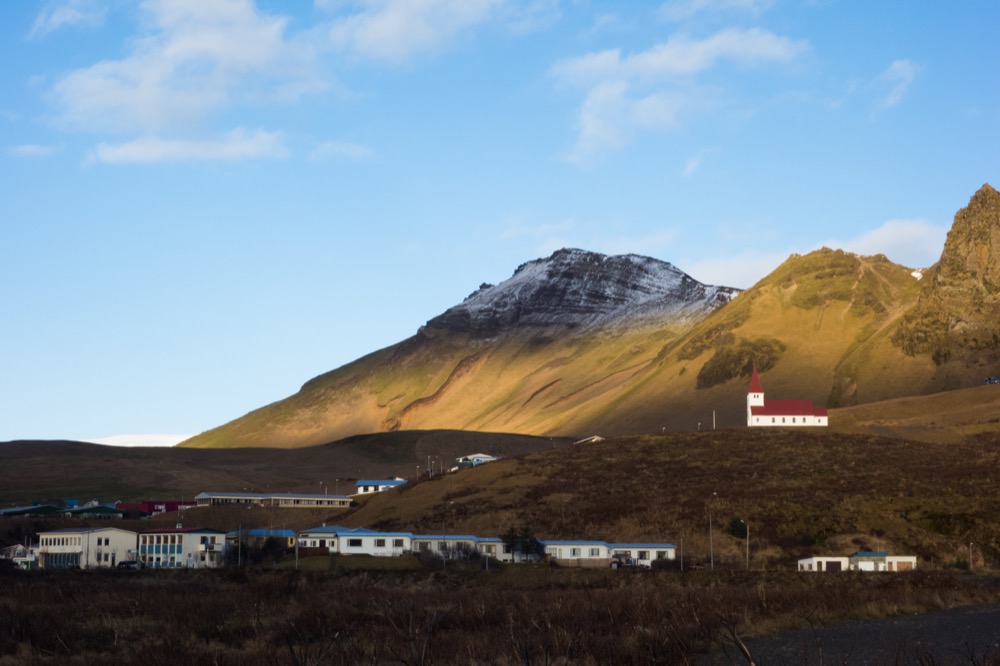 Vik is where the most famous of the black sandy beaches and unusual rock formations are. While most of the group were having their lunch, we headed down to get a closer look. 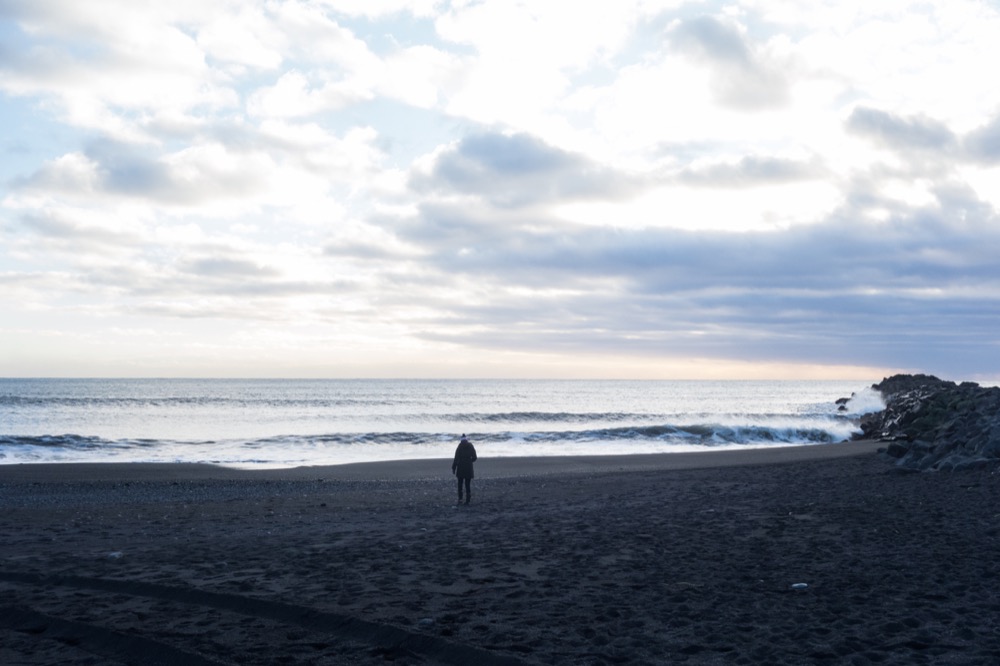 The sand was pretty weird. 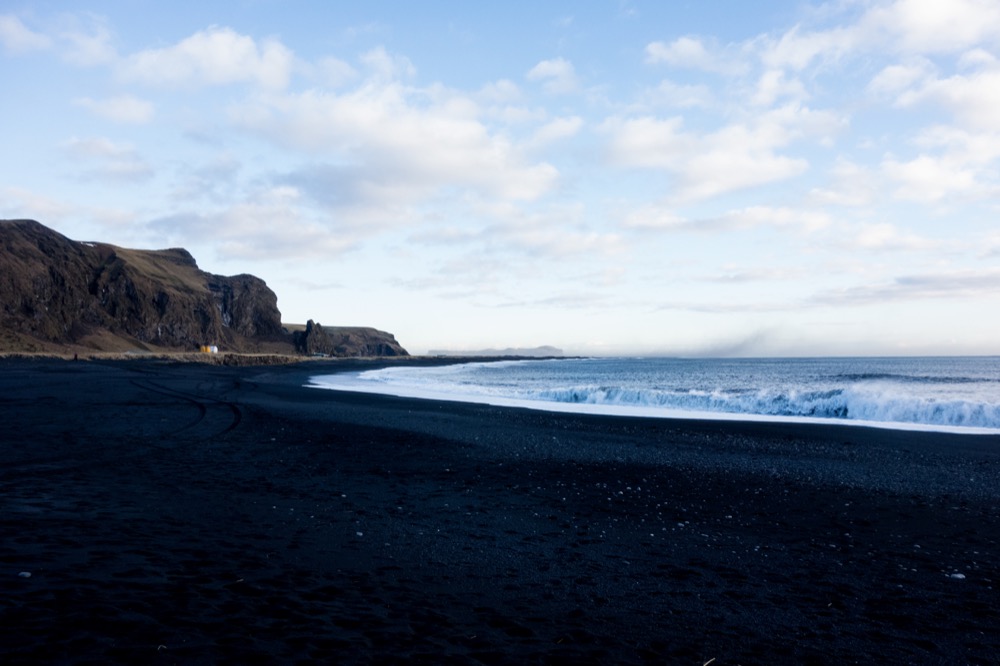 and the rocks off in the distance were pretty impressive. 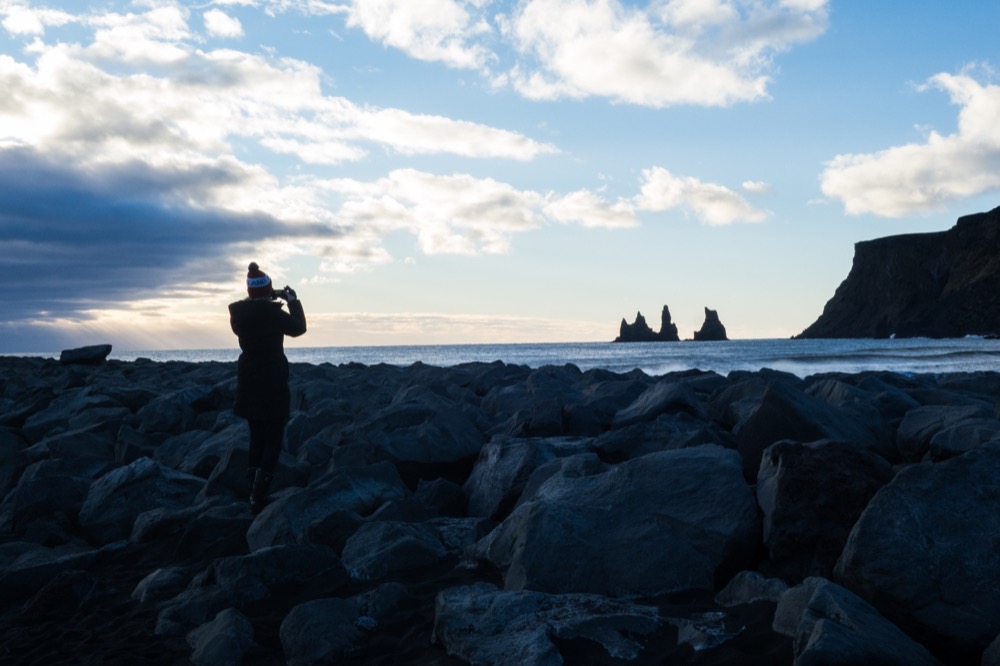 To be honest, I was a bit disappointed at this point. Yeah, it was cool, but not quite what I’d imagined it to be. 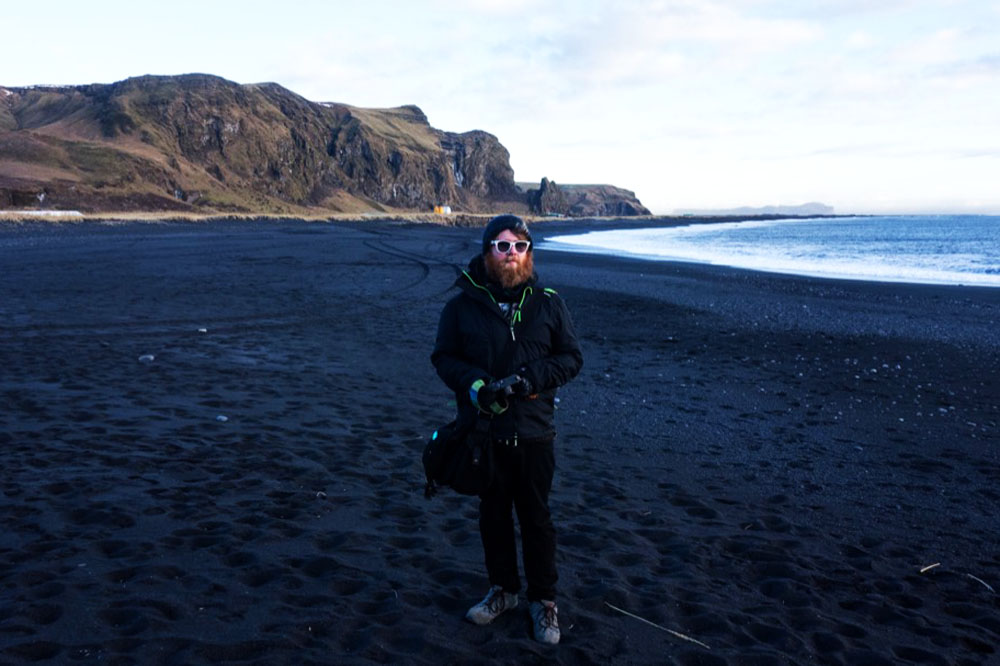 However, after lunch we went round the other side of the cove, where it got way better. 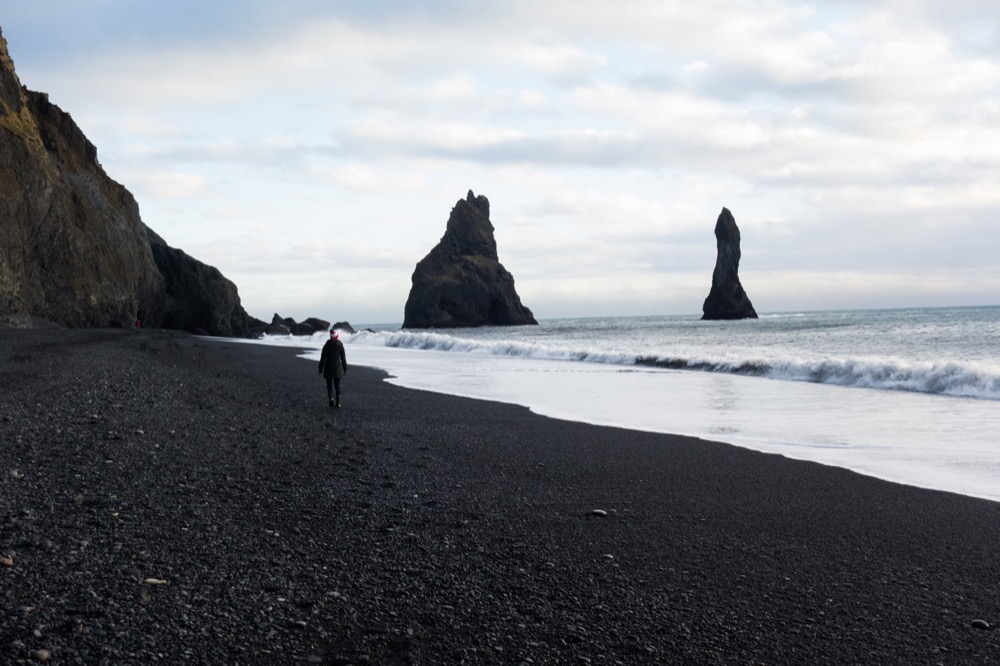 The white of the waves lapping over the black sand was pretty amazing. 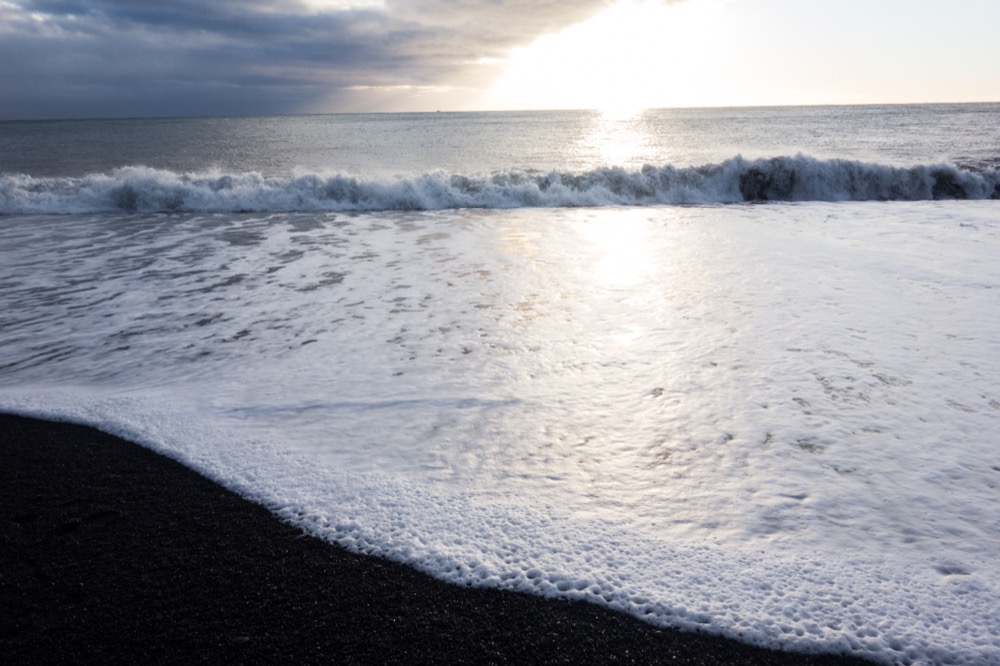 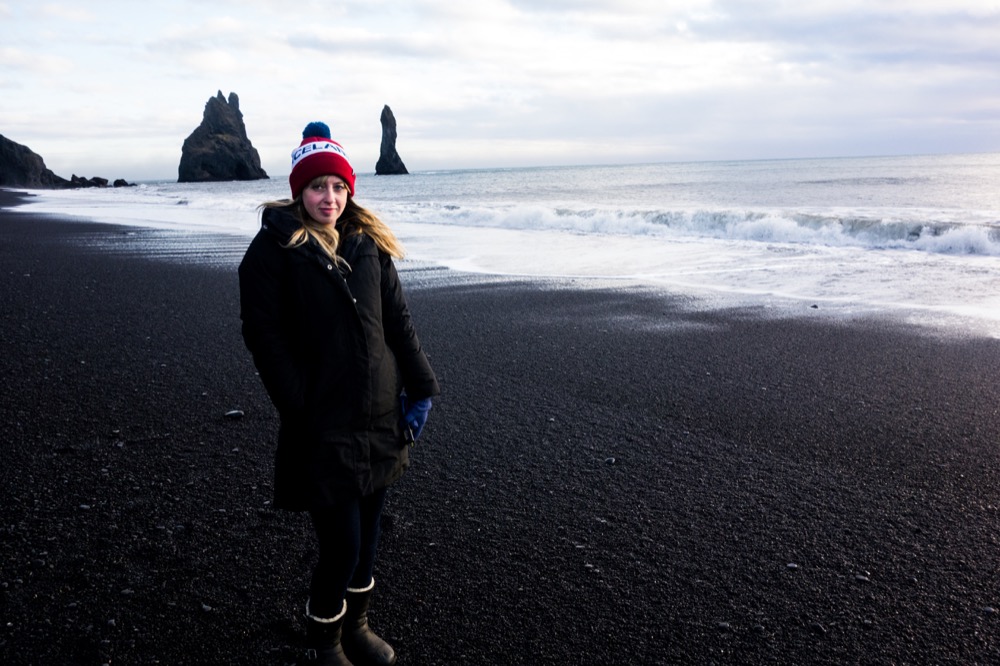 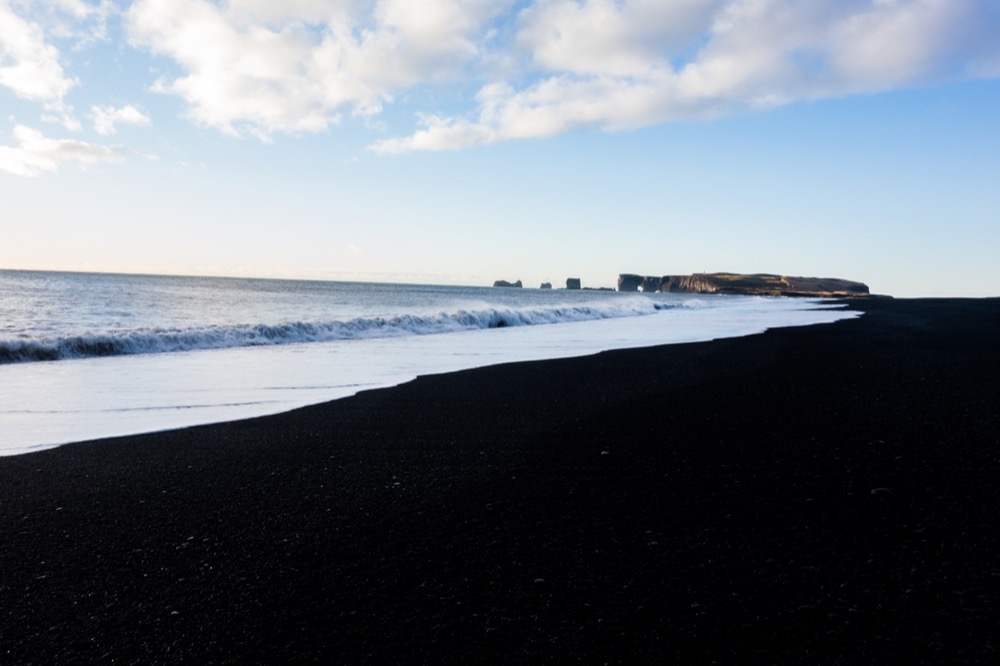 As well as that, there was a large cave on the beach, with the same strange hexagonal pillars that we saw in Fingal’s cave, off the West Coast of Scotland. If you haven’t read that blog before, it’s worth a look. 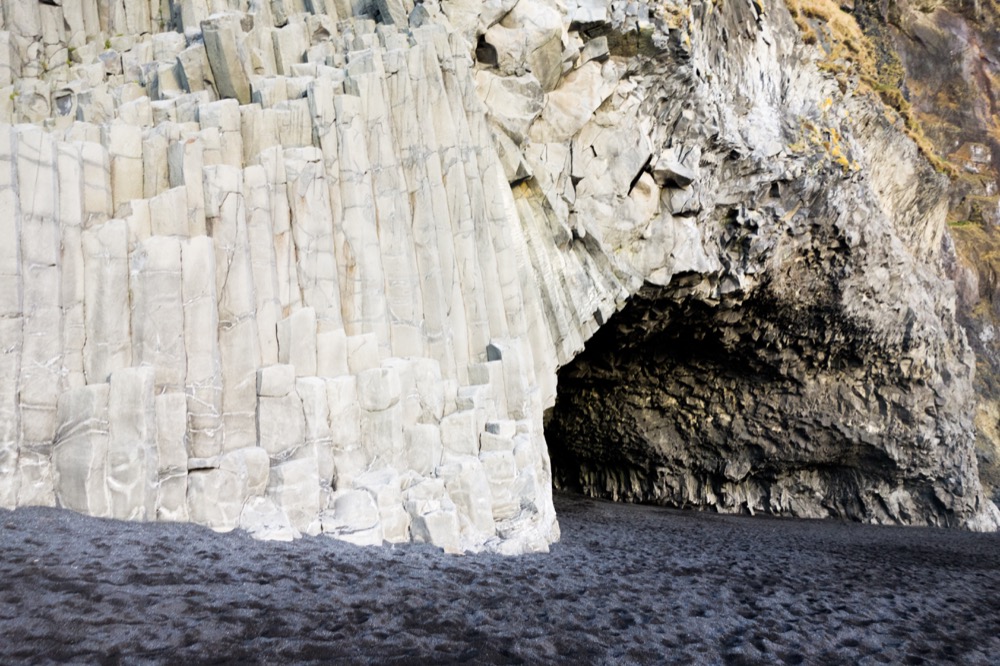 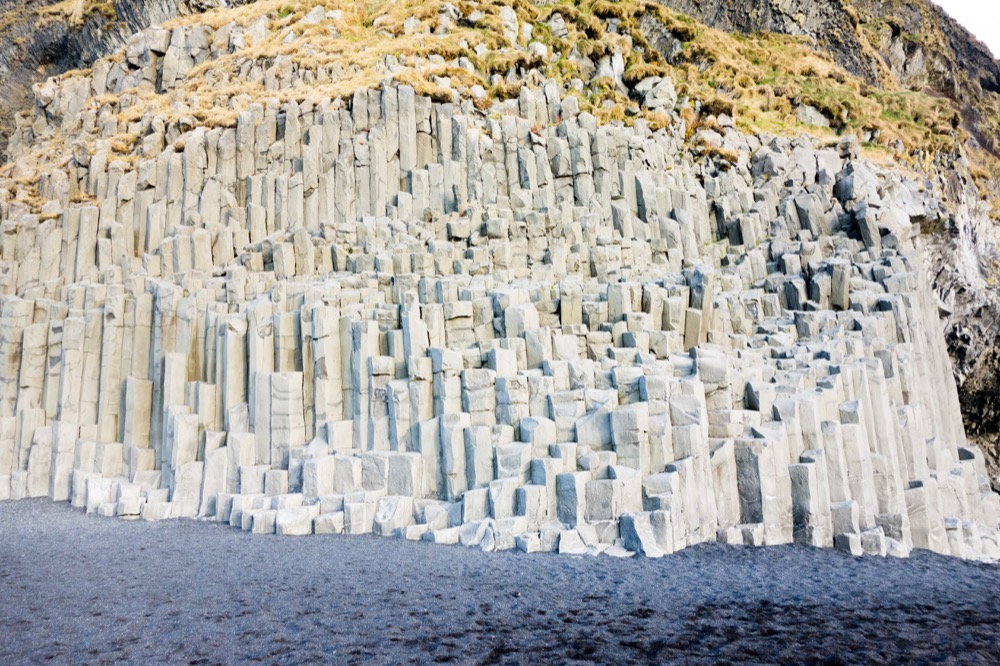 I loved this place. Totally worth the trip. 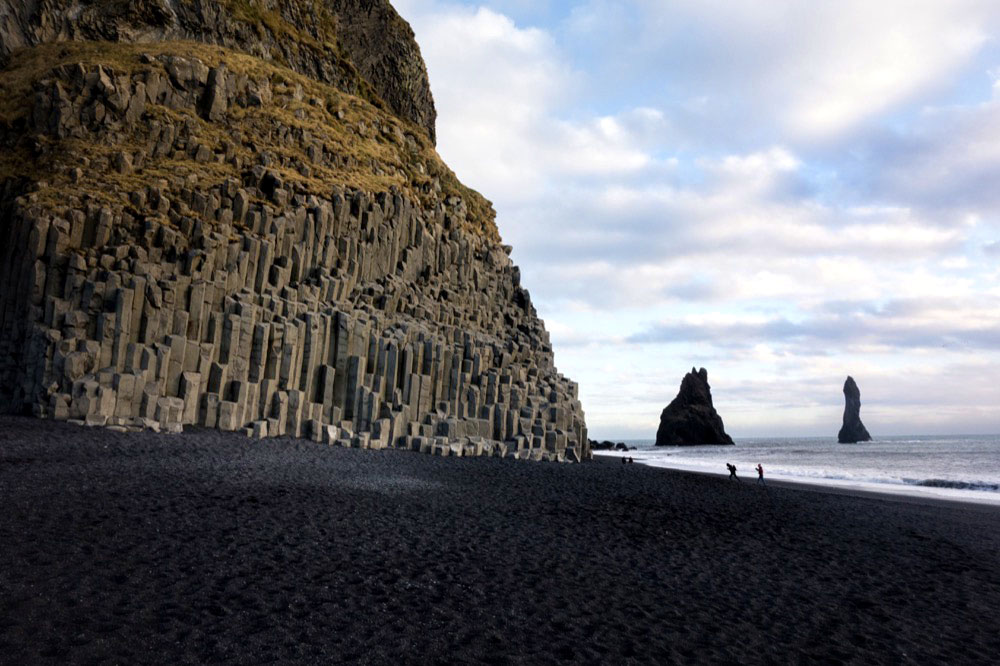 There was more to come though, as we stopped at a couple of waterfalls on the long trip back to Reykjavik. I won’t even pretend to know which one was which, or what they were called. They just looked amazing. 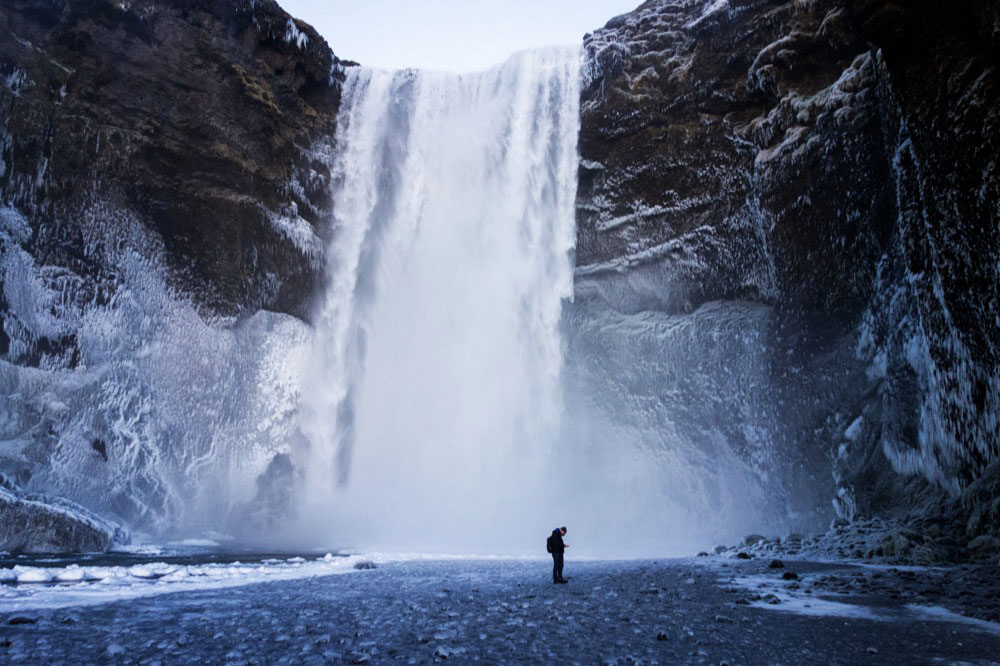 It was so cold that the mist coming off the waterfall froze against the rocks before it hit the ground. 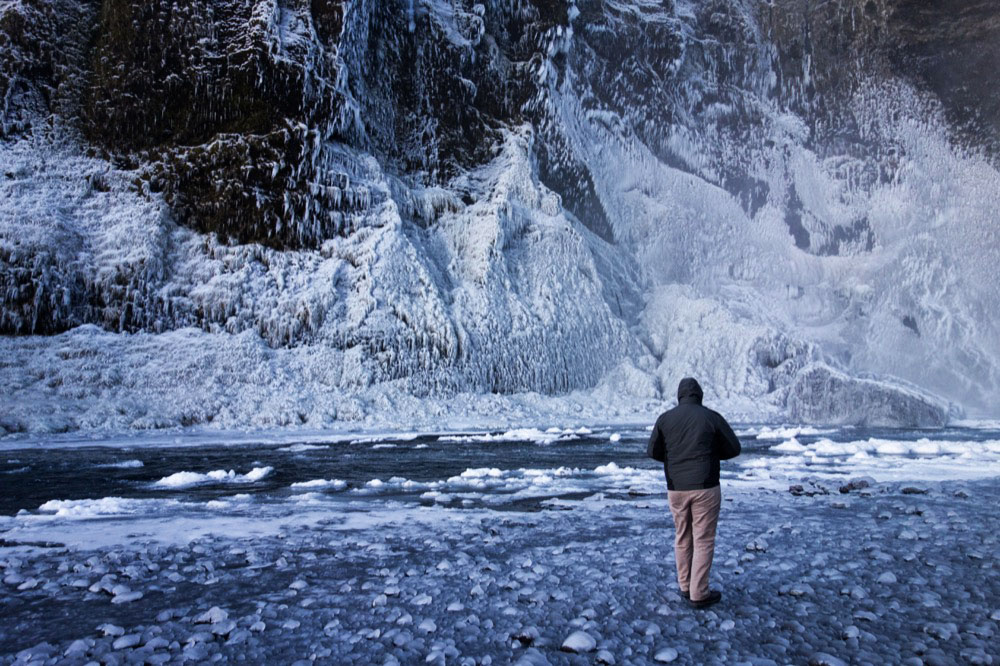 Pretty amazing. The whole area was covered in ice. 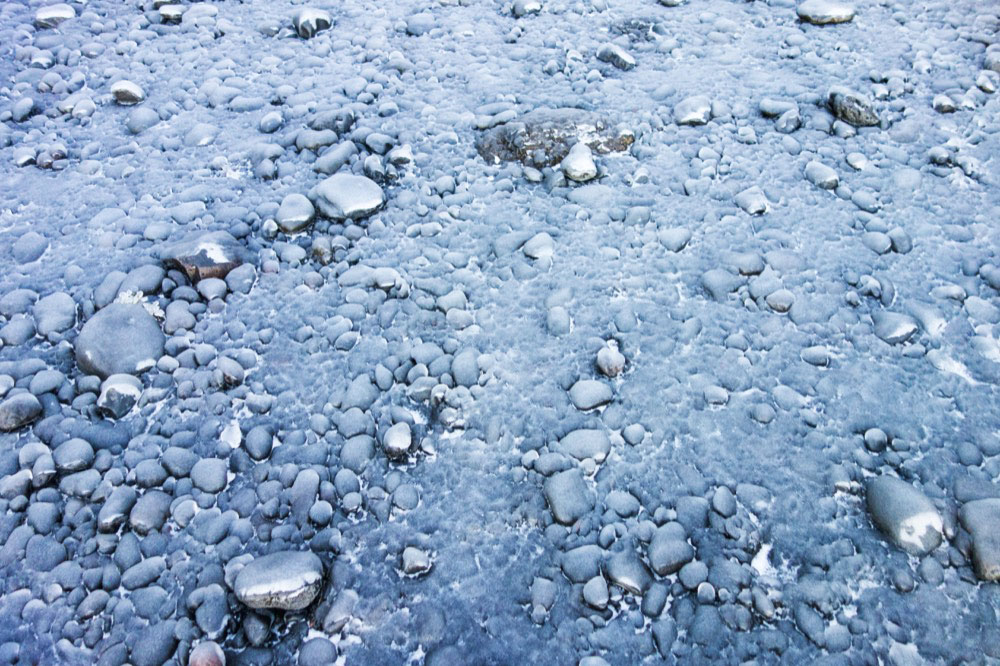 By this point, it was beginning to get pretty dark, but we had one last waterfall to go. A smaller one this time. 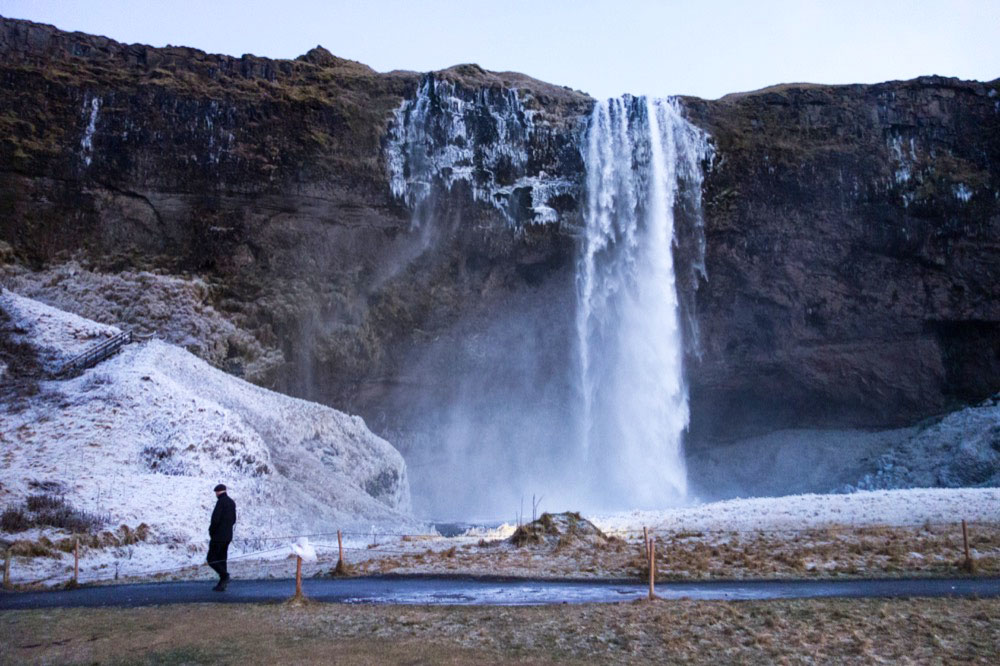 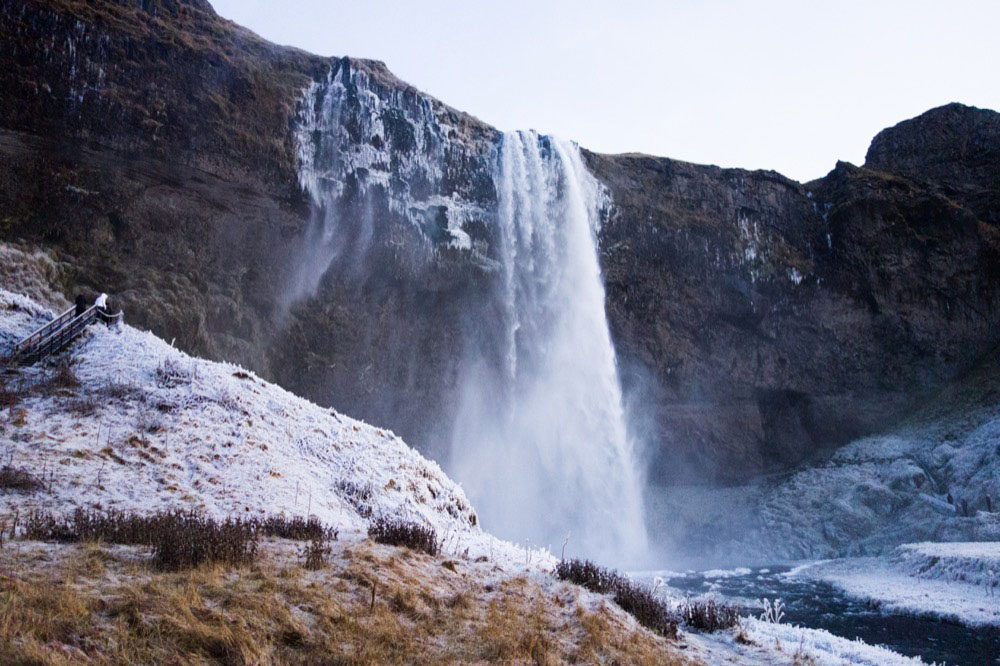 All in all, it was a great day. It only served to whet my appetite though, and make me wish that we had more time to really explore on our own – rather than being stuck with the limited confines of a bus tour. Maybe in a couple of years we’ll go back in the summer, rent a car, and do just that.