One of the most common questions people have when they see me kicking about with some bashed-up old camera is how I process the film. Often, they have Hollywood infused romantic visions of red lights and dark rooms, and when I explain that you only really need that kind of setup for wet printing… the disappointment is obvious from their faces. That’s me. Shatterer of dreams.

There are of course plenty of other folks who understand a bit about film, and many who have developed it themselves – whether recently or in a high school photography class. However, something that even these people find hard to believe is that it is not only possible, but fairly simple to develop colour film in your kitchen.

For whatever reason, there is a general misconception about the difficulty of the C41 process, and in practice, it can actually be more straightforward than black and white, as you don’t need to vary the development time depending on the type or speed of the film. The main stumbling block is the temperature. With black and white, the chemicals are usually quite happy at around room temperature – or 20C/68F. In contrast, standard colour development requires the mixture to be at 38C/100F.

With colour film, there’s also less of a margin for error with the temperature. If you are more than a couple of degrees (C) out, you run the risk of fairly severely under-exposing, over-exposing, or having pretty wild colour shifts. With the commercial C41 kits available, as you get close to the maximum number of rolls they can handle, you have to leave the reels in the mixture for much longer, which means the chemistry will cool down over the development period, unless you have some way of maintaining the temperature of the tanks.

I have been developing C41 film for longer than I care to remember, and I have tried a bunch of different methods to get the water temperature where it needs to be. The most common approach was to fill up a big tub full of water, place the bottles of chemicals in the water, and get them to the desired temperature. Once they are, you can develop away.

Keeping the big tub of water at a consistent temperature was the tricky part – as there weren’t a whole load of reliable options out there. People tried various fish tank heaters, but these weren’t powerful, accurate or granular enough to get the desired results. There were a couple of alternatives, such as the Novatronic heaters below – but while these could hit the desired temperatures, you couldn’t control the temperature as finely as you really need to, and they took a fairly long time to heat up enough water for the heat to transfer through to the liquid in the bottles.

Eventually, I broke my Novatronic, and didn’t bother replacing it. Instead, I decided just to chuck a bunch of very hot water into the tub, and constantly measure the temperature of the bottles until they reached the required 38, and then develop the film – hoping that the tanks wouldn’t cool down too much over the required time period.

This was fine, and I managed to get away with it for a while, but trying to get the chemicals up to the desired temperature every time I wanted to process some colour film became such a chore that it was sucking any kind of enjoyment out of it. Not to mention the fact that I was starting to have issues with the lack of temperature stablity over longer development periods. I had some success by reducing the amount of film I developed at once (less liquid = quicker to heat up/cool down), but again the stability was a problem.

While browsing a photo supply site for some new chemicals, I happened upon a curious device: the CineStill TCS-1000. This strange looking water heater had apparently come out in 2019, but only relatively recently become more widely available in the UK. Amongst other things, it claimed that it could not only heat up and maintain the temperature of a water bath, but also heat and mix the chemicals themselves. If true, this was a game changer. Rather than having to go through the whole boring process of filling up the water bath and waiting for the chemicals inside the bottles to heat up, I could heat them up individually, and then maintain them in the bath.

I tried to find a decent review that would specifically address whether or not this workflow would be possible, but they were all terrible – so I decided I’d just have to pick one up and see for myself.

Now, one thing that I hadn’t realised was that in the past couple of years, sous vide machines (the ones that cook meat in a water bath) had become much cheaper and more accessible – and that photographers had started to use these to maintain the temperature of their big tubs of water. Smart. If you look at the TCS-1000, it looks suspiciously similar to a fair number of these machines… and folks online were claiming that the TCS was literally just a re-badged cooking appliance – specifically the Aicouk Sous Vide SV-8001. So, what’s the deal? Well, I asked CineStill outright whether this was the case, and they said:

Either way, when I had a look at sous vide machines, the cost of a decent model was similar to the TCS-1000. The cheaper ones I tried out were significantly under-powered in comparison to the CineStill device, and took much longer to heat water up. So whatever the situation, the TCS seems worth the money.

My TCS-1000 arrived and before I dunked it into any chemicals, I decided the logical thing to do would be to cook a steak. Please don’t tell CineStill, as they are probably obliged to warn people against this kind of behaviour – but it seemed like a golden opportunity that should not be passed up. 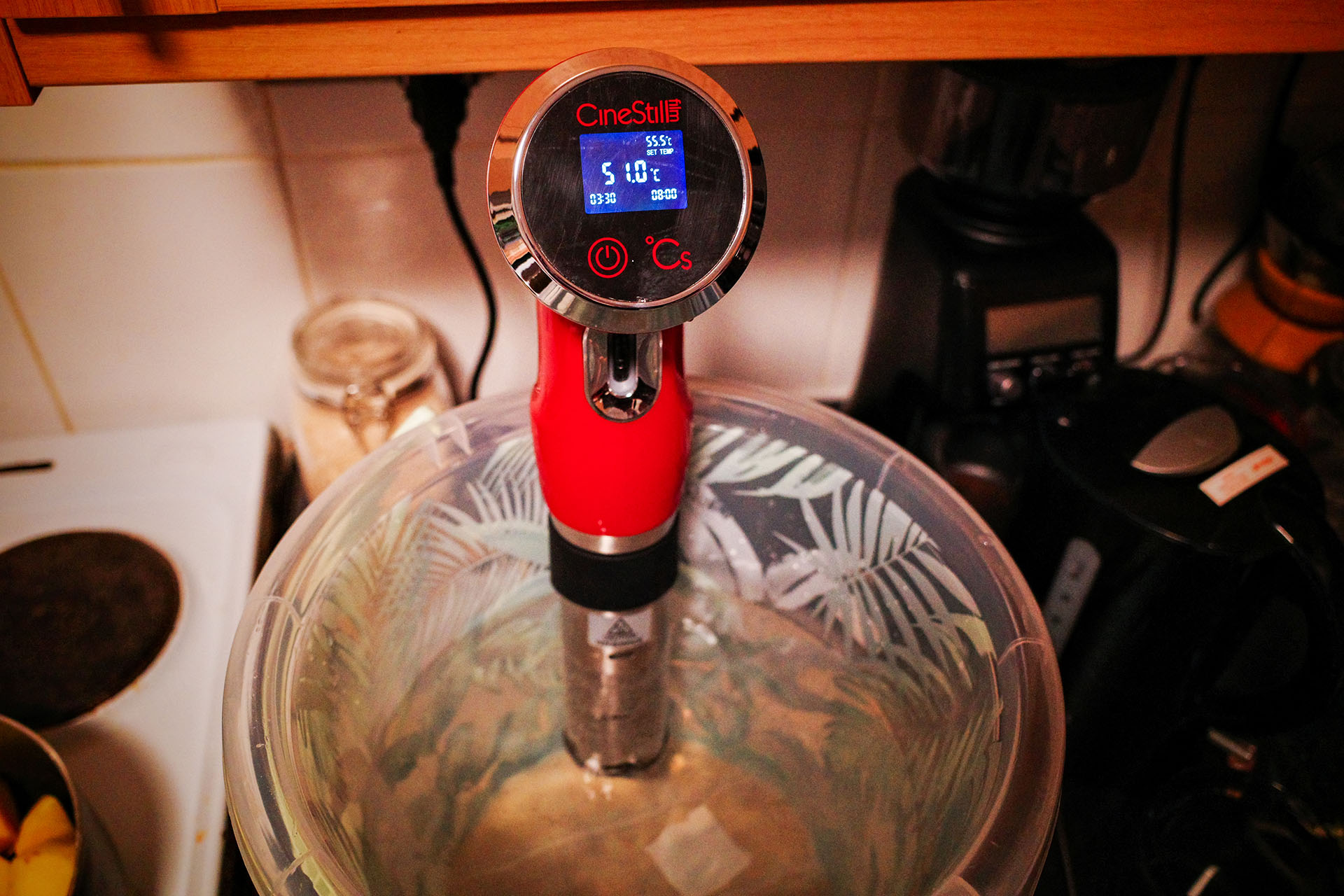 My immediate observations were:

Oh, and the steak? It worked out pretty good. 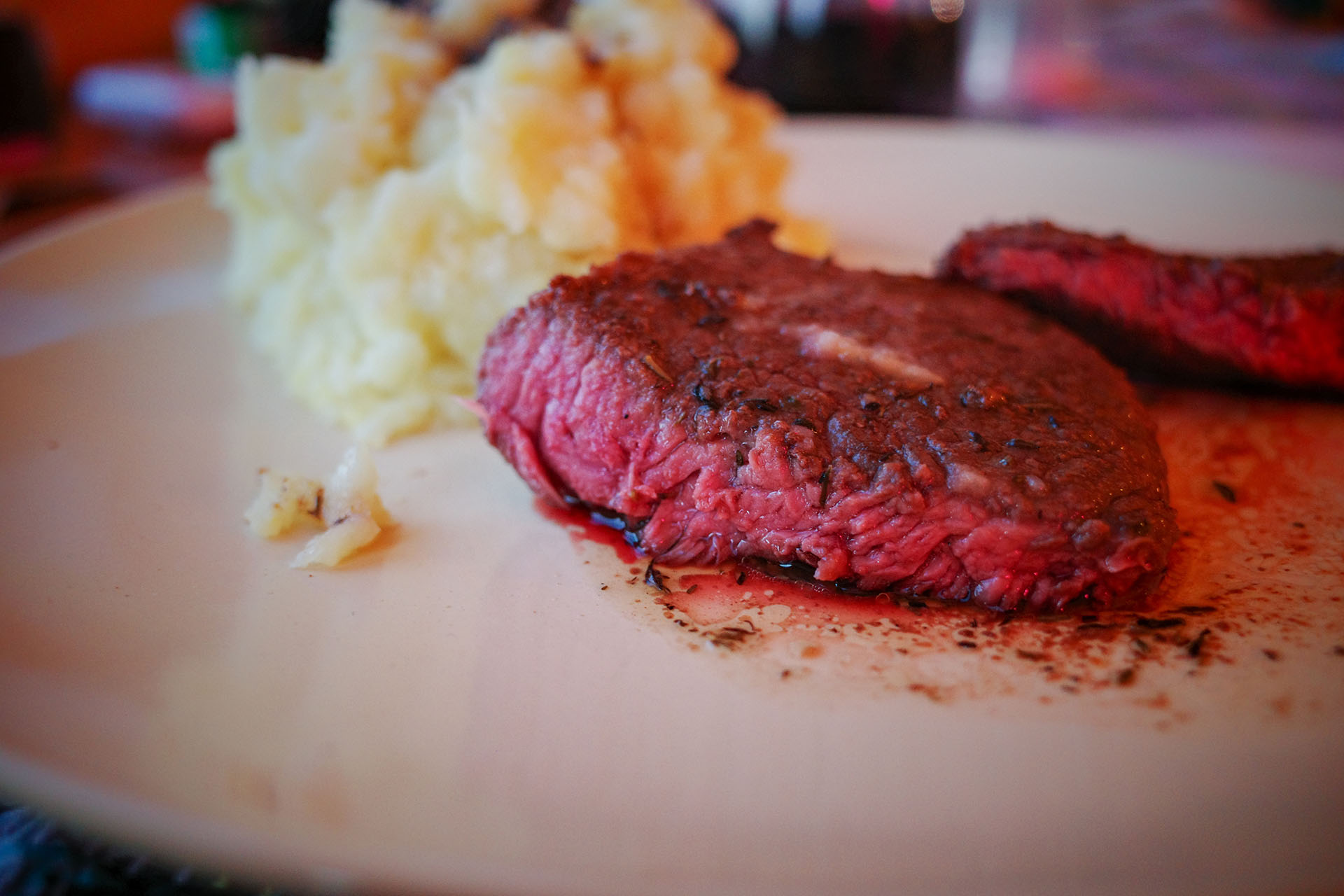 I’ve never cooked steak before, and I’m not really a big steak eater – so I was fairly pleased with how it turned out. It was cooked at 55.5C for 70 minutes, and was a bit more well done in person than it looks in the picture. I’d probably go for 54C next time. Either way, if the TCS-1000 can handle that kind of load, it left me pretty confident that it could handle a fairly heavy C41 development sesh.

Despite my bravardo in the previous section, whacking a bit of meat in a bucket and leaving it for an hour is one thing – but slotting in and improving a film development workflow with various moving parts is quite another. So how did the TCS-1000 fare when the rubber hit the road? 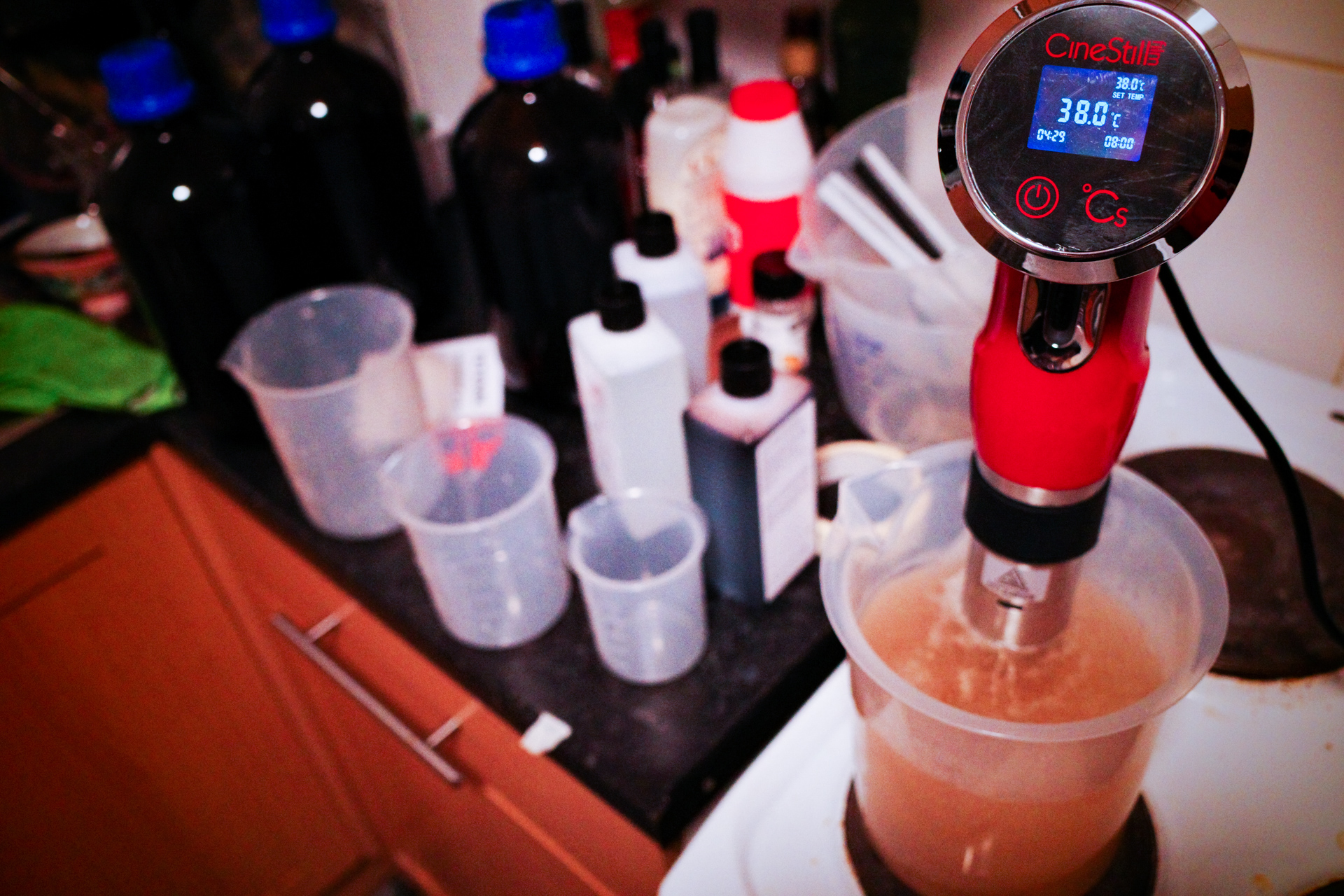 The first batch I did was two separate Paterson tanks with three medium format films, one after the other. I started with fresh C41 chemicals, which had to be mixed and brought up to temperature. Here was the workflow:

The results were good, with nice, clear negatives.

While the TCS-1000 worked great, there were a couple of things to note:

I love the TCS-1000. After many years I had gotten sick of developing colour film specifically, because getting the chemicals up to the correct temperature and keeping them there was such a chore. Now, the TCS-1000 not only lets me heat up the chemicals to exactly 38C in just a few minutes – but also easily process multiple tanks’ worth of films one after the other.

Taking out the temperature as a variable (or at least reducing it) has meant that I’ve been able to identify other variables which have had an impact on the quality of the resulting pictures, where before I would perhaps just have attributed those issues to crappy development. For example, I realised that despite having dismissed the difference using expired film made, it really does make a difference – at least with colour. Old film will often look significantly under-developed or under-blixd – even when developed at the perfect temperature etc. When I checked the stock I was using, I had films which were almost 20 years out of date, and I hadn’t adjusted anything to compensate at all. If I hadn’t been using the TCS, I would have gone on assuming that there was a problem with the chemicals or the temperature. 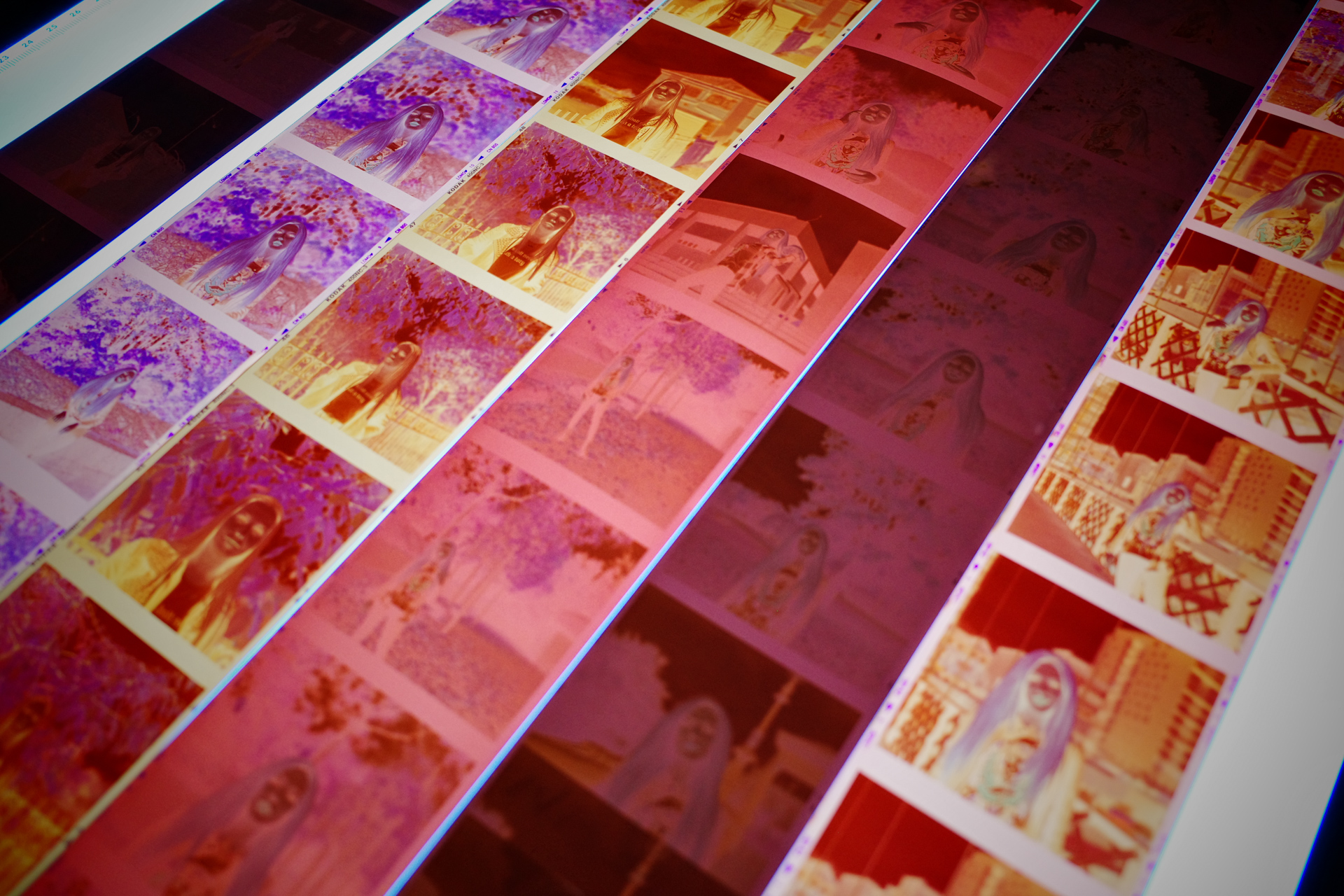 The TCS has brought a level of certainty and accuracy to the development process that I was sorely lacking, and I am honestly not really sure how I’ve gotten away with doing C41 for so long without it. The ability to quickly heat up chemicals and maintain them at a specific temperature is a god-send for efficiency… but it also opens up a whole bunch of possibilities in terms of longer stand development, which I’ve never bothered trying before.

I think I might need to buy a second one, just incase.