I’ve spent a lot of time travelling in the past few years, and have battled to find the best way to get comfortable when stuck sitting upright. A good travel pillow makes all the difference, but finding one that will actually help you get to sleep is no easy task – despite the many variations and promises that are available. As a side sleeper, I’m at a particular disadvantage, and have tried a whole bunch of different solutions. Below is my take on what I’ve tried, and which have proven to have the best bang for the buck.

Description: The horseshoe ‘U’ style pillow is the most ubiquitous; found in airport shops around the world. There are seemingly endless varieties available: from the bog standard inflatable ones, to the fancier versions with memory foam and mesh sides for ‘cooling’ purposes. I’ve tried a few over the years and never really liked them, but relatively recently I picked up a nicer memory foam version to make a decision once and for all. 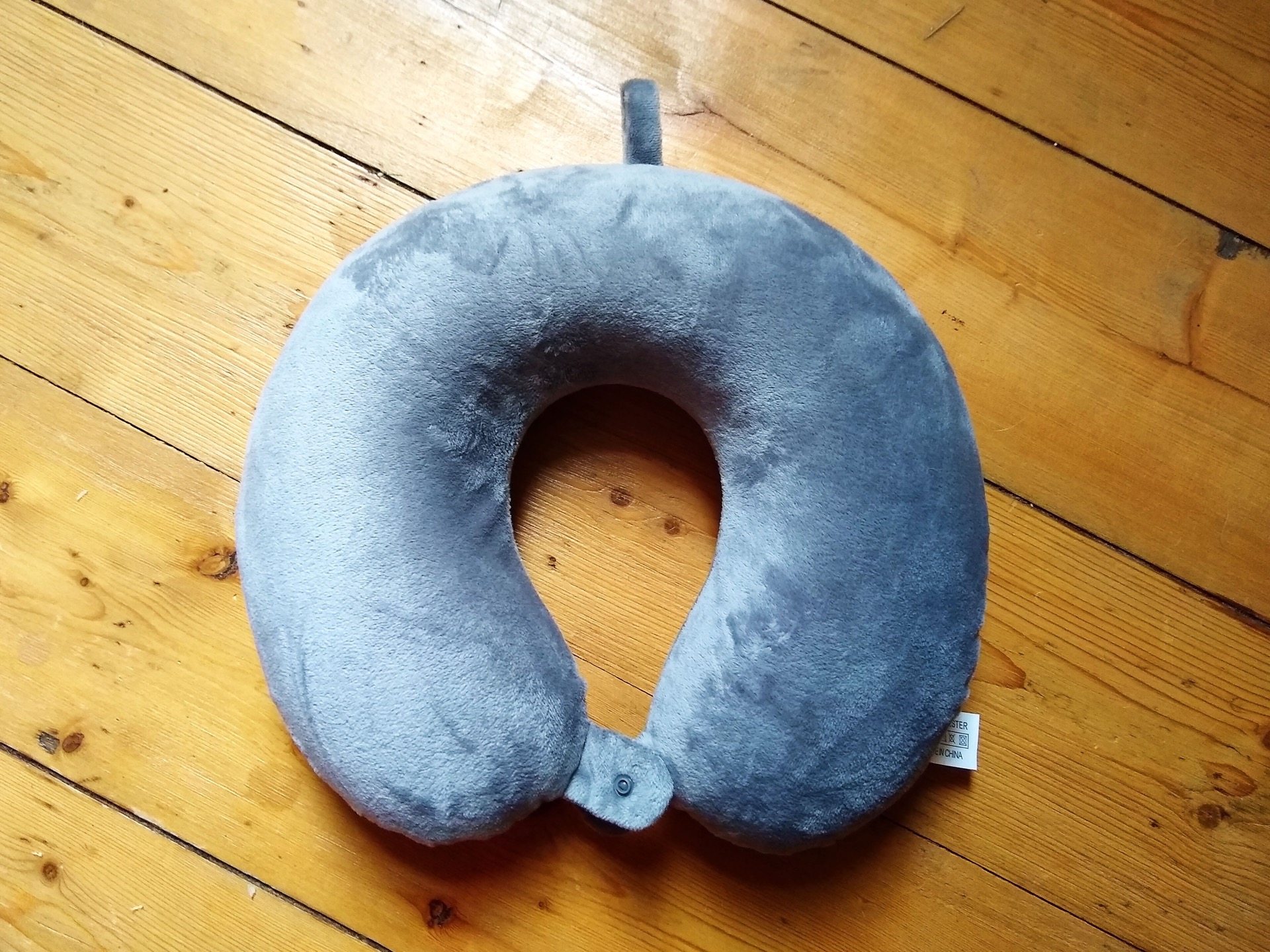 Review: I liked how soft the memory foam felt to my hands, but when I wore it round my neck on a plane, it seemed to make almost no difference whatsoever. Despite not feeling especially comfortable with the pillow on, taking it off felt even worse – meaning that I ended up caught in this sort of hellish limbo where nothing felt good any more. The material got warm quickly, and it didn’t seem to provide much in the way of support for my head. It definitely wasn’t any use for side sleeping. The design meant that I couldn’t even use it as a ‘regular pillow’. While there are plenty of variations of the horseshoe  available with different kinds of neck support etc, I found the impact of the basic ‘U’ to be so meh that I wouldn’t even bother trying the others out.

Price: Varies wildly depending on design and quality, anything from £5 upwards. I personally paid £12 for one that was (allegedly) reduced from £30.

Verdict:  I don’t really get why the horseshoe design has become the standard for travel pillows. You can spend a little for a pretty crappy pillow, or spend a lot and not have much more in the way of support. Even with a nice one, there are way better options available. Useless for side sleepers.

Description: The Ostrich Pillow is one of the more extreme options out there, and has gotten a whole bunch of media coverage as a result. You can see for yourself why… 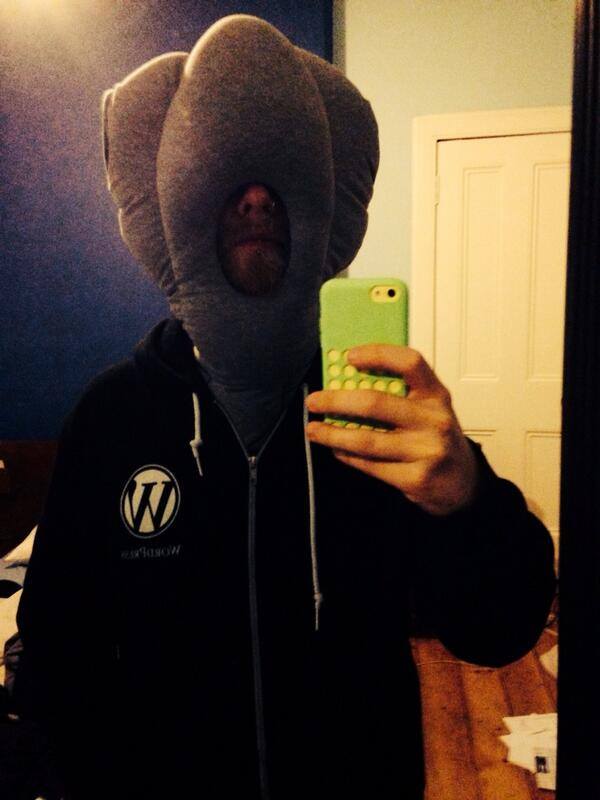 Basically, it covers your entire head like a ski mask, with padding all round to give comfort whatever position you end up in, and holes at the top for your hands if you want to sleep face down.

Review: Let’s face it, the Ostrich Pillow is ridiculous. Whipping this bad boy out on a plane journey would test the tenacity of even the most self-confident of travellers. If you ended up with a 5 star travel experience in the end, you could laugh in the face of the nay-sayers, but unfortunately this isn’t quite the case. Despite being pretty comfortable, the Ostrich is bulky – partly because of all of the micro-bead ‘padding’. As a result, it’s a bit of a pain to lug about. There’s also very little in the way of neck support, if that’s something you are looking for. The other main downside is that due to the design, you can overheat pretty quickly, which is made even worse if you have a magnificent beard that you need to squash in there. Finally, when you wear the Ostrich pillow you really need to commit to sleep, in the sense that you can’t easily just open your eyes when you are half asleep if the attendants come round to offer you a drink. Pulling the whole thing off can be a bit of a pain, and whilst some folk may like the idea of being totally cut off and undisturbed, it wasn’t really what I was after.

Verdict: The Ostrich Pillow is a cool idea, and pretty comfortable – but was too bulky and impractical, especially at its high price point. I ended up getting rid of mine when one of the seams burst.

Description: After the original Ostrich Pillow got so much press coverage, Studio Banana Things came up with a smaller version for those who wanted something a bit more, eh… subtle. The Ostrich Pillow Light.

I didn’t get a picture of mine over the time I was using it, so here is the manufacturer’s promo shot: As you can see, the pillow is a divisioned ring filled with micro-beads, which comes with a drawstring to tighten as desired. It is designed to be used in a variety of ways, including around as neck support; around the head for sleeping face down on desks; or lent against a wall/other surface.

Review: I thought the Ostrich Pillow Light would be the answer to my prayers, but I found it to be pretty useless for its main intended purposes. It wasn’t big enough to provide any real meaningful support to the neck, and sleeping with it around my head felt both unnatural, and not especially comfortable. In the end I used it flat behind my neck for a bit of added comfort on flights, and I did end up travelling with it a lot since it was so soft and portable, but I often found myself wishing it had a bit more filling. I eventually had to part ways with it when the seams burst and the micro-bead contents began to leak out. Something that seems to be a common flaw with this kind of material.

Verdict: Very soft and portable. Good as a general use pillow, but doesn’t really address any particular use case that a cheaper alternative wouldn’t. Wearing it round the neck was useless, and round the head felt weird and uncomfortable. Burst after moderate use. Less expensive than its larger cousin, but there are better options available for the price.

Description: The Travel Roll from XpresSpa is made up of different ‘sections’ which zip together to form a hollow roll, designed to be used as general purpose pillow or travel ‘stand’. 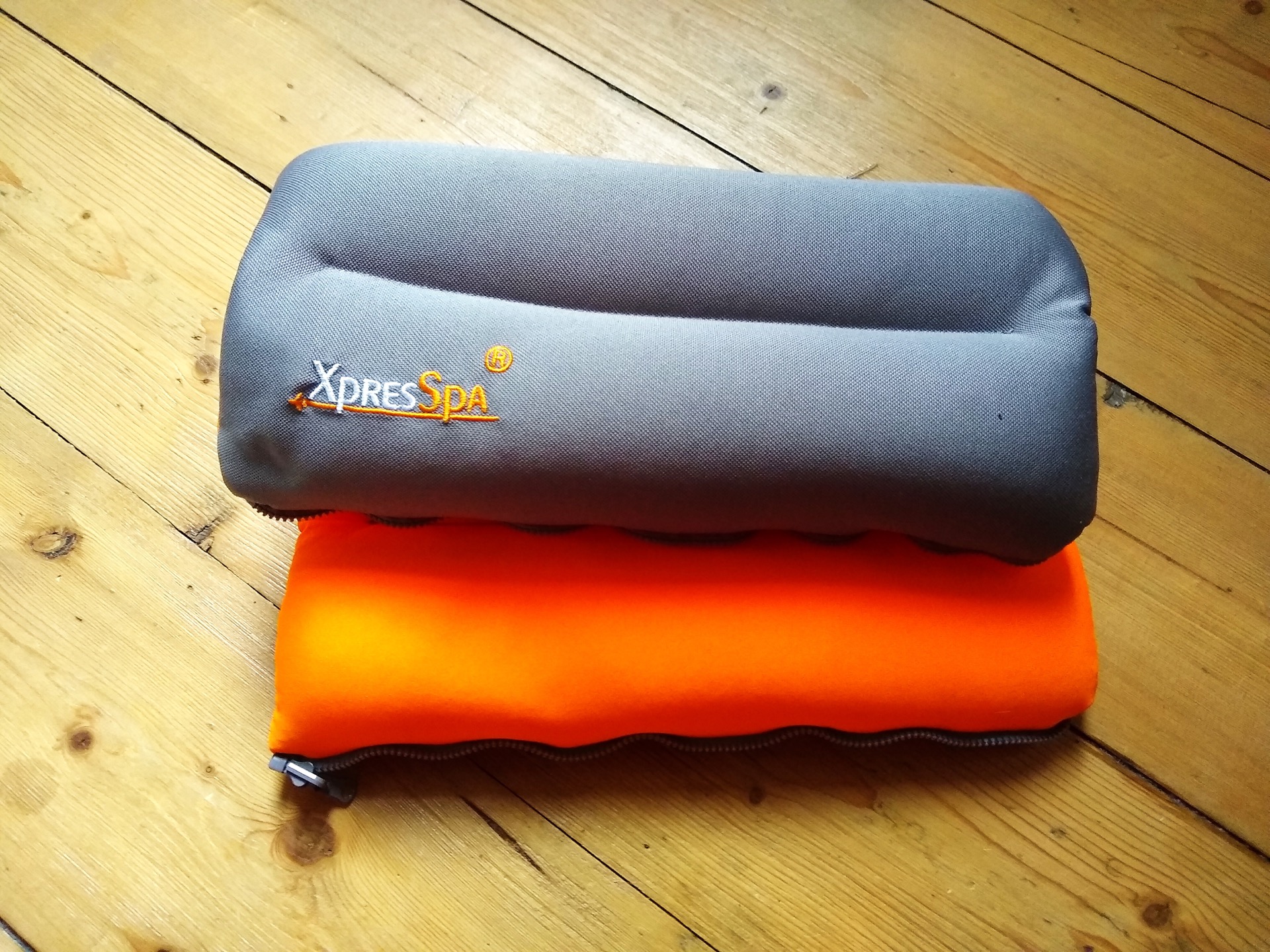 Review: I picked up a Travel Roll on a trip where I accidentally left my main travel pillow in my checked baggage, thinking that it looked a bit more interesting than the other options available. It immediately seemed to be very useful when we were stuck in the airport for a few hours, providing a good amount of comfort and support when slouching in the waiting room. I really liked that it could be unzipped to change its shape, or kept as a tunnel to place your arms through and sleep bent over on the plane’s pull-out table. However… it quickly became obvious that it was simply too bulky to be used comfortably behind your head in the tight confines of an airline seat. I ended up using it mostly as a stand for my iPad – which was useful, but not really a purpose that would justify carrying it on long journeys.

Verdict: The Travel Roll is a clever general purpose pillow which has a bunch of different configurations, but which is way too bulky for carrying about, and doesn’t really fit well behind your head on a plane. Great for other purposes like camping or car journeys, but not really for flights.

Description: The JetRest travel ‘cushion’ is a pillow designed specifically for side sleepers. It has a thin section which goes behind your head, and a larger section which supports the side of your head. It has a removable cover which lets you wash it between uses, and it has a velcro strip to fold it up into a more compact size. 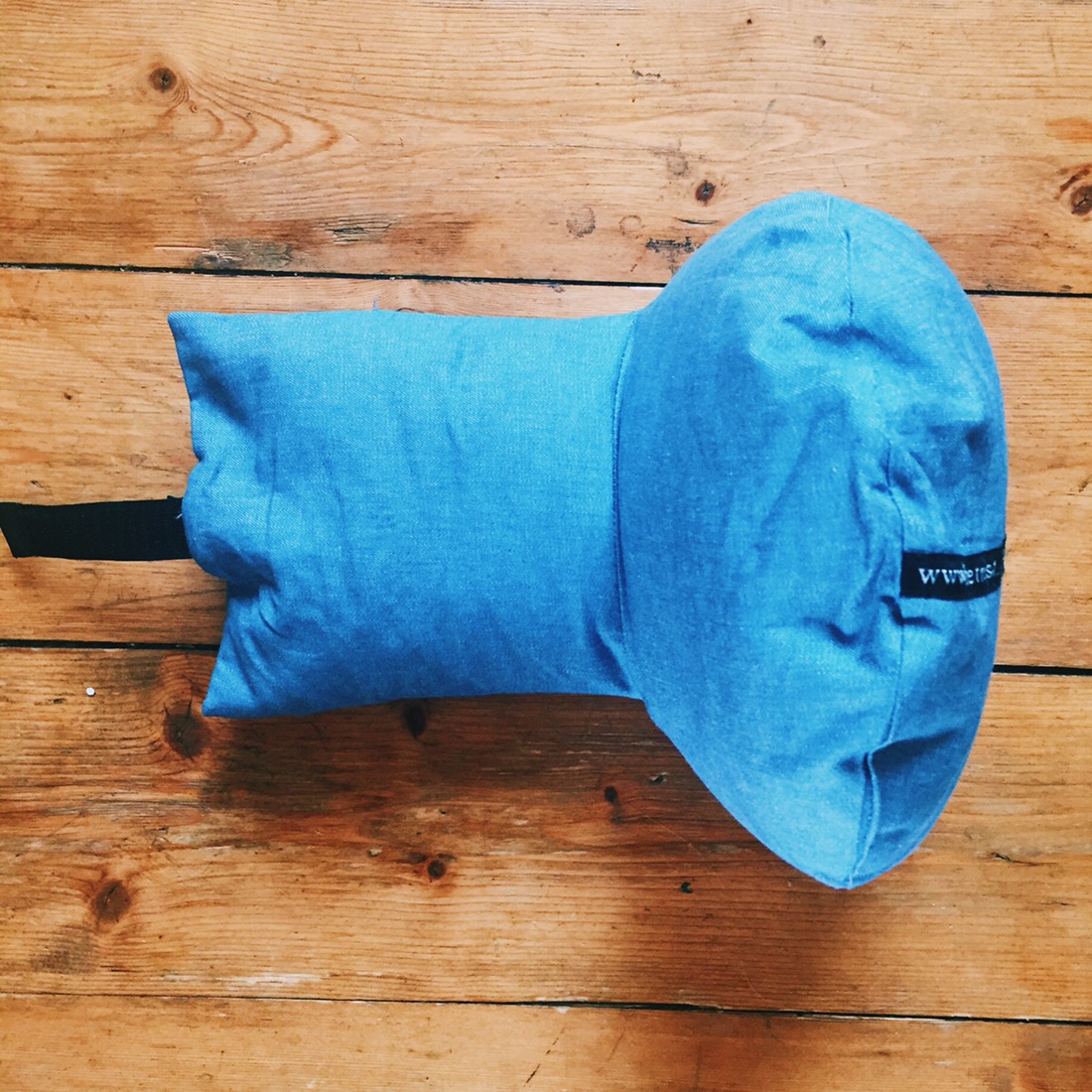 Review: I was pretty dubious about the JetRest when I first saw it online. It didn’t seem like it could possibly give enough support to let you get to sleep. However, somehow it actually pulls it off quite nicely. The pillow is very comfortable, and can be flipped round to different angles if you want to sleep in different positions. It’s small, and the velcro lets you fold the entire thing round the handle of a backpack, making it nice and portable. I do sometimes find myself wishing that the rear section was a bit longer or slightly thicker to give a bit more support, but it isn’t a major complaint.

Price: £15, with a buy-one-get-one-free offer from the manufacturer (!)

Verdict: Comfortable, compact, and perfect for side sleepers.

Description: The J-Pillow has a rather unique three prong design which is meant to support your head in such a way that lets you sleep without jerking to the side. In other words, it should be great for side sleepers. 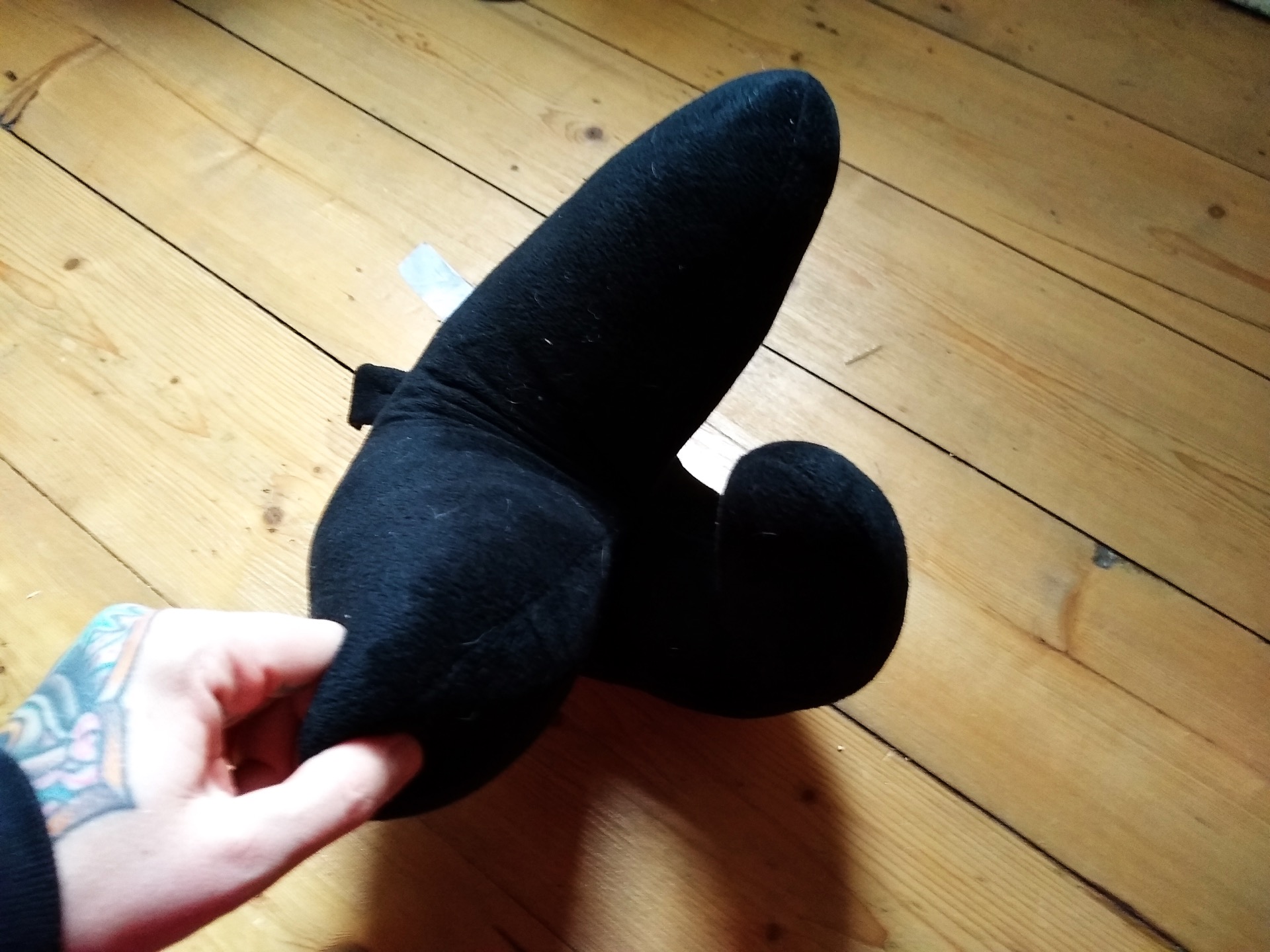 Review: The J-Pillow is pretty clever, though working out how it is supposed to be used can be a bit confusing. That said, in practice there are a variety of positions which support your neck and head in different ways which is good. It is pretty comfortable, but the design could feel a bit too structured and over-engineered at times, rather than a natural way to fall asleep. The one major down side for me is its size, in that it doesn’t squash or roll down particularly well. it does come with a snap-loop to attach to your bag which is nice, but that still leaves it dangling about, and unfortunately mine broke after fairly light use.

Price: The official J-Pillow costs £25, though there are some cheaper versions available.

Verdict: I liked the J-Pillow a fair bit, but in the end it was just a bit too bulky to be an endgame solution.

While the J-Pillow was pretty good, the clear winner for me was the JetRest. It is lightweight, comfortable, and easy to travel with. It could potentially do with a bit more support at times, but realistically it is the pillow that I have most frequently returned to over the past few years – and is also one of the cheapest. If you’re a side sleeper, you aren’t going to get much better than this.